Erisnyx  decided to join the challenge as she was posting all of the things she tatted as Valentine 's gifts. An edging from A Tatter's Workbook by A. Tatter done in in Lizbeth size 20, #657 and #603 was modified into a bookmark. This cute bear came from the book Tatted Animals by Inga Madsen and was done in size 10 thread and it was her first attempt at using a visual pattern. The dolphin was also done in size 10 thread using Jane's pattern. The Heart Frame, from Tatting Hearts by Teri Dusenbury is done in a very red size 10 thread. The tatted flowers are the design from the centre of the tatted bear. This last one is a tatted griffin using her own design because she couldn't find one already done. 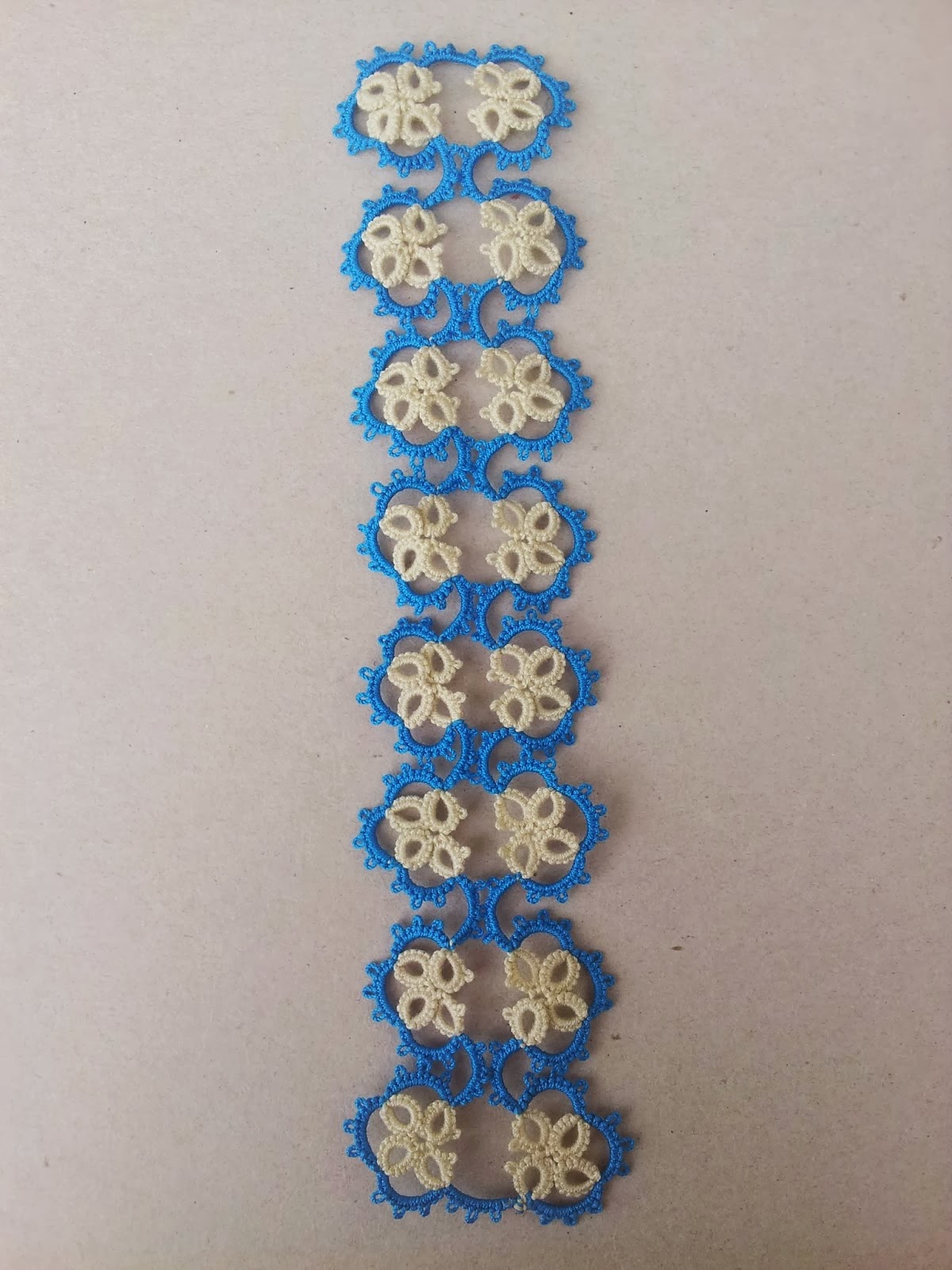 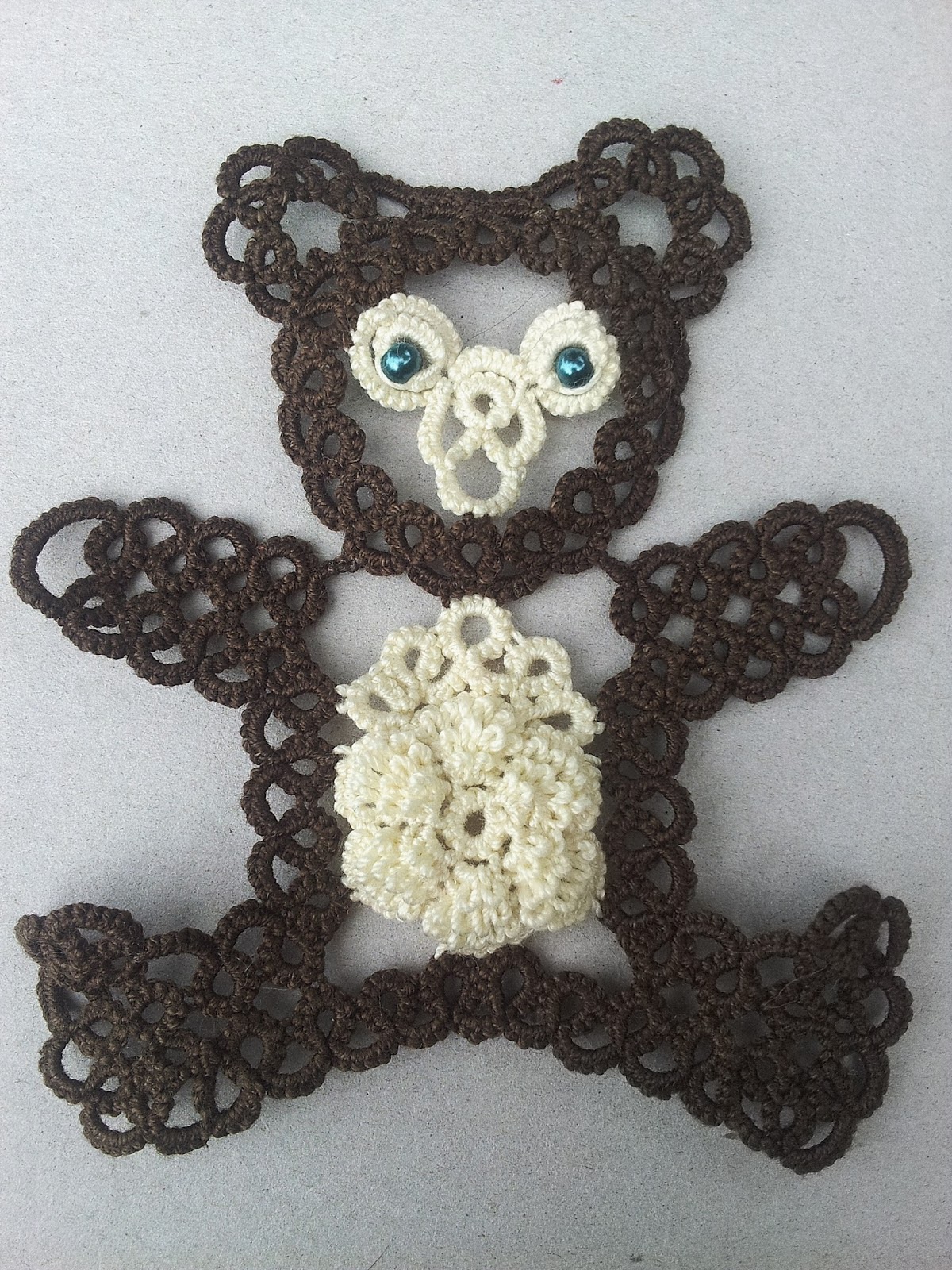 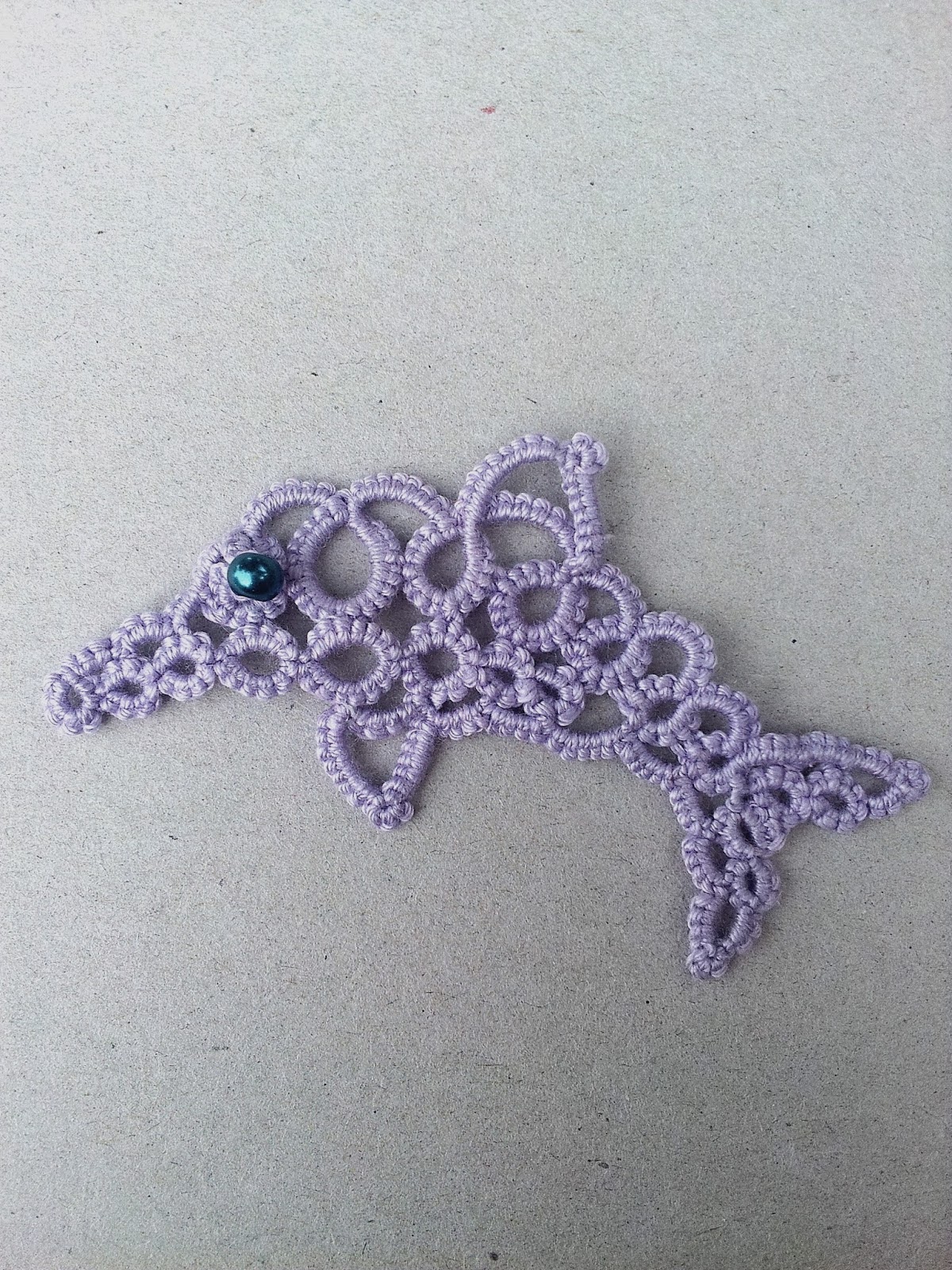 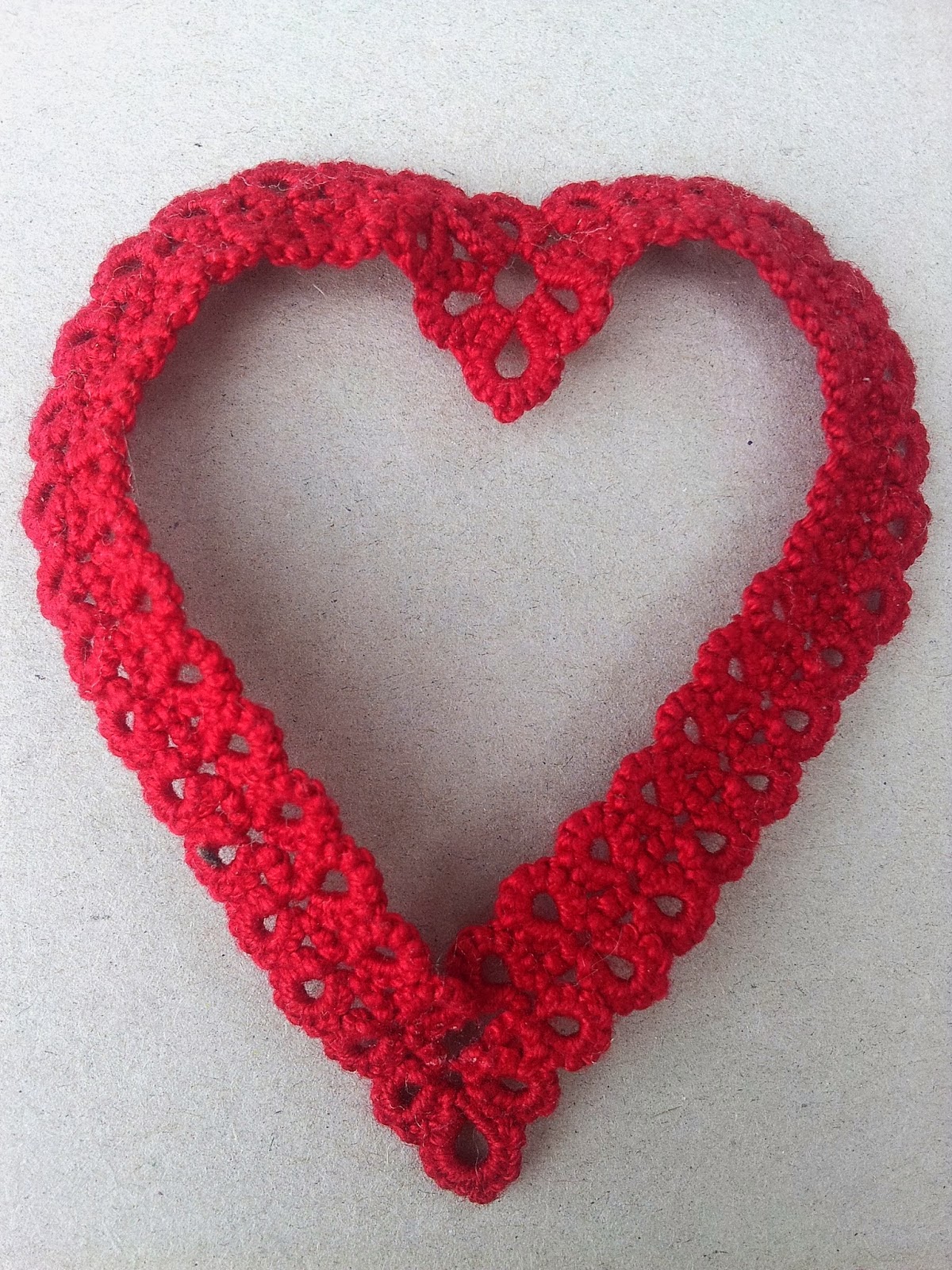 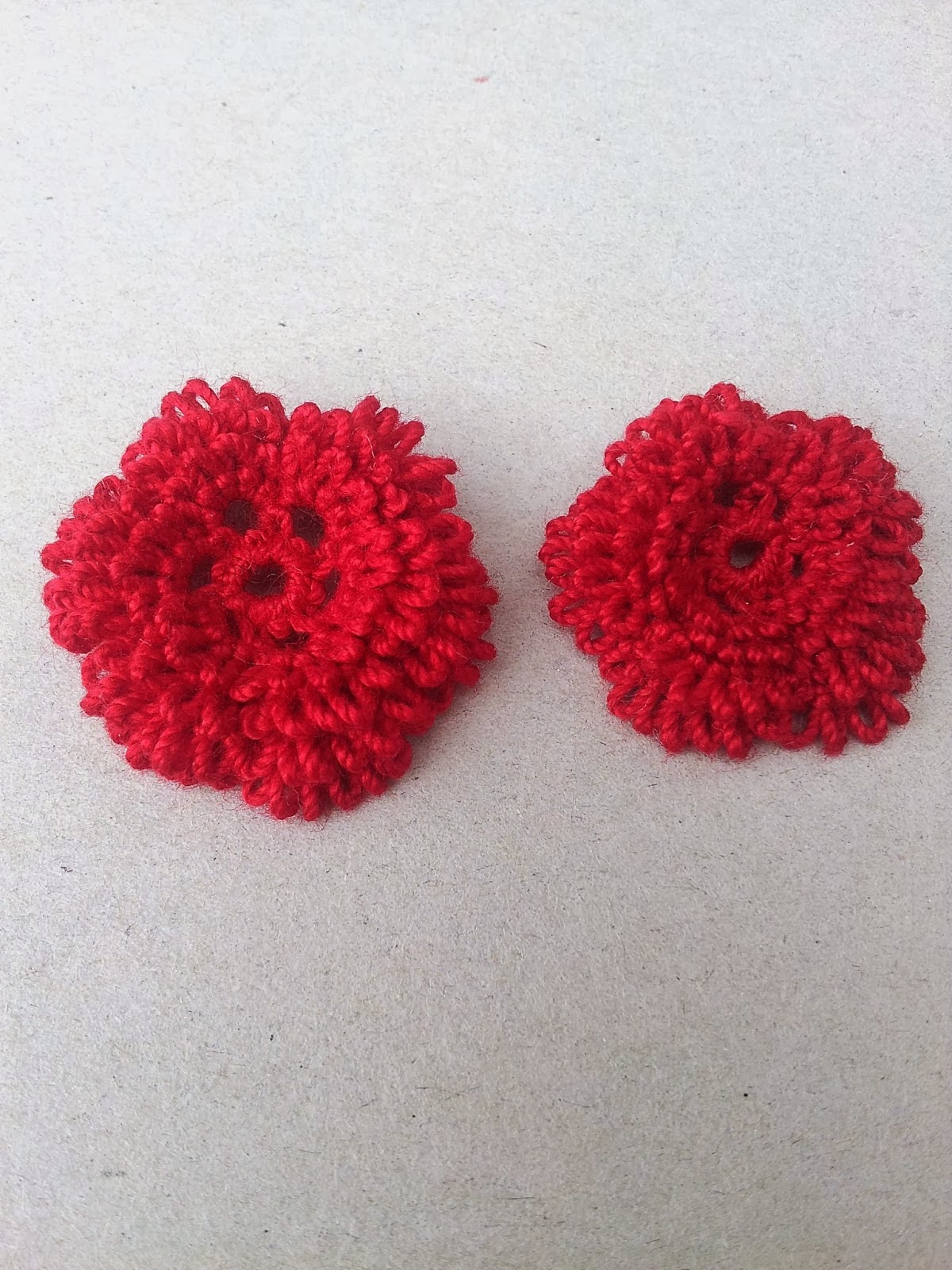 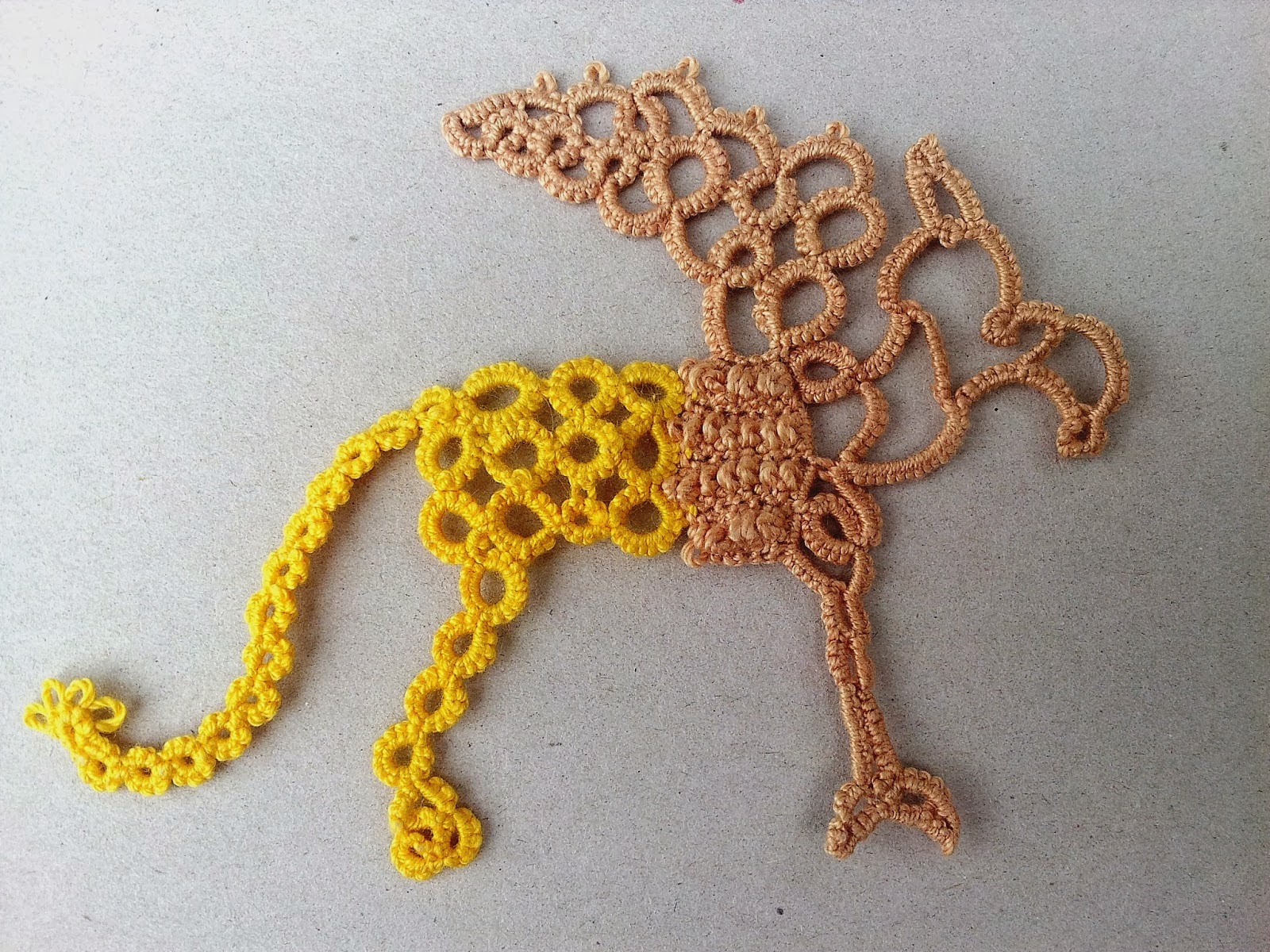 Lilas enjoys tatting and beads and playing with lace. She finished a necklace for Valentine's day and now she's working on a design for another one. 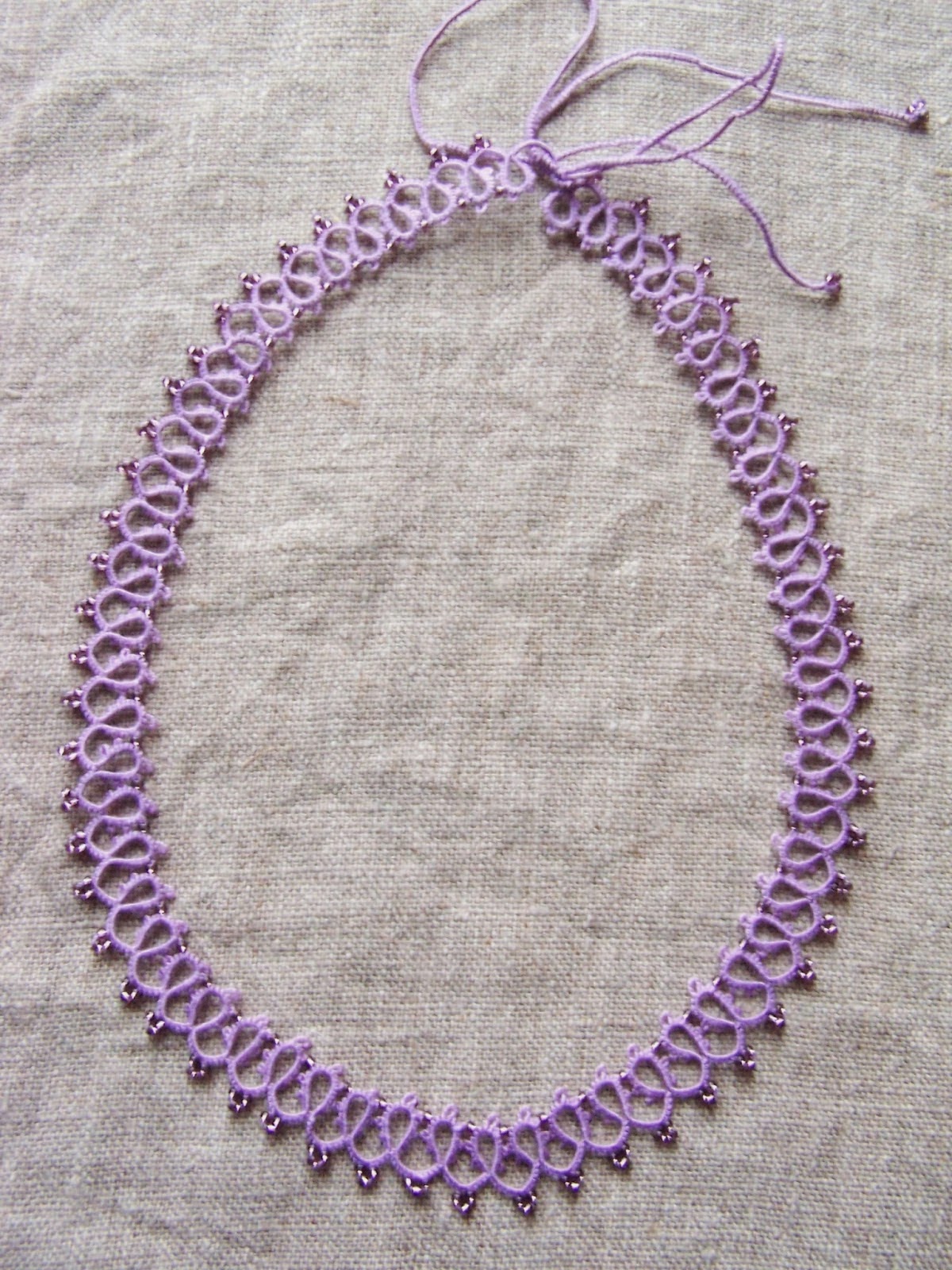 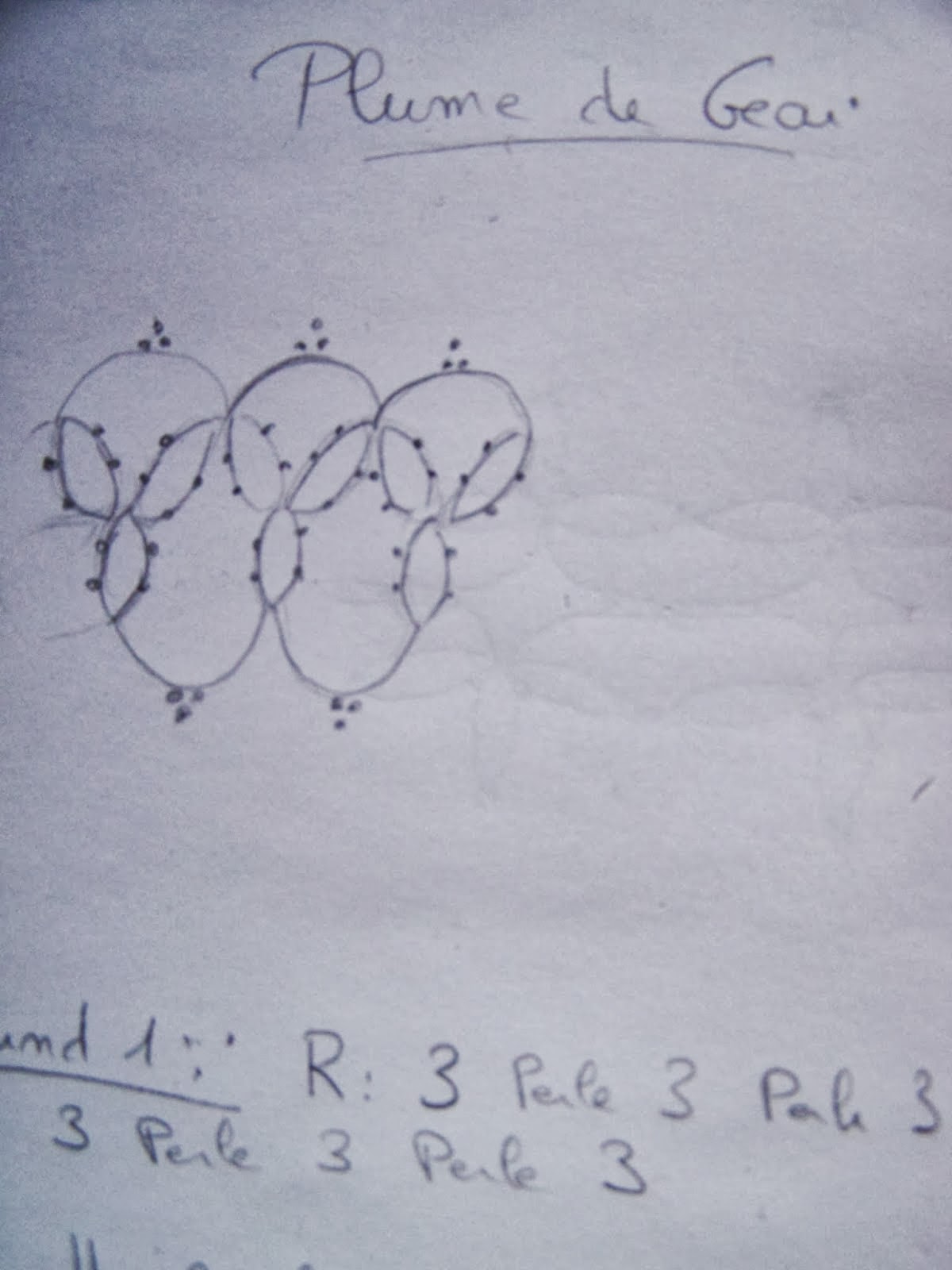 Stephanie finished the third round of Renulek's spring doily and is looking forward to the next row. The little shuttle-shaped medallion  is an oval medallion by Norma Benporath.  She wanted to make a flower, leaves, and a border, so she used vintage tatting thread with leaves in Sulky Cotton Blendables #12-wt and an outer edge in Sulky Blendables #12-wt colour 4032 Iris. She did the design again using the Online tatting class tips for doing it in one go using Sulky Blendables #12-wt, colour 4031 Country Colonial. Then she started another one using the thread on the shuttles and used an SCMR with a floating ring and concluded that the method used to complete the design depends on the preferred technique of the tatter. She prefers the look of her original 3 colour, cut and tie, version best. The final section of the TIAS is done with Perfect Quilter 17-wt Volcano colour for the sails and Sulky #12-wt quilting thread in green for the rest of the ship. 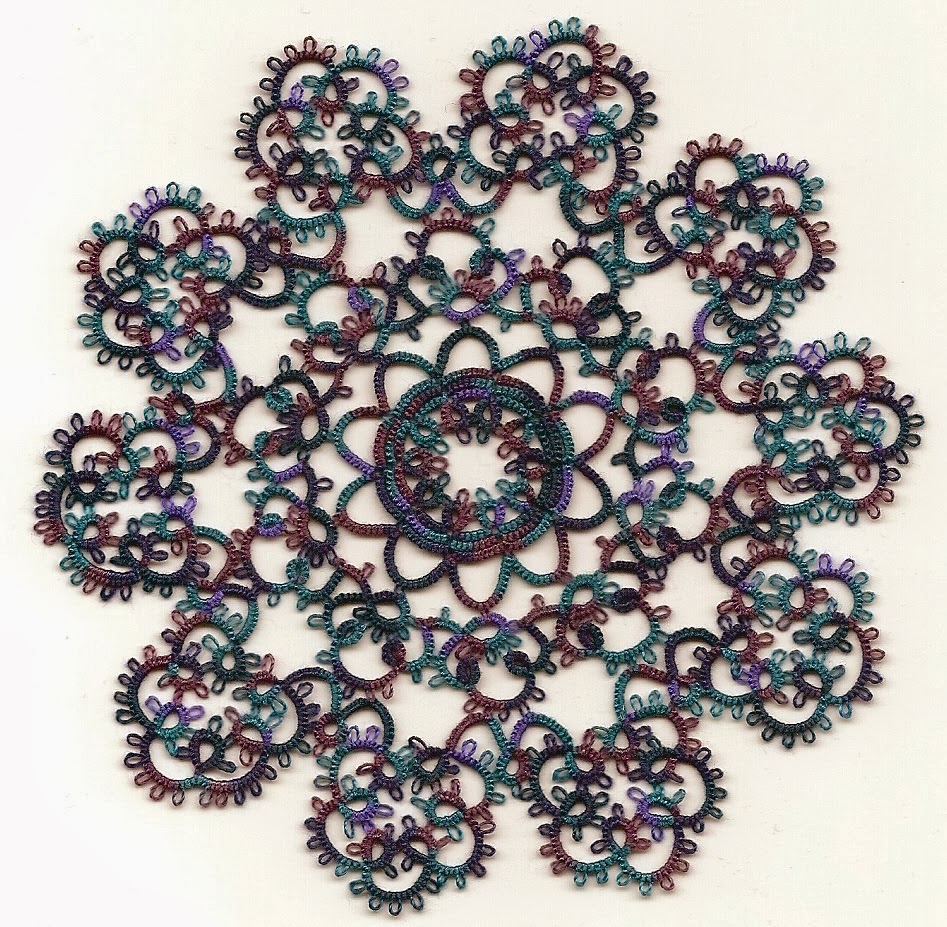 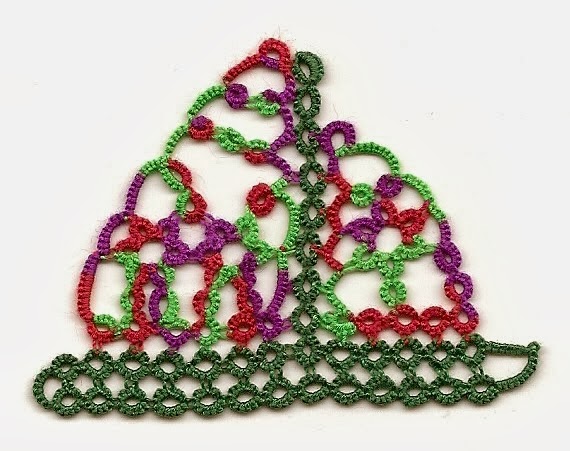 Sue shows us what she has been tatting in between Jane's TIAS. TIAS is almost there. 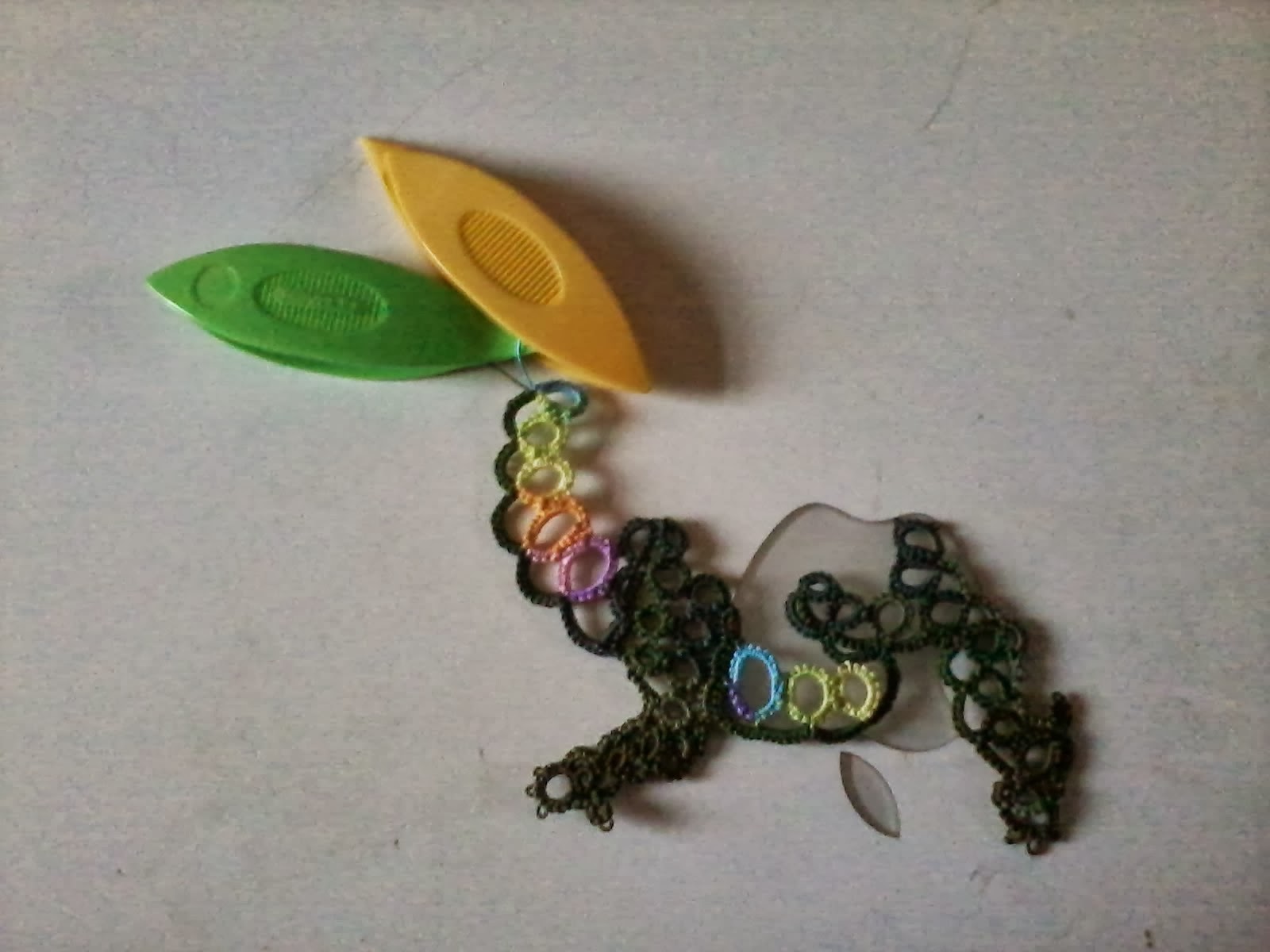 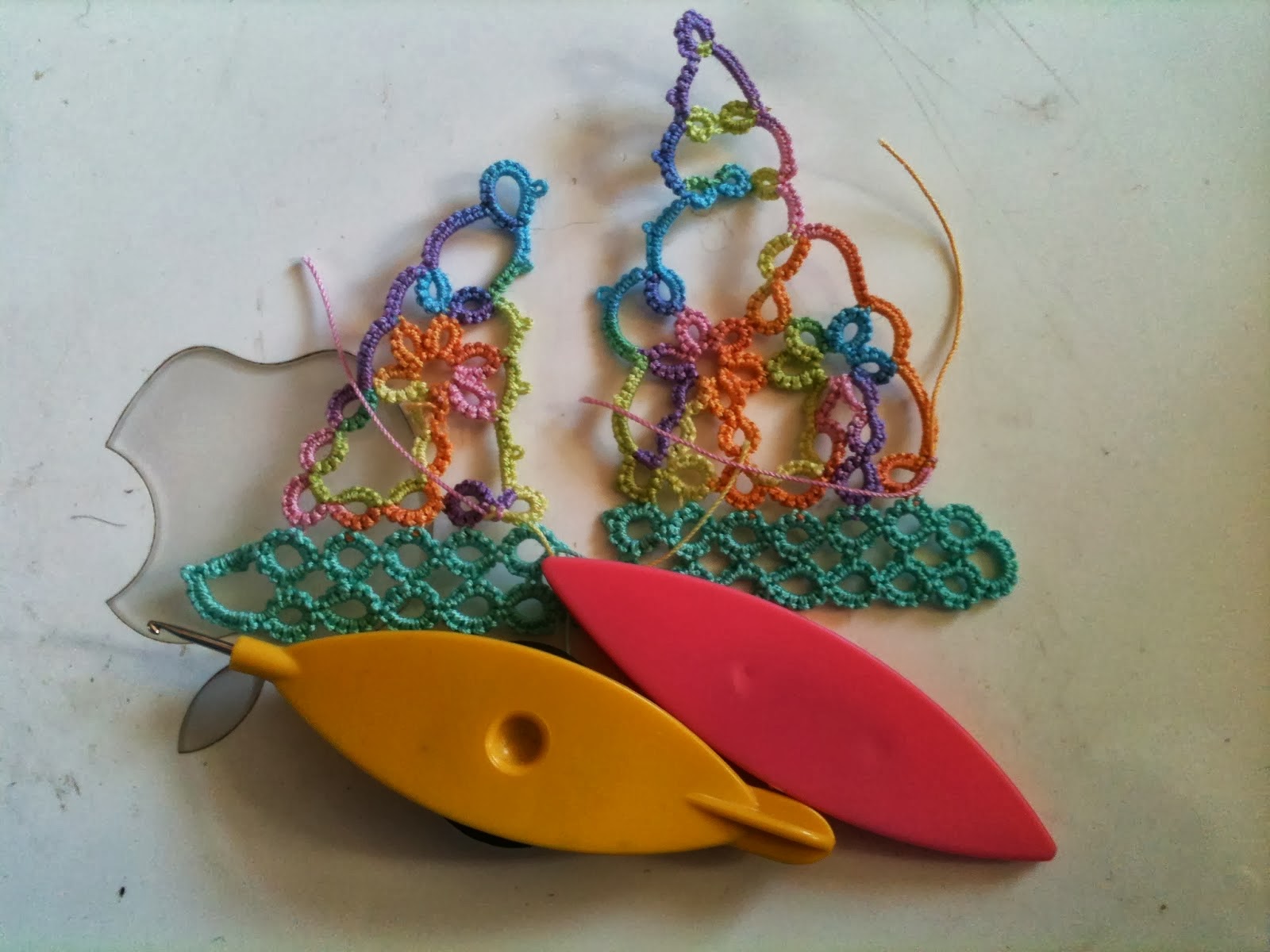 Claire has TIAS day 14 done and it's looking remarkably like a sailboat. For her "heart a month" project she tatted the Peacock heart by Birgit. Day 15 of TIAS just needs a mast for the sailboat. 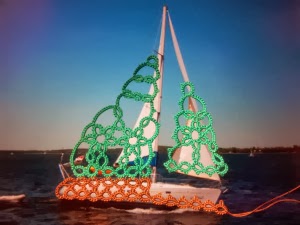 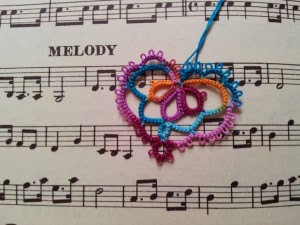 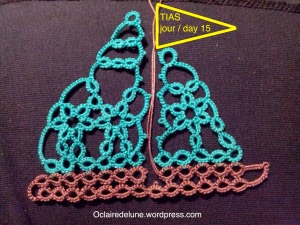 Cigdem created this necklace she calls Victorian Diva by combining several different motifs and bead dangles in Altin Basak polyester thread with several sizes of crystals and silver lined clear seed beads. (I love the look of silver lined beads, but am always devastated when the bead go dark as the silver tarnishes.) 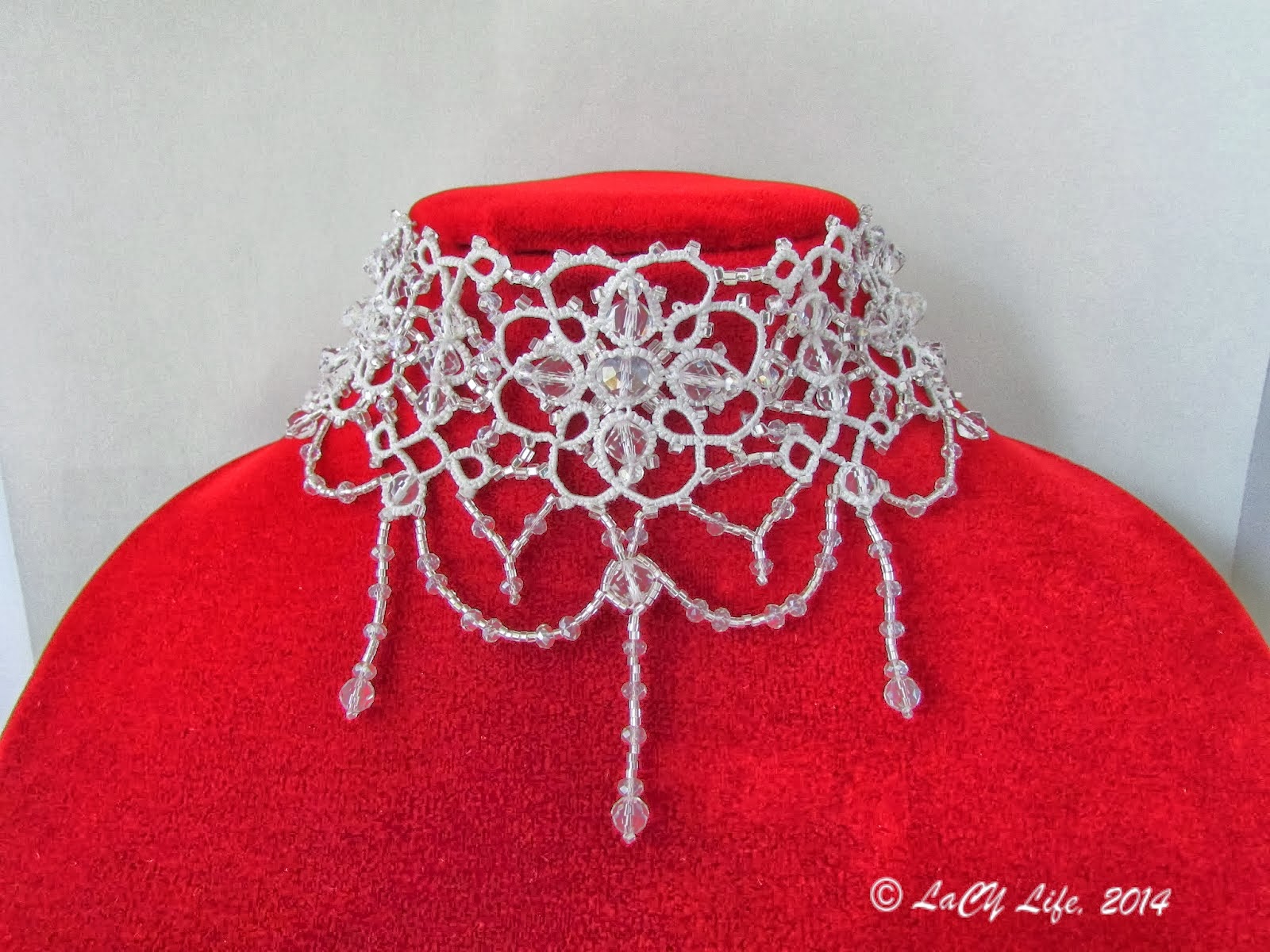 Diane's new tatters are doing well and the incentive of tatted motifs is certainly helping. A runaway ball of thread results in a collaborative effort in rewinding. Denise stopped by the school and dropped off butterflies and necklaces for the kids which they were thrilled with. They'll be even more excited about the goodies that Miranda sent for them. 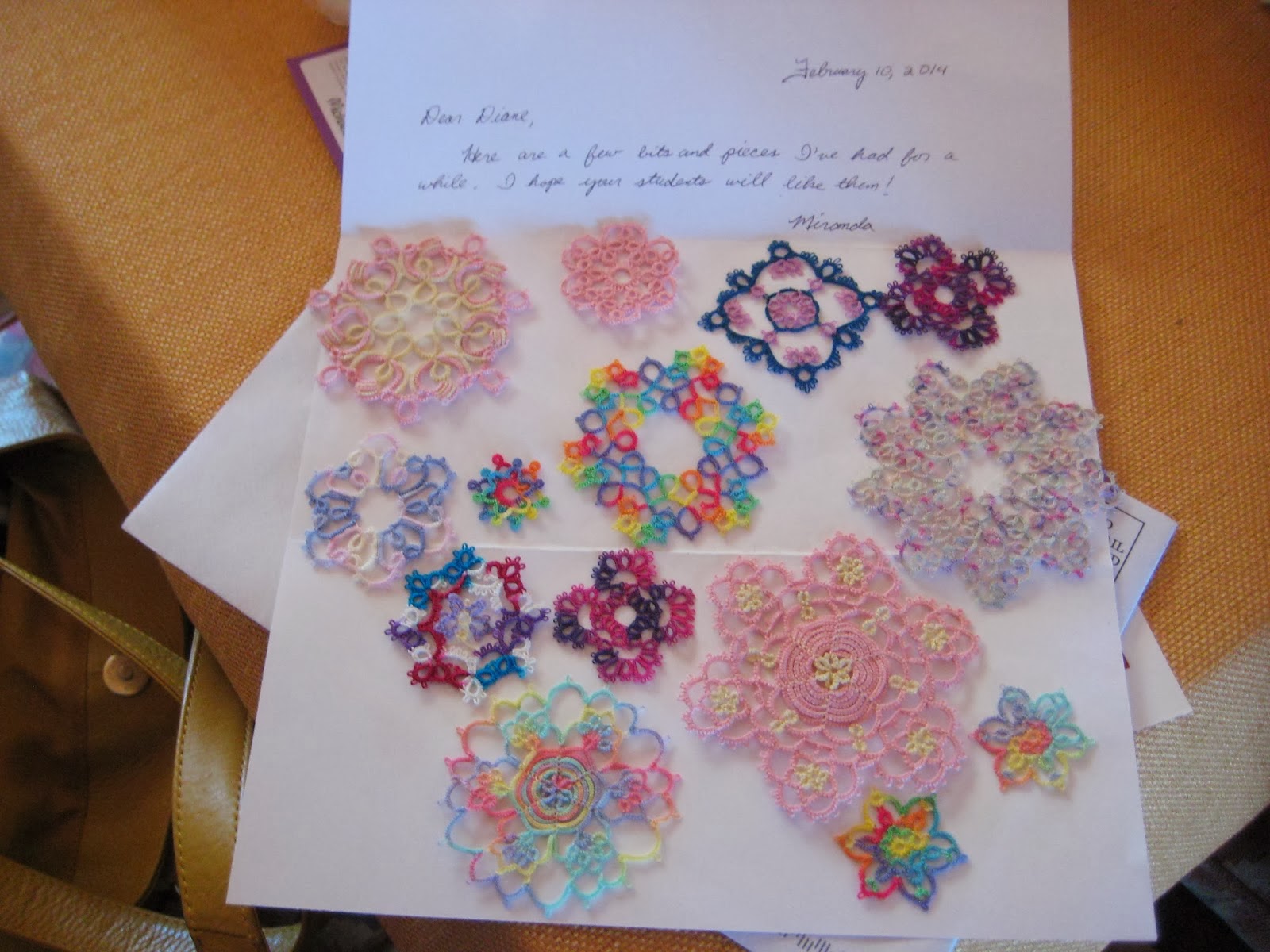 Fox had to choose another colour of thread and nothing seemed to work until she added beads between as a buffer, so now she's zipping right along again. The Spring Napkin, designed by Renulek is being worked in size 80 Lizbeth, which she thought might be too fine, but it's easier to work with than the Perfect Quilter or the Sulky Blendables she has been using. TIAS has turned out to be a sailboat. 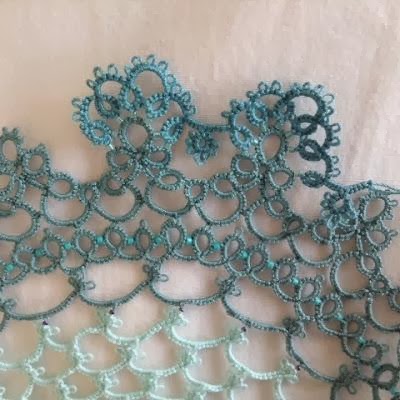 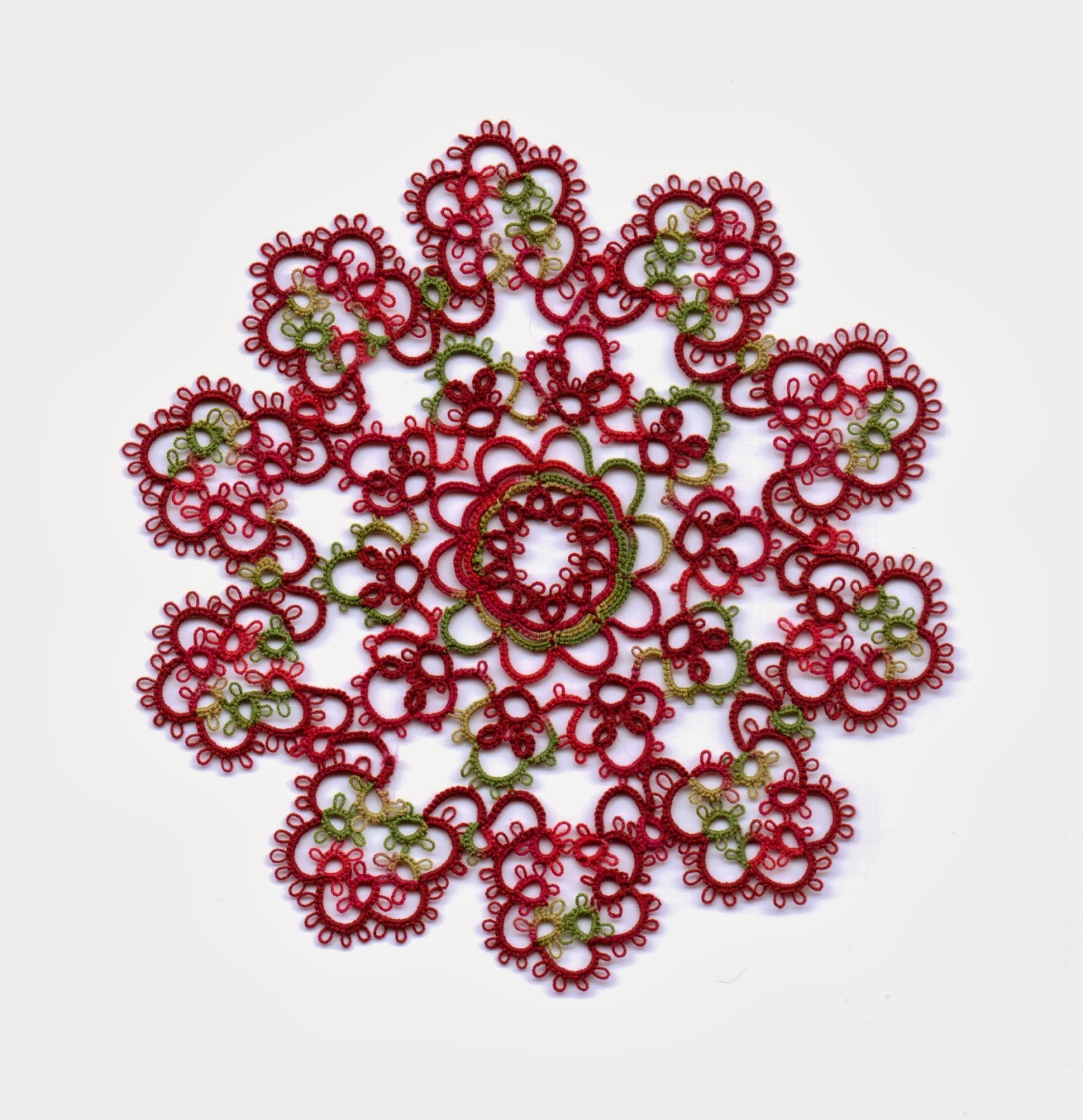 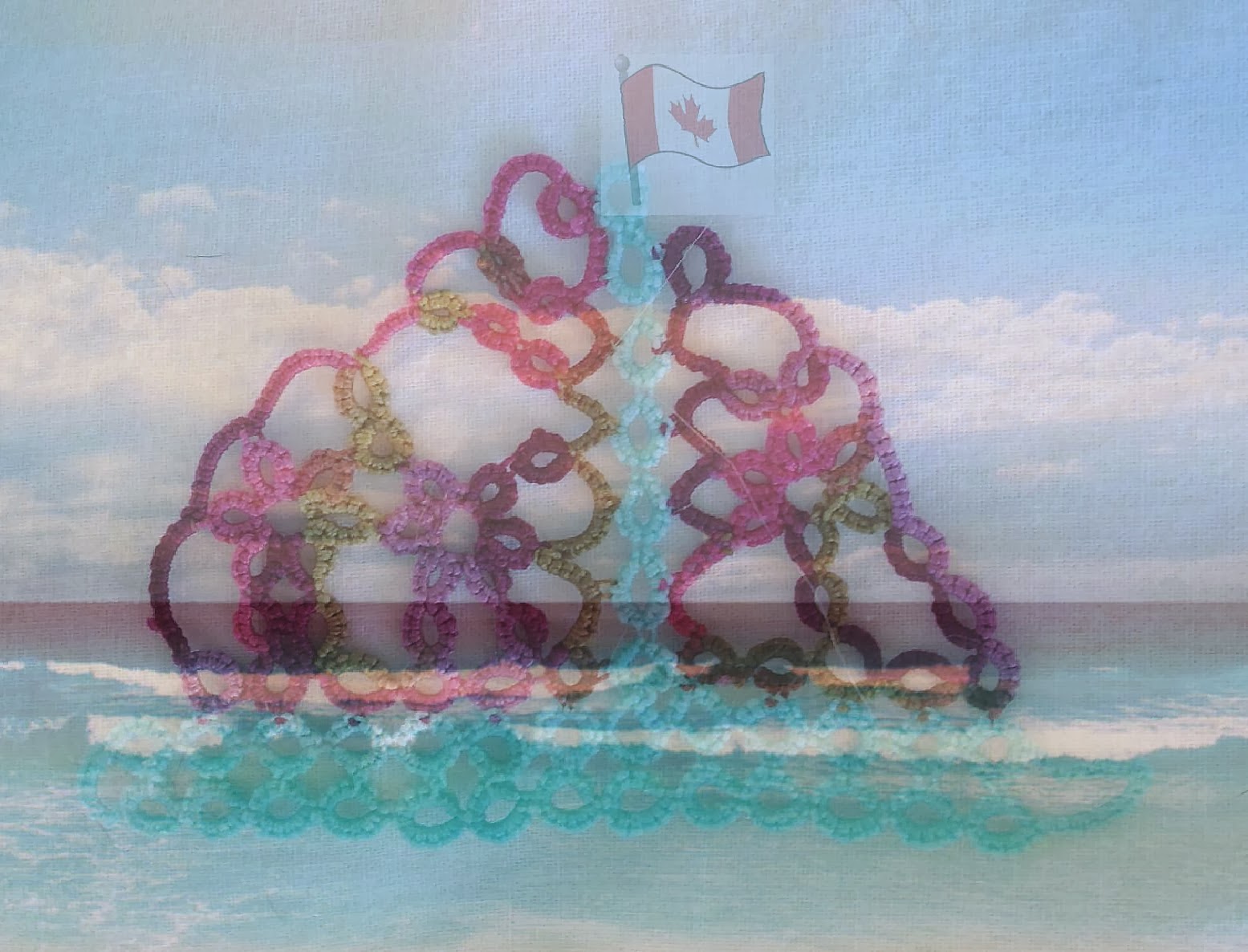 Kristen has day 13 and 14 of TIAS done. Day 15 of TIAS is looking like a sailboat. She's using her new balls of size 80 thread to start a doily project, but it's tiny. 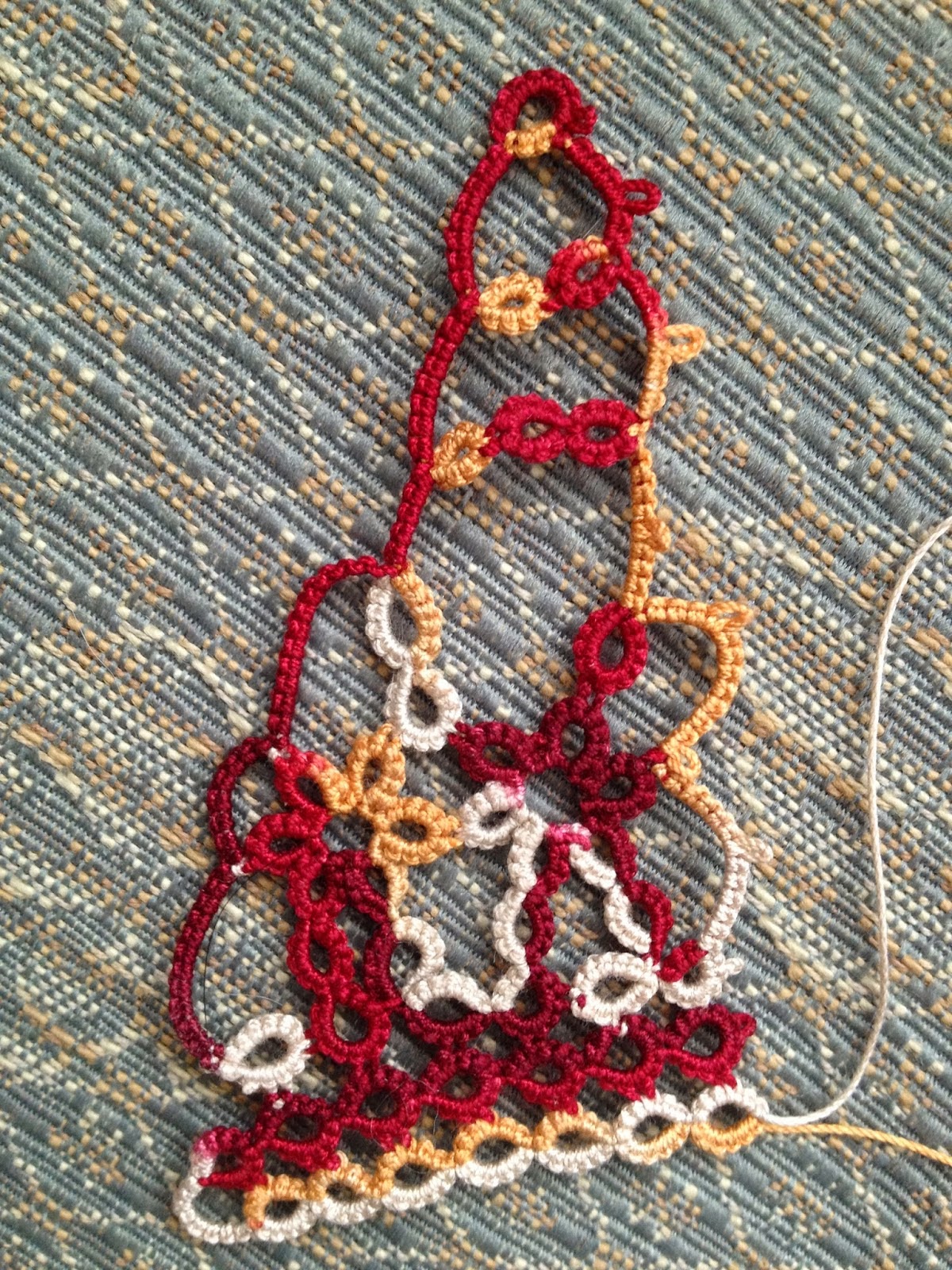 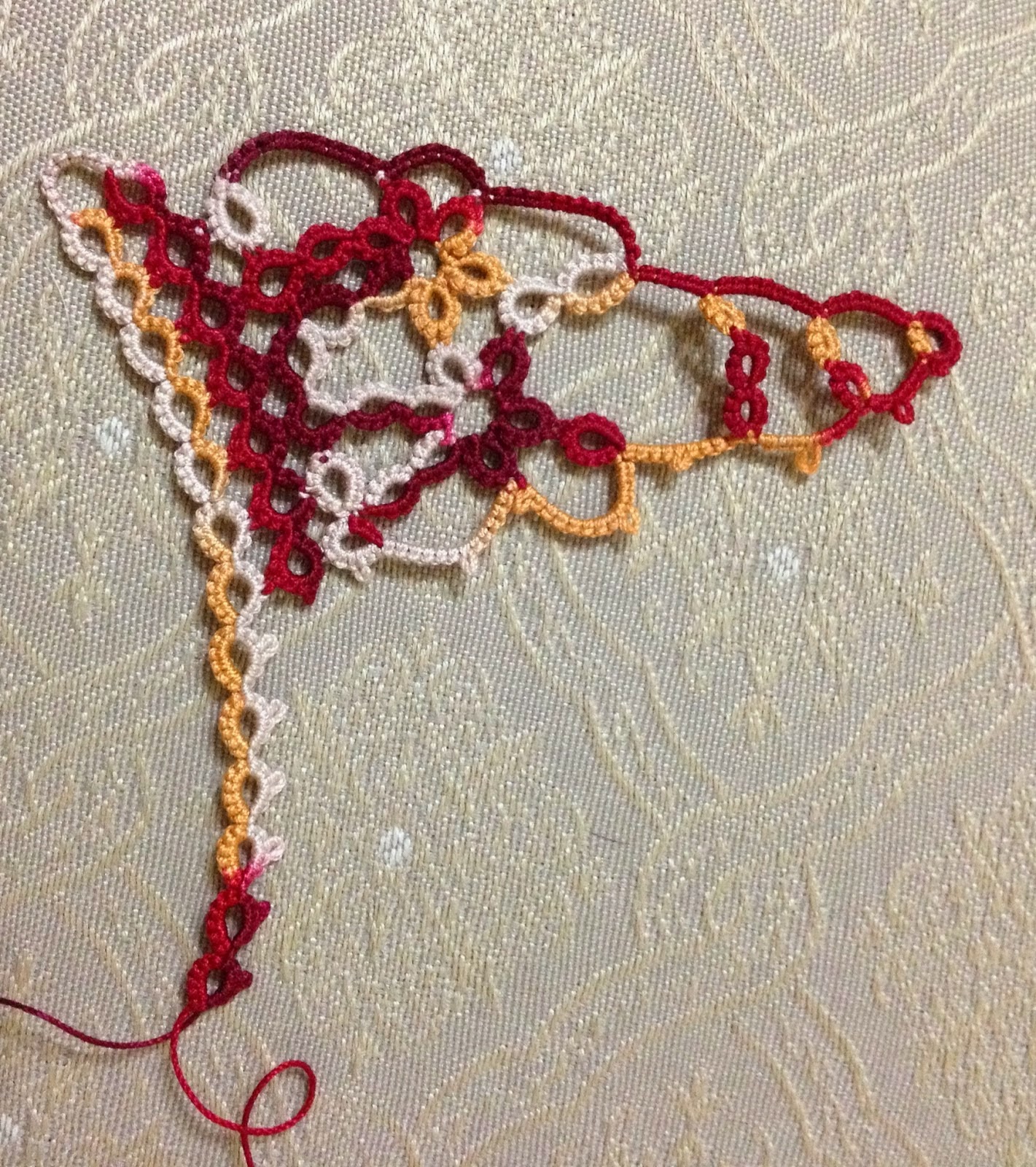 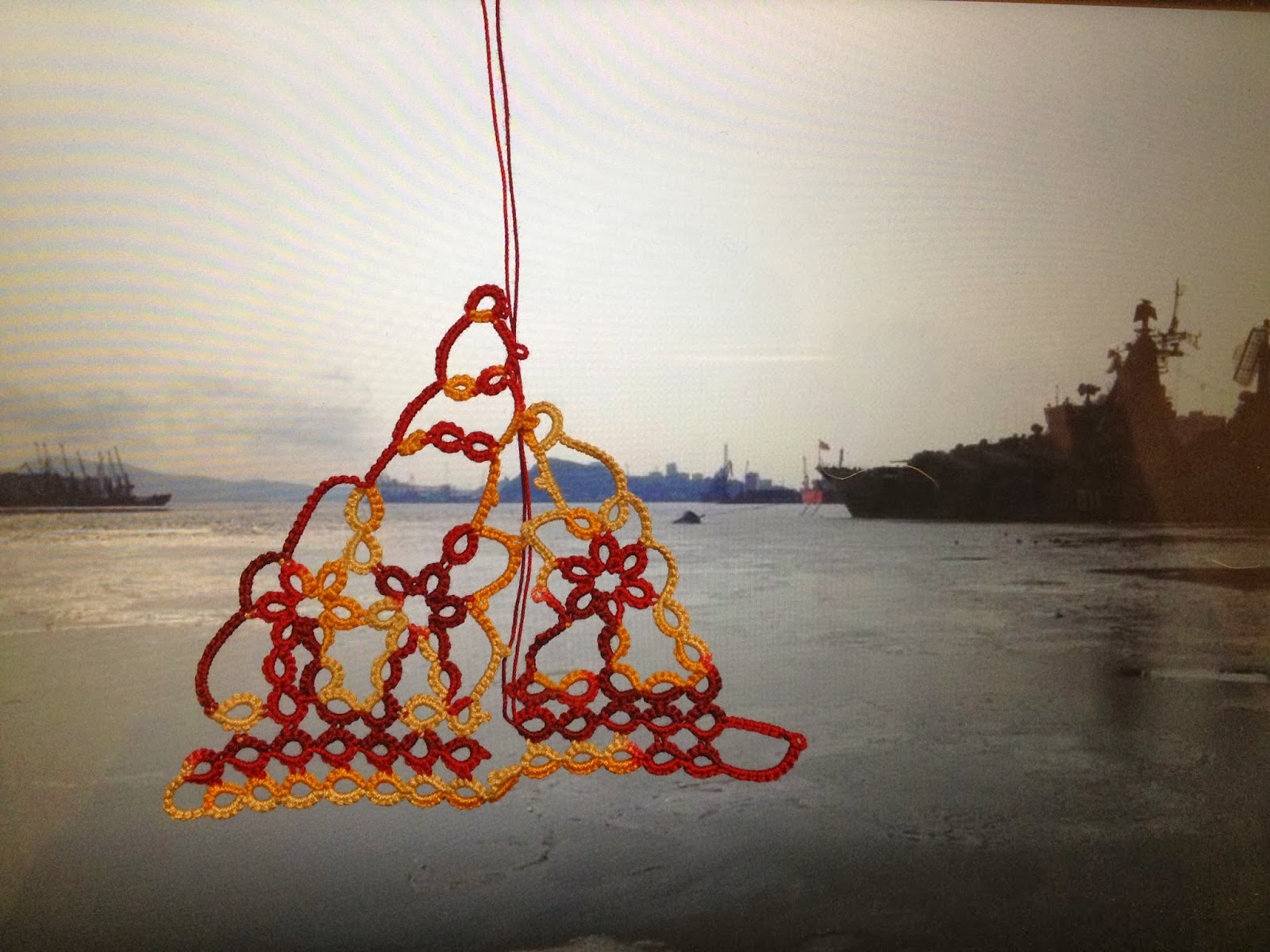 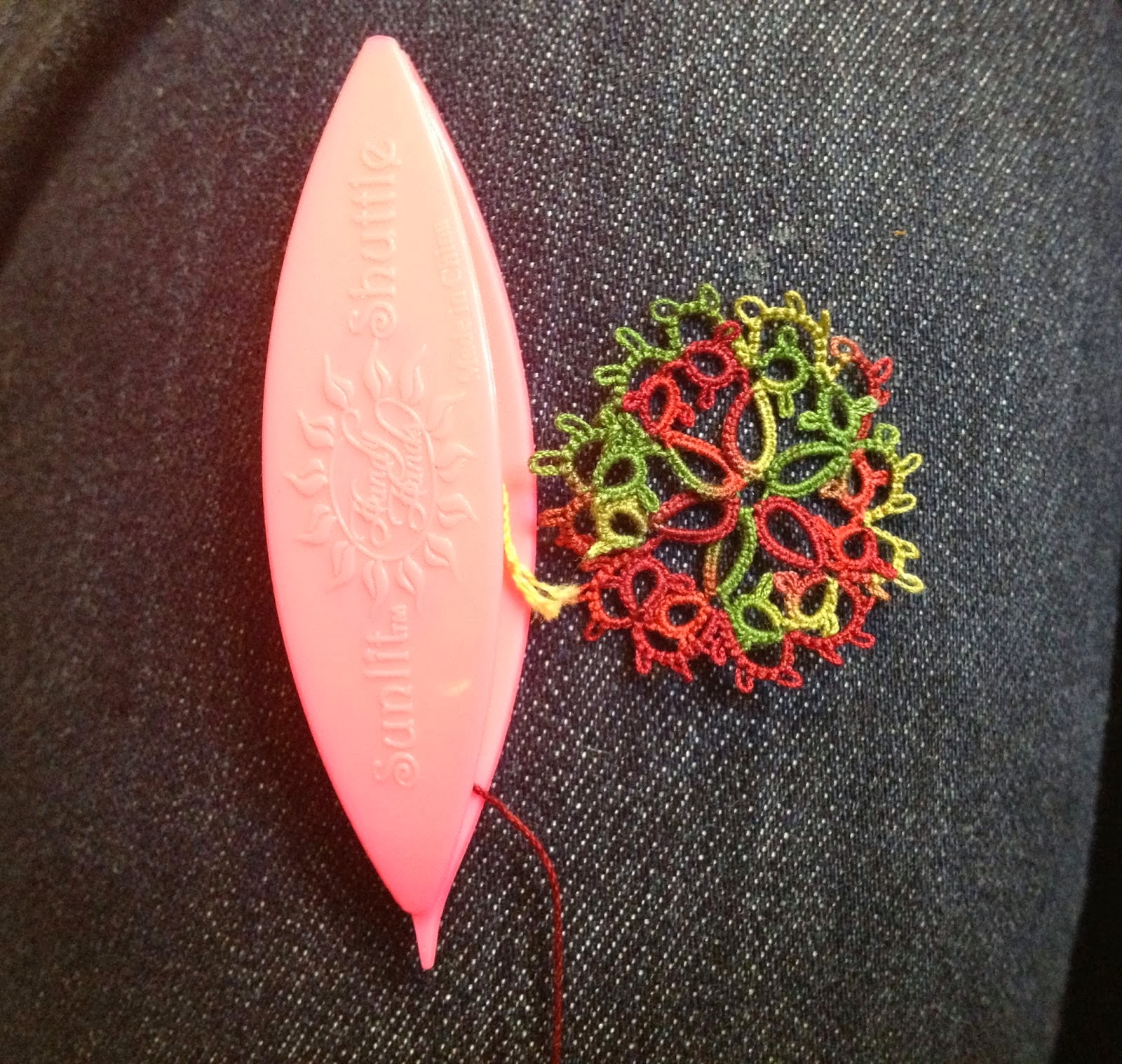 Margaret says one of her favorite heart patterns is Butterfly Heart by Irene Woo which she tatted in Lizbeth size 20. 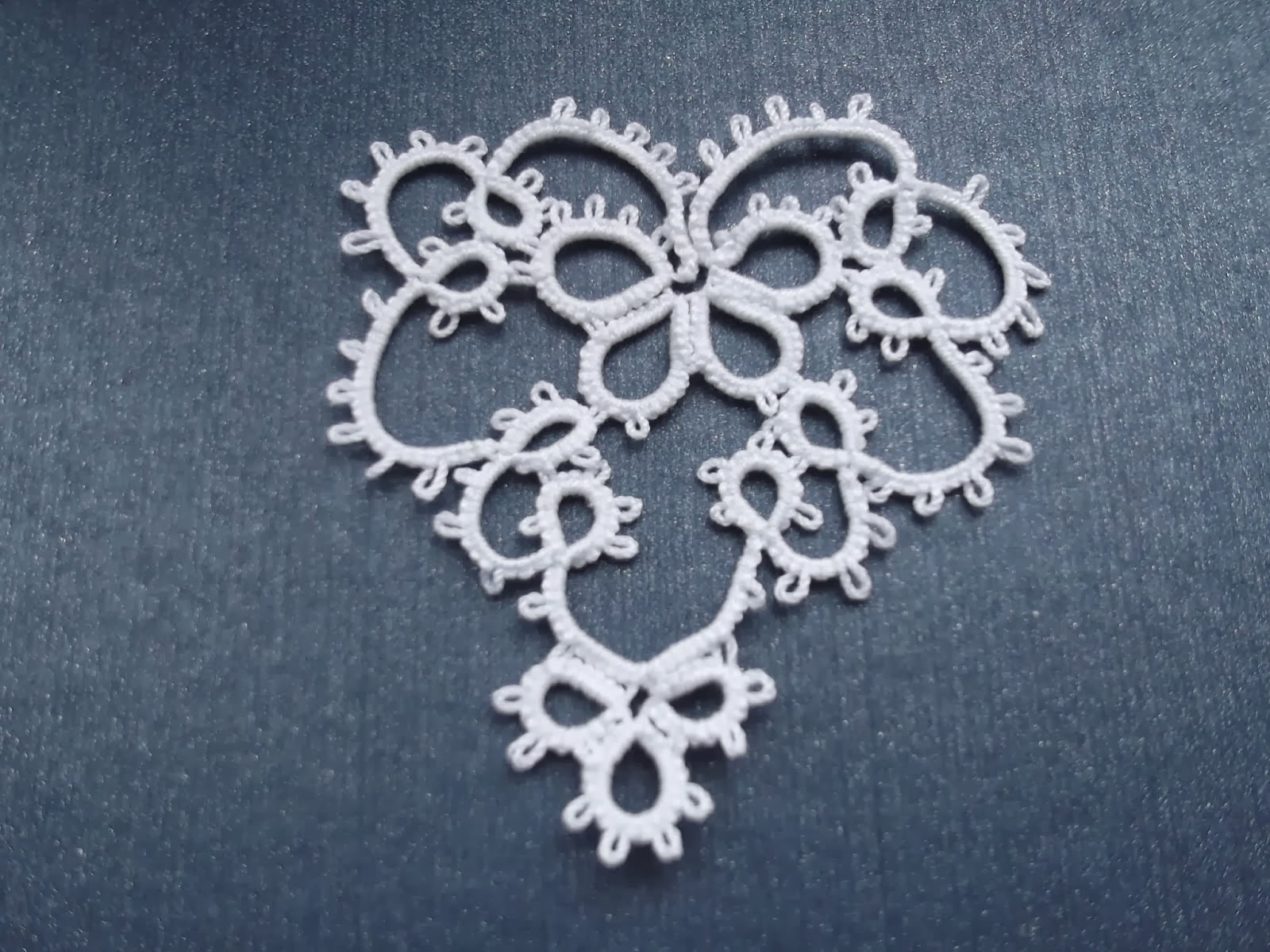 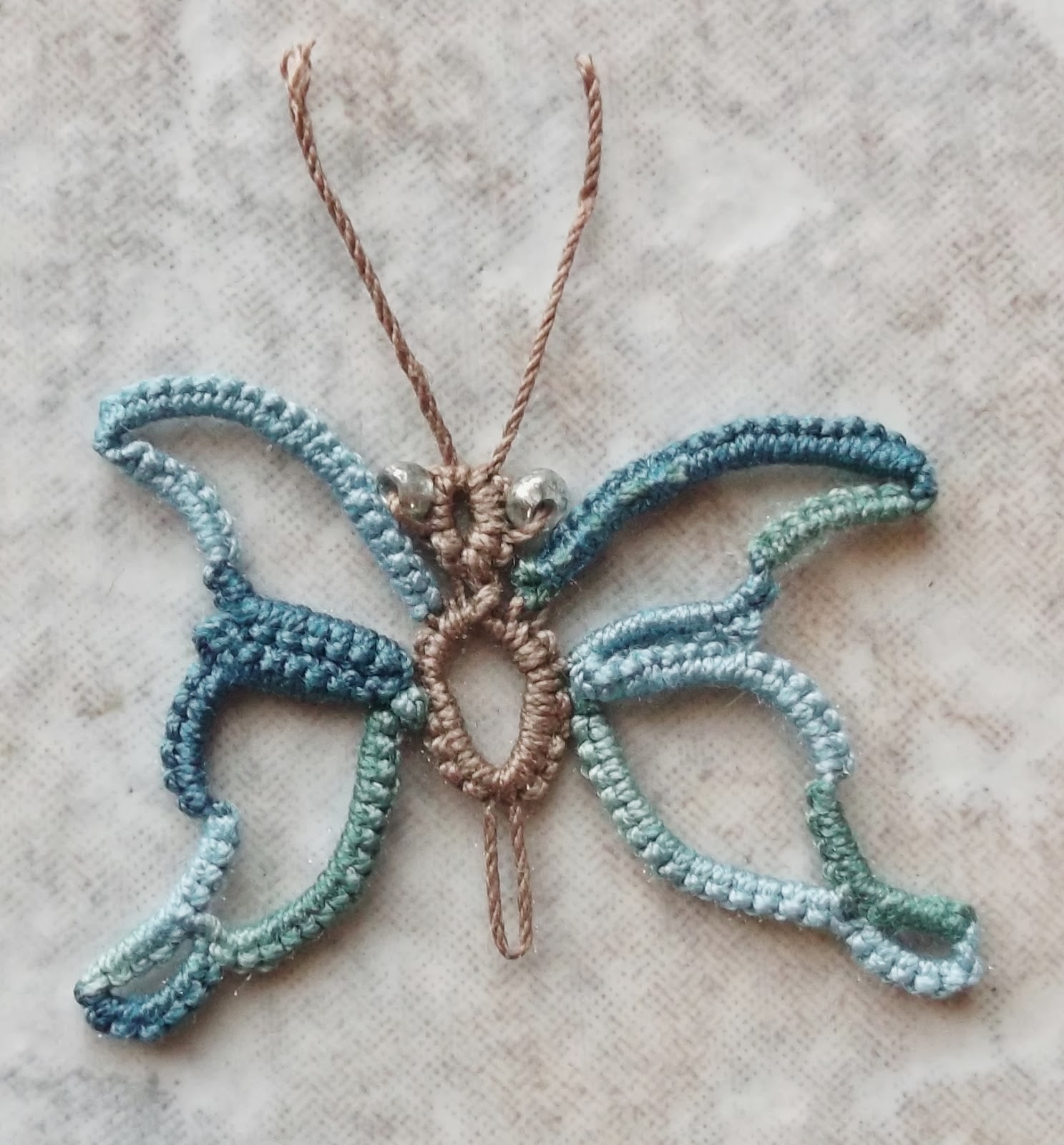 Martha did ball joins to make joining to long picots possible for this butterfly bookmark. The close up shows it better and the pattern has not been added to her pattern page.

Orsi has created a tatted necklace matching with the grey earrings. 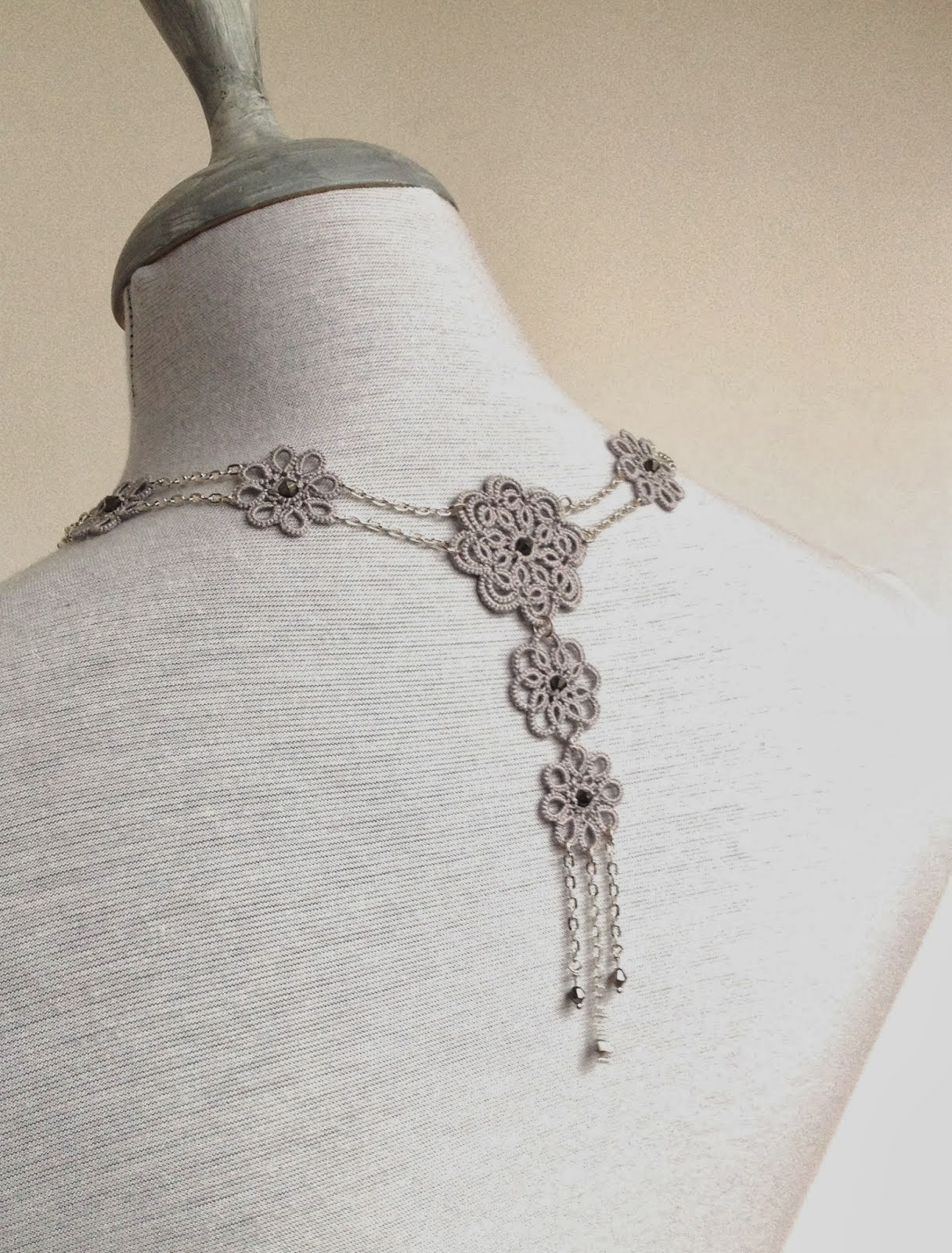 Sue was having tatting withdrawal and just had to grab a shuttle, some Lizbeth size 40 Angel's Love thread and a flower connector finding and created this doodle. The center parts are not chains, but instead are SCMR's. 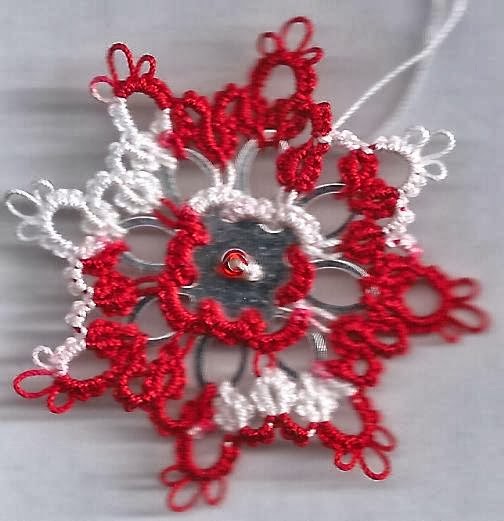