Claire is sure it's the second sail of a boat that is forming up here on day 10 of TIAS. This horse pattern has been created by Yanka Moroz and it's perfect for the year of the horse. Day 11 of TIAS and it does look like the sail of a ship. 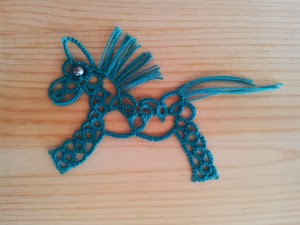 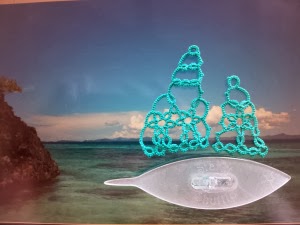 Phyllis tatted the boomerang earrings from Marilee Rockley's new book called  Beaded Tatting Finery which she made in her own hand dyed thread. The February challenge is to design a heart, but this heart looks more like an owl. Isn't that 2 for 1, when you accidentally create what you weren't planning, and then go back and make what you were planning?

Lelia tatted day 7 and day 8 of TIAS paired up with days 1-4 she has no idea what it is. She needed some practice on SCMRs and it seems as if she has it now. TIAS day 9, 10 and 11 are done and still not looking like anything familiar. This little motif was tatted for a girl friend. 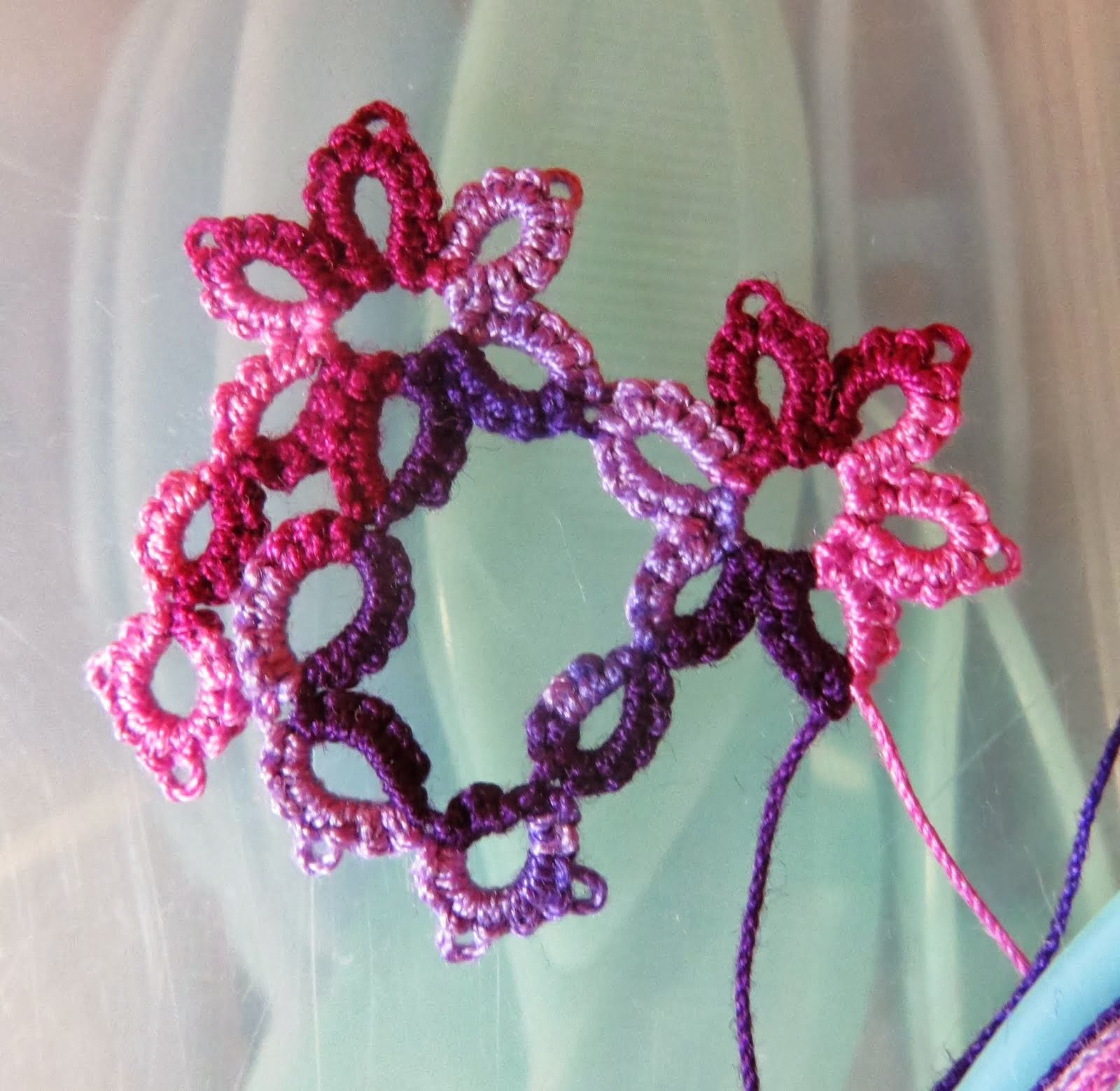 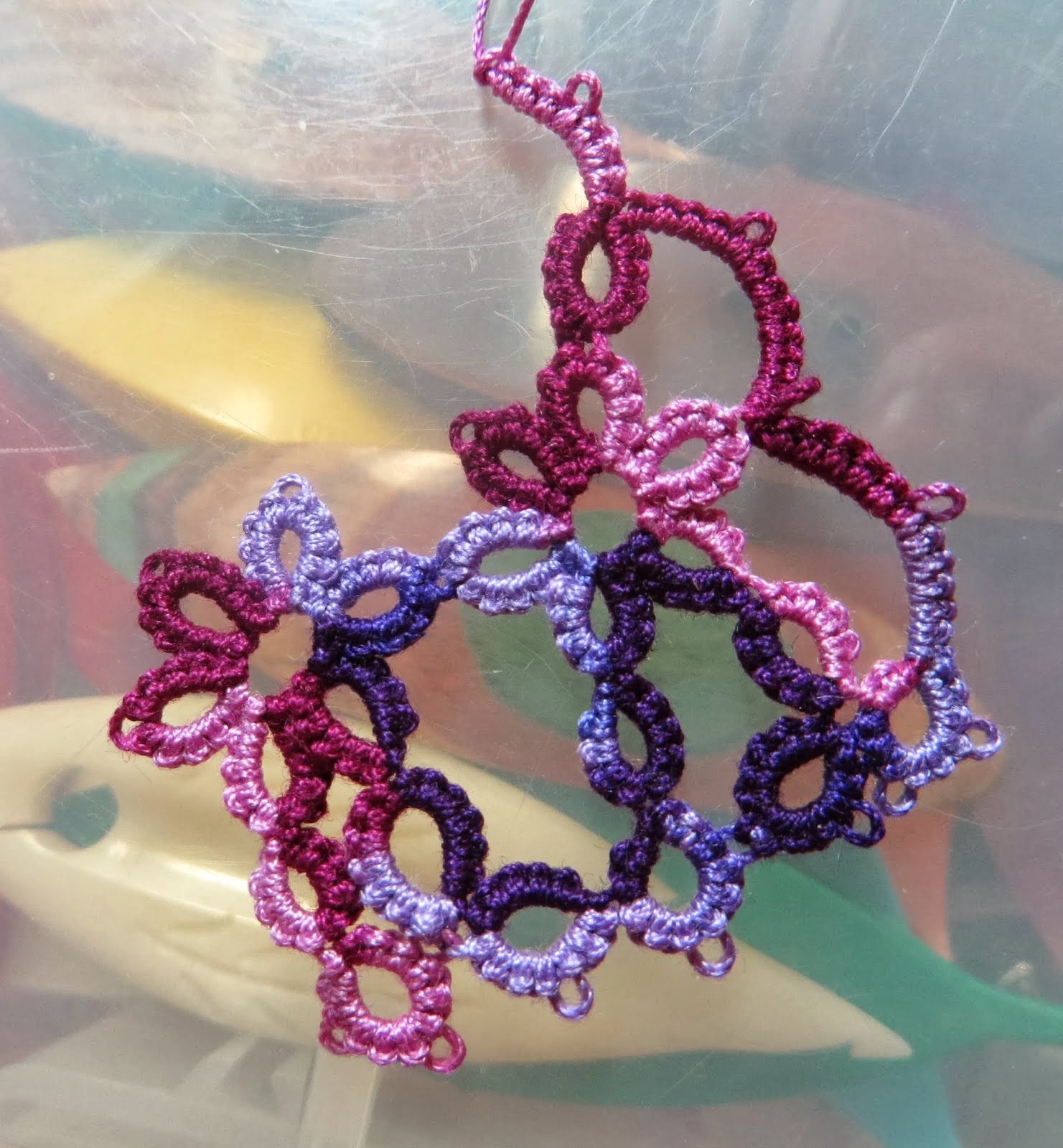 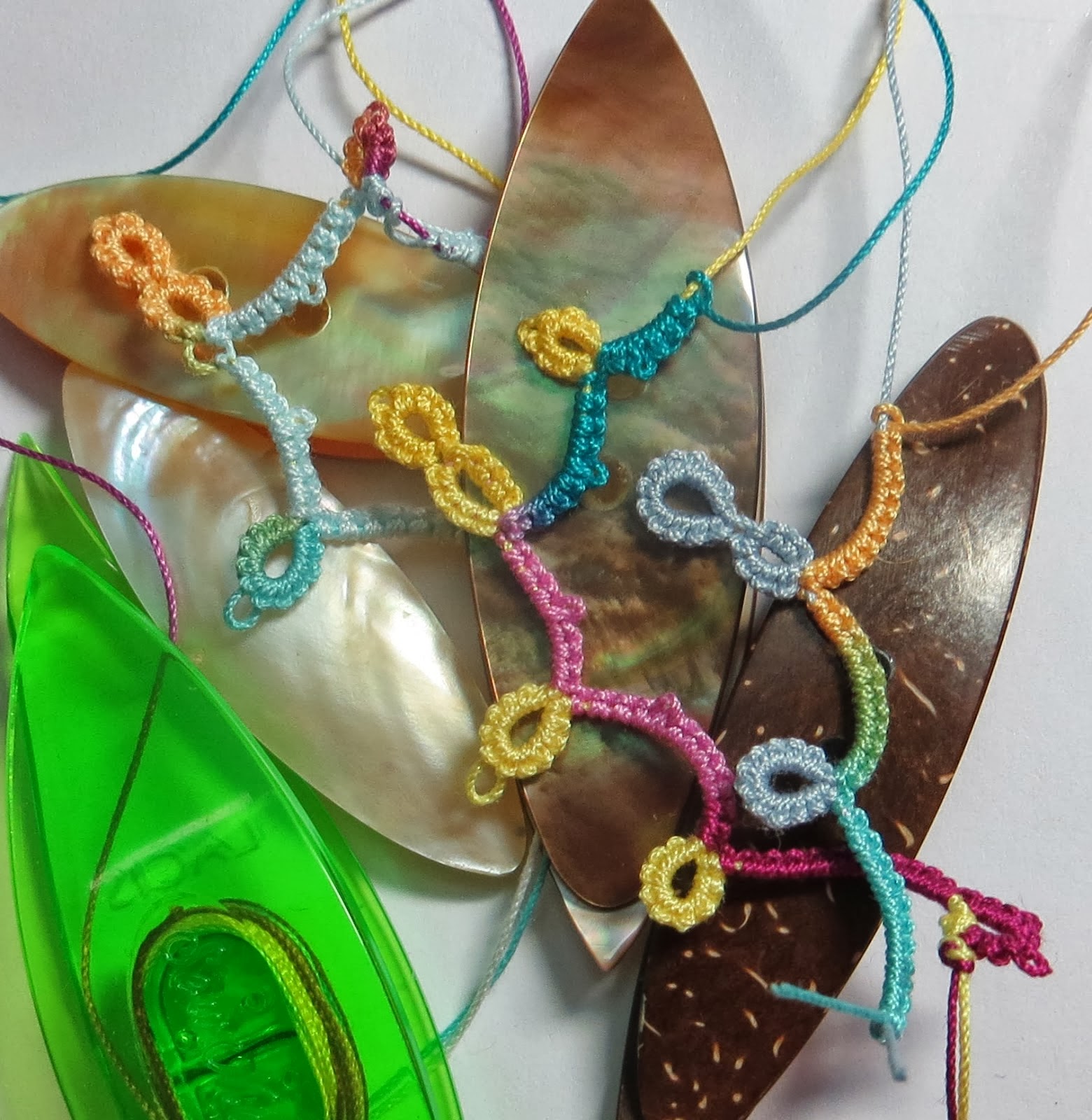 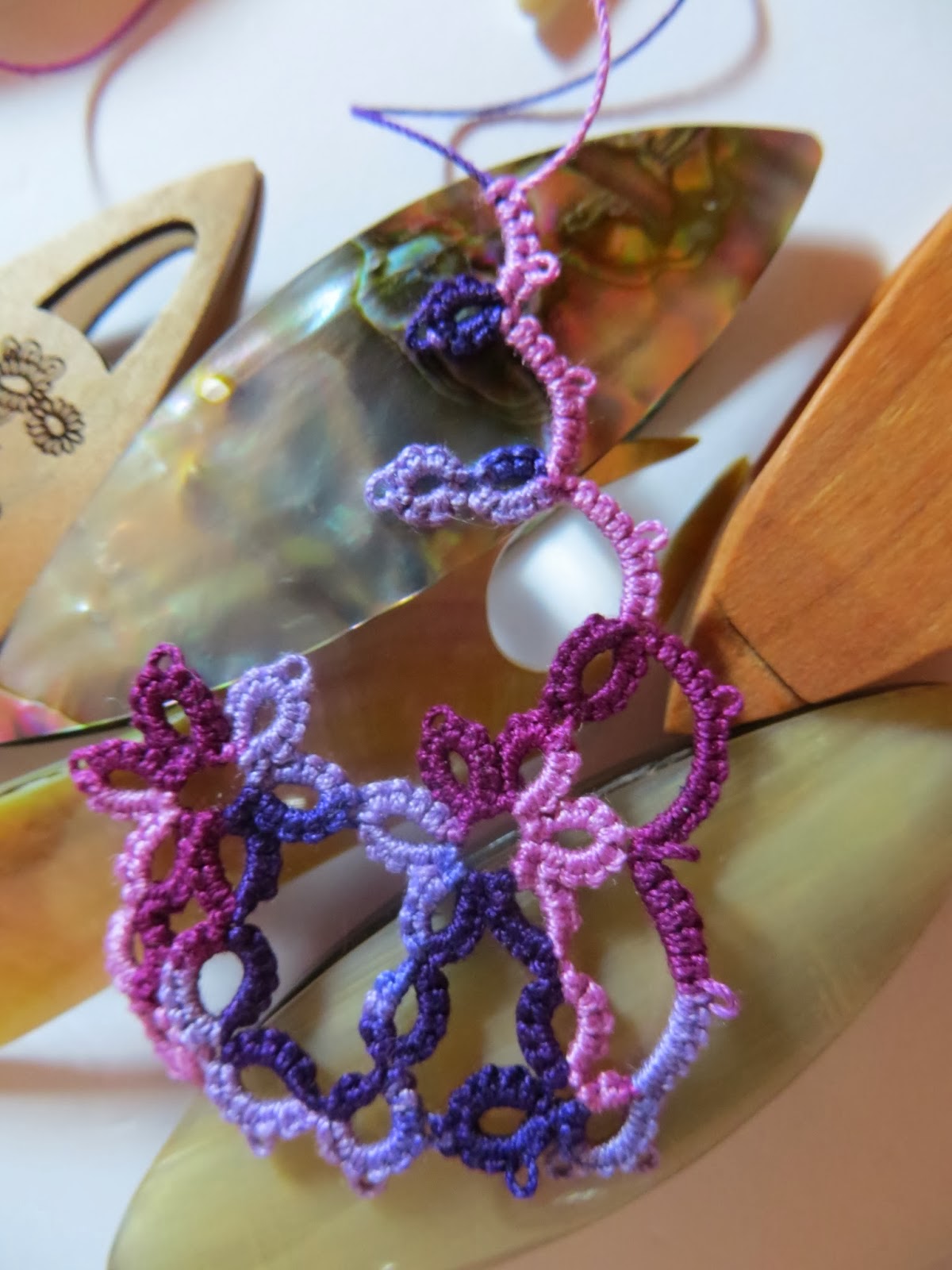 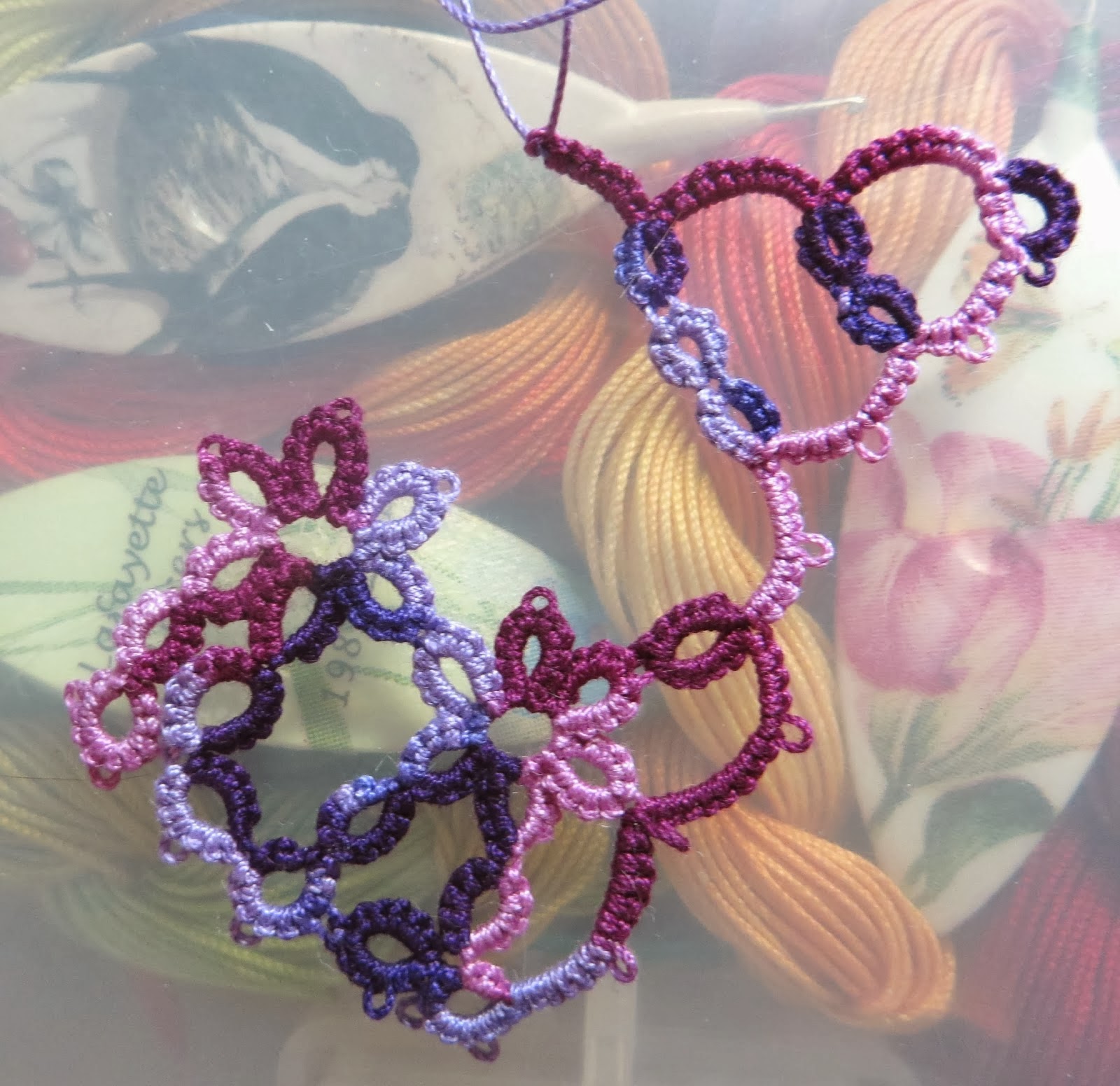 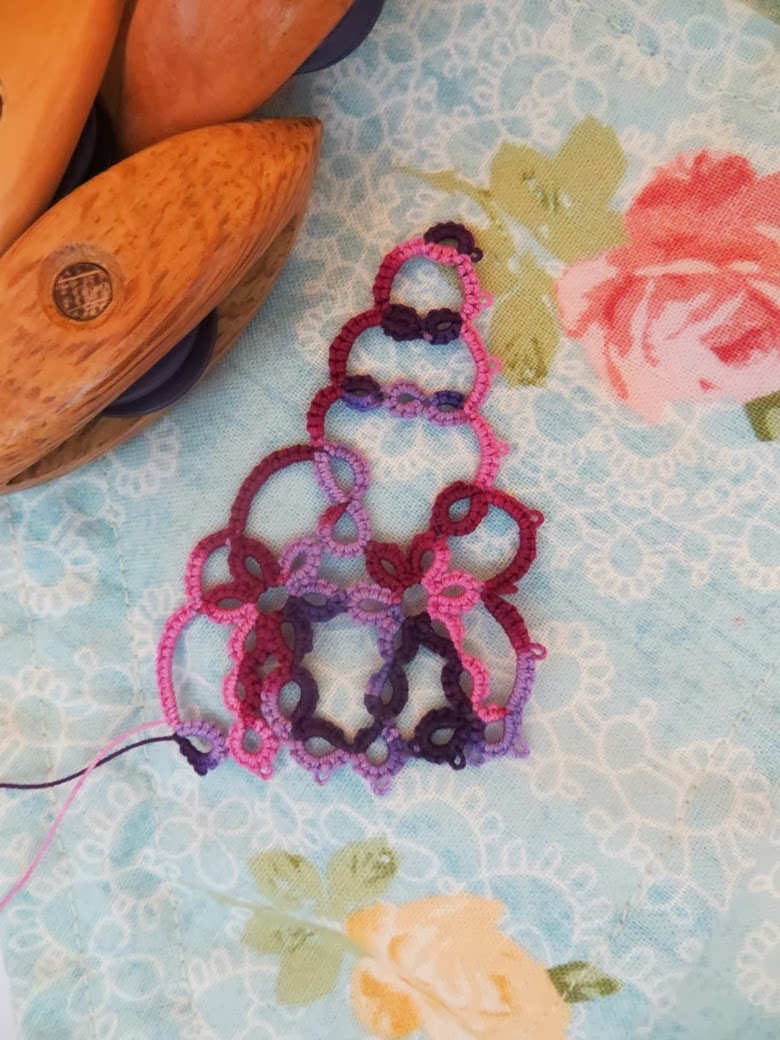 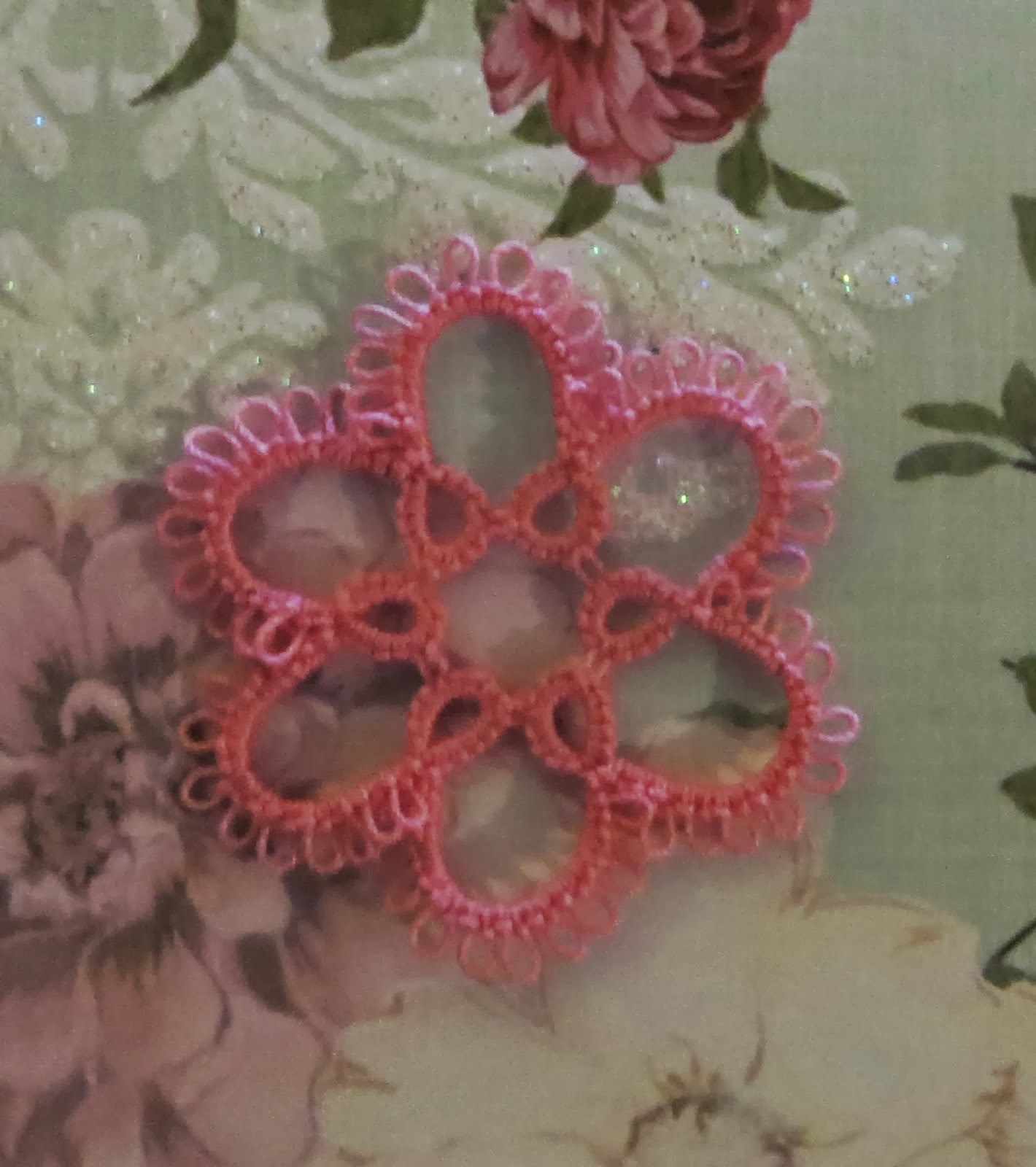 Julie tatted these snowflakes for Christmas and took pictures before she gave them to her sister, but life has been too busy buying a home, buying a business, and moving across the country, to blog about them.

Jessica did these 3 samples of HDT so that she had a visual of how the dyes turned out, only now she's not sure which one is which. 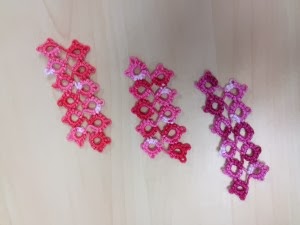 SunshineCraft missed the first part of Jane Eborall's TIAS 2014 and spent last weekend catching up. Work on the Mystery doily by Vickie Reynolds continues and here it is at Round 5. 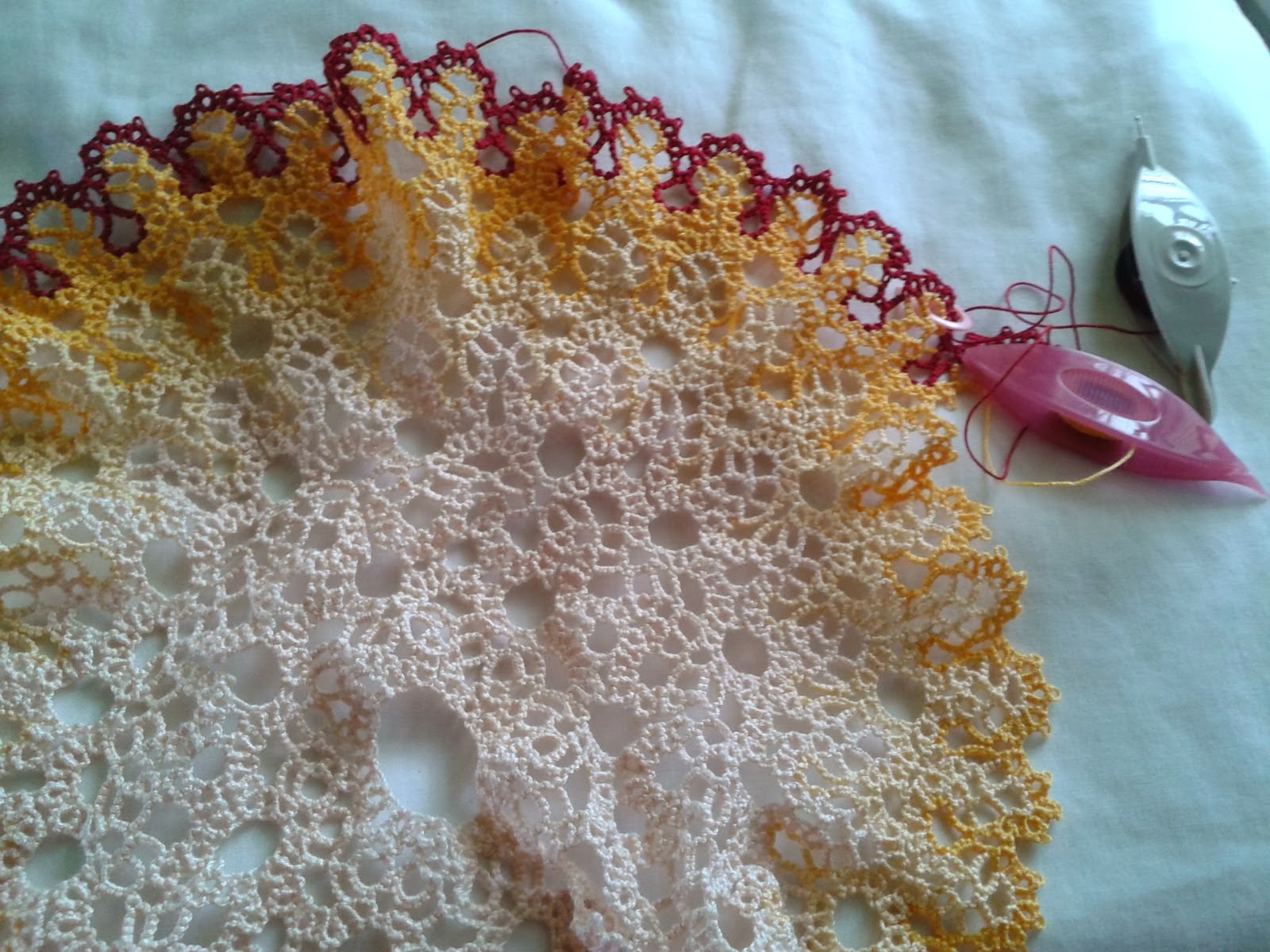 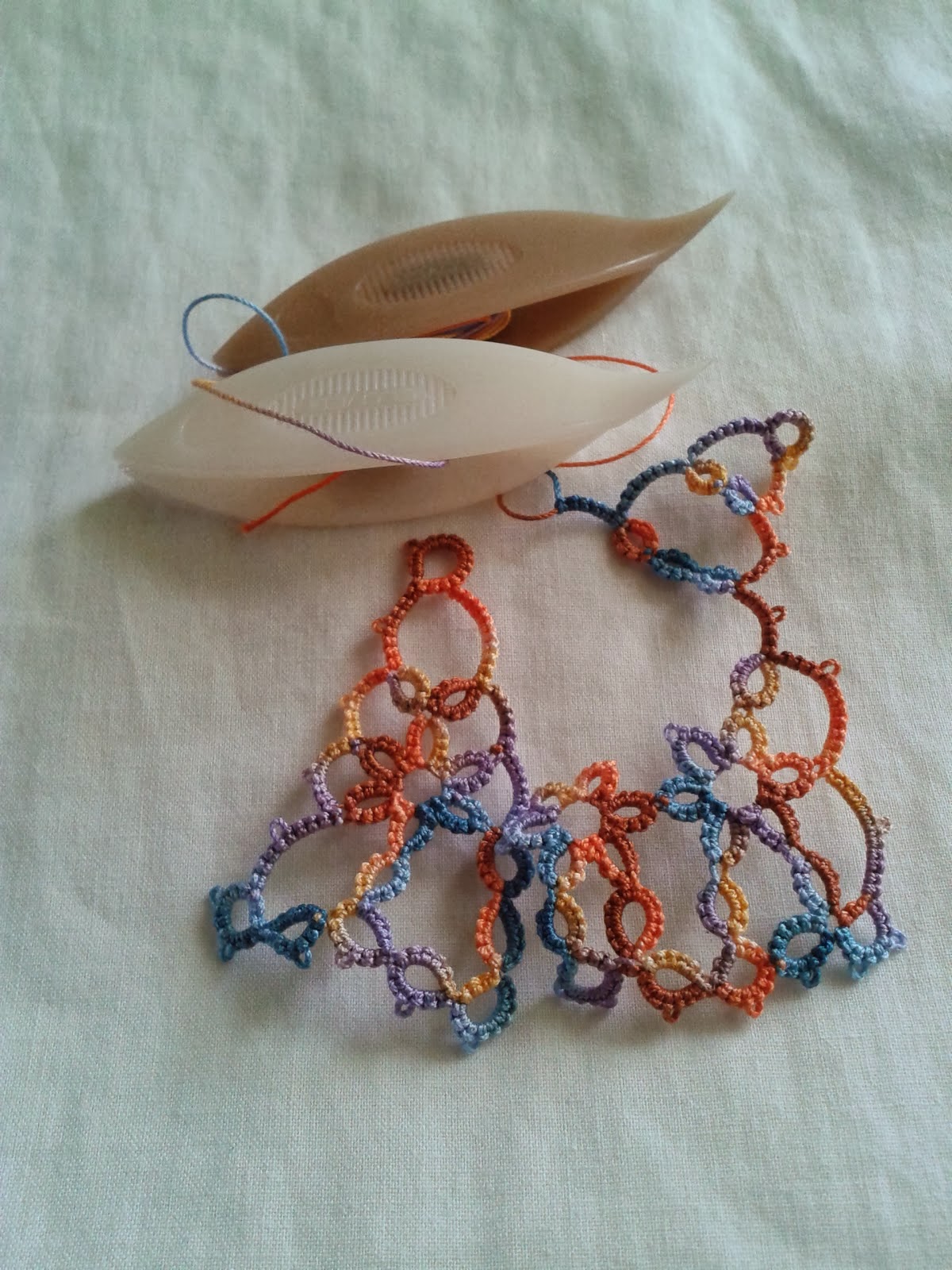 Linda has several tatted ladies done and she is adding them to her quilt blocks. The crinoline ladies are amazing on their own, but embellished with silk ribbon flowers, small tatted flowers, or beads, they make an amazing addition to a quilt. 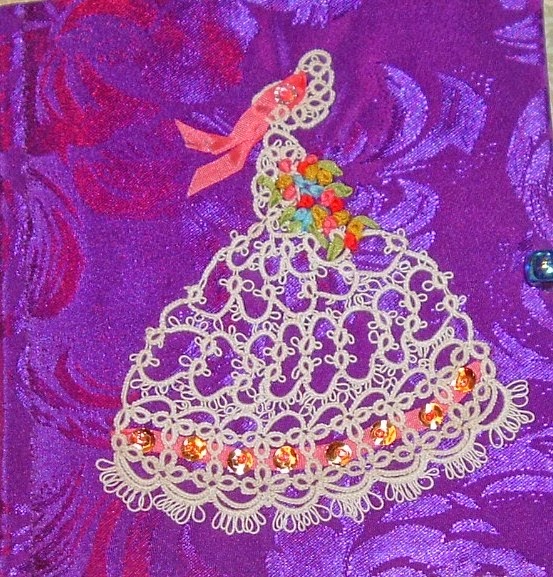 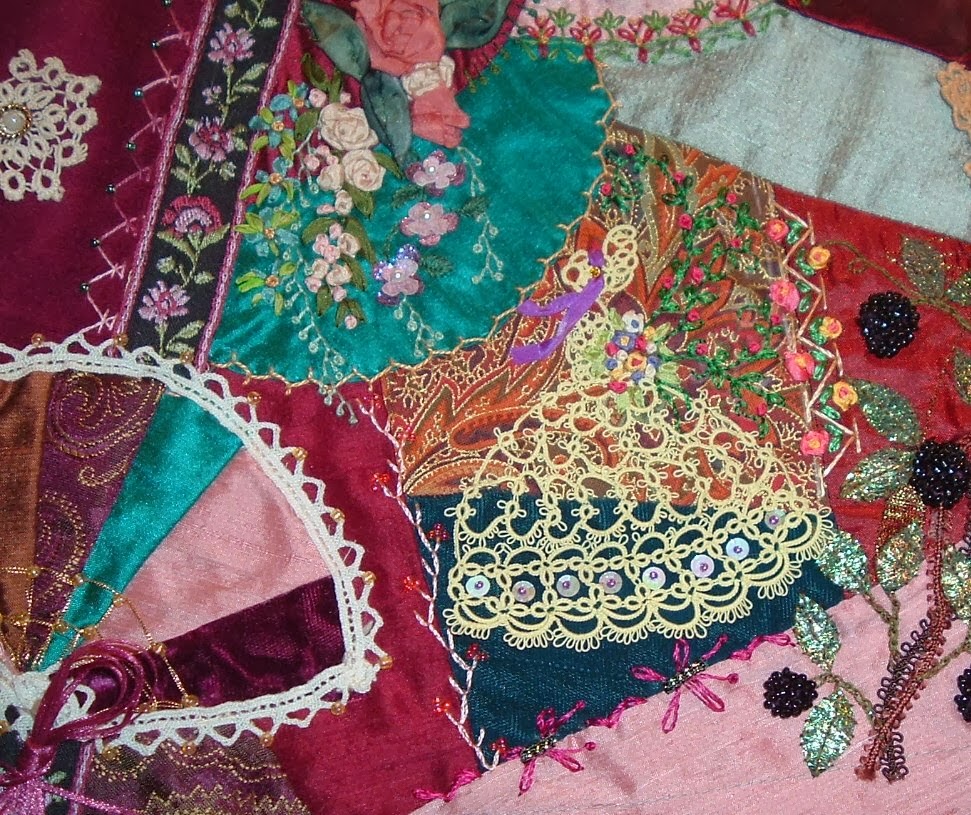 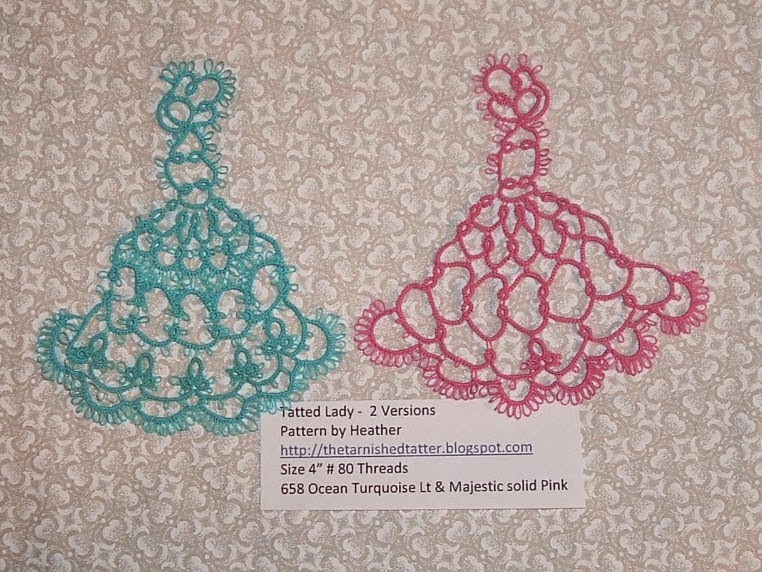 Diane received some tatted pieces from Carolyn that her daughter stitched to little cards. Now she has lots of reward tatting for her students. chose a motif that Diane tatted and Shelby chose a motif from Carolyn. Diane managed to tat Doodad Snowflake #1 without the doodad before she nodded off. 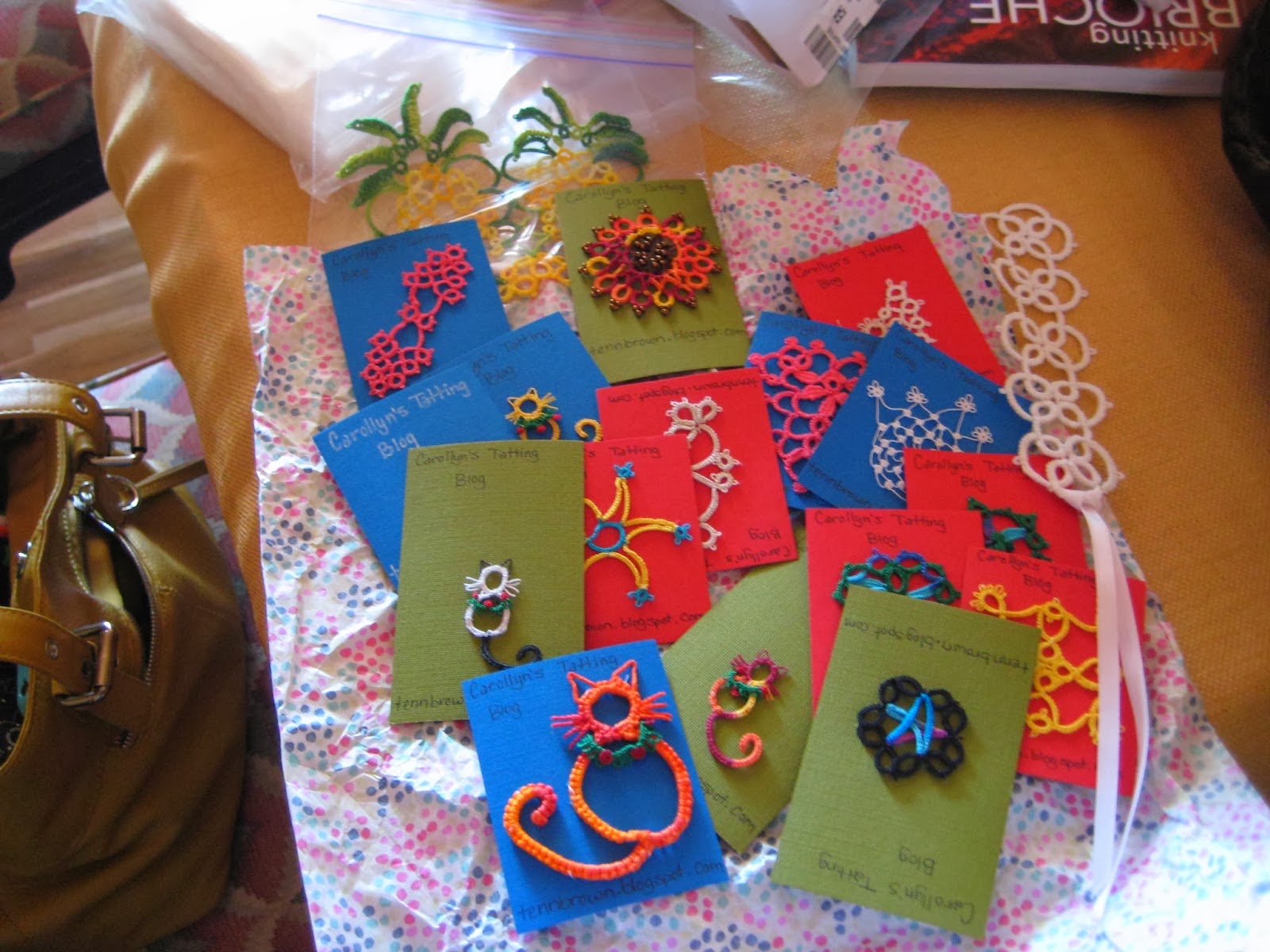 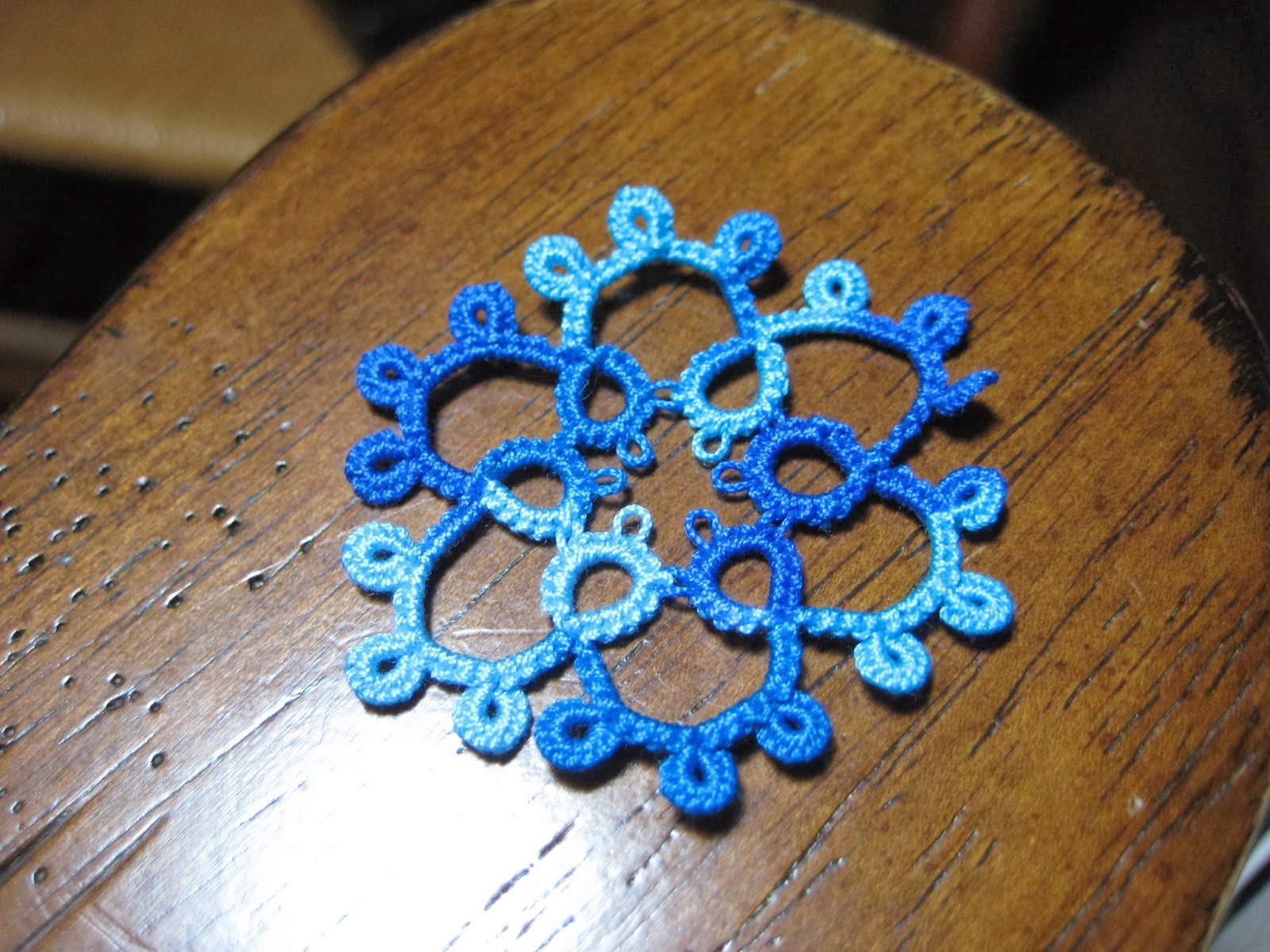 Fox tatted this design from a Japanese book in #40 Venus thread which is soft but lovely to work with. She now thinks day 11 of TIAS is the Walrus and the Carpenter, from Alice In Wonderland. 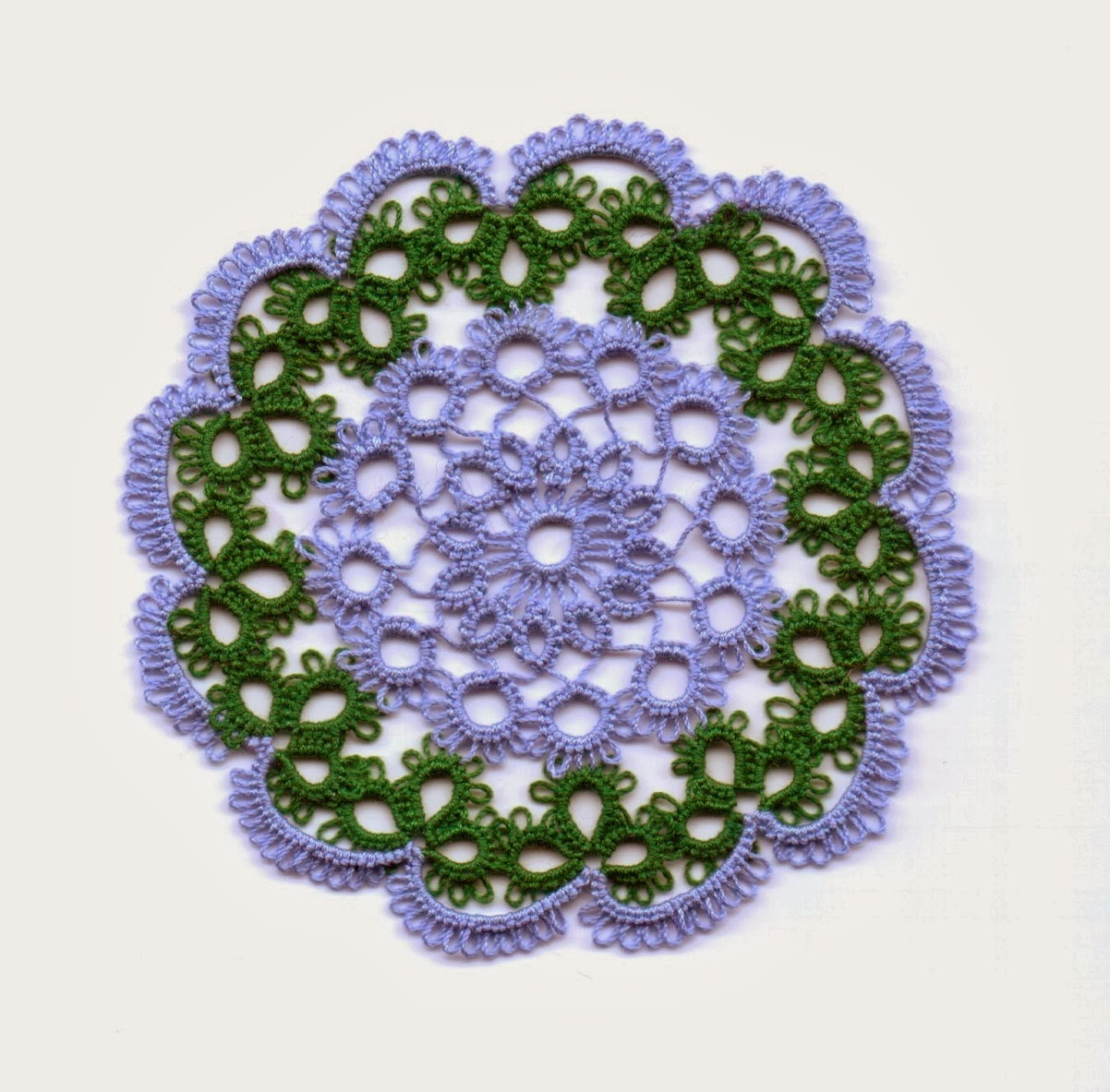 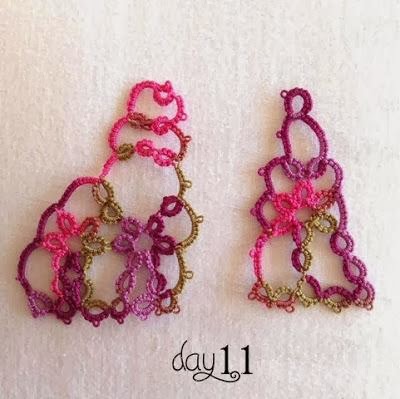 IsDihara wanted to tat a golden crown and found Corina from the Nethlands' lovely design: Tatting Crown. The crowns tatted by Corina have lovely arches that are somehow missing out of hers and Martha suggests trying a different method of block tatting. 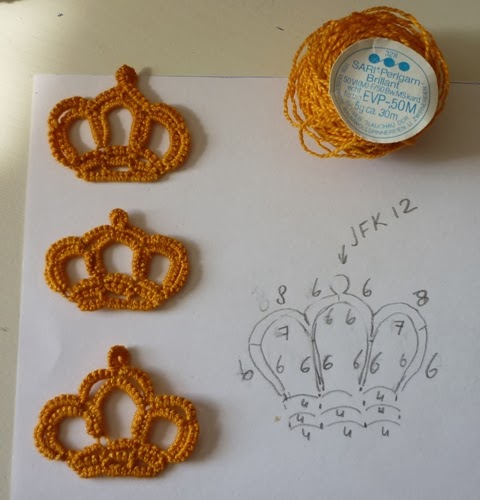 Marie has decided that her next round for the 25 Motif Challenge will include larger projects. Since she has just been give Jan Stawasz book Tatted Treasures she has chosen to start on Doily 1 and she's up to round 4, working in size 10 thread with a gold filament. 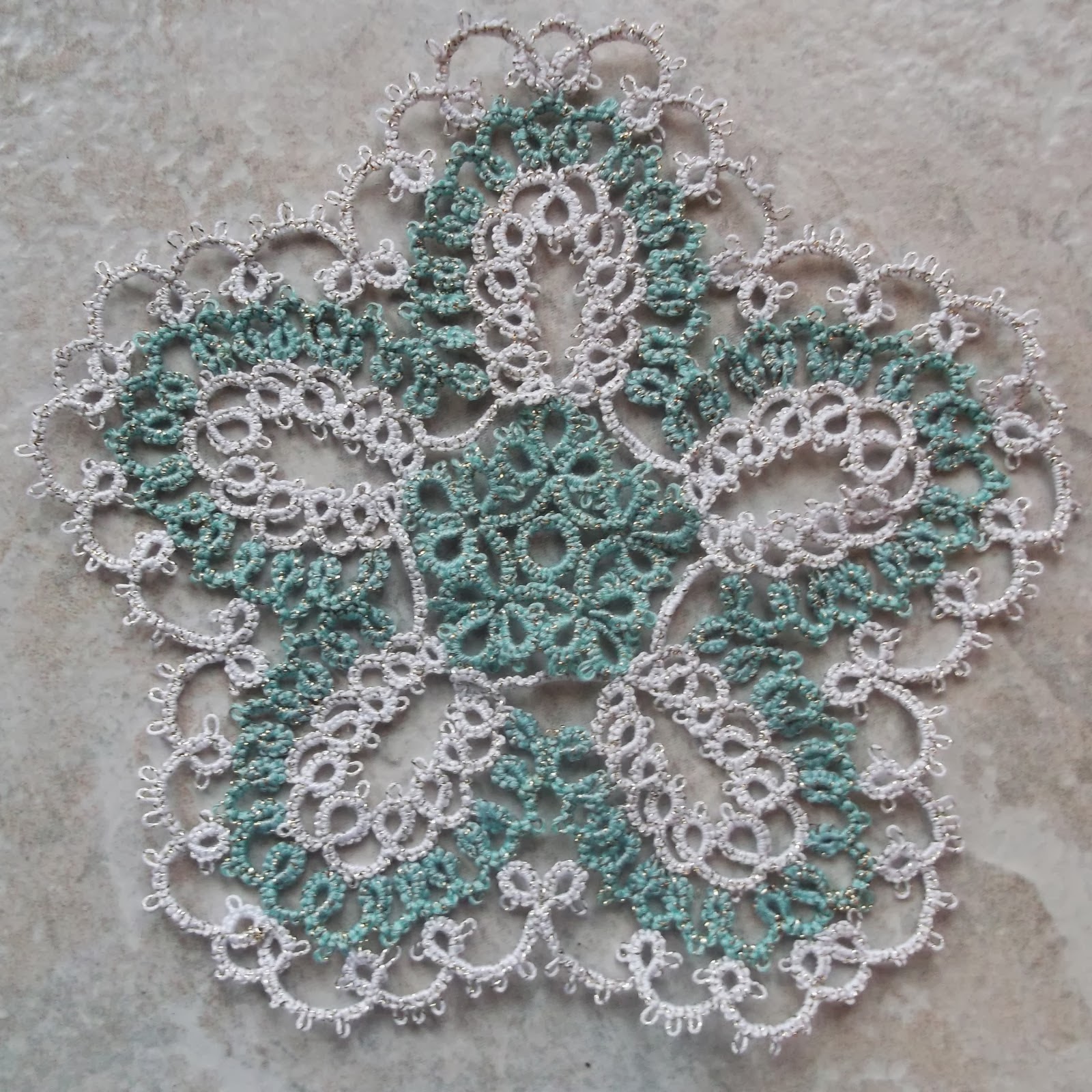 Martha did two more antique chain-only motifs from a different collar in Priscilla No. 2. She had to pull her rickrack chains very tight to make them fit the space to match the illustration because the original pattern called for size 40 core thread and size 60 ball thread, but she used the same size for both. 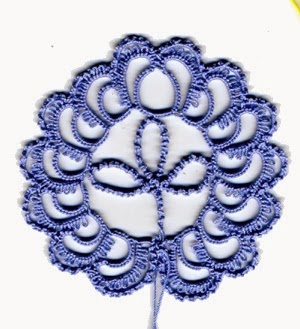 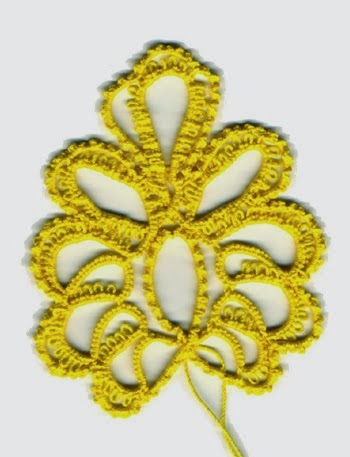 Orsi is making progress on her tatted lace bag project. This is her first experiment with Ankars. 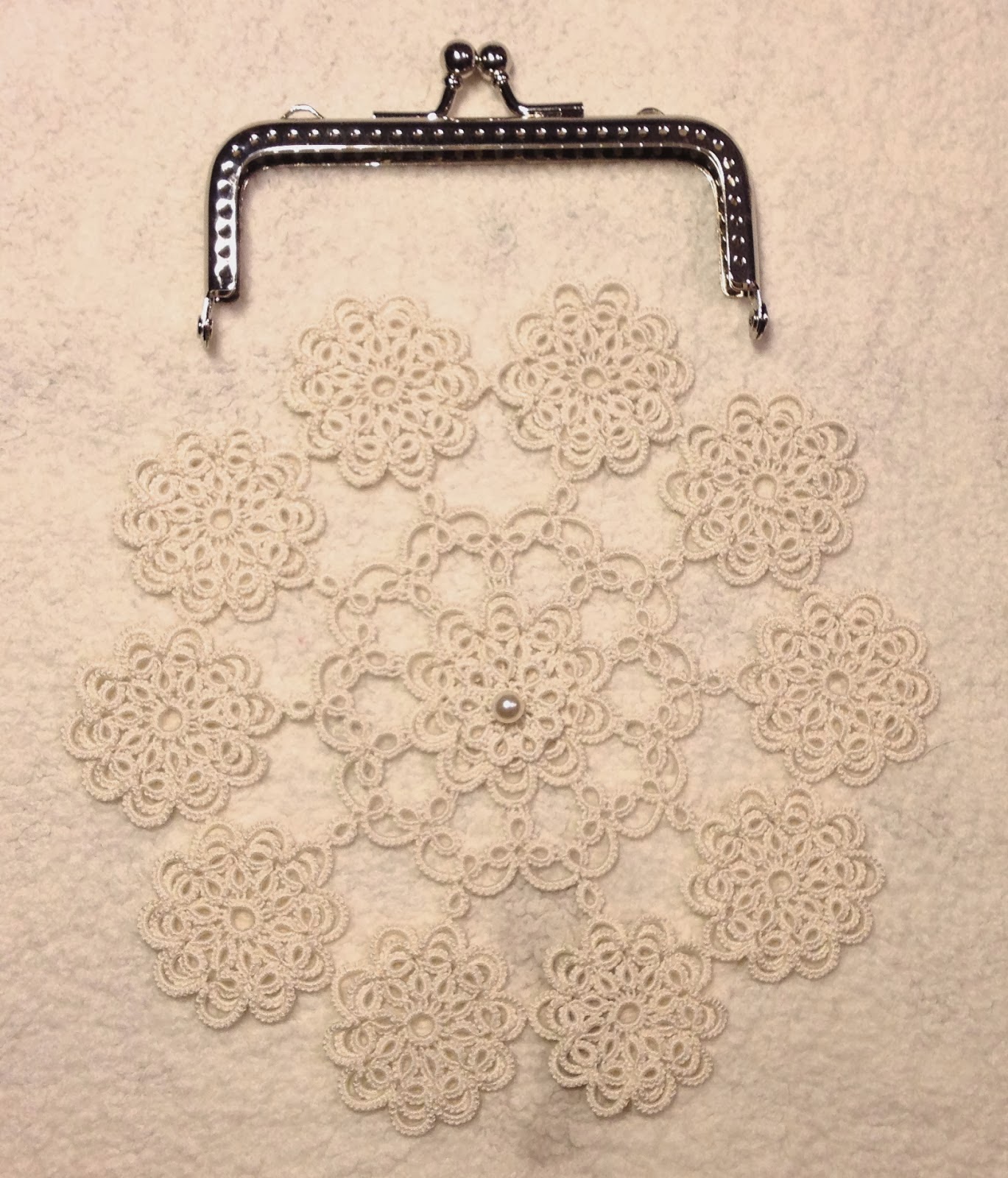 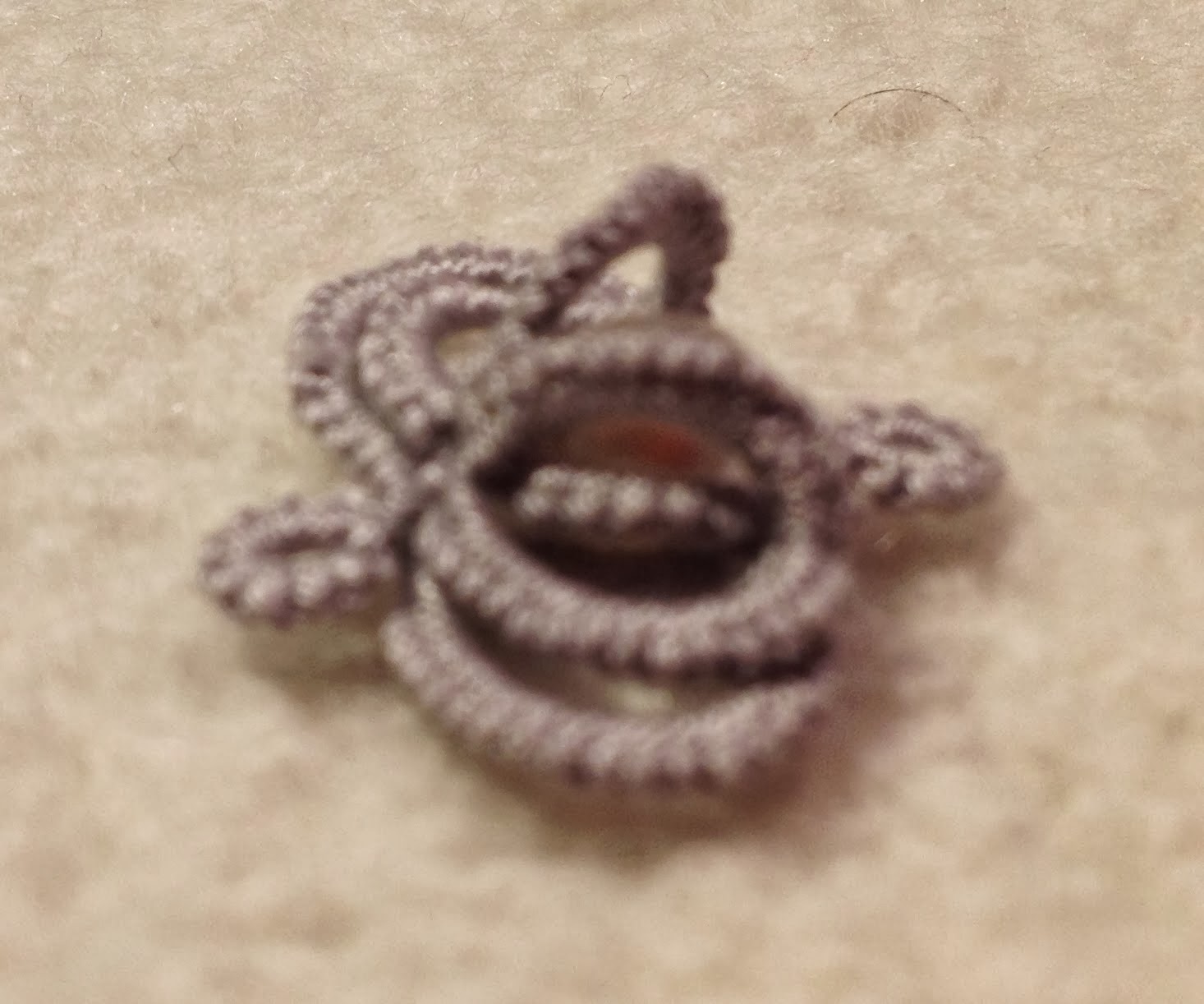 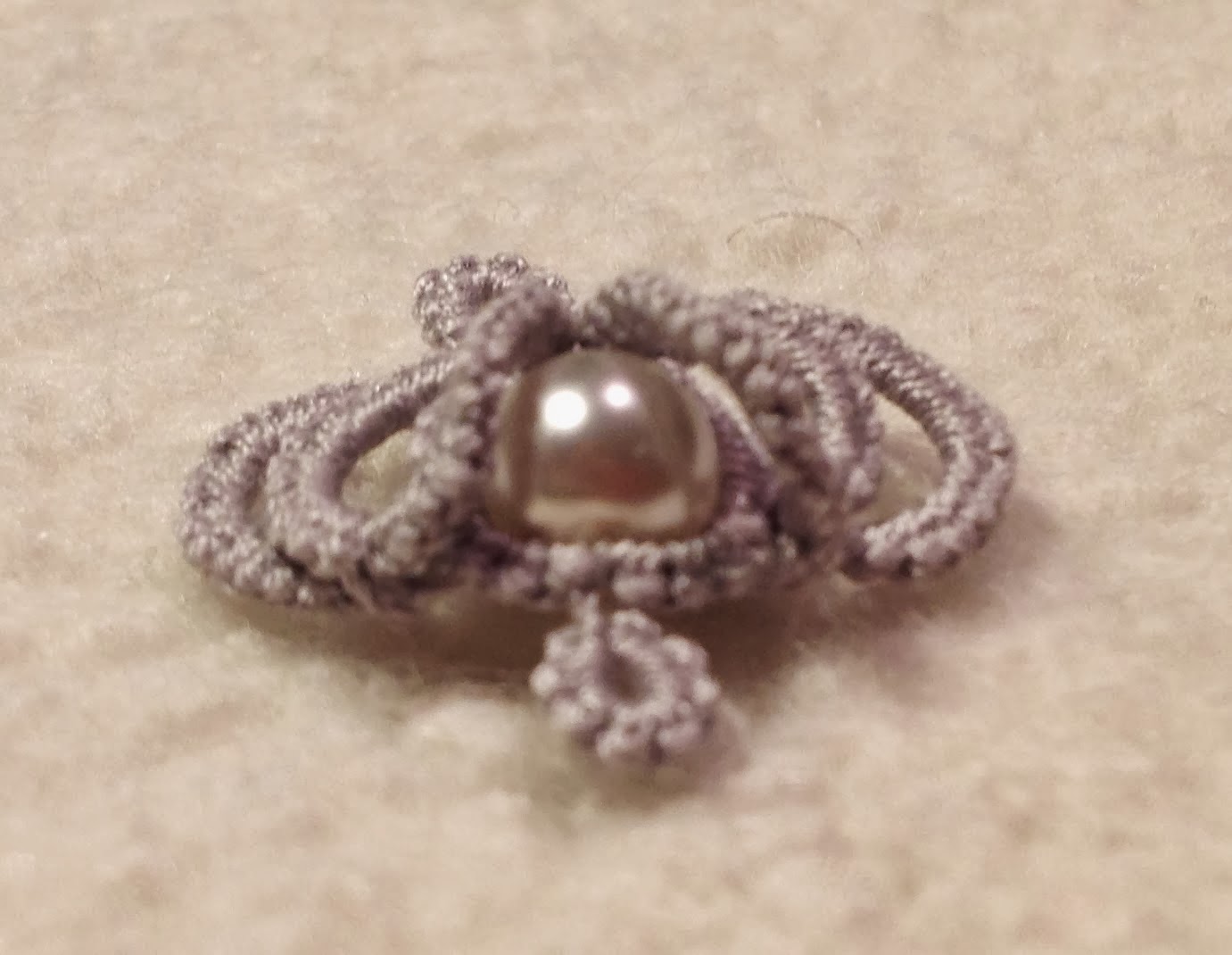 Wanda tatted day 9 of TIAS then she did days 10 and 11, with still no clue as to what it is. Since she had a lot of tatted bits around and she had fun tatting the little bags, she thought she'd try some ATC's. The first one used tatting and colored pencils. The next one used tatting, paper and ribbon. The Dove pattern is by JoAnn Stearns, Joy's Heart pattern is by Wanda Salmans.