Carrie spent time visiting with family and still managed to get some tatting done a small star by Birgit worked in size 10 white and green. 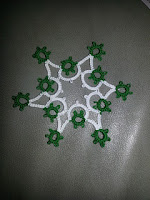 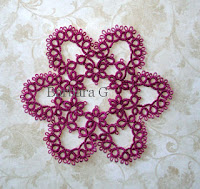 Jane had some input from other folks and has learned a better way to make a double double stitch and included pictures on her blog. 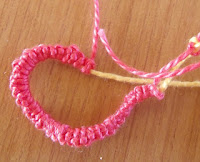 Jessica has added a closeup of the fair lace she did. It's a pattern from Priscilla Tatting Book #3. 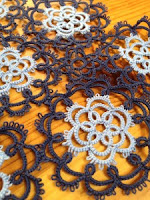 Ancolie was working on another design from Iris Niebach's Fantasia 4 but she doesn't like how the four small rounds at the top look and she's not sure how to rectify it. 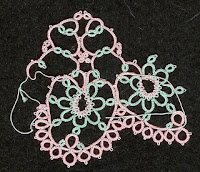 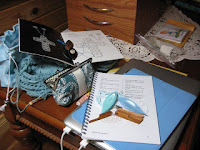 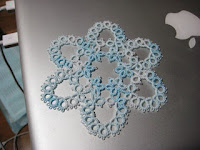 Fox loves how her shuttle matches the colours she chose for this project. Here is the progress so far on her Ellen Stafford pattern. The first sample of Perfect Quilter was lovely to work with. The next thread clung to itself and was impossible to un-tat, which she thinks might be due to the black dye in it. The last one was a fun palette and all of the motifs are done in a pattern by Blomqvist and Persson. 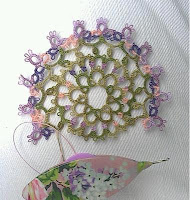 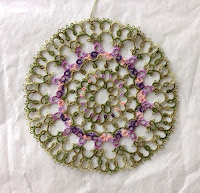 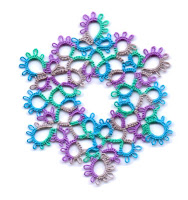 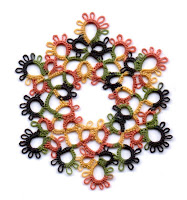 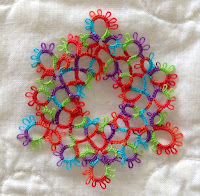 Margaret did a test tat from the first page of Jan Stawasz' book, in Lizbeth no 20 Pink Parade thread, which she will use on the front of a card. She and Wendy have been doing a tatalong of Flowerpot number one from the book, which she tatted in Lizbeth No 20 white and plans to mount in on blue card background and frame. She tatted this motif from Angelina's book as written, in American Apple pie no 40 Lizbeth thread, but it came out looking like a hat. She re-tatted it with 3ds between the picots on the rings and chains and it came out perfect. Perfect, except that she chopped off a picot when cutting ends, and had to re-do it again, this time in Altin Basak thread.

Marie had only one blue cats-eye cabochon and after tatting the foundation, around the it she decided it was a keeper. She used two strands of Sulky, gold metallic thread and of course had to make matching earrings to go with it.

Wanda tatted this little piece with the "Baja" Perfect Quilter thread just to see how it worked up. 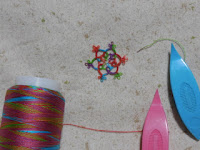