Aysh has re-joined the challenge and shows us a floral picture that was her last project. She had to lay her tatting aside for a while and started this new project just to find out that she's going to need to run out and buy more thread. We all need more thread, don't we? 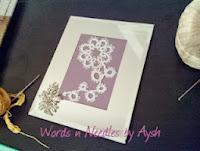 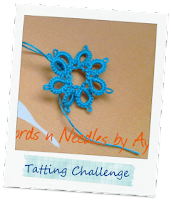 Carrie has finished her 25, or at least she's pretty sure she did since there was a whole flutter of butterflies that she completed. It's Birgit's Small Star done in size 10 Aunt Lydia's green and white. 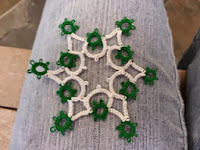 SunshineCraft wanted to try the mystery doily from Georgia Seitz' website and thought she'd work in something blended with a strand of gold thread instead of plain white, but it doesn't look like it will block nicely. The next try looks like it's a keeper done in variegated Anchor pearl cotton. 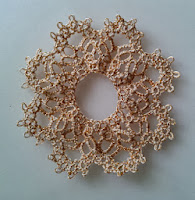 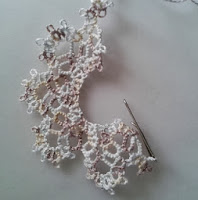 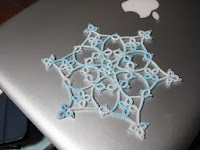 Fox tried out some King Tut thread that Frivole sent her, using Mary Konior's Buttercup, but it's really tiny and she doesn't think she'll be using it again, although the colour is gorgeous. Fox has also been inspired to give the mystery doily a try using the thread she got for the trellis doily. Just for a change of pace she has some beads and thread that will do nicely for a Japanese pattern that she has finally worked out. 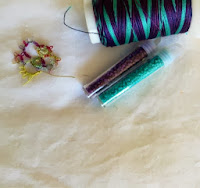 Margaret shares some bookmarks she completed. The Spiral Bookmark in white and Tropical Punch and Kersti's Floral Tatted bookmark in Pink Parade, all size 20 Lizbeth. Then there is the Rose and Butterfly bookmark by Jeanne Lugart in a rather old thread by Coats 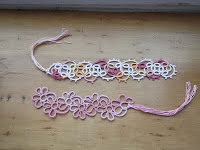 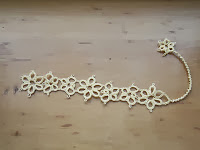 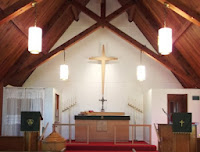 Wanda made these motifs in Lizbeth #662 Turquoise Light size 20 which she planned to put on a denim purse. Instead she will mount them on a wooden heart.