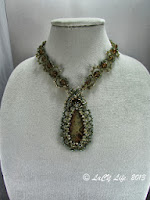 mb duke made these beautiful dream catcher earrings using Sue's pattern with vintage Star size 70 thread for her mother-in-law. this tea pot and tea cup will be going to my next door neighbor after I complete the sugar bowl, creamer and second tea cup.  The Maltese tea set from Martha Ess' Tea is for Tatting are done in Lizbeth size 20 Royal Blue and white. Lizbeth size 40 Purple Medium and Lime Green were used to tat Regina Brummett's bookmark.

Laurie picked up CQ blocks at Tat Days and used Spring Flowers in size 80 Lizbeth thread for some embellishment. The Triangular Medallion by Lisa C. Trumble was made with Lizbeth size 20 in color #117 for another block. 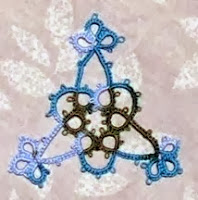 Ginny loves using these colours for the peacock which she recently finished.

Kristen has motif 25, Nancy Tracy's Tatted Square Motif. followed quickly by motif 26, the beginning of the round doily of the Spiderweb Dresser Set from The Tatter's Treasure Chest, which is growing rapidly even with the use of a picot gauge. She did another little practice, ring only motif, just to use up some thread, which was a good two for one project. The spider web doily is getting more web. It would have been even bigger if she hadn't actually snipped it instead of the tail end she was hiding. She hid her accidental ends and hopefully is ready to carry on. 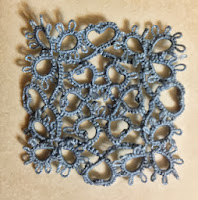 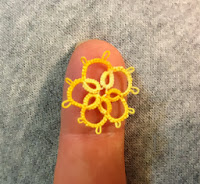 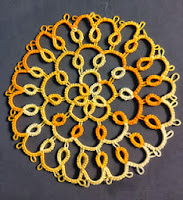 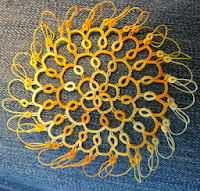 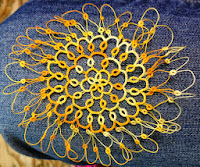 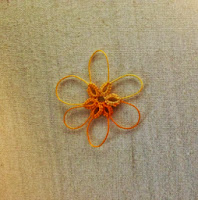 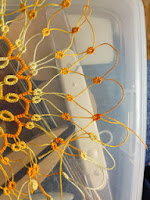 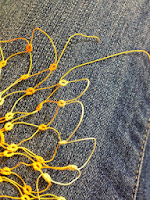 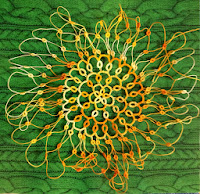 SunshineCraft is well on her way with the mystery doily and she's liking how it looks, but she'll soon have a decision to make since she is rapidly running out of the thread colour. Now she just has to determine whether she should hunt for more of the same colour or add in some contrast. 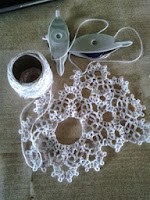 Linda's vest is starting to take shape. She has 35 large motifs and 28 small motifs done. The DMC pattern is all rings and she made modern day changes so there are less threads to tie in utilizing SSSRs 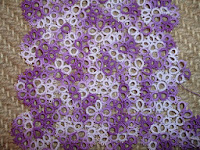 Ancolie tatted this very classic pattern for her 20th motif. Motif 21 is another vintage doily, tatted in soft pastel colours. 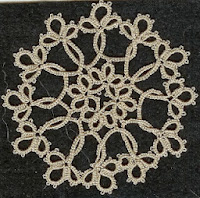 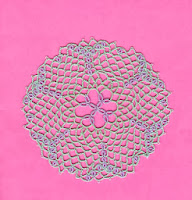 Fox tatted this motif using a pattern from A New Approach to Tatting by Yusai Shokoin. The mystery doily is being worked over and over in size 30 Ivory Cebelia as dyslexia strikes again. But finally... Success! 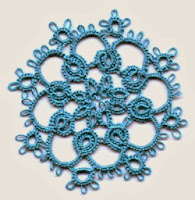 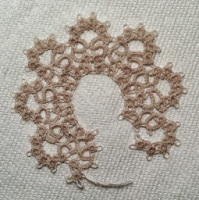 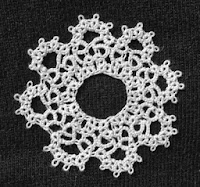 Jess entered Livi's Doily in the local fair and it won a blue 1st place ribbon. She also entered this hair clip, which is an abbreviated version of the flower in Mary Konior's Tatting with Visual Patterns and it won a 2nd place ribbon. Anticipating fall had her dying in colours she doesn't normally choose, but it came out really well.

Margaret had a picture taken of her tatting while on holidays, just to prove that she does indeed tat while vacationing. She has listed the pattern in her Etsy store for her 3D Cymbidium Orchid earrings. 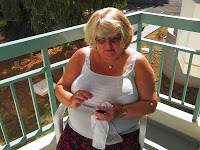 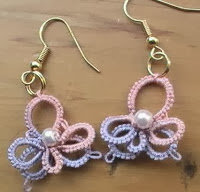 Marie show us the close-ups of the pulpit and stole. The stole edging was made up of simple rings. These exchange items are from Paula and she used the ocean and tea theme. The barefoot sandals to go on the beach with and the little butterfly was tatted by Paula's daughter. 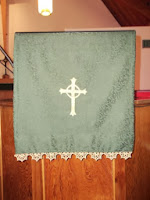 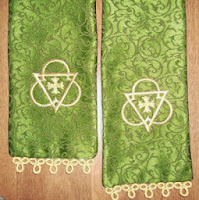 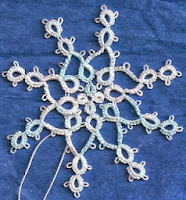