mb duke finished a Jane McClellen/Grace Tan cross, and this time scanned it into the computer before giving it away. 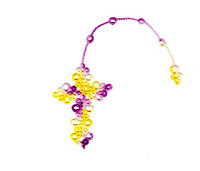 Carrie was meticulously following the pattern directions for this star which seemed to lack shape. That happens when you neglect to join to the prescribed picots. Here it is done properly. 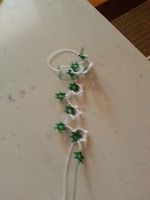 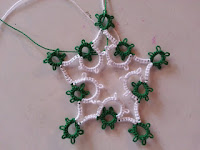 Meryl worked up to Round 17 of the Honey Napkin by Renulek. She nearly gave up on Round 15 which didn't look right. It turned out to be a missing join on round 14. It's currently languishing untouched waiting for the enthusiasm to complete it. This is Mary Konior's Spinning Wheel Glass Mat with the larger tatted in perle 8 from Madame Tricote Paris (Made in Turkey) colour number 187 and the smaller one is tatted in Metallic Machine Embroidery thread that she tried as an experiment, but it was awful to work with. The next motif is from Occhi Schiffchenspitze Frivolite (The Peacock Book)tatted in the same threads. Mary Konior's Posy is done in Lizbeth #40 thread, Autumn Spice. She used some she bought from Tat-ilicious, Whoopsie HDT #40 for this flower pattern from Tatting Patterns by Julia E Saunders. These crosses from Rebecca Jones' book done in Dark Rainbow #20 HDT from Tat-ilicious and black DMC #20 thread for a stained glass effect. 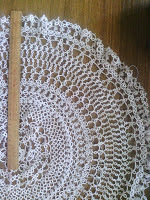 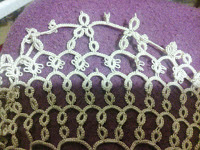 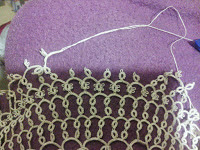 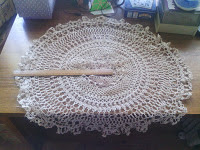 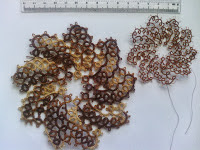 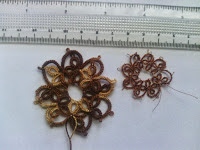 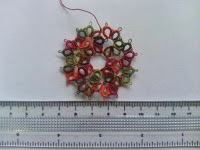 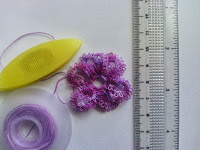 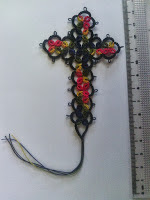 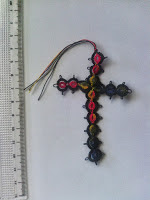 Laurie  attended her first Tat Days sponsored by the Palmetto Tatter's Guild, where she signed up for Christmas Tree Jewelry, the Serenity Angel, Tidy Tatting, 3-D Northern Star, Tatted Owl, and Silver Bells classes. She was able to finish a Christmas Tree earring, and the second one still needs to be made.

Ginny has been busy getting ready for the Canada Tat Days, making this gem for auction or raffle. 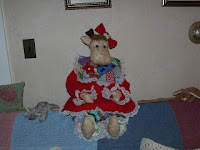 Jessica has made several attempts at this doily from Priscilla Book #1 and she thinks that this time she's got it. The problem may be that she's accustomed to making tiny joining picots so that they aren't really visible and the design seems to need the joining picots to be larger. 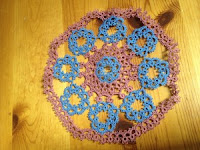 Ancolie has modified an older model because it was too vintage looking. This version has fewer rings and more space. 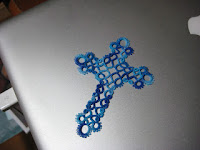 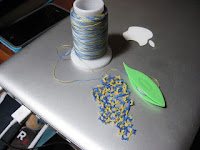 Fox continues to tat the Blomqvist & Persson motif in various colours of Perfect Quilter thread which is very fine and has resulted in her un-tatting and cutting one of them at least six times. S he is not going to continue the Ellen Stafford pattern, since she got halfway through the next round and realized she didn't like it. Fox met Terri at a local craft store and the talk turned to tatting. When they met up again Terry had learned to tat and this is her first project. This all chain pattern is from the Occhi Peacock book that Fox tried to use up some thread on the shuttles. Angelina's book has made it's rounds and is back home again. Three more motifs done in some different colours of the Perfect Quilter thread, and she loves the greens. Here's all of them together in their glorious riot of colour. Then for a total change of pace from very, very fine thread, to chunky size 10 for the next project. 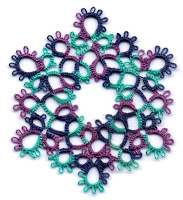 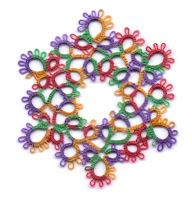 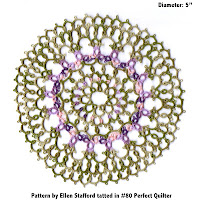 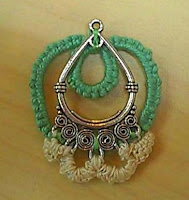 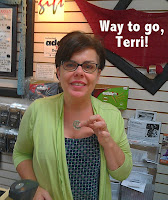 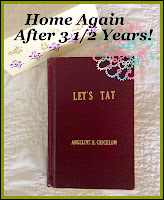 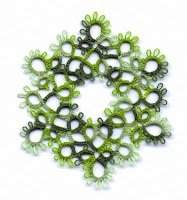 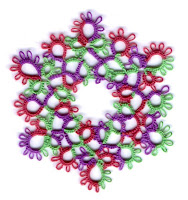 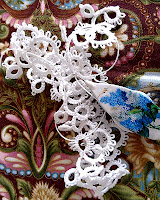 Marie received "Tatted Doilies", by Iris Niebach for her birthday.  This doily was tatted in Lizbeth, size 20, Denim Whispers. 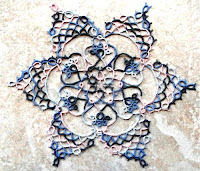