Diane finished Kencana from Elegant Tatting Gems by Jon Yusoff and it's looking lovely. As a break from knitting she started another snowflake in size 20 Lizbeth Blue Ice. 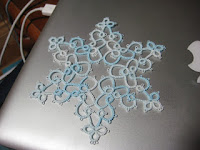 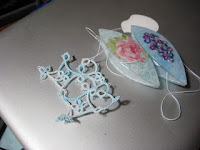 Fox was inspired by the lace collar on Justice Ginsberg's robes and wanted the collar to look exactly the same as the one in Jan Stawasz's pattern which she tatted in size 10 thread. Sadly the thread was very coarse and rubbed her skin raw. 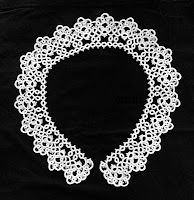 Martha wasn't teaching at Palmetto's so she got to take lots of classes. Here is the amulet bag taught by Erin done in some HDT by Karey, but she still needs to make the strap. Kaye Judt's 3D Bee was a very fun introduction to bobble style tatting. After the Friday night banquet, Riet always teaches the Night Owl Class, which is usually about owls and this year's project was a cute little own designed by Jane Eborral. The Early Bird Class, led by Donna led was the "No Where Maze" by Vicki Clarke done in more of Karey's HDT. A class taught by Vicki herself, was her 3D Northern Star. Randy Houtz's Pearl Tatted Dragonfly really stretched those mental tatting muscles.  They are Maltese/Pearl Tatting rings, but each is special. Here is a picture from some of those working on the amulet bags Saturday night. 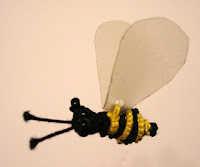 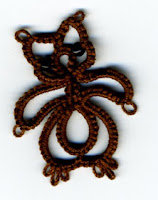 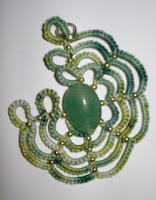 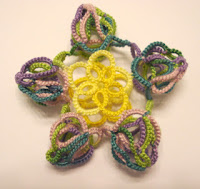 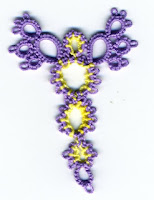 Hi Sharon,
I'd like to start the 25motif Challenge too. I had done it in 2008 and I was blogging about it on my other blog http://aisgetscrafty.blogspot.com. I have since clubbed all my stuff together. The new challenge will be here: http://wordsnneedles.blogspot.com/2013/09/lets-get-tatting.html