Cigdem used Lizbeth in Fudge Dk and blue beads to create this necklace using a design she created called verbena. Of course what's a pendant without matching earrings. 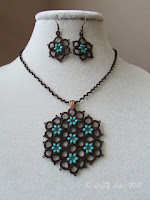 Jane has been exploring encapsulating a bit more. It can be quite fiddly to keep branching bits out of the way, but encapsulation has a lot of potential. 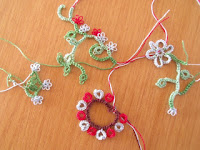 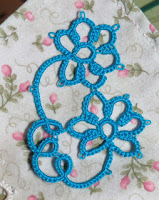 Julie has another vintage find; a dresser scarf with motif insets and border edging. 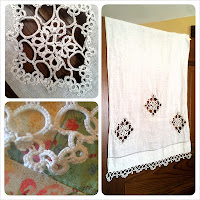 Diane took a couple of tries for this one but now that it's done Jon Yusoff's Galuh from Elegant Tatting Treasures is one she really likes. 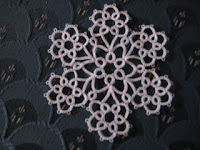 Fox is just over half way through the first row of the Trellis Doily, but she's not enjoying it. Maybe it's the twisting.

IsDihara started the octopus from New Critters on the Block by Martha Ess, but a slight distraction resulted in 9 legs and Nonny the Nonapus, done in Lizbeth size 20 Magenta Dk 618, was born. His cousin the octopus is still in progress in pink. This also finished Isdihara's second batch of 25 motifs.

Marie tatted around a pair of light green cats-eyes cabochons to make these earrings. Pink, muscle shell cabochon was tatted around using two strands of metallic copper, Gutermann thread for this pair of earrings. 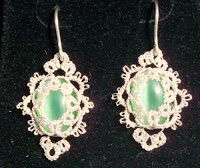 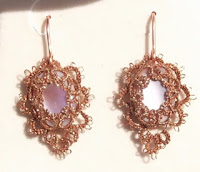 Mica tatted Minitats 55 - 59 in DMC Special Dentelles No. 80 in ecru. The first one is her favorite, the last is supposed to be a candy cane and the picot size didn't work so she's calling it a snake.

Sue was asked to share how she attaches her tatting inside a bangle bracelet, so she has produced a step by step tutorial to show how it's done. 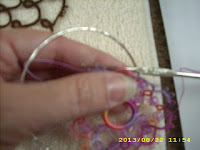 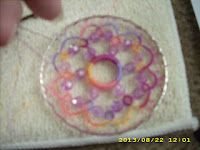 I would like to join. Can I use an album in shutterfly? I don't have a blog.
Fredi Brown fredericabrownphd@msn.com