Jane has mastered square rings which is a novel technique that doesn't have many uses, like maybe for a kite, but it's still worth having in your repertoire. She used encapsulation  to tat a 'bezel' for this glass bead owl  made by her sister-in-law. She wanted it to look like the owl was sitting in a flowery tree. 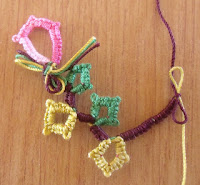 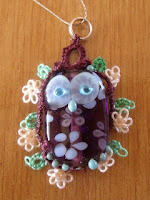 Ginny has a doily idea using findings. This is the centre motif and one from round 2. Joining it all together will be the challenge.

Jessica has another veil completed and the pattern done for it and posted. 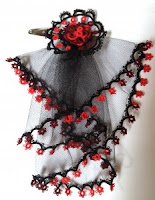 Ancolie has a whole bouquet of flowers tatted is assorted colours for her latest "motif".

Diane was happily tatting Galuh from Elegant Tatting Gems by Jon Yusoff, when she realized that she had too many rings in the centre. She had missed a join and created an extra ring which was easiest to fix by starting over. 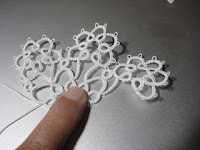 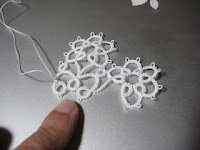 Fox is making some progress on the Trellis Doily although it seems it has required numerous tries. Berry Burst HDT by Tatskool that she received from Suneeti was an irresistible thread to try out a Karey Solomon pattern with both split rings and split chains. After which she tatted a small motif from Frivole’s Viola pattern, and then a vintage-looking bit. Fox has posted her Pine Plains Picot pattern in her Etsy shop. These are the test samples done by Kelly, Amanda, Phyllis and Mary. 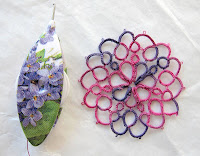 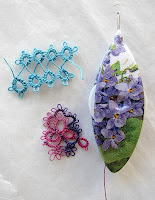 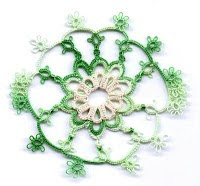 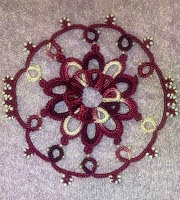 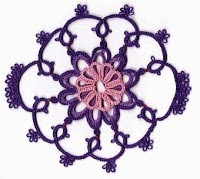 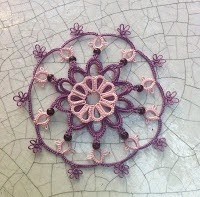 Marie tatted this little motif from The Tatted Artistry of Teiko Fujito in size 80 thread trying out this little shuttle from Two Shuttles. Marie tatted around these blue cats-eyes with two strands of Sulky, metallic silver sewing thread to make these earrings. 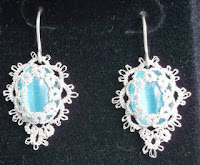 Martha tatted Karey's 1919 Square Medallion from the May issue of Tatting Times just to have something relaxing to tat. Progress on the upcoming fantasy book continues and she hopes to bring a box full for her consignment table at Palmetto Tat Days. 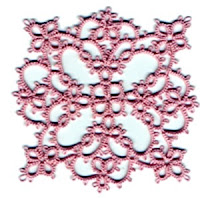 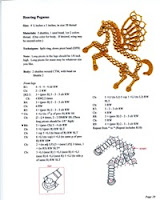 Sue tatted Pinkie Earrings from Tattingbox in size 40 Lizbeth Peacock Blues improvising replacements for the tear-drop beads and omitting the seed beads. She did a test tat of the Lantana pendant in size 40 Lizbeth Elderberry Jam. 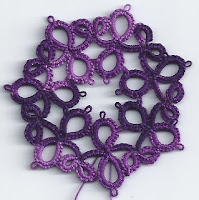