Mistene has worked some more of the Mary Konior designs. Reflections 1 done in Lizbeth No. 20, Color 620, Azalea Medium and Reflections 2 tatted in DMC Cebelia No. 30, Color 210, Lavender, are mirror images on one another. 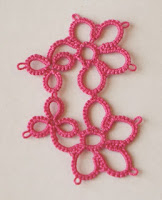 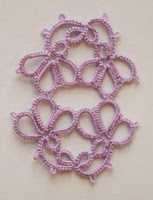 Jane tatted the Wood Rose from Usha's pattern using her unique pattern format. In her task to learn 25 new techniques for the challenge, Jane has been working on inverted tatting. The flower is her first attempt at creating something using this technique. 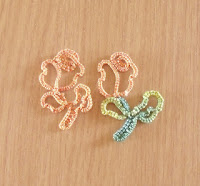 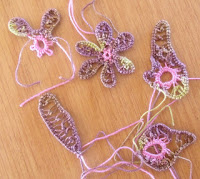 Ginny shows two of her entries for the New York state fair. She has 5 items entered but didn't take pictures of the others. She'll post how she does when she has the results. 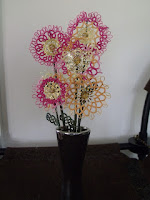 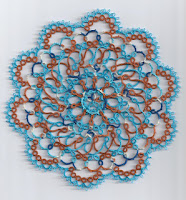 Marta harvested these turquoise beads from another necklace and captured them in a net of black tatted lace. 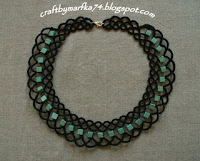 Diane's Mom, sister and Tatting Marie joined the Tollway Tatters and there was tatting, teaching and a terrific time had by all. Marie loves Mary Konior's Spinning Wheel Glass Mat as much as Diane does, as can be seen by the collection of them here. Then there was this stunning doily and lots of tatted jewelry that Marie brought. Marie gave each of them a colorful little bag with a tatted motif stitched onto it and tatted treasures inside. 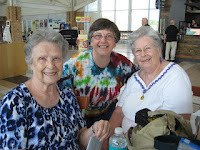 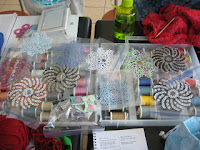 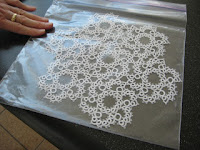 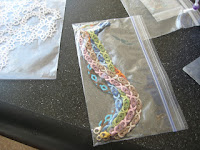 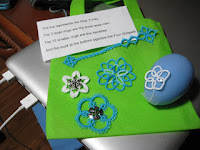 Fox tatted Linda Davies’s Star Attraction Doily in very different colours than what Miranda has. There's a mistake in it and as we all know, Fox doesn't take kindly to mistakes. She started this doily in size 80, but it was very trying so she switched to #40 Lizbeth and Altin Basak pink #50. It's a good thing Fox has some sharp scissors. Fox' daughter grows lavender and she has been giving away little sachets adorned with tatted motifs Fox has done. The Canal Bookmark updated by Elaine Scott from the Ring of Tatters Newsletter 2010 is done in Lizbeth #40 and Zwicky silk, brown. The dastardly doily has had it's drubbing and been cut down to size. After a deep breath, Fox can start again. 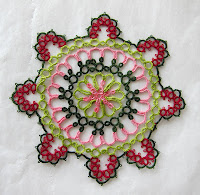 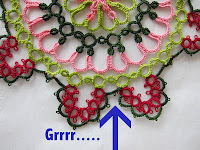 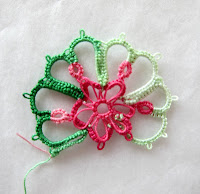 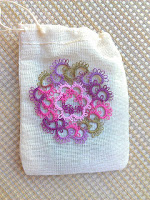 Marie liked the pink and grey combination and thought she'd try purple and grey. Of course it needed earrings to match. Then she thought she'd do one in 3D with an inner ring at right angles. 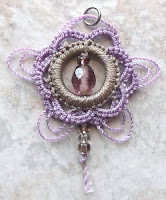 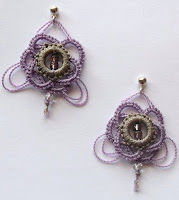 You certainly do have a way with words!
Fox ; ))