Cigdem designed this pendant in 100% rayon viscose thread, which is a very silky 3 ply thread, that is almost same thickness as DMC size 5. There is a coral shell bead at the center and Swarovski beads to add sparkle. 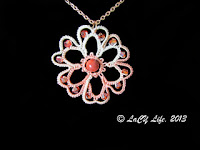 mb duke loves the swift colour changes of Jess' Rainbow-licious HDT as can be seen in Jane McLellan's bookmark pattern that she did size 20 thread. 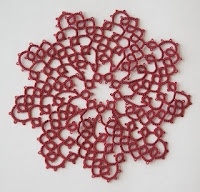 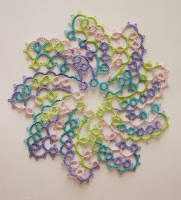 Sharon has decided to start Eileen Stafford's Clover doily using some of Karey Solomon's HDT. Round 2 is done and she finds finishing ends is easier when she remembers to put in magic filament loops and put a thread loop to hold the place where the final join will be. Climbing out with split rings and split chains saves thread and eliminates hiding ends. 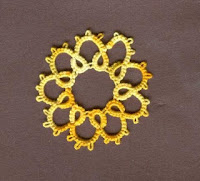 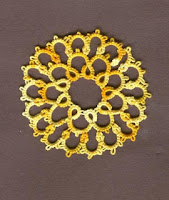 Jane thought one of the inverted tatting doodles looked like a dragonfly wing so she gave it a test run in blue, then tweaked it and did the one in purple. She re-made the flower in one colour so as to have fewer ends to deal with, but thinks it looks better with a contrasting ring in the middle. Then she added a lock chain stalk and some leaves. She made a 3D flame lily using inverted tatting, Victorian sets and downward picots. She has been experimenting with layered or ruffled picots which gave a very frilly effect. Next she joined to the bottom picots to form a flower. When she joined to the top picots for the second layer it scrunched up. The pink flower came out very ruffled. For the next one she added normal double stitches between the half stitch ones and it worked. 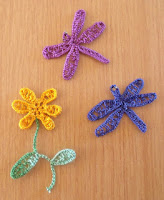 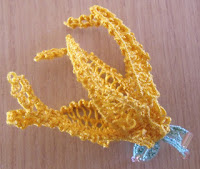 Marta used green stones sheathed in black like the claws of a predator for this necklace. This necklace of violets was derived from a design in the Tatter's Treasure Chest. 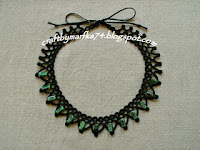 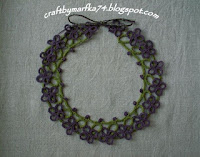 Diane tatted Adan, which is the second pattern in Jon Yusoff's Elegant Tatting Gems. Then she started another design...which got snipped. Started again... and snipped again. Set it aside for some knitting, and the successfully completed Almas from Elegant Tatting Gems by Jon Yusoff in size 20 Lizbeth. 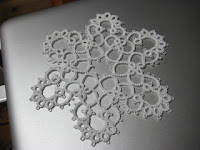 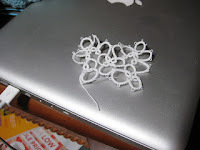 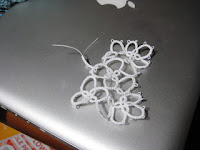 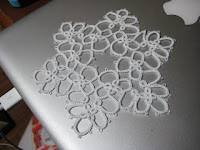 Fox loves Perfect Quilter thread which she had never tried until Liyarra sent her a sample. Before she decided to snip the Linda Davis doily, she gave it a whirl in different colours. you can see them side by side here, but she's getting fed up with the pattern and may not continue. Then she tried out a pattern being worked on by Frivole and Janemactats which has her intrigued. Here's the progress on her Pine Plains pattern. 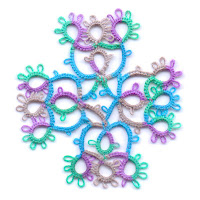 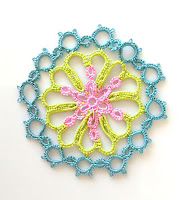 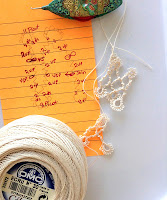 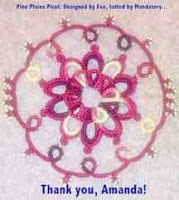 Margaret's tat along with Wendy is progressing. Round three is finished and looking lovely. 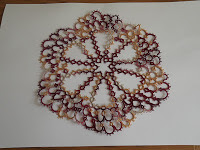 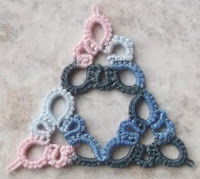 Mica has done Minitats 50 - 54 all in DMC Special Dentelles No. 80 in ecru. She did a metallic version of Jon Yusoff's Circle of Crowns, with 1 strand of DMC metallic floss. 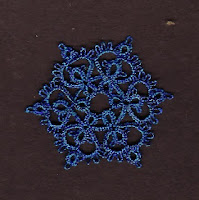 Michelle saw a little cross which on West Pine Creations and had to try it in Lizbeth Dark Purple and White. 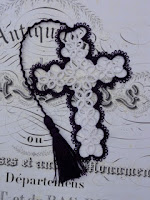 Sue tatted around beaded garlands for some artificial Christmas wreaths she wants to decorate. She tatted this dream catcher before vacation, but finished the addition of the feathers last night. She used a bangle bracelet and the thread is size 40 Lizbeth Autumn Spice. 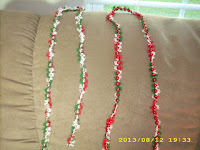 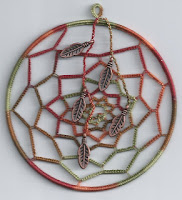 Wanda made Jane's stork for a baby shower gift a couple of years ago, however a 2 year old and a pair of scissors did some amputation. Wanda was able to rescue it and repair the damage. 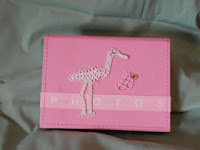 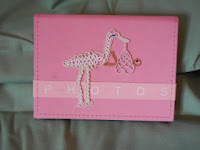