mb duke has finished the bookmark by Jane McLellan, in  Rainbow-licious HDT thread by Tatilicious. She has also finished Doily X by Jan Stawasz, using Aunt Lydia ecru and Lizbeth Garnet  threads, both size 20 and finds that tatting marathons are giving her aches and pains. She decided to try out the Perfect Quilter thread by tatting Mary Konior's Flower Fragments and she simply loves the thread even though it's quite a bit finer that the size 20 Lizbeth she's been using. 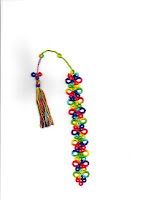 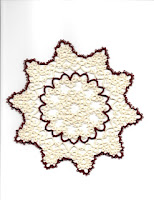 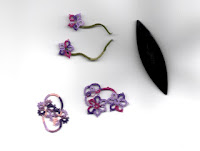 Sharon has round 3 of the Clover doily done and she's hoping it will keep her interest for another 6 rounds. Round 4 is completed and she is enjoying tatting it as each repeat is easily memorized, although each round does get larger. 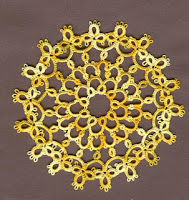 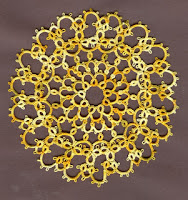 Jane's latest technique tryout is a square ring and she managed to create an earring, but thinks she needs more practice before she can make something useful with the technique. She has also written out her pattern instructions for the dragonfly and it's available from her blog. 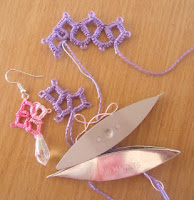 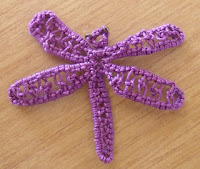 Linda is following Nancy Tracy who has begun part 1 of an oblong doily and Linda is looking forward to part 2. One of her favorite motifs on a crazy quilt is Jane Eborall's wheel barrow. This one is done and ready to be filled with silk flowers.

Cindy has done a bit of practice and thinks she's ready to try the Victorian Trellis Doily, which is an unnamed doily from the Priscilla Tatting Book which has lots of Victorian sets and SCMRs.

Diane received a sample of size 80 DMC thread along with a shuttle from Imoshen to try out. She's using it to tat Mary Konior's Leaf Braid from Tatting with Visual Patterns. She's been enjoying tatting snowflakes from Jon Yusoff's Elegant Tatting Gems and loves the way Cintamani flows. 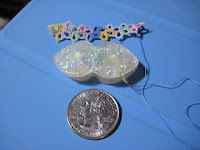 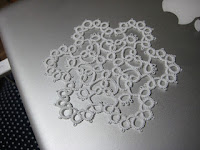 Fox tatted this pattern from Lindsay Rogers’s Mastering Tatting using silk thread she received from Suneeti. She received an awesome gift from Sally; a charming box to hold a Silver Maple shuttle and a wonderful bookmark. The little flat shuttle she's saving for the "Boss". 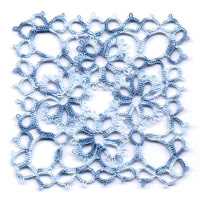 Margaret tatted Sandra's Dainty Heart in white  Lizbeth thread No 20 to add to this anniversary card. She and her husband are celebrating their 11th anniversary. The Tigereye earrings pattern by Elizabeth Zipay is a current tat along on intatters. These were tatted with Lizbeth thread no 20 in white, and the beads were gold and multicolor black seed beads. 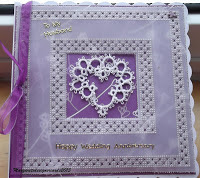 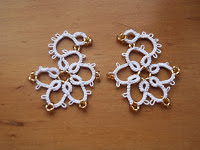 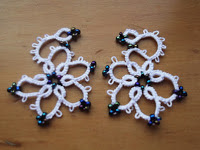 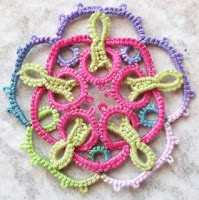 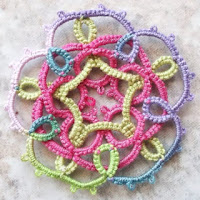 Michelle has been making progress on the runner using Frivole's beautiful Quatrain pattern. This has been a long term project and she's about half way through, but with practice, her tatting has improved and the earlier motifs show the contrast. 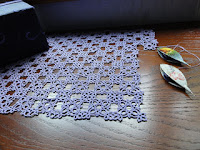 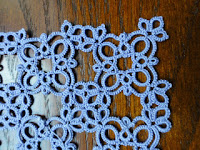 Sue used Lizbeth size 20 Caribbean and Lilac Dk to tat this SSSR bracelet for a friend.