Barbara has joined the challenge again with a whole lot of tatting, particularly tatting with buttons. This design from Karey Solomon's Tatting with Buttons was done in size 40 HDT and she turned it into a pendant. The heart pattern is from Debi Pennington and she used Lizbeth Size 40, #127 Butterfly Breeze. Another pattern from from the book Tatting with Buttons by Karey Solomon was done in Lizbeth thread size 20 which she made a mistake on and tatted it twice. The design using a star shaped button is one she designed herself. The little red heart is another design from Tatting with Buttons. She designed another button motif and turned it into a fridge magnet and gave a pair of them to each of her friends. The next pattern came from Lisa Trumble's This 'n' Tat web site and she used Lizbeth size 20, Linen - Med. for it. Then she picked up a design from the internet and tatted it in different colours. She also tatted a bookmark from Karey's book, but she won't be satisfied with it until she adds a tail. 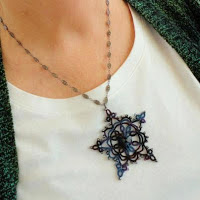 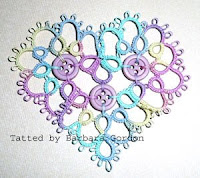 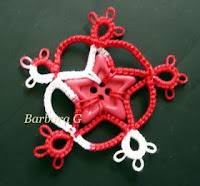 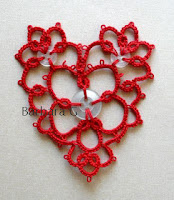 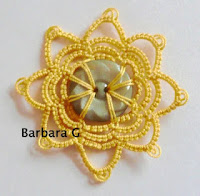 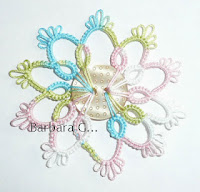 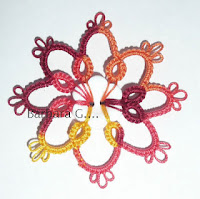 Jane is thrilled to have orders for tatted earrings. The pair of hyperbolic tatting on the left are made in
Tat-ilious rainbow size 40, and the pair on the right are done in Olympus thread size 40. The other orders are for her pattern of flower earring done in Coats, size 40. 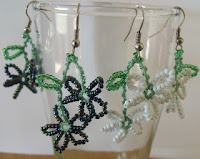 Julie tatted Mary Konior's Small Cross in size 70 vintage navy Star thread, with the gold variegated which is labeled "Fil Pour Crochet CtB France" and "Cartier Bresson". Christina from Tatted Bookmarks cross-shaped by Lene Bjorn is tatted in Lizbeth size 20 Navy Blue and Golden Yellow Med. Navy and yellow are the school colours and all 3 of the crosses she did went home with teachers.

Nancy like the Mystic necklace and bracelet so much she did it again, this time in Lizbeth's 'Red Burst' and red seed beads.

Diane finished another Spinning Wheel glass mat from Tatting with Visual Patterns by Mary Konior, this one in size 10 Teenybopper by Yarnplayer. Her variation of The Workbasket cross was started when she was on jury duty and tatted in size 80 Majestic, a very nice tatting thread. Shown next to the same cross done in size 20, you can see there's quite a difference in size. She received this cross bookmark in the mail from Carol, who found it while out shopping.

Fox has finished row 8 of the doily, but found a missed picot early on in the row and had to carefully deconstruct and reconstruct. Now she's wondering how the repair will hold up to laundering. Inspired by the doily done by Jeff, she just had to tat the design from Susanne Schwenke’s “Spitzen-Kreationen." She received this teeny tiny tatted flower done in size 100 thread from an exchange with Rachel. The directional turns in this Iris Niebach pattern has her gracefully laying it aside for another day, rather than flinging the whole lot of it across the room. 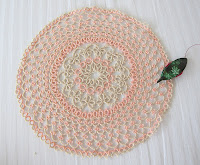 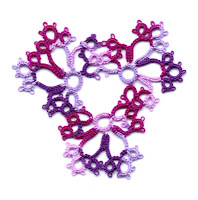 IsDihara tatted Jane's Bookmark Cross in Lizbeth size 20 #156 Juicy Watermelon. She used the SSSR to finish the bottom ring which was a great method of hiding ends. 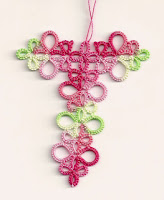 Marie tatted Maria from Lene Bjorn's "Tatted Bookmarks" in size 80 tatting thread for each of 4 children getting confirmed.

Mica is still plugging away at finishing all the ends of the Minitats which were made with DMC special dentelles No. 80 in ecru.