Meryl has finished Rows 7 and 8 of the Honey Napkin. She made an effort to relax and loosen her tension on these rounds hoping that it will help everything to lie flat in the end. 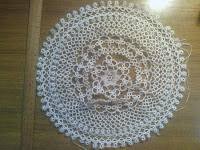 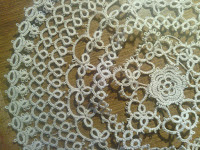 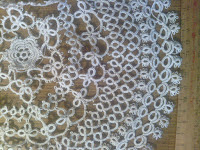 Jane used her own HDT Cebelia size 20 to tat this pattern for a leaf braid that appeared in the Anna Burda magazine in May 1984. The original left a little bit of bare thread between rings, but a better way is to tat it using two shuttles and split rings. This cross evolved from a bookmark pattern she did years ago. The original bookmark was an adaptation of another braid from the Burda magazine. 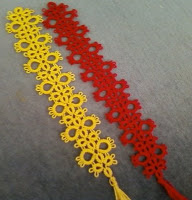 Ginny tatted Martha's new bookmark, although she thinks she tats too tightly for it to lay right. 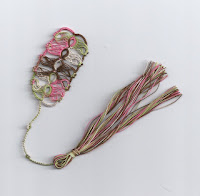 Julie still has the first bit of tatting she did from when her Grandma taught her how to tat. She found an assortment of tatting when she went antiquing. She thinks her favourite is the variegated pink one. The fabric circle doily with the tatted border is done with one shuttle tatting, which is very pretty and has no chains in it. 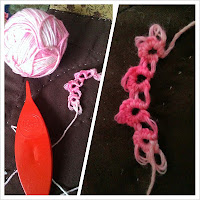 Diane met with the Tollway Tatters and was the first to see Sue's suncatcher. Sue spent their time together tatting around cabone rings, based on a pattern by Jon Yusoff. Sue Anna spent her time working on Mary Konior's Spinning Wheel glass mat in size 3 Lizbeth. Marilee taught Jean to tat and this is Jean's first chain. Carrie has only been tatting since December, but look at what she has already accomplished! Thanks to Patti, Diane now own the original cross pattern that she's been looking for since she began tatting and which she finished in size 20 Lizbeth, colour #621 at the Tollway meeting. The cross on the left is the one she figured out from a picture and there's not a huge difference between the two.

Fox used Elefante Algodon Mercer Crochet thread, #80, to tat Oaks and Acorns by Mary Konior for the edging on this 7 inch fabric square. She added a row of crochet before attaching it because the tatted lace was just a tiny bit too big. The Finca 8 being used for the doily is causing her grief, but it has a plush feel and lovely colours, so she will persevere. Lilac thread has her hoping that she can resurrect Renulek's Snowflake doily and finish that last few rows. The Jan Stawsz doily which appears pink on my screen and orange on others, is actually pale peach and ivory. 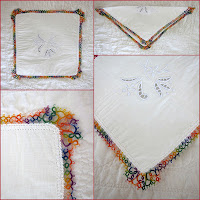 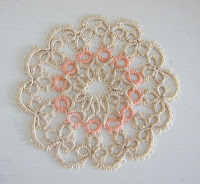 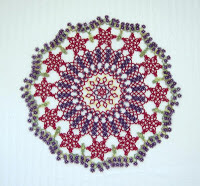 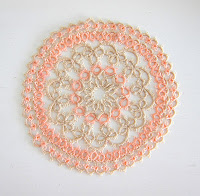 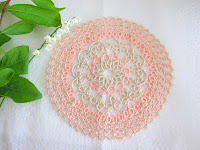 Martha has created a bookmark with long swirly picots reminiscent of broomstick lace. Which is why she named it "Broomstick” Tatted Bookmark. The pattern is available on her blog.