Kristen continues work on the big doily which suggests Sorrento Bars for the fill in spaces. She's having trouble wrapping her brain around the concept. She has in mind a celtic bracelet with intertwining rows.  She did 2 separate rows of ring and chain tatting in complimentary colours and twisted then together. Then she inserted the bald rings inside the frilly picot rings of the bracelet. That done she added complimentary beads as she tatted an outer connecting zigzag row for texture. 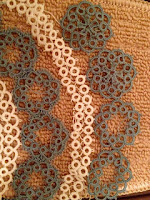 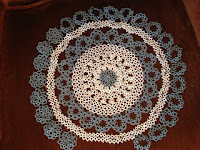 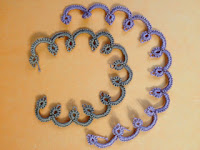 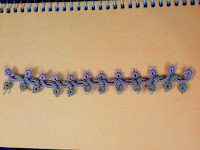 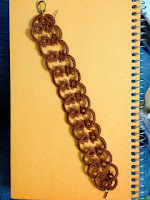 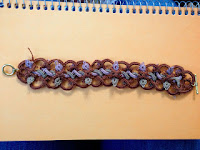 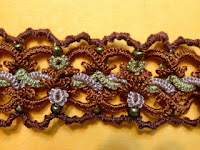 Cindy finished another motif from Jon's Elegant Tatting Gems book, again adding beads. She's not sure what she's going to do with all these motifs, but she's thinking of adding them to covers for her small appliances.

Diane tatted "Sonnenschein" featured by the Online Tatting Class from Happy Occhi by Petra Tornack-Zimmerman in size 20 Lizbeth, Pineapple Parfait #170. Here is the pattern that started her interest in tatting, which is apparently from an old Workbasket. She's tatted it before working from the original, but she really wanted to tat it from the pattern. There is a version of it on Etsy but she was sure she had seen it somewhere else. Sure enough, there's one by Becky Dempsey. Pineapple Parfait is a beautiful bright yellow and the cross pattern just the right size for using up the thread on her shuttles. 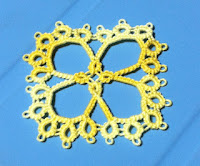 Fox tatted Jane’s Pattern #3 in  Marilee’s Fiery Red HDT, #40 completing a colourful collection of them. She substituted a half inch finding for a button on this one using size 40 Olympus green. Two motifs by Jan Stawasz were done over the weekend helping her to overcome the patterns she found hard to read. She's running out of the pink she stared this one in and will have to use white for the outer rounds. 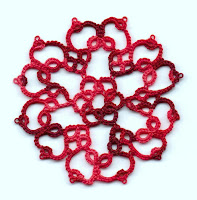 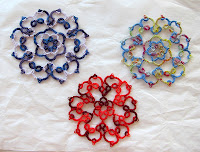 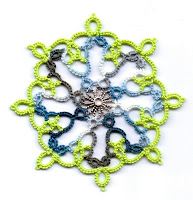 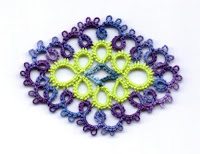 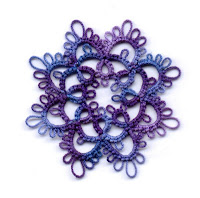 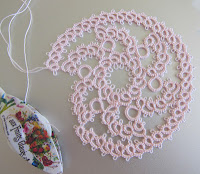 Marie tatted  Bird on a Wire by Sherren Morgan in Lizbeth size 20 thread. 44 song birds for the Church's Hymnals. One of the little birds flew away and Marie replaced it with a butterfly on a paperclip and shares that pattern. 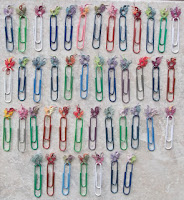 Sherry took Dale's snowflake class at Shuttlebird's and thoroughly enjoyed it. Her 3D Flower Barrette pattern was  one of the patterns she taught. These are some of the variations that can be done with it. She's now working on daisy picot variations. The Owls from Lindsay Roger's Tatting Collage required tatting several separate motifs and joining them together, but by using her branching encapsulation technique she was able to tat it in one piece. Worked in size 80 thread it fit neatly into a paperweight. 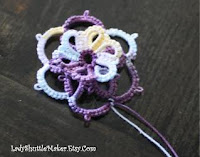 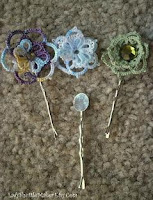 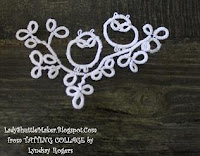 Sue tatted the Small Round #11 from the Ultimate Book of Tatted Doilies in size 40 Lizbeth Island Breeze and Raspberry Pink Med. She plans to tat this again in the reverse with Raspberry for the chains and the Island Breeze for the rings. 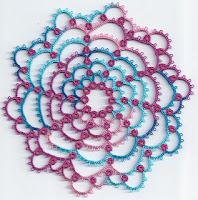 Wanda used Lizbeth #166 Pink Cocoa in size 40 to make this zipper pulls/stitch marker. Oren Bayan Perle Kotton size 8 was used for this one. 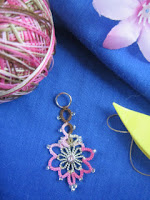 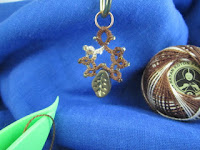 I'd like to participate in the challenge! My blog is at http://mistenetats.blogspot.com/. Thanks!