Gwen finished her clover doily and finally took some pictures of it. She used the flower instructions from Claudia and two different leaf patterns, one from Heather and the other from Frivole, to make some pins for her sisters and nieces to wear on Mother's Day.

Ginny has been tatting bookmarks. The Button Snowflake pattern is by Vicky Clarke, the Owl is by Nancy Tracy, the pink and purple one with the dangle is Marilee Rockley's Carnival Earrings. The next pattern is Marilee Rockley  "Quadrille". The middle of the following picture is Karen Bickerton's and the angels are by Debbie Arnold. The two earrings on the left are from a Russian book and the rest of the earrings are Marilee Rockley patterns. 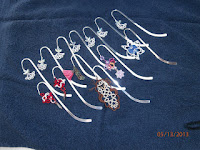 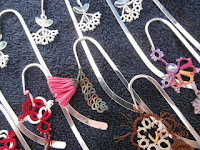 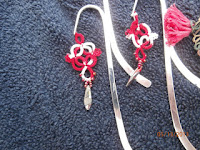 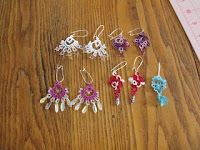 Julie finished Mary Konior's Mark-My-Words Cross in what she thinks is DMC Cabelia, but she's not sure because the label is missing and  the Rachael Mohler Flower bookmark. Then she did pair of hair clips in size 10 white something or other, and yellow that was on the shuttle left from the cross. 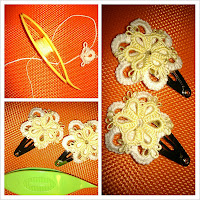 Kristen shows us the slow but steady progress on the big doily. The second row of medallions is finished and the row of chains around them, followed by a row of ring and chain. Now she's into a row of trefoils which is obviously going to take some slow slogging to finish. In the interim she is playing around with interlocking elements; tatting first one motif and then another and adding a row around both. Add another outer round and you get the Celtic Flower from Rozella Linden's Celtic Tatting. 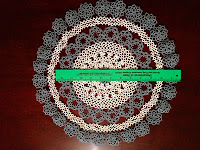 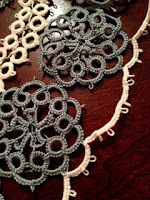 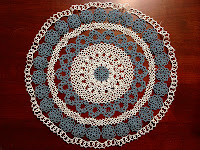 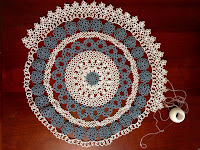 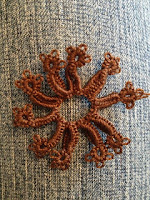 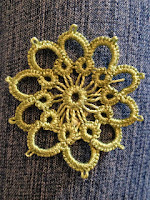 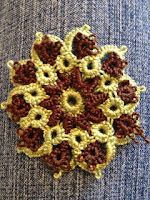 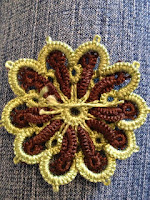 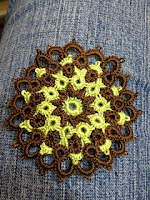 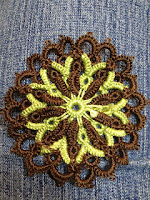 Nancy has another choker and bracelet done, 'Mystic' in the color of Lizbeth's Green Coral Sea, size 20.

Diane had jury duty and during the proceedings almost completed a cross in size 80 Majestic.

Fox used a pattern written up by Karey Solomon from some vintage fragments of lace tatted with some size 30 HDT from Yarnplayer to make this square motif. 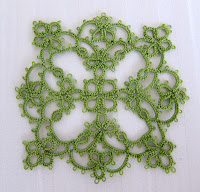 Marie made a bookmark from Sally's Button Egg Pattern in  Lizbeth, size 20, Ocean Turquoise and Salmon.

Mica tatted another black snowflake from Jon Yusoff's collection and has decided it's her favorite one. Made with Lizbeth size 40 in black. 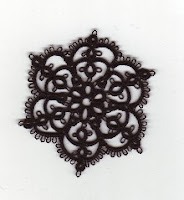 Orsi designed this baroque cross which she plans to put on a velvet paper, and in a gold frame ready to hang. This is the last motif in her 25 motif challenge. 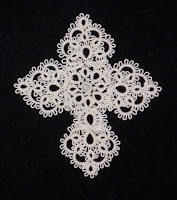 Sherry has designed another retro 20's style headdress. This one she has named "Helen of Troy".

Wanda made the butterfly out of Oren Bayan size 8 thread, the flowers out of miscellaneous Lizbeth thread from emptying shuttles and mounted them on a button, then added a pinback to make a gift for her mother. It came out so well she made a few more. Then tried it again with some different types of buttons. 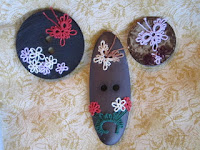