Jane tatted these tea cloths with the edgings and motifs some years ago. They were recently returned to her having been much loved and used. one of the motifs comes from the Anna Burda magazine, but she doesn't know where the triangular one comes from. She has re-worked the design and posted the instructions on her blog. 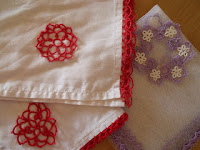 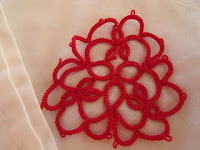 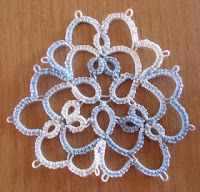 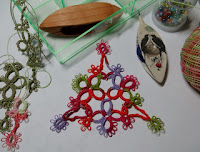 Julie finished Mary Konior's Small Cross and just needs to finish it off with a tail. She has been in a marathon tatting crosses and discovered that she needed a few more in a real hurry. These two were done in Size 20 Lizbeth in Sea Scape and Jelly Bean.

Diane posted the unblocked version of Doily VI from Tatted Treasures by Jan Stawasz done in size 20 Lizbeth, Latte Foam. Unblocked because she has misplaced her blocking board. She also finished the pink cross that had been languishing in an Origami pouch.

Fox began a Jan Stawsz doily with Finca size 8 in salmon pink and since reloading shuttles was such a bother doing the Honey Napkin, she has ordered some larger shuttles. Frivole's tatting has inspired her to brush up on cluny tatting. She has also made progress on tatting for the linen square. 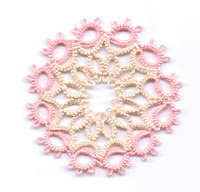 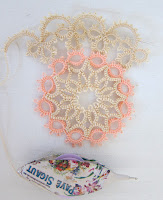 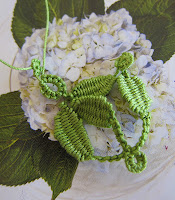 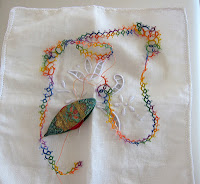 Mica was delighted to find the cicada pattern on line and tatted it in Lizbeth size 40. 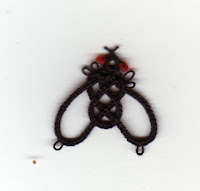 Orsi created jewelery using a section of her cross's reborn as earrings. Larger sections were formed into a matching pendant and she has named the set Trinity. To celebrate reaching 150 followers on her blog she's having a giveaway of this tatted set. 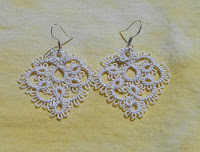 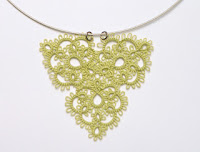 Sherry has posted another version of her Empress headdress, this time with colour changing beads.

Sue shows a picture of the doily given away on Facebook and the second doily done in reverse colours. 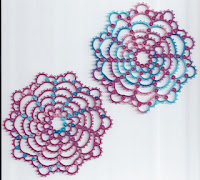