Lelia tatted a heart for a friend in size 20 Lizbeth, colour 620 using a pattern from Patti Duff's Minitats. 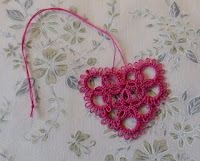 Julie tatted the Frilly Shamrock by Susan Taliaferro which she likes a lot. Then she tatted Shamrock by Jon and another of the Lucky Seven Shamrocks by Gina Brummett. She is currently tatting a cross in some vintage DMC size 70 thread that is lovely to work with.

Kristen continues to work on her "carpet" motifs. She initially tried working the long side, but that didn't work out very well as the connection didn't work. Another chain/ring/chain was added to complete the side. The change results in a 16 piece design instead of a 12 piece one. Finally it's complete. So now she's started over to write the pattern. Then for a change of pace, she has been working on her mat and has 5 of the 9 sections done. 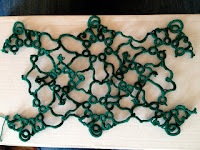 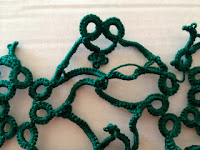 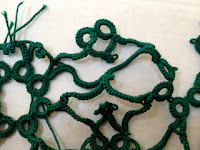 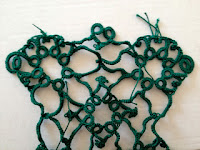 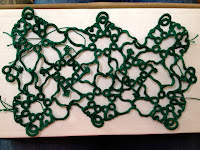 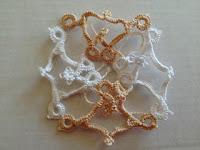 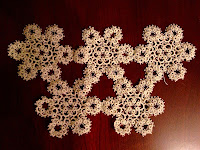 NancyD has tatted a doily from a German pattern for a cellphone holder, along with the familiar Mary Konior's Glass Mat from the book Tatting with Visual Patterns.

Cindy finished one of Elizabeth Zipay's Tiger Eye Earrings last September, and she just got around to finishing it's mate now. 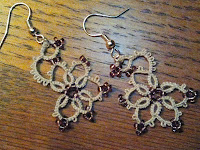 Diane made a little progress on the Doily VI from Tatted Treasures by Jan Stawasz. A little more time was spent on Spinning Wheel in Teenybopper HDT from Yarnplayer. She recently ordered one of Jane Eborall's Wrap It Flip It Mark It bookmarks because it was blue and she couldn't resist it. Also included in the package was one of Jane's button snowflakes. 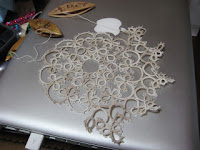 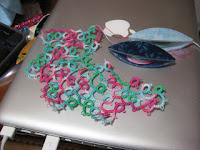 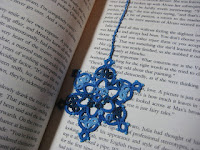 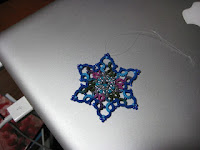 Fox tatted this lovely Nancy Tracy Design in Olympus #40 made even more delectable by her new shuttle from LaCossette. She's finding Jan Stawasz squares particularly tantalizing, especially when done in #30 Karey Solomon HDT and green Olympus #40. She's noticing an improvement in her tatting after the marathon of tatting with Finca thread. A surprise package from Denise included some lovely tatting. Then with the #50 Altin Basak metallic thread she received she tatted this angel from the little Angel book. Terminating tedious tatting troubles has caused Fox to wax poetic. Now she has the beginning of a Karey Solomon pattern from her new doily publication. And on a higher note, the pattern for Elizabeth is now in her Etsy shop. 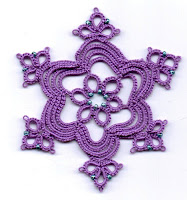 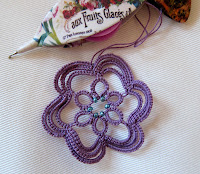 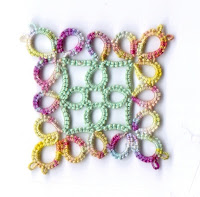 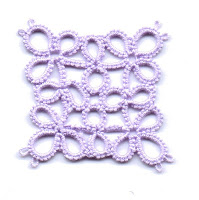 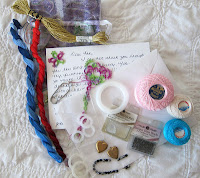 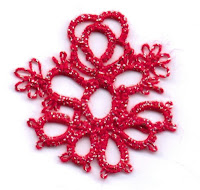 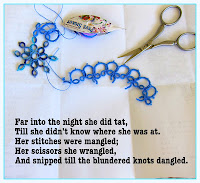 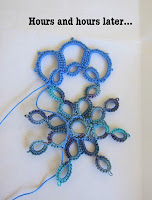 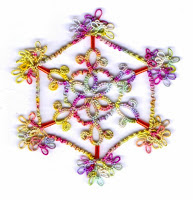 Frances received Masterpieces in Tatting by Ben Fikkert and then tatted the pattern 40 tulips from the book, with the rainbow HDT perle 5 cotton. She had to add a contrasting green for some chains at the outside, and yellow for the tulip centres, so that she had enough thread to finish it. 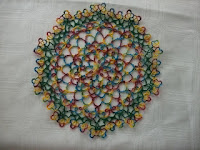 IsDihara set aside her TIAS buggy to work on her gingerbread boy, which is still languishing in her tatting corner. She thought drawing a digital diagram would help, which it might have, but the computer wouldn't cooperate. She switched to designing with her shuttles instead and the end result is a penguin head. 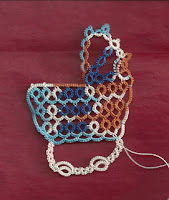 Marie already has 4 feet done of this edging from Tatting by Anne Orr in size 10, gold crochet thread, which will be the border of the  Church's new alter paraments. There's only 3 feet to go.

Mica tatted the Double Star Snowflake from Tatted Snowflakes by Vida Sunderman with Kreinik braid no. 4. 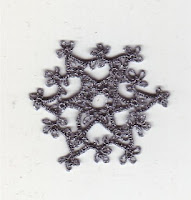 Michelle saw the most adorable shamrock on Julie's blog and thought she'd try it, gimpy hand and all, but some variegated threads don't work well with some patterns. 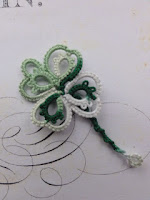 Orsi has a new necklace design which isn't exactly what she was striving for, but still quite pretty. She loves to tat jewelery, because it's quicker than tatting a whole dress and this revision to her earlier design has an art deco feel to it.