Jane had some size 40 green left on her shuttle which was  a good reason to get on with Jane Eborall's Flowery SCMR bookmark which might work out for a competition, but it needs a tail. The pattern says to make the tail and cut, but she wants to do it in one piece and finally settled on using daisy picots. Following another suggestion she used 2 shuttles wound in pink for the flower, a shuttle and ball for the green and finally has what she was looking for. 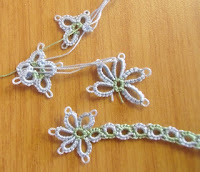 Linda tatted Nancy Tracy's beautiful cupcake the blue cup is 658, Ocean Turquoise; Frosting is 154, Wild Flower Garden; The cherry on top is 671, Christmas Red all done with Lizbeth size 40. The medallions shown below the cupcake are from Nancy Tracy's February newsletter, but she added the bead while tatting the center and did not add the outer edge.  Her new project will take a year to complete but the simple all ring design is easy to work with, although there will be a lot of ends to hide. 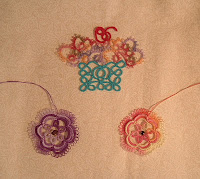 Ancolie longs for spring flowers in her garden, but since they aren't here yet she tatted one. 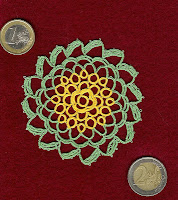 Diane is halfway through round VI of Doily VI from Tatted Treasures by Jan Stawasz and realized that she was running out of thread. The motif is #2 from Minitats by Patti Duff. The one on the right is a mistake motif, where she  didn't make the center picot large enough to join a sixth ring and settled for 5 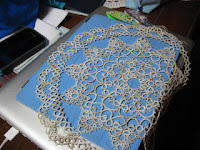 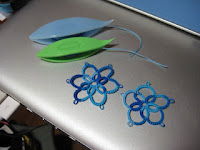 Fox is beginning a new Karey Solomon pattern from her new doily book, and it is going to be rather big in size 20 as she much prefers size 40 or 80. 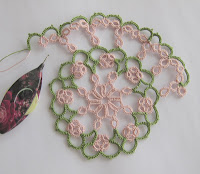 Jess finished her pillow adorned with various bits of tatted motifs and edgings done in her own hand dyed colours.

Marie has finished tatting 7 feet of edging for the altar using a pattern from Tatting by Anne Orr.  It's made with size 10, gold crochet thread with a gold filament. This pair of earrings is from Iris Niebach's, Just for Fun, Tatted Jewelry done in Lizbeth, size 20, Vineyard Harvest. 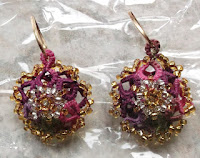 Sue's green project continues to grow, one row at a time. 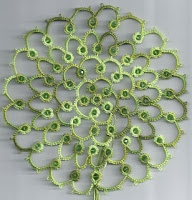 Wanda was given some findings to see what she could do with them. She created this lovely design and attached it to her hat. She had the idea for while to make a bracelet with buttons and finally found a combination of buttons and thread that she liked.