Jane is doing flower bookmarks for a competition using patterns like Jessica by Kersti Anear. She did it again in one colour, so that she can have ball and shuttle CTM and cut down on the ends to hide, but she prefers the 2 colour effect. The Floral Tatted Bookmark also by Kersti she likes better in monochrome. This next one she's had on her computer for a while and she's not she where it comes from. Then there is Flower Bookmark by Rachael Mohler, followed by a repeat of the bookmark where she joined all of the rings to a large centre picot. 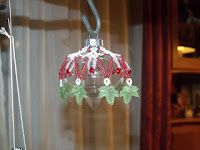 Kristen continues to work on her big doily, but tension seems to be an issue as the doily seems to want to cup. After blocking it seems more behaved. While it was blocking she pulled out her frilly doily and took another try at flattening it, but decided that it just wasn't worth it and started again. After the first 2 or 3 rows it's looking all right especially as compared to the first version. So she continued on adding white accents to the blue and so far so good. Now she's on to the medallion row of the big doily and things are looking up. 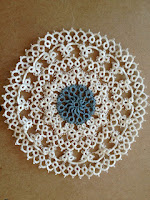 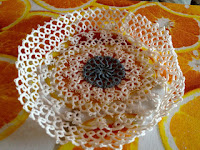 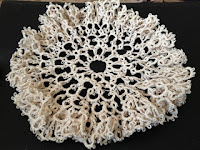 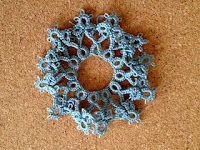 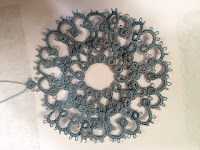 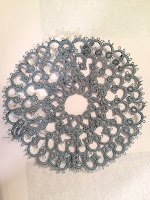 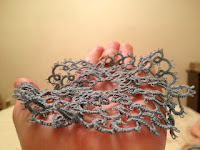 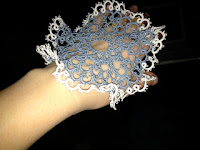 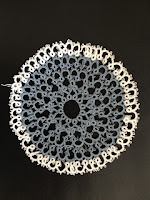 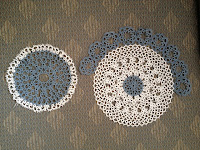 Nancy is hoping to have a pastel flower garden done by Easter. She's using  Lizbeth size 20 thread. The first flowers is made and each one added as it's done. This is the one she did first. Here's an idea of how it's joined. Here is the completed garden full of pastel springtime flowers. 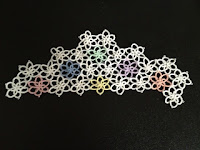 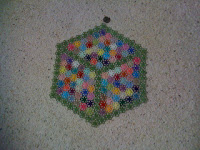 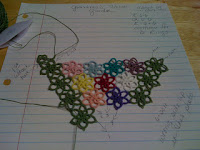 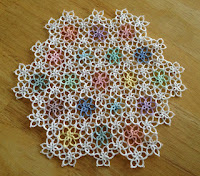 Diane started working on a wedding hanky joining as she tatted, but somehow she left out a chain and she's decided to start again without attaching to the hanky as she works. She might have made better progress, but she kept getting distracted with baby updates. 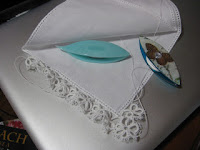 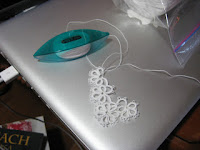 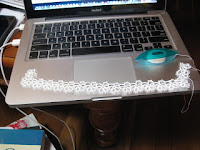 Fox has watched the You Tube video endless times, but she's still not convinced that she has this tatting done right. 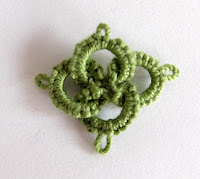 Jess has another sewing project on the go, this time in Rainbow. She has half of one of her flowers in size 80, then the center of Debbie Arnold's Square doily in size 20 and size 100 in the center along with a size 40 edging around some rainbow yarn. Marilee Rockley's Quadrille Earring design are done in her Coconut Island HDT.

Kathy has posted step by step pictures on how to tat interlocking rings. I'll let you look at her ring by ring posting, but here is a sample. 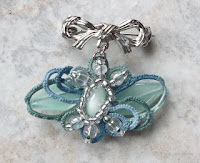 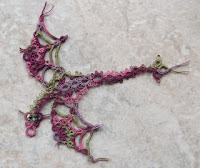 Orsi tatted her most recent design again, this time in off white size 20, mercer crochet cotton and the thread quite firm so that the necklace is stiff enough to stand on the points. 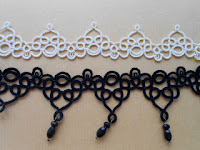 Sue made these 2 suncatchers a while ago but she's just got them mounted. The first is size 40 Lizbeth Blue Ice with beads and a snowflake finding in the center.  The second is size 60 Tatskool's HDT Flame Lantana with crystallized Swarovski Elements bicone beads. The green suncatcher that she's working on is getting larger by stages. 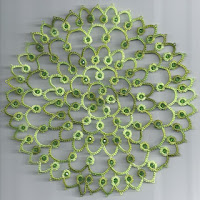