Jane tried the alternate method for tatting Lenore English's Celtic Bookmark and she thinks it makes for less distortion of the lace. Here are both halves of the finished bookmark, looking better done in just 2 colours. This is the third bookmark which was done in size 40 thread instead of the size 20 specified, tweaked a little to fit better and she has posted her notes for anyone interested.

Lelia has tatted shamrocks for St Patrick's day using Irish for A Day pattern by Sharren in Lizbeth size 20, colour 175 Scottish Thistle. She enjoyed tatting this pattern which was made easier with the use of hackle pliers. 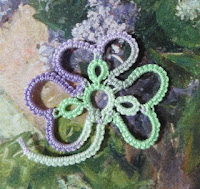 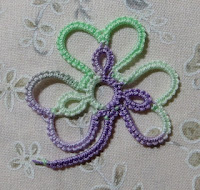 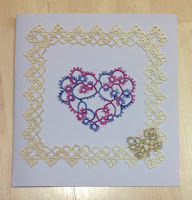 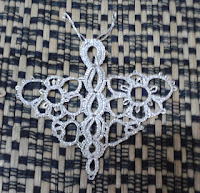 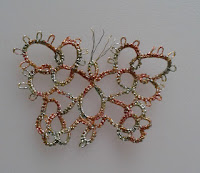 Diane thought she'd design tatting for eggs, but after a couple of tries, she's decided to go back to working on her  Jan Stawasz doily. 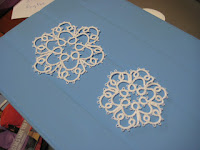 Fox tatted this edging to use up some white thread, then found that she had done it before, although the edging done in white left off the outer picots and eliminated a portion of each chain giving the repeats a rounder, more fan-like appearance. Then Fox tatted this motif using Lizbeth #40 thread sent to her from Denise in the USA, the pattern is from Renulek in Poland, the beads were sent from Orsi in Hungary and it was tatted with shuttles by LaCossette in England. This was followed by a heart designed by Martha Ess from her book  Tats Amoré, done in Lizbeth #40, that happened to be on the shuttles. 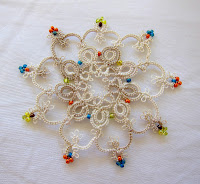 Jess used a bit of one shuttle rings that are not completely closed, tatted with Yarnplayer's Stardate size 40 to add to her fibre art project. 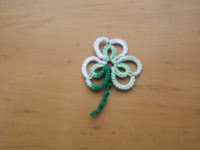 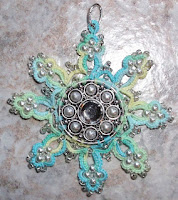 Sherry has been playing with shiny beads and thread, producing an interesting pendant to make an appearance at Shuttlebirds and some more fun with beads. This pattern makes a nice bracelet and will probably also make a great choker. 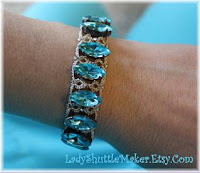