Just a reminder that there are some new sets of round robins starting and now is the time to sign up. Full details are available on the round robin blog.

Krystle tatted Blooming Trellis by Eliz Davis in size 20 Flora and she's not crazy about the colours, but it's what she had on hand. She had good success with Quantiesque even getting the right side, wrong side mostly right, but she thinks she may have to get some new colours because her thread selection isn't working for her. She finally broke down and bought some new thread colours in DMC perle to tat Anne's motif. It will take a few more of these to make the doily so Krystle will get lots of practice doing front side back side and hiding ends. 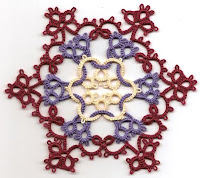 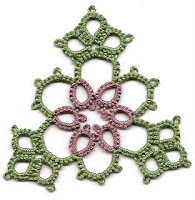 Charlotte tatted a snowflake from the Beginner's Round Robin design on Georgia Seitz's Online Tatting Class website. Then she took a break from tatting snowflakes to tat this cross bookmark using the "Mark my Words" pattern from Mary Konior's A Pattern Book of Tatting, in Altin Basak 50 thread in colour 3052. 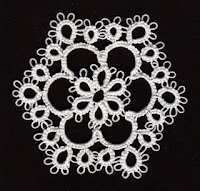 Christine tatted 19 inches of the tatted edge for her tea towel in DMC Cebelia 30 white. She believes the designer is Etha Schuette. She thinks the towel needs a little something more so she's adding two more small hearts The first one is done in DMC Cebelia 30 white and measures 2″ wide x 1.5″ high but she doesn't have any designer info. Can anyone help out? 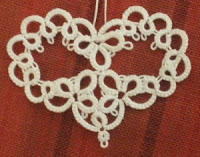 Angie tatted another vintage edging and this sample was done with Cebelia Size 20 thread. Paying close attention to the pattern paid off. Then she decided to take a break from antique patterns and made this bookmark instead. She's up to number 12 and thinks she had better get working on the next thirteen since next week it's back to work and a 70 mile drive one way doesn't leave a lot of tatting time. 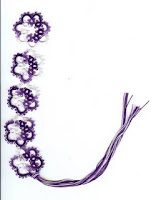 Wanda shares a project that she and her sister co-operated on. She did the tatting and her sister did the embroidery. One was tatted in green and a second in blue so that they each have one. Isn't it gorgeous? 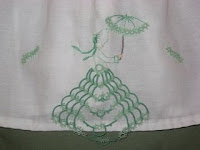 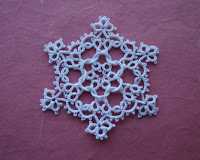 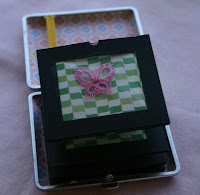 Nita tatted Hearts and Daisies wich she thinks is one of Jon's designs. The two smaller hearts are in an ebook she purchased from Riet. She used size 20 thread for all three hearts and the two smaller ones will make a nice pair of earrings. 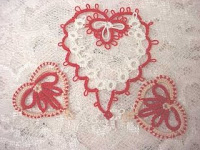 Ais has discovered the joy of tatting with beads. She's not sure what to do with her first sample, but after she saw how Jon made double stitches on a plastic ring, it gave her the start she needed to make her own ornament. 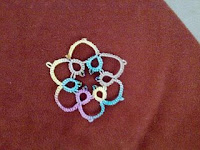 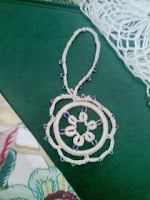 Bev tatted a heart from Jeanette Baker's first book "Learn to Tat" in Marilee's size 20 Lavender Orchid HDT and she thinks it's one of her better efforts. "Heartfelt" from Karey Solomon's "Make Many Merrily" was tatted in DMC size 30 variegated pink. There's a slight mistake in the heart that wasn't noticed until it was scanned. 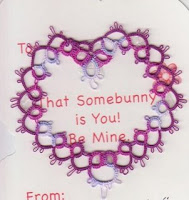 Bob made this design from a book by Julia Saunders in Cronit rayon thread. The pattern was difficult to follow and the thread a stinker to work with but the final results is about a foot across and looks very pretty. 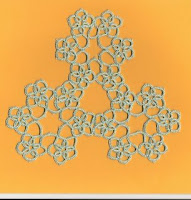 Diane received an e-mail from American School of Needlework with an errata sheet for the Daffodil Doily from Learn to Tat by Janette Baker. She followed their corrections without question and the directions for Round 4 are still wrong. So, she's going to tat another one using the corrections listed in her Feb. 1 post because if she had she would have another finished Daffodil Doily by now! It's still very lovely and done in size 20 Manuela it measures about 4" across. 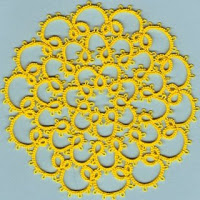 Joy has another finished hanky. The lace on this one is made with size 30 white cebelia thread, and the pattern is just simple rings and chains with 4 ds between each picot/join. 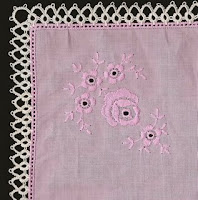 Wally has needed the therapy of tatting this week to help her deal with the pain in her hip. 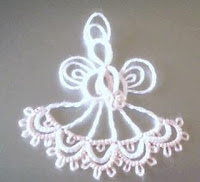 Hi, I would love to take the 25 motif challenge. I have posted my first motif for this year on my blog...please come and visit :)

LOL! Thanks for the post! I'd like to make a correction tho! I didn't WIN anything. It was an art exchange with a blogging friend in Japan. I tatted a snowflake in EXCHANGE for some whimsical illustrations of me tatting. It was like a friendship exchange inspired by each other's admiration for our art. The photocase was something else she made for me in the exchange. I'd like to invite you to check out the illustrations, Sharon! They are darling. It was really special. They are on the same post that you took the photos from. The exchange was for the illustrations ~ not the photocase, but she just threw that in as a bonus.