Vera tatted Mary Konior's Queen of Hearts to add to this ornament to commemorate her 42nd anniversary. 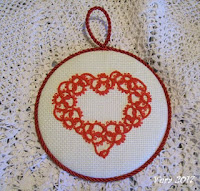 Batty Tatter has 12 Ice Drops ready for her Christmas market and one of these is already spoken for. 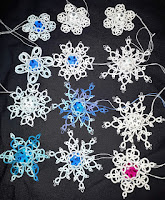 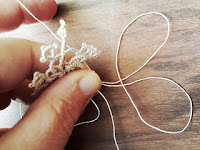 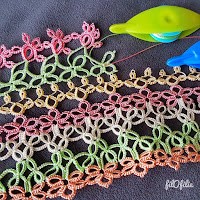 Melanie tried out Matilda, a pattern by Lee Hye-oon. 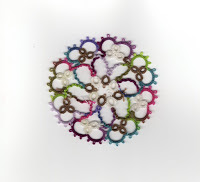 Sue has taken a page from Jane Eborall's book and tatted a Rachel doily. 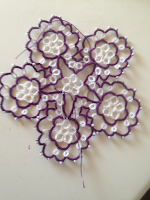 Claire spotted a tatted collar used twice on the costumes in the series Downton Abbey. 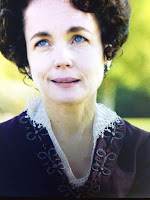 Diane has been busy cleaning up clutter and reorganizing in preparation for all of the Christmas activities so she only managed one Ice Drop. After decorating for Christmas she was able to tat 2 more Ice Drops. 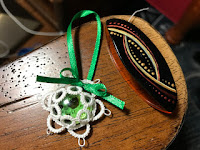 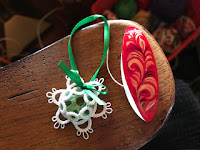 Margaret tatted Barbara Murdock's Snowflake Ice Drop using bungle beads instead of a round bead. She tatted the Cosmic Ice drop by Nicola Bowersox and not having the right colour of gem she used purple nail polish to cover the back of a clear gem. 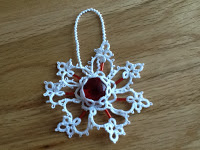 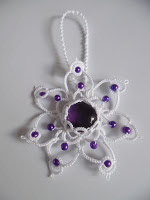 Marie's marvellous rendition of Robin's, Reflection Snowflake  demanded attention to tat. Her Christmas tree is decorated with quilling, tatting, and homemade ornaments. While her little tree is decked out with baubles from her two books Tattasaurusing, Baubles and Motifs. 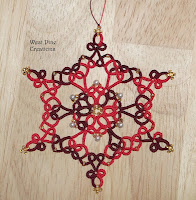 http://www.tipsaroundthehome.blogspot.in/
Muskaan tatted squares in pink. An elongated ring resulted in a diamond. Left over thread made a button motif. Playing around with squares can lead to lots of interesting variations. She test tatted Guoda’s lovely first snowflake pattern but had to change to notation to something she was more familiar with. For the outer motifs on her doily she used a repeat of the very 1st round where she used double picots. 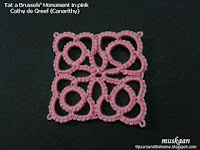 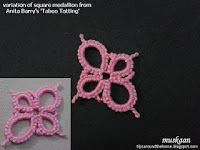 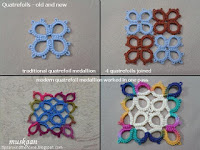 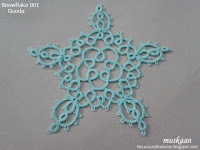 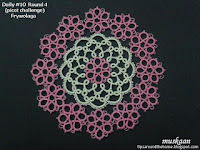 HisKid tatted Mary snowflake from 20 Twenty to Make Tatted Snowflakes by Jennifer Williams, worked in size 20 Lizbeth Blue Ice with tiny blue beads.
This next snowflake is named Auriel and it was the placement of beads that made this one hard. She tatted another Birthday Ice Drop in Lizbeth size 20 Snow White with gold beads and a frosted gem. Here's all of her recent projects. The tablecloth is growing. It's slow growth, but it's still growth. 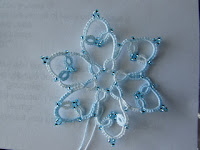 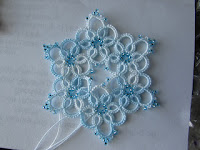 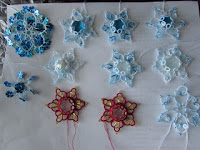 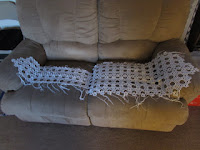 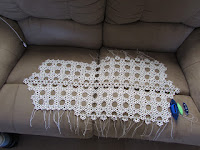