Vera bought some red thread last year and when she found it in her stash she decided to use it to make ornaments. She decided to stick with simple patterns and so far they are looking great. 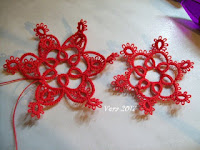 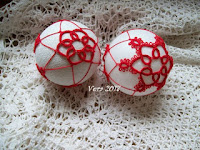 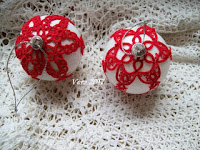 Sue shares with us the laces from the ladies at her local tat days. The bracelet was done by one of her students who learned to tat in March. Lastly are the pieces from their Christmas exchange. 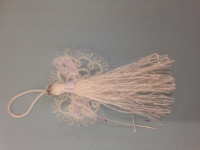 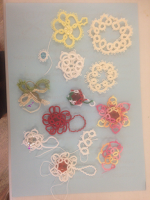 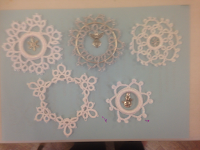 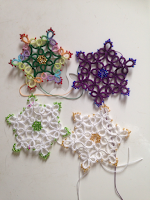 Diane used these lovely little pearlescent beads on this Ice Drop and her grandson chose the ribbon to go with it. She loves all shades of blue and even though the beads and ribbon don't exactly match, she thinks they go well together. With these she has another treeful ready for Christmas in the Village. She started this Minty Fudge pattern Thursday night and finished it Friday night. This Minty Fudge pattern was Saturday morning and finished it early Sunday morning. Cleaning for the holidays hasn't left much tatting time, but she did get one Ice Drop finished. 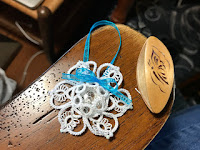 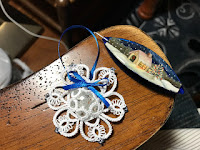 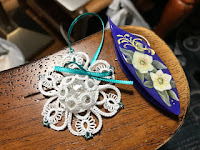 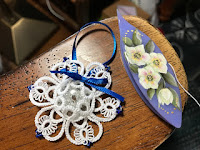 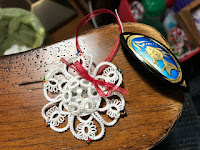 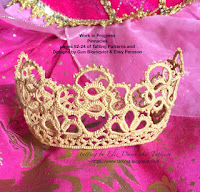 Fox has the third row of the centre done on this Stawasz design. When it's more of the same it gets a little boring. (Is it just my screen? The previous picture looks like a lovely soft silver grey, but all the other pictures look plain ordinary white?) 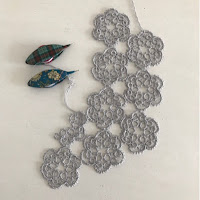 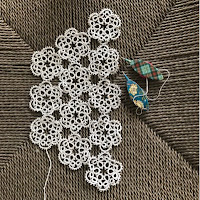 Margaret tatted this row of the doily with the long chains, but she doesn't like how it looks and she's hoping it will pull into shape with the subsequent rows. The next row is done in purple ans it's not her typical colour choice, but sometimes you have to stretch your wings and try the unexpected. 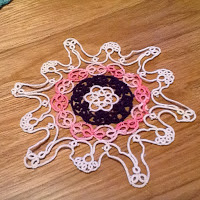 Marie tatted Robin's Large Snowflake in size 80 thread and it turned out 3" long. This is Robin's traditional snowflake with beads. This design was tatted around an old brooch, found at an estate sale. 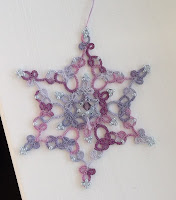 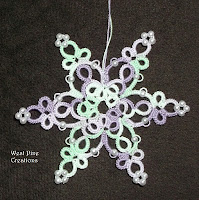 Muskaan has another new pattern for the medallion series with the PDF available from her blog. She used Anchor size 20 which is thicker than Lizbeth 20 and it measures approx 6.5 cms at the broadest points. The first trial in tinted blue with not all the chains of same length and some other minor tweaks. 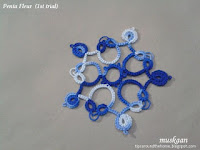 HisKid's friend needed a tatted lanyard to hang her cross on, so she tatted one for her with purple beads. She tried several variations and finally did this one in size 10 thread that worked perfectly with the size beads she had. 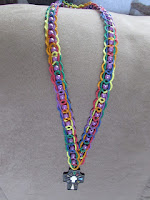 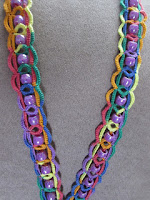 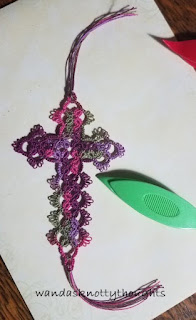