Usha has created a motif dubbed Enchanting Square using tiny dot rings. Pictures with explanations are on her blog. 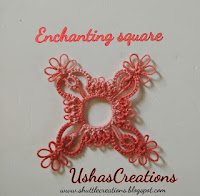 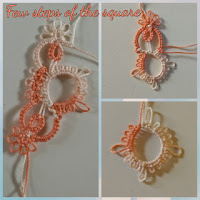 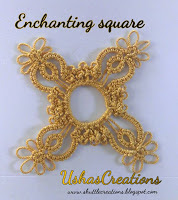 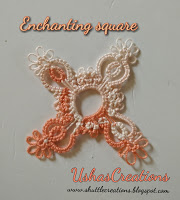 Mistene finished round 8 of Renulek's Spring 2017 doily using Yarnplayer's size 20 Sugar Maple HDT and she's loving the way it looks, but a slight lapse in concentration meant she needed to cut some out and she's concerned about running out of thread. She's thinking she might have to stop before the thread runs out, or use a complimentary colour on the remaining rounds, or see if anyone has more of this lovely hand dyed thread. 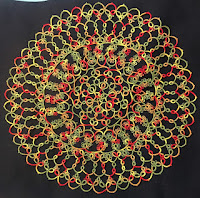 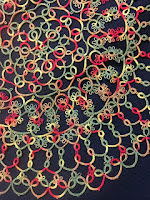 Elsa is still working on her scarf and her pillows, but she just couldn't resist one more project, a tatted bag made with bands of lace. She used some edgings from Tina Frauberger and then she wanted a central floral motif and found a suitable design by Nellie Ellison. Her sample is done in Lizbeth 40 cotton. After much thought, she decided to make the polyester tatting with Tenax 40 using lilac and straw for the central motif. She made a set of her Babo bracelet design in Tenax Polyester thread size 30 in iron colour with Toho 15/0 Iris Teal mat, Swarovski Erinite round and drops. 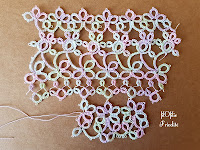 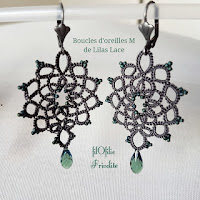 Diane's granddaughter Sophie chose the blue gem and pink ribbon for this Ice Drop. She trimmed Diane's Ice Drop tree, and then informed her she had to make more of them. 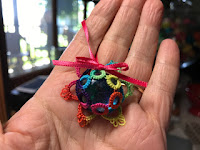 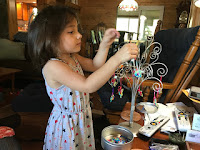 Margaret found what she thinks is a Japanese pattern for earrings on Pinterest and tatted them, but she doesn't like the floppy unattached rings which will require stiffening to be used. She did it again putting a larger picot on the centre ring and added two beads which she connected to the outer ring. 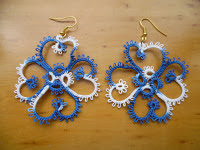 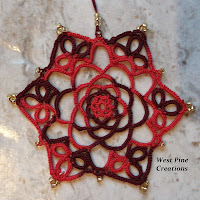 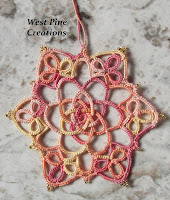 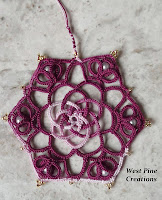 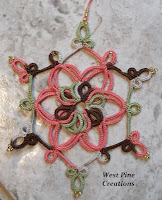 Muskaan has another iteration of the design Georgia sent her, one of those lovely to look at, but awful to work, vintage designs with lots of separately worked, cut and tie, bits. The first updated version had rows I to IV  tatted as one continuous unit, then tie and cut before row V was worked separately. A revised diagram was created to do it all in one go, but some people were confused so Muskaan did it again reversing the direction of the diagram to make things clearer. The new PDF is available from her site. 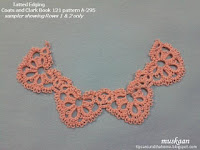 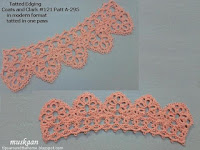 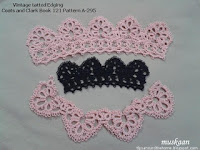 Sue had a request for the pattern for her Tatted Sequin Star, which she did here in size 40 thread, and she shares the pattern on her blog. She's working on a personal challenge and has used Woodland Medallion by Robin Perfetti in size 20 Lizbeth Christmas Delight for this sample, but she's doing another one so that she can show what she has planned. This size 80 thread and her idea didn't coordinate, so she ended up putting it on a blue laser disc. She doesn't think the back looks all that great. Tatted in size 80 Lizbeth Peacock Blues with tiny green beads and a flat peacock bead for the center, this was intended to be an earring, but after adding more in the back she opted for a pendant and the second one was turned into an Ice Drop. 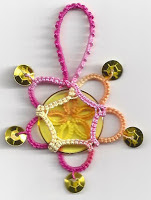 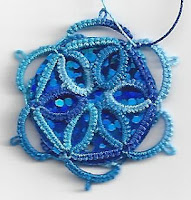 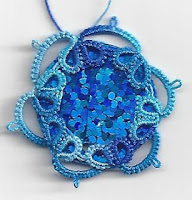 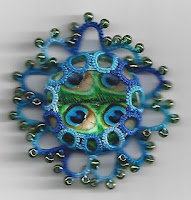 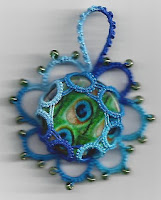 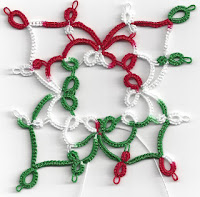 Wanda has been reading up on Lael Morgan who published books on a variety of subjects including tatting. 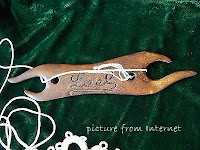