Usha got the idea of stringing dot picots on bare thread while working with single shuttle patterns and her Exotic Pollen design was born. She show how it's done and provides a PDF pattern for it on her blog. She's also looking for test tatters for another pattern called Fusion Elegance. 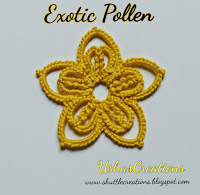 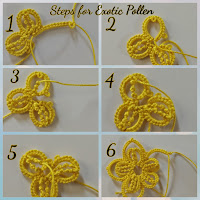 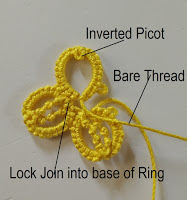 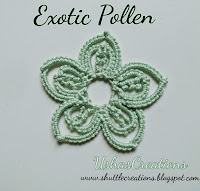 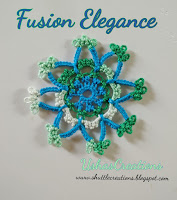 Mistene has run out of Marilee's size 20 Sugar Maple hand dyed thread and needs more to complete her doily. If anyone has any please get in touch with her. Failing that she's wondering if she could continue in either the orange or yellow. (I think I'd go with using both, one for rings and one for chains.)

Diane spent time on the porch tatting, keeping her husband company while he worked in the yard and the the results are 3 more Ice Drops. Cleaning and weaving took up a lot of her tatting time so she only managed one more Ice Drop. 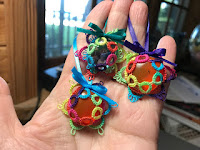 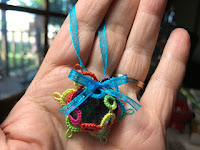 Fox has been doing a lot of playing with fiddly patterns which she doesn't usually enjoy, but judging by the quantity of them she seems to be having fun with these button motifs and Ice Drops. She branched out from buttons and gems and tatted a Jon Yusoff pattern. Th gorgeous button in this Ice Drop is Venetian glass that Ninetta sent her a few years ago and she was saving it for something special. A mind twisting pattern takes careful attention. 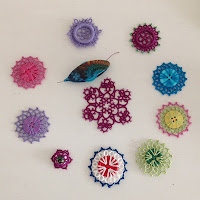 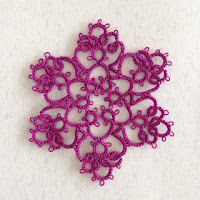 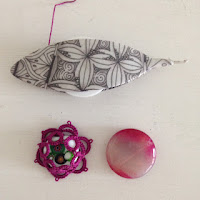 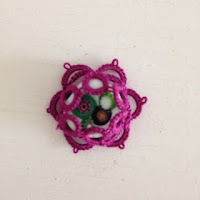 Margaret has plans to refresh a dress with this Jan Stawasz pattern where she is working the split rings and the first row of the pattern together so she can get the right size.

Martha is working on the yoke from Practical Tatting by Phyllis Sparks which is old fashioned and elaborate with approximately 86 individual motifs that can be tatted in any order and she began with the oblong motif. She Photoshopped the image to show it on a black background.

Muskaan tatted Jon Yusoff's Daisy Picot Star, but she was concentrating so hard on getting the daisy picots right that she joined a picot on a ring that should have been floating and decided to cut it off and try again. Things were further complicated by her obsession with front/side, back/side tatting. The dot picot trend continues providing interesting texture to flowers and leaves in this dot picot bouquet. She did a test tat of Usha's Exotic Pollen and found the inner round a bit fiddly. Instead of joining the pollen string to base of ring, she encapsulated it within the last half stitch of the ring, and closed ring. She ran out of thread on the pale yellow one, & had chosen a brighter yellow for the outer round, but this looks cute as is. The cluster of flowers needed some greens. She started with a string of dot picots, joining back at a distance, to create the veins of a leaf as you can see in the pictorial, but this one was disproportionately large for a small leaf and it worked better as a stem. 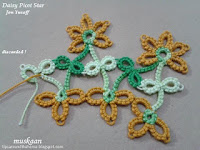 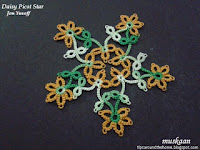 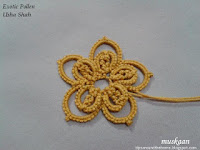 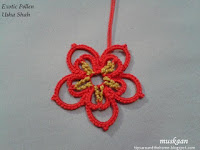 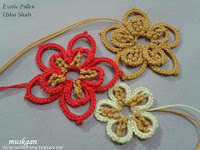 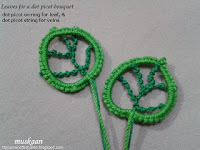 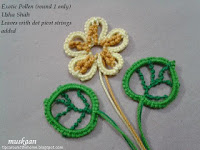 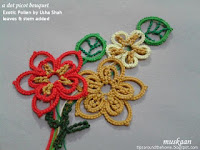 Sue tatted the earrings last week, but she needs to sew in the ends and add hooks to the orange ones. The Christmas Ice Drops were done over the past 3 days. 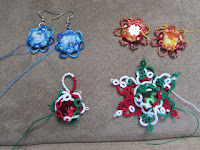 Wanda was tatting around buttons and this design didn't seem to work, until she realized it wanted to be a butterfly although the head wasn't quite right. She did it again in white and the joins to the button holes look better, but she thinks the head still needs work.