Sarah tatted both versions of Joelle Paulson's Le Flocon Frivole and to her they look like two different snowflakes. The first version is worked in two rounds, while the second one is worked in one round. This snowflake, called Julia, is the reason she wanted Jennifer Williams' book, Tatted Snowflakes because she loves the free-floating rings in the centre and the twisted texture of the node stitch chains that form the internal star. 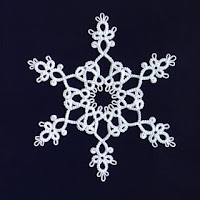 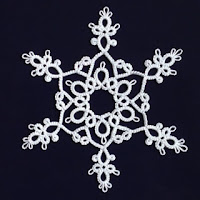 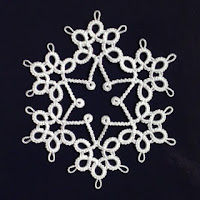 Sue tatted herself a lanyard using Patti Duff's pattern, an odd ball of Coats 20 she had in her stash and a large batch of multi coloured beads. And here it is with all of her tools attached. 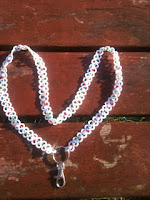 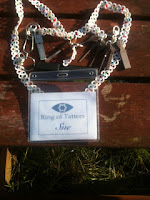 Claire used the flower pattern from TotusMel's Tatted lace bodice strap in  Lizbeth size 20 in colour Garnet Dark, # 674 and Black # 604, to make a poppy for Remembrance Day, which is coincidentally her 25th motif. 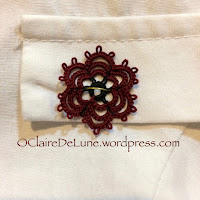 ( In Canada, it is traditional to wear a poppy  in November, up until the 11th day, in remembrance of the signing of the armistice which was signed on November11th at 11am in 1918, the eleventh hour of the eleventh day of the eleventh month. It is in Remembrance of the soldiers who died in the World Wars and later conflicts, Lest We Forget, how horrible war is and what an enormous loss of young lives it costs us. It is not a celebration of the Armed Forces, but a stark reminder to step back from conflict and find a peaceful solution.)

Diane has finished her poppy red Spinning wheel. She also tatted more Snowdrops, but since Frivole also has a snowflake with that name she has re-named them Ice Drops. She has restarted her Cubs Spinning Wheel using split rings but it's not working for her. Her Ice Drop tree is almost full. She finished off one more Ice Drop with pearls and then one with gold, and one in red and gold. She wasn't happy with her first Cubs Spinning Wheel as the centre seemed loose to her. She did the second one with the shoelace trick after almost every ring, but she thinks it looks much better. 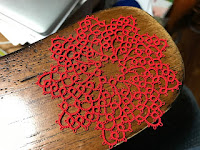 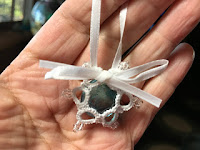 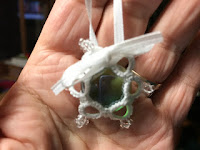 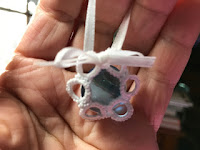 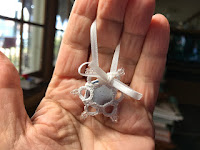 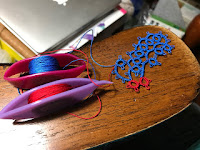 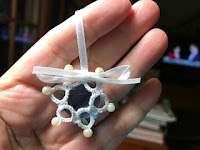 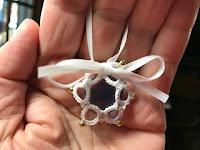 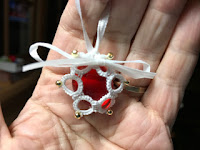 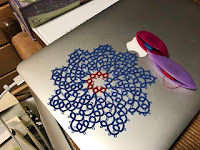 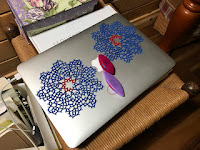 Eliz shares her progress on the 19th Day of December snowflake from 24 Snowflakes in Tatting by Lene Bjorn which she is working in DMC size 30 which the TWoT exercises have helped her see in a different way. 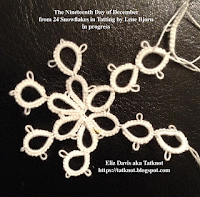 Fox is progressing on her doily, very, very slowly progressing, and Mr G is checking it out, or getting in the way, depending on how you look at it. 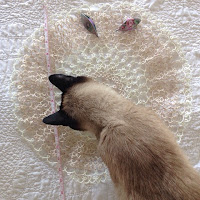 Lilas doesn't currently have anything to show, but she's asking you to vote at the craft awards. 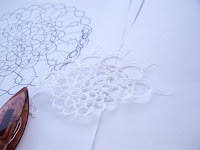 Marie shows the before and after of tatting around an old ivy button. Her favourite Tiny Teapot by Martha Ess makes a lovely bookmark. Before and after a single earring has tatting added to it to make a pendant. This is Beth's Z.'s "TatChat Shuttle" pattern, made into a bracelet. 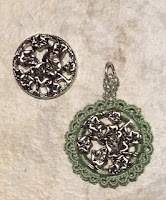 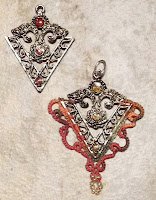 Muskaan has done a compilation of how to hide ends without knots in tatting, with special attention to single shuttle tatting, split ring tatting, and cluny tatting. 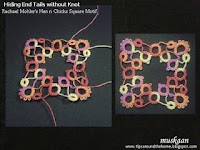 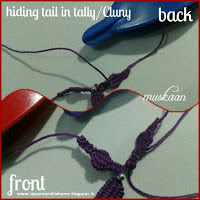 FYI!
Because of the unhappy Jian Ghomeshi incident, MrG does not like to use the name Gian anymore! MrG also responds to G or GeeGee. His name has even been changed in the Veterinary records! And at Vity Hall... :)