Batty Tatter has been working on hats again for the Christmas Farmers market. Jane Eborall's cute little robin has become a blue bird that she plans to put on a card. 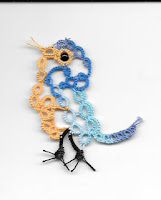 Elsa did some more work on combining needlelace with tatting. Lace Renaissance of Thérèse de Dillmont gave her an idea for a woven centre, and combined with cluny tatting it gave a wonderful new centre to a basic medallion. 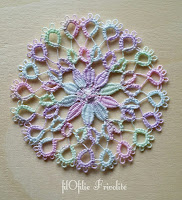 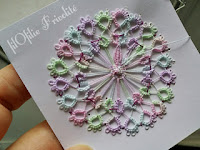 Diane took several classes at the Palmetto Tat Days and determined to take pictures just to prove it and chat with the various tables, which explains why she made joins in the wrong places and didn't get as far as some of the other students. Which just goes to prove you can tat, and you can talk, but tatting and talking together is challenging. The Interlaced Necklace kit was used to tech Nina Libin's class, and Nina as anyone knows who has seen her work, likes a little lace with her beads and makes the most astonishingly wonderful designs. Sandra worked in gold and black while Diane did hers in silver and blue. Diane finished this Spinning Wheel while at Palmetto Tat Days in size 80 Lizbeth #679, Lime Green. She immediately started another one in size 20 Lizbeth #710, Bright Blue Light, which seems huge after size 80. 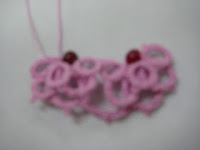 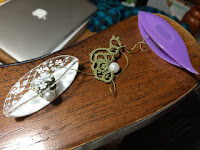 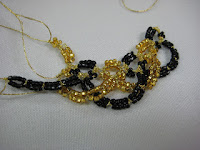 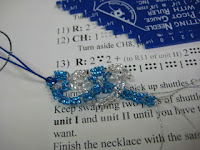 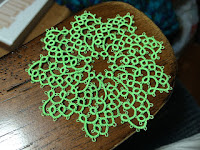 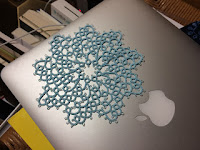 Fox is making progress on row 10 of her doily, but with a doily this large every row seems to take forever. 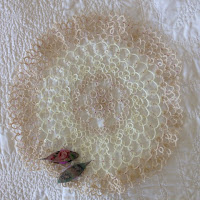 Lilas tweaked part of an insertion pattern from the Priscilla Tatting book to create a bracelet in Gutterman silk thread and she has graciously shared the pattern on her blog.

Marie added tatting to this Opal cat to make a lovely pendant. She has tatted this bookmark using a pattern taken from the internet years ago but she doesn't know who designed it. This design is called "Shoestring Cross," by Teri Dusenbury. 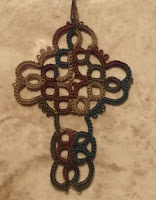 Martha's beloved husband passed away on September 5th, our thoughts and prayers will be with her.

Muskaan has lots of WIPs, one of which needs this tiny tatted grape bunch below, but pics revealed bare thread so it needs re-tatting. Latest bookmark started is an extension of a dear friend's motif and this is how far she has reached. 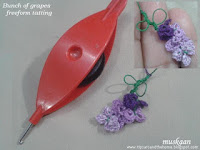 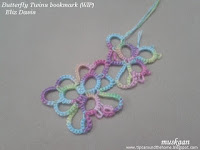