Jane has finished the last of the motifs from the Tatted Artistry of Teiko Fujito that are inspired by nature, which would be useful for decorating cards or food covers etc.. The next section of the book is edgings and this first one, number 78, isn't very interesting, although it could work to decorate the scalloped edge of a tablecloth or skirt. She likes 79 and 80 a lot more than 78.

Elsa was intrigued by tatting combined with needle lace and designed a tatted wheel with a needle lace centre. 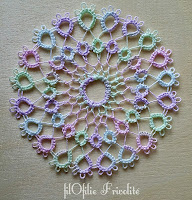 Melanie did really well at the fair winning  2nd place for the Double weave sample
which can be seen here front and back. 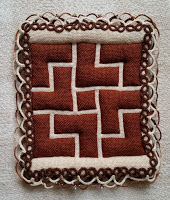 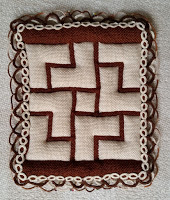 Diane wasn't going to lose tatting time while riding in the car on the way to Palmetto Tat Days, however, having to open a closed ring in size 80 thread while travelling in the car did slow her progress by over an hour!!! 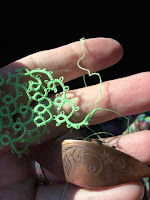 Eliz loves the pairing of these two variegated colours and it's unfortunate that it was tatted incorrectly and she's running out of thread. The second picture is tatted correctly with different thread. 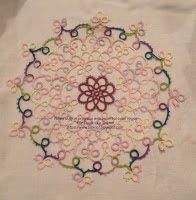 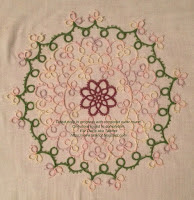 Fox is on to the tenth row and she's really liking this doily, so she may keep it and give the red and blue one to her friend who loves the colours. 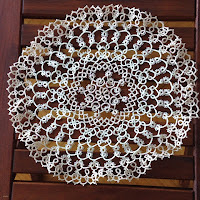 Laurette tatted Jon Yusoff's Overlapping Chains bookmark in colours to match the covers of her books.

Marie is still working with her pansy disks and this pendant is called Dogwood. The Iona Cross by Jane was fun to tat. This unnamed cross is from Tatted Treasures, by Jan Stawasz. 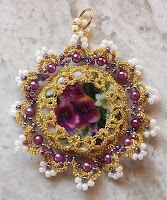 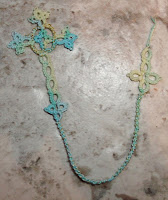 Muskaan mismatched thread sizes and ended up with 4 snowflakes instead of 2. Read all about her trials and steps to fix the resultant problems. 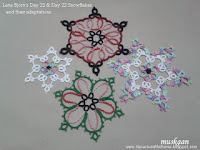 Wanda is concerned that tatting may be dropped from the fair entries so she enters one in the tatting category (her doily with the Harper edging), then looks for other areas where she can enter tatting just so that people know tatting is not a lost art. The 3D angel was entered in the Christmas decoration category. In the non-Christmas category she entered a tatted Halloween picture. Clever! 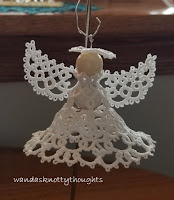 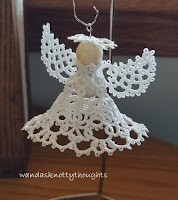