Jane likes the triangular part of this edging but thinks that over all, it's too floppy. Floppy edgings do bend nicely going around curves.

Elsa decided a photo contest on Facebook was a good excuse to tat this motif by Korean designer named Mi-Kyong Ha. 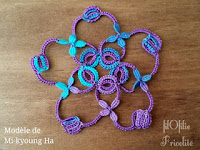 Melanie was working through the online tatting class project using 4 colours and although she's not happy with these colour blends she's planning on incorporating this edging into a bell design.

Grace made this bracelet for her mother for Mother's Day with size 70 cotton vintage thread using a design by Shannhob she purchased on Etsy. The pansy from a Priscilla book, is made with size 40 Lizbeth cotton in the centre and middle (purple colours) with glossy polyester cream on the edge, which was turned into a pin. The design for this bracelet is one she created with size 20 Lizbeth in rootbeer and ecru and glass beads painted gold. Another birthday gift for a 1st grade niece uses a pattern that is more simple and so tiny and cute. Her grandma made the white motif 20 plus years ago and Fox sent her the burgundy motif recently. Fox told her it was from the Blomqvist/Persson book, and she made her own in a multi size 40 Lizbeth. Gold Dust size 40 from Yarnplayer on Etsy, was used for the giraffe from Tatted Animals by Inga Madsen. 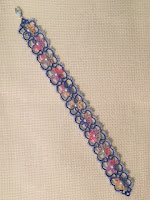 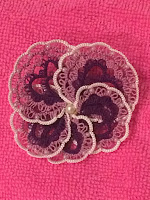 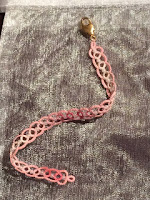 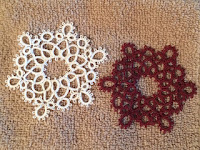 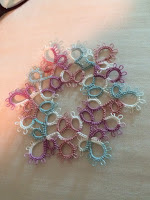 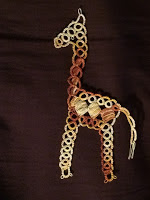 Diane was working as a sub and since she didn't need to plan anything, used the teacher's plan time to tat on her Spinning Wheel. The craft fair was a bust, but she got another Spinning Wheel started. This string of flowers helped to empty a shuttle and will get used on a crazy quilt she has in mind. 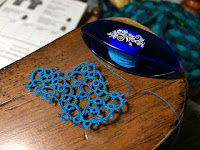 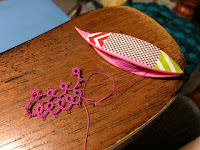 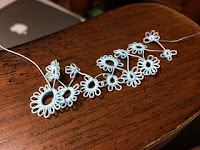 Eliz got the pattern for this doily from an old defunct Geocities web site, and not having any other reference for it she has been referring to it as the Geocities doily. Some gymnastics were required to keep the light coloured cloverleafs facing outward so that they landed between the motif on the outer round, but she was successful and the end result is a beautiful doily. 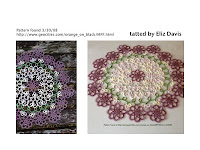 Fox after an interminable time on row 10, is now onto the next row and of course working with beads is just making everything that much slower. 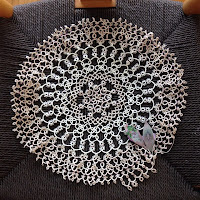 Margaret was attempting to make the woven bookmark which Carollyn and Wendy did, but she forgot her picot gauge and what she has instead is a total mess. I personally loathe having to use a gauge, but sometimes it really is necessary. 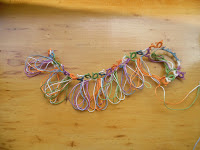 Marie has another clip earring that needed an outfit to change it into a pendant. She added tatted fobs to some folding scissors to bling them up. She is calling this design "Dew Drop Brooch". This brooch was tatted with DMC embroidery floss. 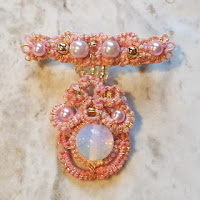 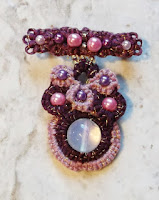 Martha's Toy for Tatting book is out.

Muskaan has introduced a new project called This Way or Tat (TWoT) with a design called Dotted Snowflakes. Check it out. 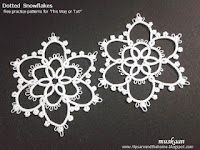 Phyllis tested some tatting projects for Tat Days; the navy/gold and dark pink bracelet strips are from Martha Ess' Starry Bracelet class. The bear was tatted in size 10 (pattern called for size 10, but 10 was all she had on vacation to tat the project).  It is from Martha Ess' Technique Teddy Bear class.  The red/white star is Martha Ess' Broomstick Picot Star. The navy angel is a design by Kathy Hodge called Guardian Angel. 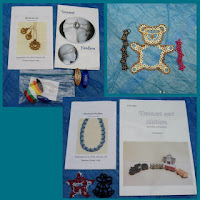 Wanda shows her projects from Palmetto's Tat Days, including Jane Eborall's Quarter Moon Class and Mimi Dillman’s Cluny Improvement Doily. After she got home she started another cluny doily, in two colours and both are now finished. 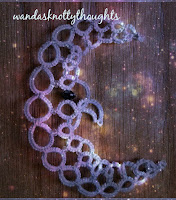 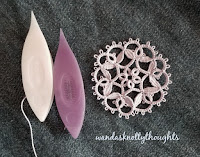 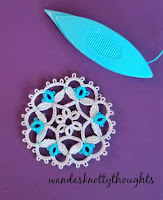