Eliz has decided to join us and has begun using white DMC Cecelia size 30 to tat December 3, 4, and 5 of Lene Bjorn's 24 Snowflakes in Tatting, which is where everyone else is in the Craftree challenge, but she'll go back and tat the others later to catch up. She has been tatting ice cream cones and shares how when a mistake is made, rather than cutting it out and starting again, you can often just keep tatting and just add in the same mistake again to balance it out. The pink thread is a Manuela size 20 and the cone is Altin Basak size 50. December 1 of Lene Bjorn's 24 Snowflakes in Tatting had a slight imperfection, in that she added an extra picot to one of the large rings, and a slightly greater imperfection of a totally omitted small ring, so she's not counting it as one of her 25. (I don't get that. It's a motif. It was tatted. So why doesn't it count?) 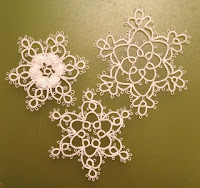 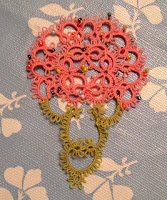 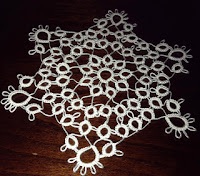 Nikki tatted these hearts from a free project sheet advertising Lizbeth thread, the left one is made with Bernat handicrafter thread and the green one is made from J&P Coats vintage thread. The bracelet is a pattern by totusmel. Tammy Rodgers heart pattern was done in Red Heart size 5 for the red thread and more of the purple and green Bernat handicrater thread. She's still waiting for her thread to come and in the interim she tatted a lot of shamrocks using patterns found on Le Blog Frivole. 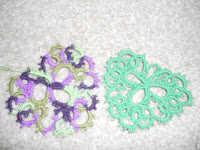 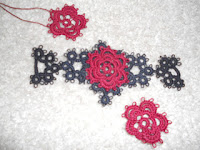 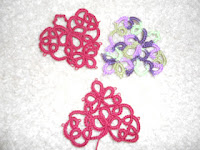 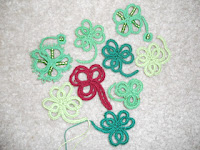 Sarah tatted the "Two Tone Coaster" from Workbasket Magazine's book "Tatting Patterns: The Classic Collection", working it all in white. 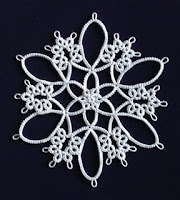 Melanie's tatting group is working on celtic tatting and this is Susan's first bit made with a repurposed tinker toy as a shuttle.

Sue tatted this earring from one of Marilee's books and added a leaf from her stash. 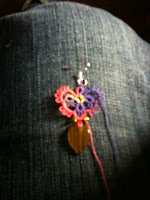 Diane turned the corner on her Concentric Rectangles doily. This row is almost done. Her latest Spinning Wheel glass mat in Lizbeth Twirlz, Mermaid Lagoon #404, whcih she thinks is her favourite Twirlz colour. Just as she thought she was nearing the finish line, she found a missing section of chain on the previous row. Ta Da! The Concentric Rectangles Doily is fixed and finished. She used size 20 Lizbeth, Victorian Red #670, for this Spinning Wheel Glass Mat and so far she's on track for tatting one a week. 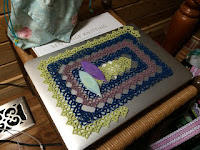 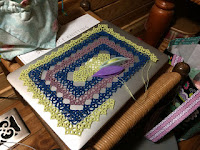 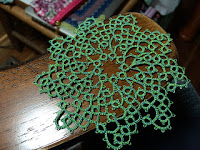 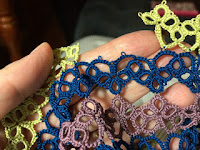 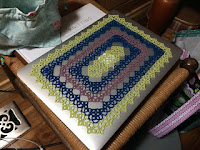 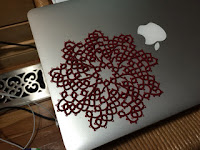 Fox is anxious for her thread to arrive, but she did receive Lea's Volcano HDT in size 70 and she's been using it to tat Teiko Fujito's doily. She left out a ring in the middle, but it was a surprisingly easy fix and the doily already has a new home. 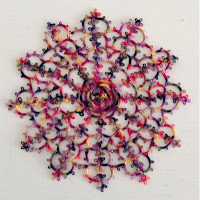 Jenn found the time was flying by and she's decided that she wants to be finished her challenge by April 12th, so she's tatting small motifs. The first motif is Jon Yusoff's dragonfly which was easy and quick to tat up, perfect to use up the leftover thread on your shuttle. The downward picot flower can be found on Ring of Tatters website. Here they are together making a pretty picture. 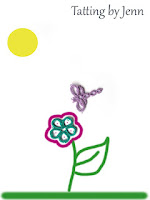 Laurette used the Springtime Doily from The Tatter's Treasure Chest edited by Mary Carolyn Waldrep as another one of her paint colour chip projects. (What a nifty way to colour coordinate your tatting with your room.) Motif #18 from DMC's Tatting for Today is tatted in Lizabeth 108 Sherbert Delight and 644 Boysenberry Dk. 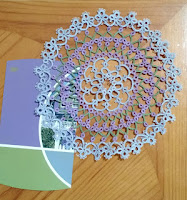 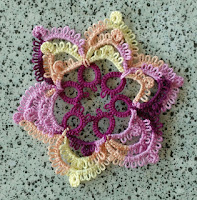 Lilas used the Chain only edging from antique tatting book in Finnish from Georgia Seitz' web site as a foundation, then added a layer of bobbin lace, followed by some layered flowers with Swarovski crystals to make an awesome bracelet.

Margaret is tatting the Land Of Laces Doily and the next round is done in Cranberry bush. She started the following row in light leaf green chains and Cranberry rings which, if it looks OK, she'll do the next row the same. She tatted Day two from Lene Bjorn's snowflake book using white and Niagara Falls no 20 Lizbeth thread. Day three snowflake is one of her favourites done in white no 20 Lizbeth thread. 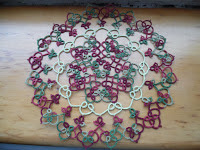 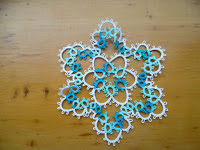 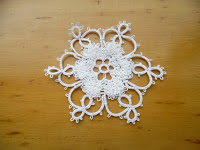 Marie only has 2 more rounds to go on her doily. She made this "Hearts" bookmark, by Dee Powell, for her niece on Valentine's day. Another round is done on her doily. 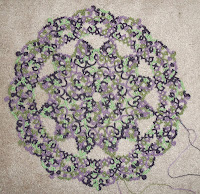 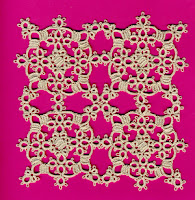 Muskaan has been playing around with Josephine Knots, bullion stitches (roll tatting) and dots (very small rings) which she used to create a 3D hibiscus flower and highlights in other creations she has made. She has added a PDF file to her blog to demonstrate various types of chains and show their effect. 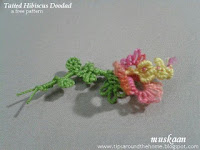 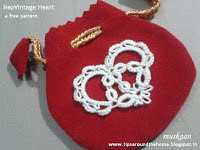 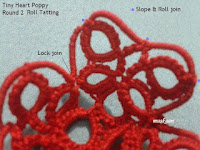 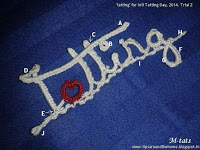 HisKid tatted blacks stars with gold bead accents in size 40 Lizbeth Black. She had another idea she wanted to try out on the bugle bead bracelet and it gave a nice ruffly effect, done here in size 40 Lizbeth Niagara Falls with blue bugle beads. This is the progression of the pattern. First the simple Rainbow Splash version, then the more elegant Black version followed by the Niagara Falls version of ruffled lace.

Wanda has been working on little things to give away on International Tatting Day, April 1st, like these button motifs that can be worn with a pin attached to the back.