Eliz is working on Gale Marshall's Queen Mom Memorial Crown but she's doing quite a bit of bead substitution, so she decided to tat the crown in part using DMC Cebelia size 30. 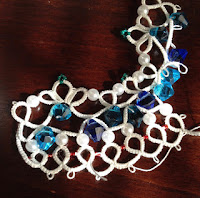 Diane has started another Concentric Rectangles doily this one is size 20 Lizbeth, Victorian Red #670. She originally planned to use black, but when she saw the Lizbeth Charcoal #606, she knew she had to use it for the second round. 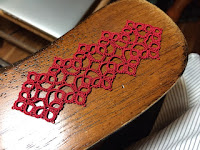 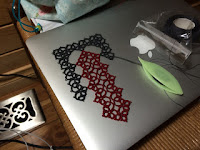 Fox received some lovely Quilter Silk from Suneeti in a deep carmine red and had to give it a try tatting this motif from Presson & Blomqvist. 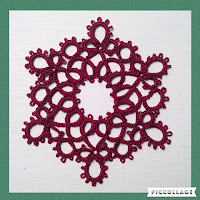 Marie says crosses are one of her favourite things to tat and this one is Medieval Cross by Angeline Crichlow.  She finally had time to block out this doily, which is 15.5" in diameter, using size 5 thread. 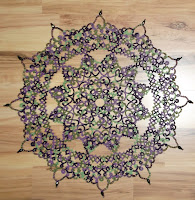 Martha's current project, is another pattern from "Occhi - Tatting -  Frivolite Mustersammlung" by Susanne Rolf that she is tatting in a discontinued Flora thread, size 50.

Sue has started another project and she wishes the iridescent colours of the beads showed better.  She's still trying to get a good picture of the unfinished bracelet, but it isn't cooperating.  Ninetta's Superduo Bracelet tatted in size 40 Lizbeth Boysenberry Dk. with dark metallic twin beads and tiny dark purple beads was so pretty several friends want one. 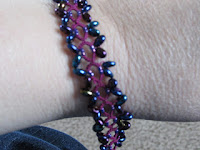