Marthanne is joining us and she begins her challenge with several eggs from Tatted Easter Eggs by Kirsten Wind Hansen.

Eliz has just one more section to go on her crown. She managed to get a few more inches done on round 1 of the Benporath Mystery Cake Doyley. She made some little sock dolls for a one year old and decorated them with tatting. The edging used around the neck needed to come in a very tight circle and she modified the row from the Norma Benporath doily for it. The thread on the blue-eyed doll is Lizbeth Juicy Watermelon in size 20. The thread on the brown-eyed doll is an HDT by Jess Foster aka Tat-ilicious 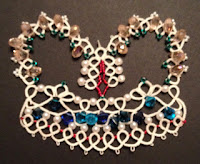 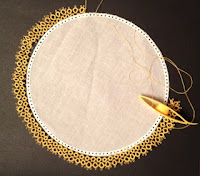 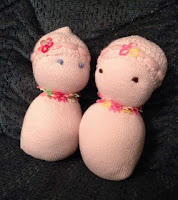 Nikki has persevered in learning how to shuttle tat, but admits that it's a steep learning curve and she's looking for a suitable motif to tat. (Plain old ring and chain edging is the best practise because by the time you do 44 inches, enough to edge a hanky, you have consistent tension and consistent picots.)

Sarah tatted Jon Yusoff's Pirouette snowflake in white and vintage Coats&Clark variegated thread, removing some picots from the large open spaces in each tip to help emphasize the shape of the white chain. 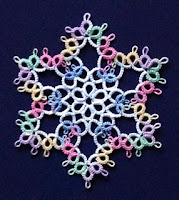 Elsa added some tatted earrings and a necklace to her acrylic picture inspired by a vintage design in Tatting and netting 1895. The closeup of the design shows the detail, done in size 80 thread. She likes the half wheel design and used something similar when she created her first female character a few years ago. 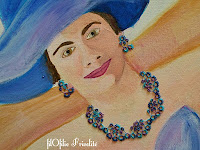 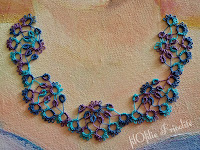 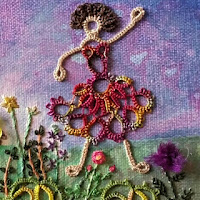 Lelia has been tatting designs from Forty Original Designs in Tatting by Nellie Hall Youngburg which the online class is working through updating the old patterns and this is the Acorn Medallion #24. She used LizBeth size 20, Colour 164. 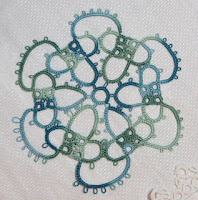 Cindy just happened to find two tea towels on clearance with initials appropriate for each of her girls and she tatted edgings to match them as little Easter gifts. 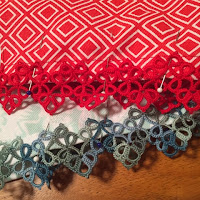 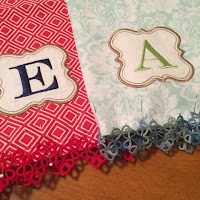 Diane found a rainy day conducive to tatting and she likes the feel of the Lizbeth Gold #611 she's using on her latest Rectangle doily. The current Spinning Wheel glass mat is taking a back seat to visiting, shopping, and soothing babies. The glass mat in size 20 Lizbeth Leaf Green Lt and Wedgewood Dk is even prettier in person. It turned out so well, she's doing it again in reversed colours. 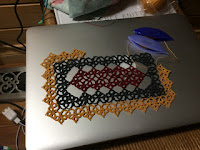 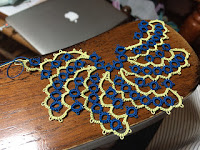 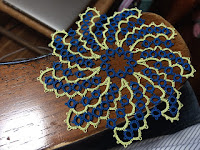 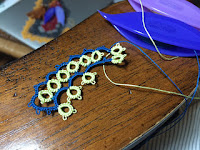 Margaret tatted these bunnies in Lizbeth thread no 20 in white and the bunny is a Ruth Perry pattern. 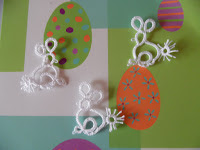 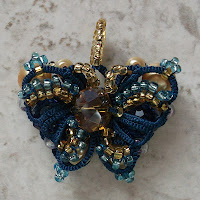 Muskaan liked the flower from Motif #26 from “Forty Original Designs in Tatting” by Nellie Hall Youngburg, that was rewritten and tatted by the online class. It looked simple and easy, but was a little more complicated in execution, so she has posted a step by step pictorial version on her blog. For the Year Long Snowflake Tat-Along on Craftree, she's pushing her colour boundaries using Anchor variegated embroidery cotton 1325, 2 strands and Anchor Mercer Crochet Cotton size 40 pink 052 on the Day Four Snowflake. On the Day Five Snowflake she used Anchor Mercer Cotton size 40 Aqua Blue #4054-0185. 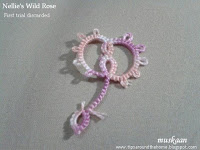 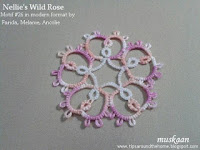 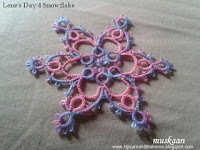 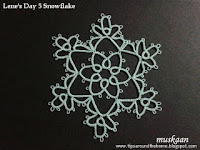 Sue has the next round of the Arches doily done and is already started on the final row. Finished except for hiding ends and blocking, it's tatted in size 40 Lizbeth Coral Splash, and Salmon Med. She has plans for this piece, but she's waiting to see if her idea works. Corina's Beaded Flower, and Sue's beaded star adaptation are done in size 40 Lizbeth Rainbow Taffy. 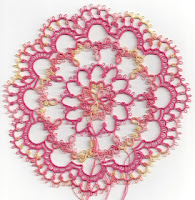 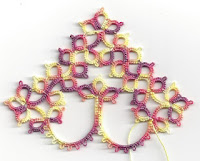 Beautiful things. I want to start a now challenge this year. maryshandmade.blogspot.com.
Thank you!