Pop Maria has decided to join challenge and she has been creating delightful painted Easter eggs wrapped in tatting. These are done in blue and white with blue tatting and she has others on her page, so go check them out. 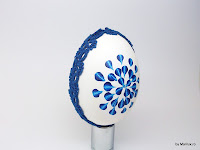 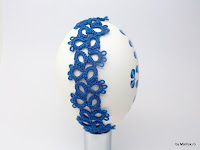 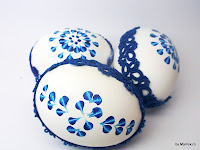 Eliz used Gale Marshall's pattern for the Queen Mom Memorial Crown and substituted lots of different beads and made the changes necessary to make them work. She wasn't satisfied with the placement of the brown eyed sock doll that she trimmed in tatting, so she moved them and she likes the end result. 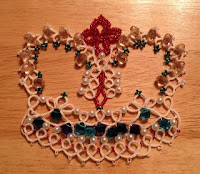 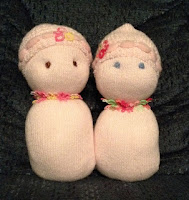 Batty Tatter made the Flowerpiece doily by Mary Konior in size 20 ecru thread for a friend. 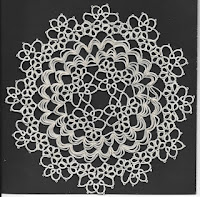 Melanie likes this square motif from a Workbasket magazine that she had to try and she likes the negative space with the long picots from the centre ring, which she has a list of possibilities to dress up. 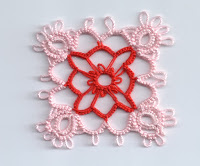 Diane loves the look of the gold thread on her latest Rectangle doily. She's going back to the grey for the next round. A little bit more work has been done on the Spinning Wheel Glass Mat. 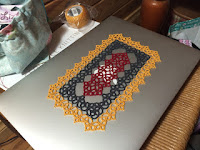 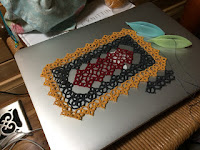 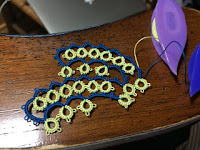 Fox has underestimated the amount of thread required for a hanky, but she won't be ordering more for this project because the good news is that the thread for her doily finally arrived. 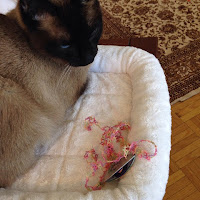 Marie tatted another butterfly and she's finding this pattern addicting. This butterfly was tatted with three strands of Coats and Clark, variegated thread and the challenge was trying to get the strands to line up. 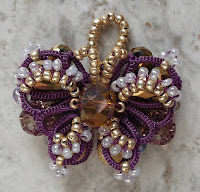 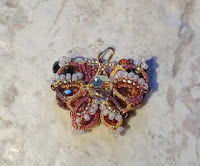 Phyllis made the Thirteenth Day of December from 24 Snowflakes in Tatting by Leone Bjorn in Lizbeth Blue Ice. She's using scraps of thread for butterflies to be donated to the Palmetto Tatters Guild for give aways.

HisKid was playing around with a drawing program and finally has a tatted version, done in size 40 Lizbeth Salmon Med that resembles her drawing. She also did some Salmon stars. This is Anika's Golden Star Earring Pattern, tatted in size 40 Lizbeth Niagara Falls with blue bugle beads and little blue glass beads. 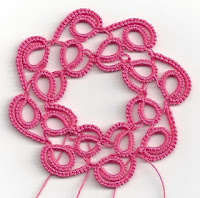 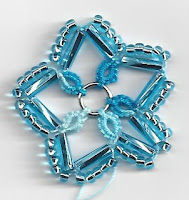 Wanda picked up some pastel chalkboard eggs and decorated them for Easter adding tatted flowers and pencil decorations. She only got 3 done so she'll save the rest for next year.