Note: An unrelated notice, I have been posting lessons on designing on the Design-Tat blog. This is a compilation of the lessons I have taught online which you may be interested in.

ClaireB has her second motif done and this one is her own design of a heart with beads made using Sunlight Polyester thread in size 60.

Batty Tatter made Jan Stawasz's Christmas tree using #10 gold thread with a strand of gold metallic incorporated in it and she's wondering if she should leave it as is or glue on some coloured beads. The angel on the lower right is made with Lizbeth Blue Ice and Arctic waters threads with the rings made with one and the chains the other. The snowflake in the middle is one from Jan Stawsz's book. 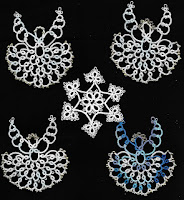 Elsa has provided some links to instructional information from various tatters on her blog. She has provided a modern visual diagram for the Tatted Diamond from Isabella Beeton's, Book of Needlework, 1870, available online at Project Gutenberg. One of her early designs was an earring based around a covered metal ring where she created a base row just like you would create a split chain which she has shown as a tutorial on her blog. Another tutorial she has created shows how to make a split chain. 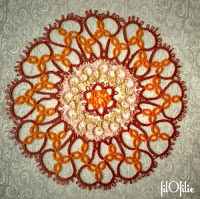 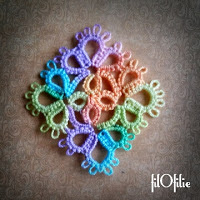 Lelia just received some new gauges and had to give them a try.

Cindy made her first attempt at Frivole's Snowdrop snowflake. This one she planned to save for Christmas has already flown out the door as a gift to a retiring coworker. 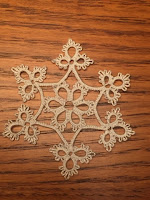 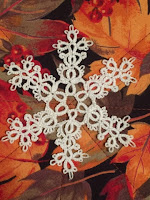 Claire used 4 shuttles and 2 different colours of thread to create these interwoven rings. 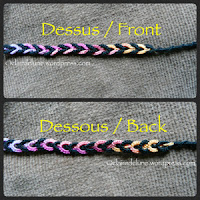 Diane hasn't had much tatting time but she finally has her doily back on track. 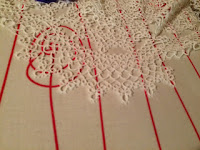 Fox is using #80 Lizbeth to tat Mary Konior's Hedgehog edging. Mary Konior's Hoop-la, tatted with Lea's #50 thread, is coming along nicely and she thinks she'll have enough thread to finish it. She's keeping her finger's crossed that there is enough. Whew! There was enough. Now that it's done she can turn her eyes to re-doing the Starlight Doily. Perfect design, perfect measurements, and perfect thread make for a perfect hanky. 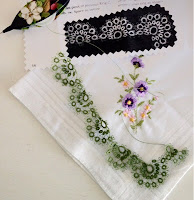 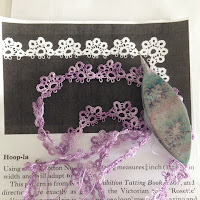 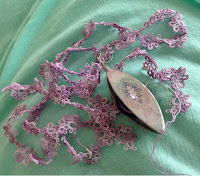 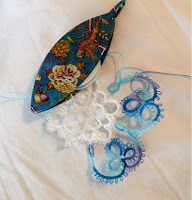 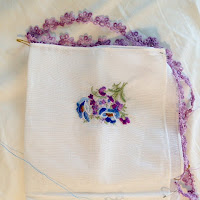 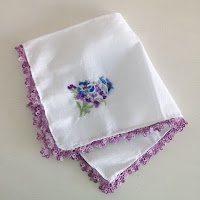 Marie continues tatting dragons and this little one is done in Holly thread. These two are made in Midnight thread. These Dusk coloured dragons are tatted in sewing thread. Two more are done in Citrus. A pair in Dawn colours. 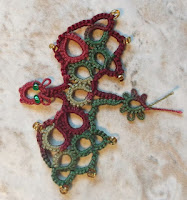 Martha shares her design process for creating this delightful angel. It began with a rough sketch and an idea for a floral robe similar to an earlier design she had worked on. 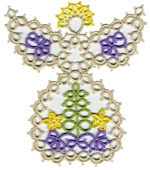 Muskaan found Eleonore’s Angels a challenge and she shows you how she worked through the design. The troubles she had and the things she learned working through it. This kitty face was designed & shared by L Shelby as a Halloween piece. She chose to work it in colours that gave her a blue eyed tortoiseshell cat. 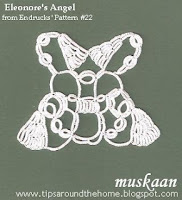 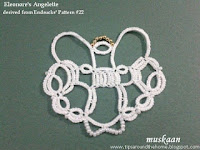 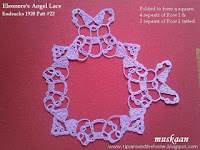 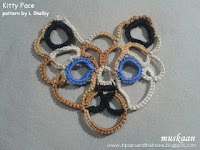 Wanda created this paperclip button bookmark with many tails for her aunt to use in church.