Batty Tatter is back with us and she has been working on snowflakes and angels. She added a third row to Leen's Angels, designed by Eileen Stafford and realized that when she used too large beads for the halo it made the angel's head rather large. On the second one she put beads on the bottom of the skirt. The snowflakes are from Frivole and she loves the Josephine Knots. Renulek's snowflake design makes a large snowflake. 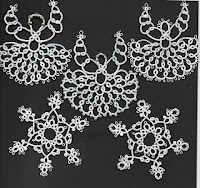 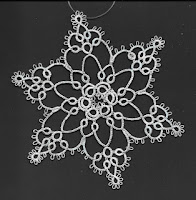 Melanie  has created this sample of pick up on plain cloth to which she'll add this simple blue edging.

Sue has been taking a short vacation and leisurely working on her doily. She must have been too relaxed, because she just noticed a mistake. 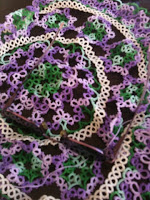 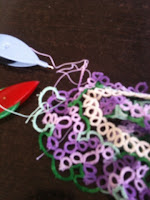 Cindy is in snowflake mode and has tatted 5 from Jon Yusoff's book Tatted Snowflakes. 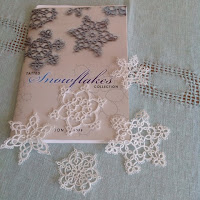 Claire celebrated the fall of this year with a new pair of earrings using a pattern by Joëlle Paulson called Feuille Frivole made in Lizbeth size 20, Autumn Spice # 136.

Diane has row 15 done on her Jan Stawasz Masterpiece doily and the next row looks like a simple one. She spent some time working on her Heart Doily from Land of Laces. She has started test tatting a new design. She was working on her Heart Doily at school and has some students interested in tatting. Round 16 of her Jan Stawasz Masterpiece is off to a good start. She has plans to share her shuttle collection along with the snowflakes she's tatting like this one she test tatted for Frivole. She finished round three of the Heart Doily from Land of Laces. 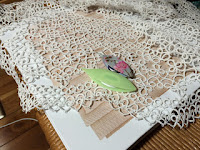 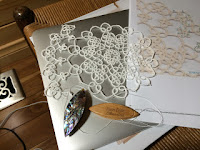 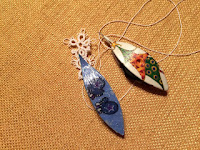 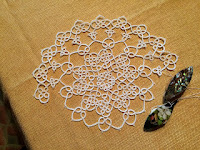 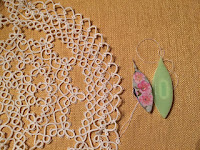 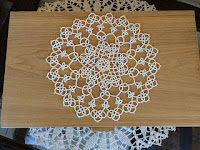 Fox is on to the last row of her doily and excited to be approaching the finish. Here is this Jan Stawasz pattern completed in size 80 Lizbeth thread and it measures 12 inches across. 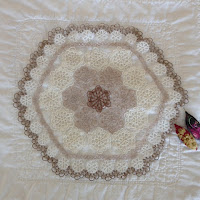 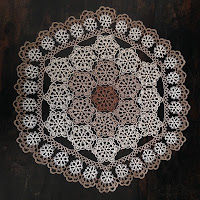 Lilas has done a tutorial on the balanced double stitch which gives a more stable chain. 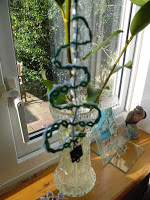 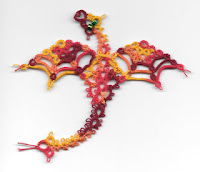 Muskaan shows how she tatted earrings with beads and earring hook attached at the same point. 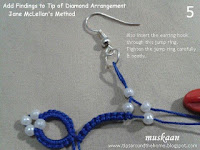 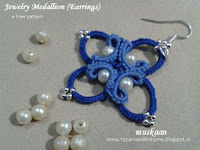 Sue did a test tat of Frivole's 2015 snowflake. 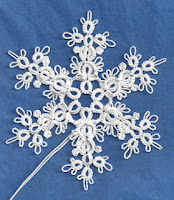 Wanda has been teaching some ladies to tat and they've decided to try to get together once a month.