Elsa has decided to join the challenge with her second snowflake from the book by Bjørn Lene, 24 Snowflakes in Tatting, using Tenax polyester thread No. 30 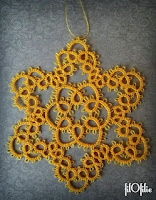 Dorota tatted small filigree earrings in black thread with black beads in 2 versions. The same design was made again in white, perfect for a wedding. 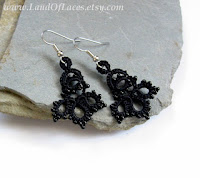 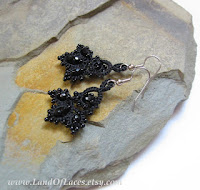 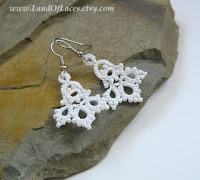 Mary Lena created a lovely necklace using a simple ring and chain repeat in white with seed beads and glass beads in the centre. The second version done in dark grey thread with red beads makes a very dramatic statement. 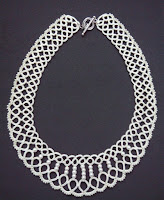 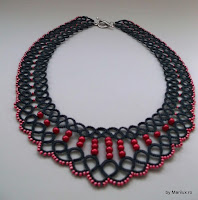 Lelia emptied more shuttles making butterflies to send off to the Tatting Corner. 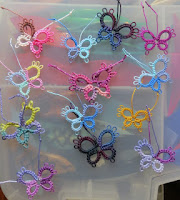 Linda made this in a Kathy Shawkl class of paintings, dyes and inks and incorporated a delicate tatted edging on the parasol. 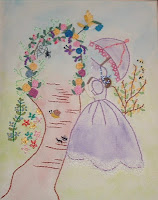 Claire took a break from Renulek's Wiosna 2014, but now she has the second row completed. 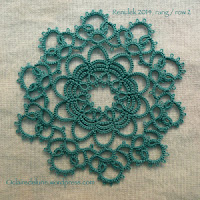 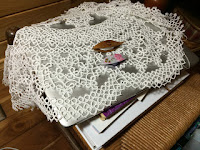 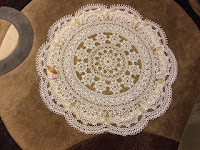 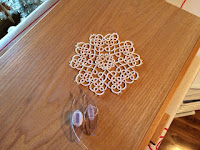 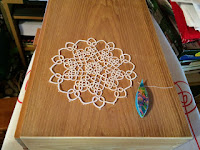 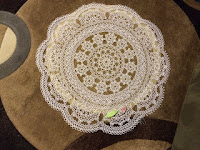 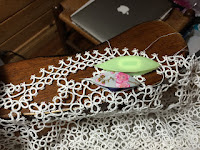 Fox has the round of little motifs finished and the next started. Dyslexia strikes again and the Heart Doily from Land of Laces has her stumped. She started this Karey Solomon design and for some reason it fizzled, so she ended up adding some beads and attaching it to a t-shirt. This time she tried it again with better success. Meanwhile the Jan Stawasz doily has only 2 more rounds to go. She has the Heart Doily figured out and is starting it in #89 Lizbeth. The Stawasz doily is at the penultimate row. 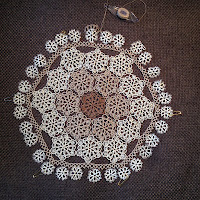 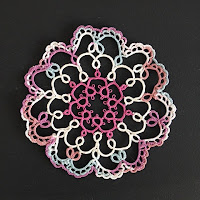 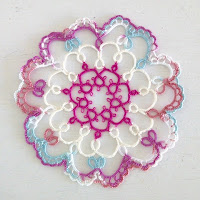 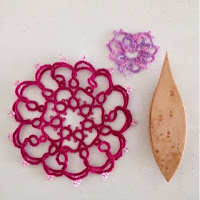 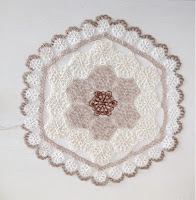 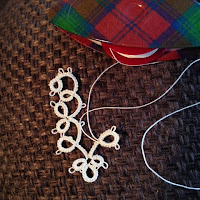 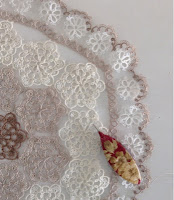 Lilas is still working on her creation which isn't a doily and isn't a placemat. The variation of the Therese de Dillmont pattern was redone in Tenax thread with hematite beads added to make this bracelet. 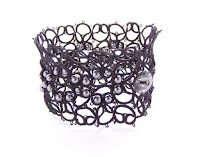 Marie tweaked the design for this Garden Collection pendant. This chain forms a negative space heart when weight is added to the bottom. An old earring was used as a base for this pendant. She traded this earring and pendant set for some size 12 pearl cotton at a quilt show. 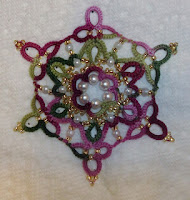 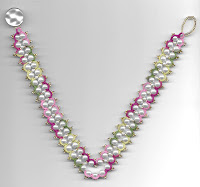 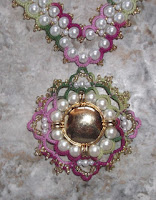 Muskaan chose to make bicolour motifs for the next round of the doily using cream and yellow for the snowflakes, yellow and brown for the smaller motifs and brown for the cloverleaves. She had been hoping to cut down of the ends to hide by making the snowflakes in one colour, but the bicolour arrangement what much more attractive. So she made a lot of snowflake centres then added the outer round that joins onto the main doily. Individual cloverleaves were joined to the main doily and the small motifs join to the main doily and snowflakes. She has included instructions to the tips and tricks she used on the doily on her blog. 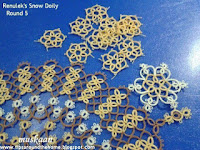 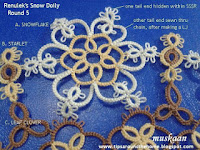 Sue has been experimenting with interlocking rings to make a lanyand for her husband, but she hasn't come up with the perfect arrangement just yet. 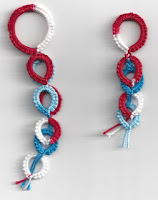 Wanda created this cross for her sister-in-law who recently lost her son. This traditional cross pattern she made for her new pastor. Both were made in Lizbeth size 20 thread, which she thinks is #652 Royal Blue. Wanda snapped up Fox's books on Armenian lace and received them along with a tatted motif and one in Armenian lace. Since someone asked how big her tatted bag was, her it is shown with a ball of Omega thread and a shuttle for perspective. 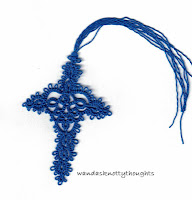 I'm having trouble figuring out how to put my blogs back on this site. I am battytatter.blogspot.

The original blog address given for Batty Tatter was no longer accessible so the link was dropped. All you need to get added to the challenge is to let me know who you are, what your blog address is, and post your tatting for us to see. You've been added back to the link list and I'll check your blog from now on.