Gwen can move on to row three on Renulek's Spring Doily 2015 which got put on hold when she was making Easter eggs.

Mary Lena found tatting these medallions in a rainbow of colours relaxing. 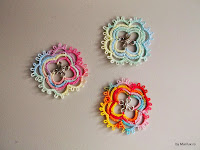 Julie shows how she dealt with thread ends so that they didn't show in her variegated thread lace. 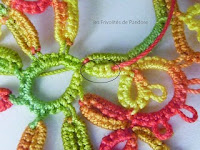 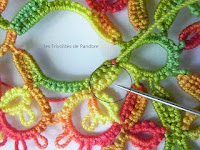 Sue read the instructions incorrectly, so this is the second try at the Jan Stawasz Monster Doily. She almost got round 2 done, but ran out of thread. She re-filled her shuttles to finish it. Her embellished cell phone case has a barn owl on the top flap hunting the mouse on the bottom. The back of it is graced with a windmill and an East Yorkshire rose. 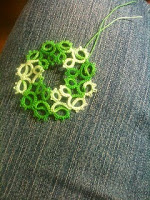 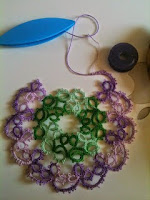 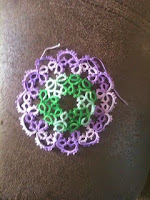 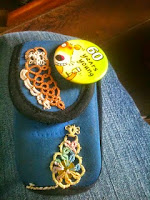 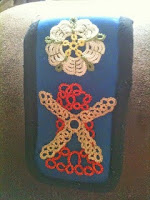 Claire made a modified version of the floral bookmark by Kersti with her instructions for making it.

Diane is still working on Mary Konior's Spinning Wheel Glass Mat in Caribbean. Here's the whole Spinning Wheel finished. She's about half way through working on this round of her Jan Stawasz Masterpiece doily. This picture is a little further along. She's tatting rings and chains of this round in between working on invoices for her hubby. 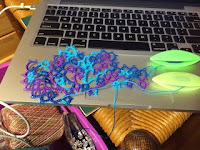 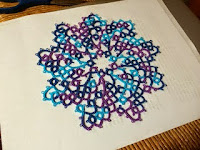 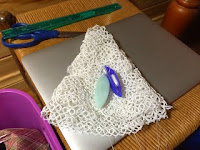 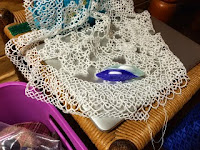 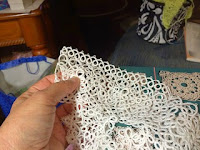 Fox is using #80 Lizbeth for this Polish Oval Doily and so far it measures 7" x 4". The joining of these 12 motifs to the main work has her very nervous. Her blue doily is growing. Then there was some practise-tatting of a loop-tatted ring. She found a mistake 2 rows back so she has to stop and fix it before she tats any more. 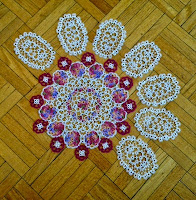 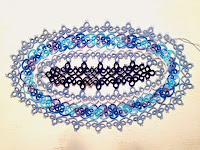 Lilas was inspired by one of Mary Konior's designs and used it a a basis for the creation of this bracelet. 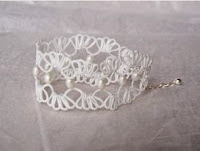 Marie finished the last round on her square doily. The coral bookmark was made using up thread on her shuttle. Since she had more thread to use up, she did a second one. The changeable doodle on the left were her first earrings made using up thread and the second variation is on the right. That put her back into designing mode and she has several new variations completed. 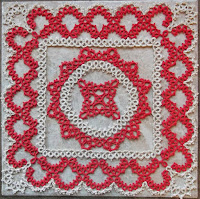 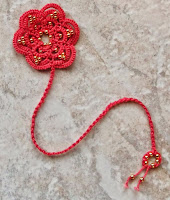 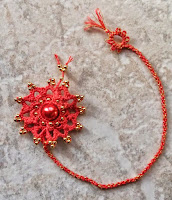 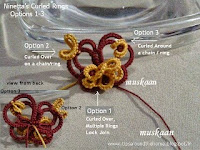 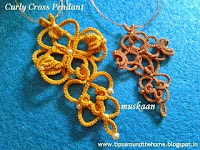 Stephanie was experimenting with beads and created an interesting fringe. Then she added long beaded picots to a tatted 'wheel' then realized that she should have put some beads on the shuttle to use in the center on the bare thread spaces. It took her a few days to get brave enough to try her first bauble, but the second one was much easier than the first. Then she tried using size 20 Lizbeth, size 11 beads, and a nylon thread that is about the equivalent of size 80 to make this fringe. 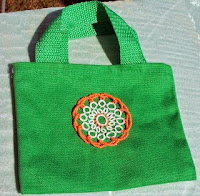 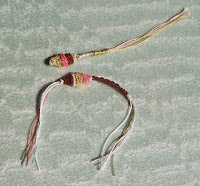 HisKid got back to her 2014 Renulek's Spring Doily, where she has just a little more to go before she can start the last round. Here's the penultimate round done. 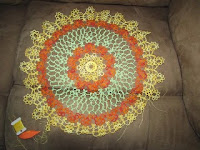 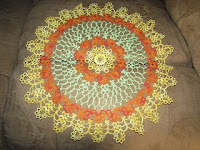 Wanda has a lot of tatting in the works, but nothing at the photographic stage, so she post a picture of a doily she did some time ago.