Julie used Yarnplayer's Sugar Maple HDT to tat Mary Konior's Black Magic from Tatting With Visual Patterns. She used a lock stitch chain and a modified section of the design for a tail. 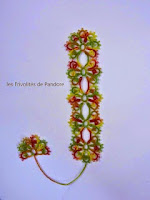 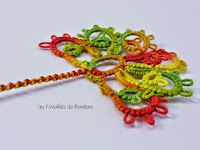 Sue received her copy of the Ring of Tatters newsletter which resulted in this lovely bracelet being tatted while she lazed in the sun drinking her coffee. 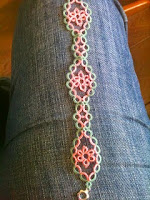 Nancy has a necklace and earring set done using the "Landing" pattern by Tatting Box. She also has a charming pair of tatted booties done.

Diane is almost finished this round of her "Masterpiece" doily. This is round 9 completed of the Jan Stawasz Masterpiece, and it now measures 19 inches. 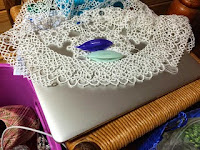 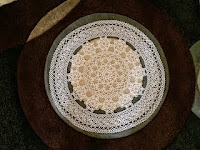 Fox found the problem with the oval design. It seems a chain didn't get joined where it should resulting in a missing pattern repeat. She fixed it by adding an extra ring, and it looks okay at first glance, but adding the next row might ruin it so she's going to stop for now. The cap that refused to cup is starting to cup now that she's using the right thread. 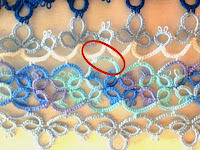 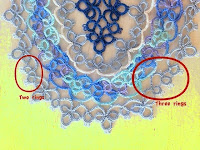 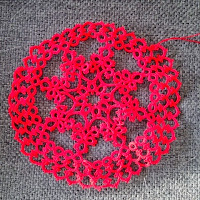 Kristen tatted this interwoven piece and used size 20 for the white and size 40 for the colours. She met up with another Canberra tatter they have both been working on a Jan Stawasz pattern from Tatting Theory and Patterns. Lots of individual motifs have been tatted. 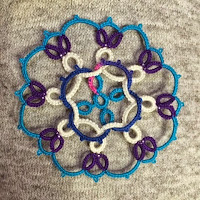 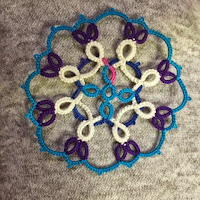 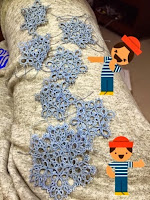 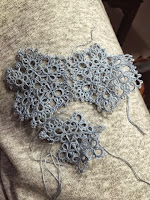 Marie made this lovely bracelet to go with her swirl earrings. One design led to another and she made this bracelet. What's a bracelet and earrings without a pendant? Here's the complete set.

Muskaan experimented with inverted curled tatting and concluded that it's a great technique for 3D designs. The pattern for this example jewellery motif is available in PDF. 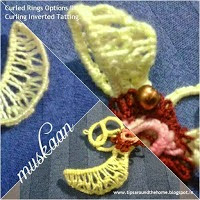 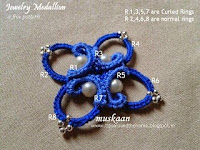 Phyllis has been doing a lot of test tatting by in between she made the green doily, from the Spring 2015 issue of the Bulletin of IOLI, called Whirl by Randy Houtz.  The snowflakes are from the book The Complete Book of Tatting by Rebecca Jones.

HisKid made this bookmark for one of the men in the senior's group who likes yellow and white, so she used size 40 Lizbeth Pineapple Parfait for this bookmark.

Wanda tatted her own "Mandy" Edging in Lizbeth #694 Harvest Orange Medium and #692 Mocha Brown Dark size 10 to border a runner. 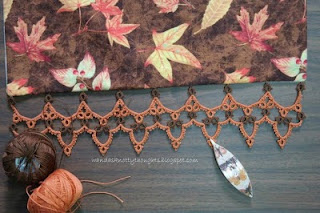