Mary Lena has joined the tat-along on Craftree where they are working on The Cobweb doily pattern using some of her own hand dyed thread (HDT). 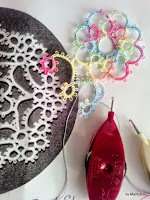 Linda is working on rounds 4 and 5 of Renulek's Doily which will take some time to complete. 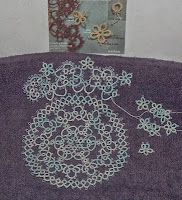 Cindy is still working on Round 11 of the WIOSNA 2015 Spring Doily although she has has had a lot of other things take up her time recently. She chose to add in pink again on this round and has just noticed a spot where she neglected to join the single ring on both sides. 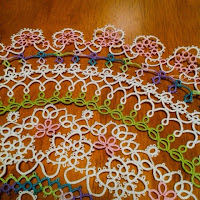 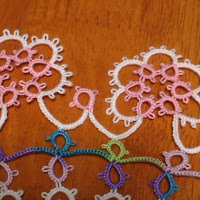 Diane is at it again, the Spinning Wheel glass mat by Mary Konior, this time in size 10 Lizbeth, #122 Caribbean. 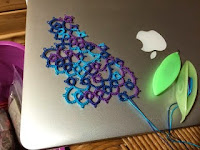 Lilas has a tutorial on mock rings like those used in these earrings.

Marie has round 2 done on Doily III from Jan's, Tatting Theory that she's working in size 10 thread. And here is round 3. Followed by round 4. 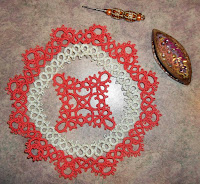 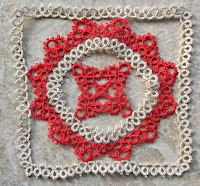 Muskaan has worked through Ninetta's extension of the Thérèse de Dillmont design and posted her step by step process in making a 3D Morning Glory. The Layered Centre with the long picots. Large petal rings. Ninetta's Curled Rings were used to make the calyx & thread ends were encapsulated within the stem. One long tail of pink thread was left uncut and used to make the Folded ring bud. She also shows the effect of various folded rings and some of their applications. 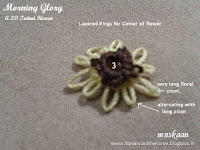 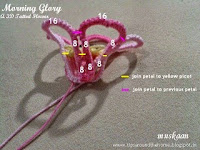 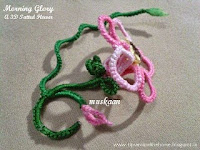 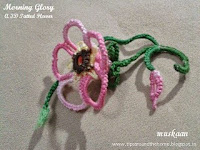 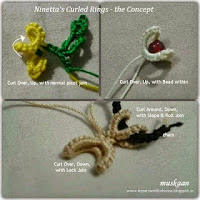 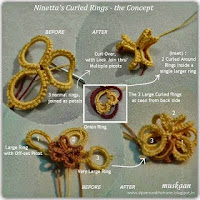 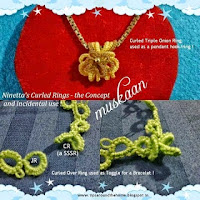