Dorota makes lovely tatted earrings and she has decided it was time to join the challenge with this set in blue brown and white inspired by the colours of bright sky, bare trees and fallen snow. How about this Catherine wheel pendant made in variegated thread, surrounded by points of iridescent blue beads? 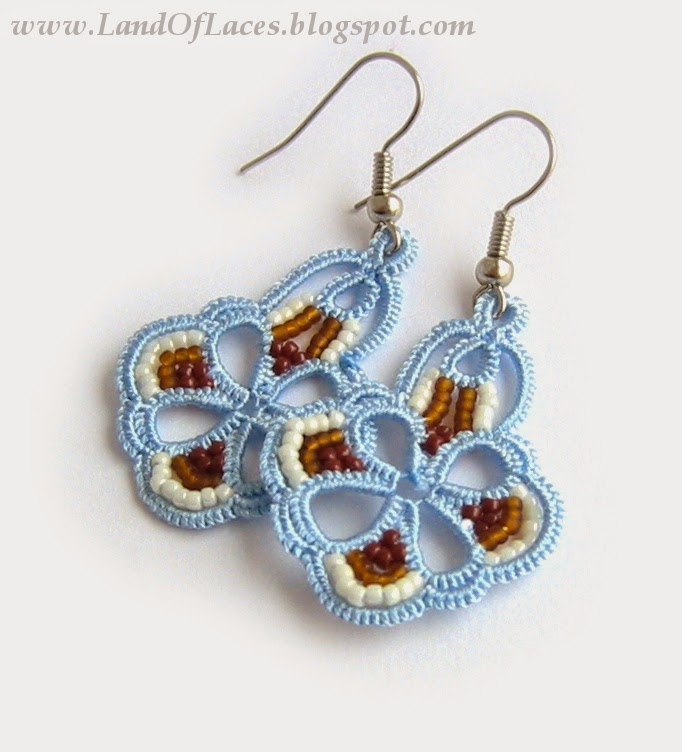 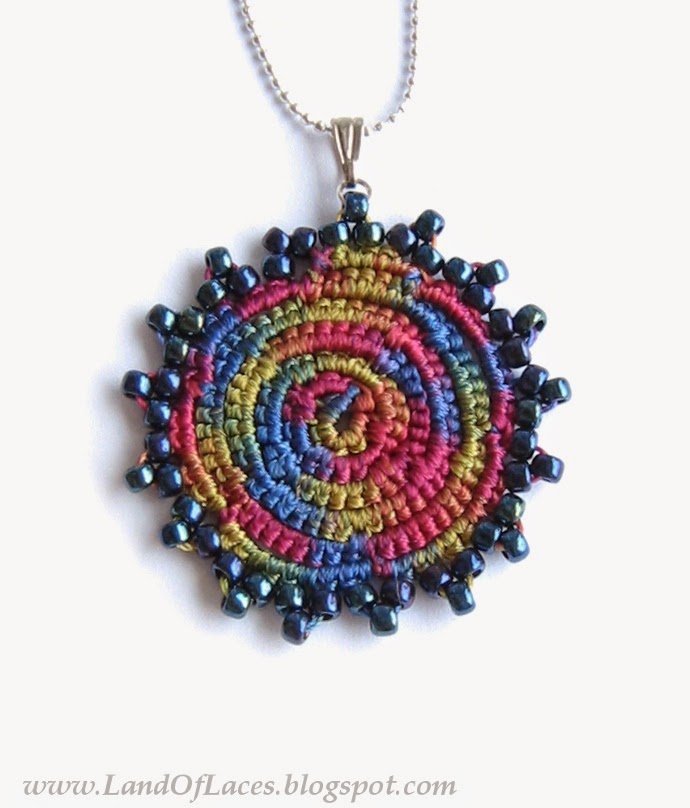 Chantal started Renulek's tatalong last summer and had many false starts, not really paying attention, making mistakes, changing her mind about colours and ended up restarting 11 times. When she did manage to get the inner section done, she didn't like the grey colour. Watching the colour of the sunsets, she went with a more vibrant palette and added beads, but it didn't seem quite right even though her mother liked it and kept it. She started again, without the beads and liked this combination, but she made some mistakes and put it aside. Starting again with a safe colour combination, she was pleased with the results until she noticed a mistake take required scissors to fix. Then it began to all came together to make a lovely doily, except that she has a feeling that this round is cupping a little. 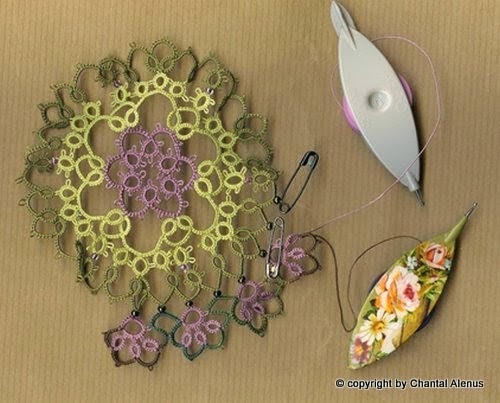 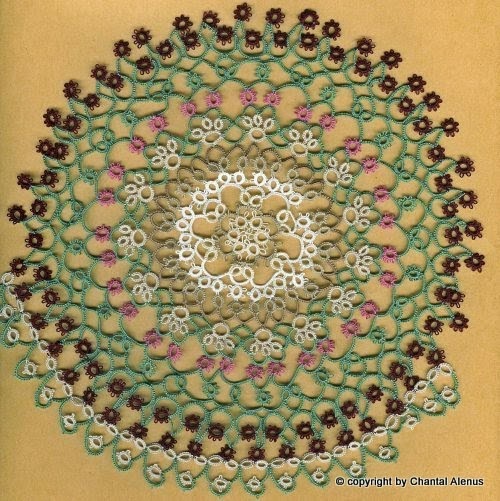 Sue started in on another pair of earrings, these ones are done in size 11 beads in 4 different colours, and yellow thread, with an accent pale green dagger bead hanging from the bottom. Then another pair in gold using 2 shades of blue, white and yellow seed beads, combined with pink twirlz and med daffodil yellow thread. 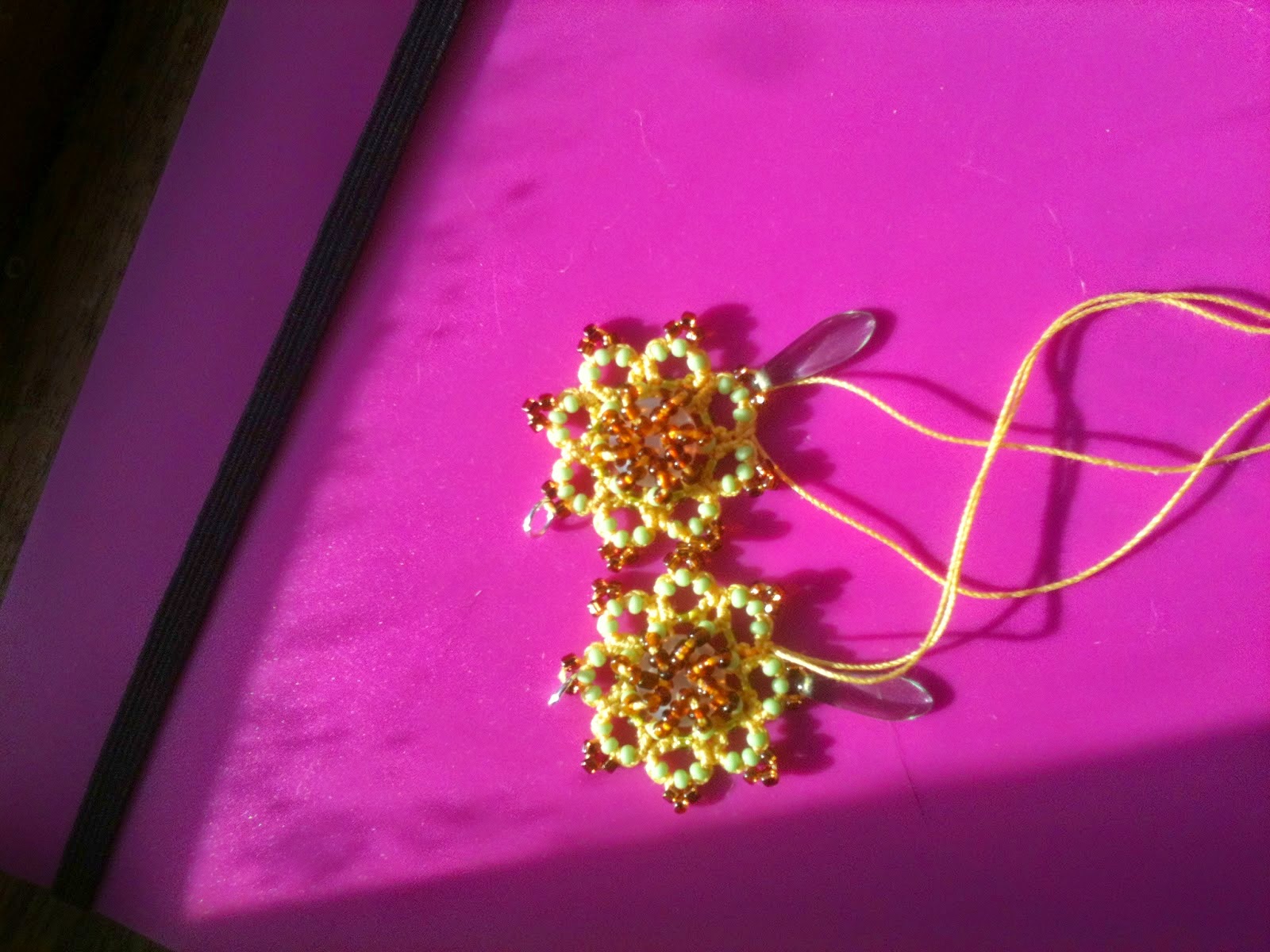 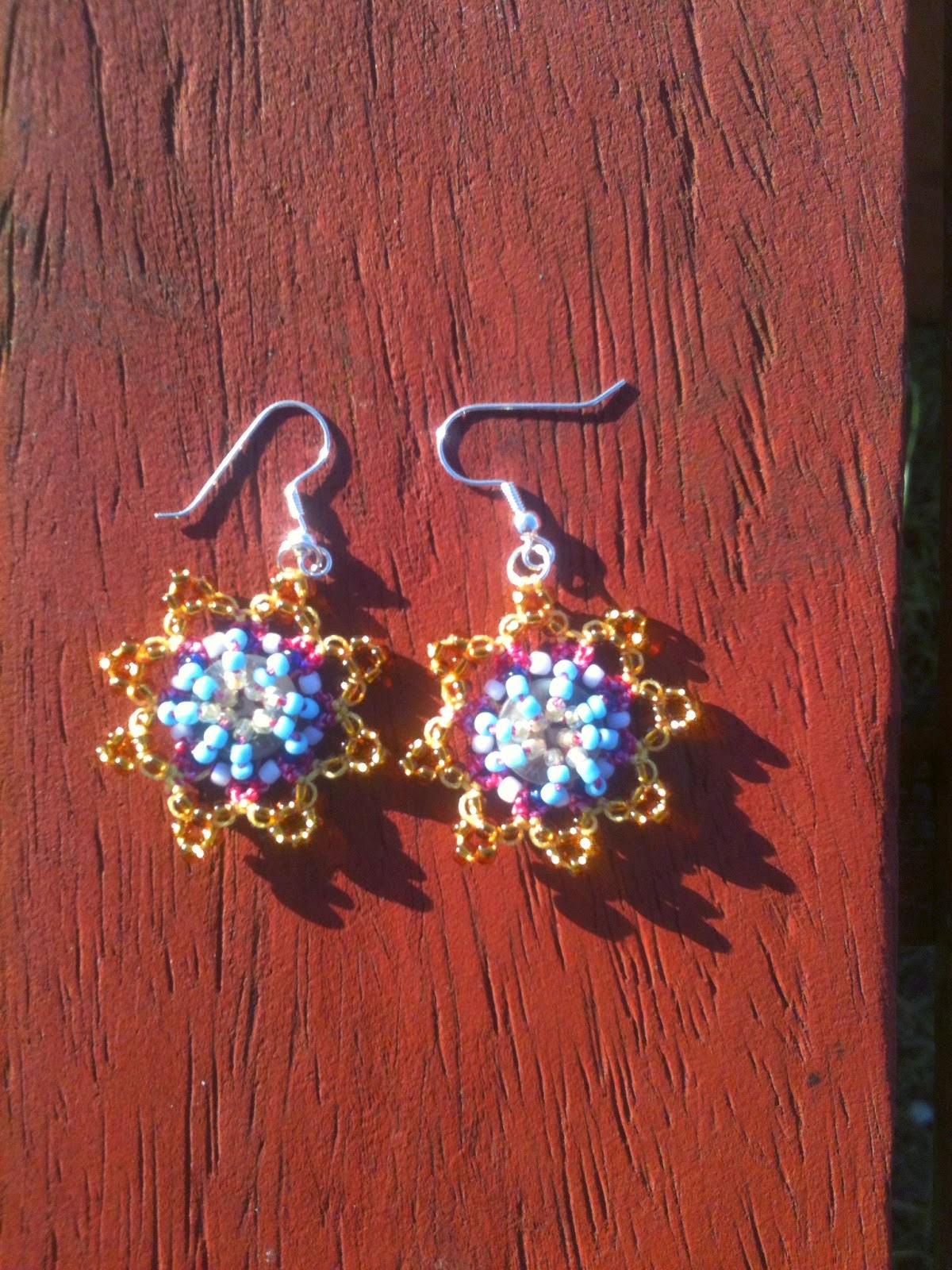 mb duke wanted to jump into making Renulek's 2015 Spring Doily, she still hadn't finished the first one and being a disciplined and dedicated tatter, she had to finish last year's doily first and it was well worth the effort. Now for the 2015 doily which she is doing in Omega 50 Natural.

Lelia has made more of these beaded doodles, called Froggers which will used as favors for the IOLI convention.

Nancy has been tatting baby booties, with the first one sporting a row of tiny pearls at the top. The second one has seed beads.

Cindy was pleased with her new shuttles from La Cossette, emblazoned with a picture of her little Taffy, just right for tatting. Wiosna 2015 Doily at round 5 seemed like it should be quicker, but it isn't. All the little flowers are fast, but hiding the ends is not. 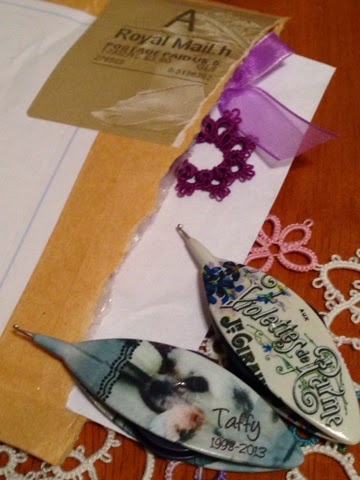 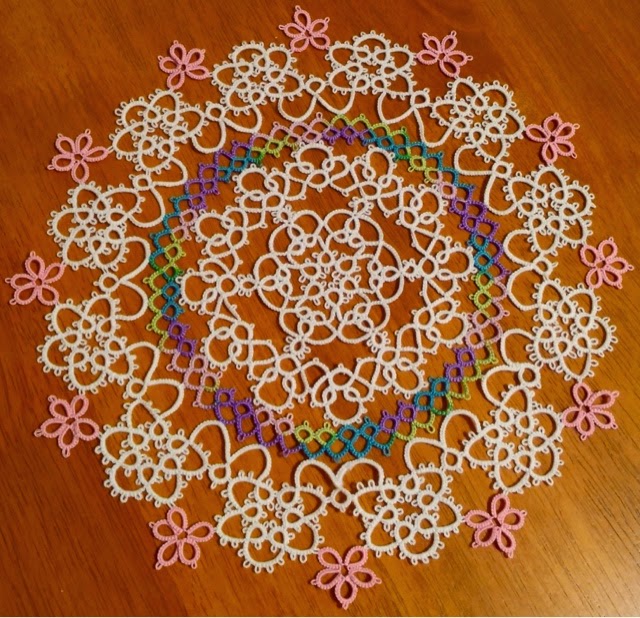 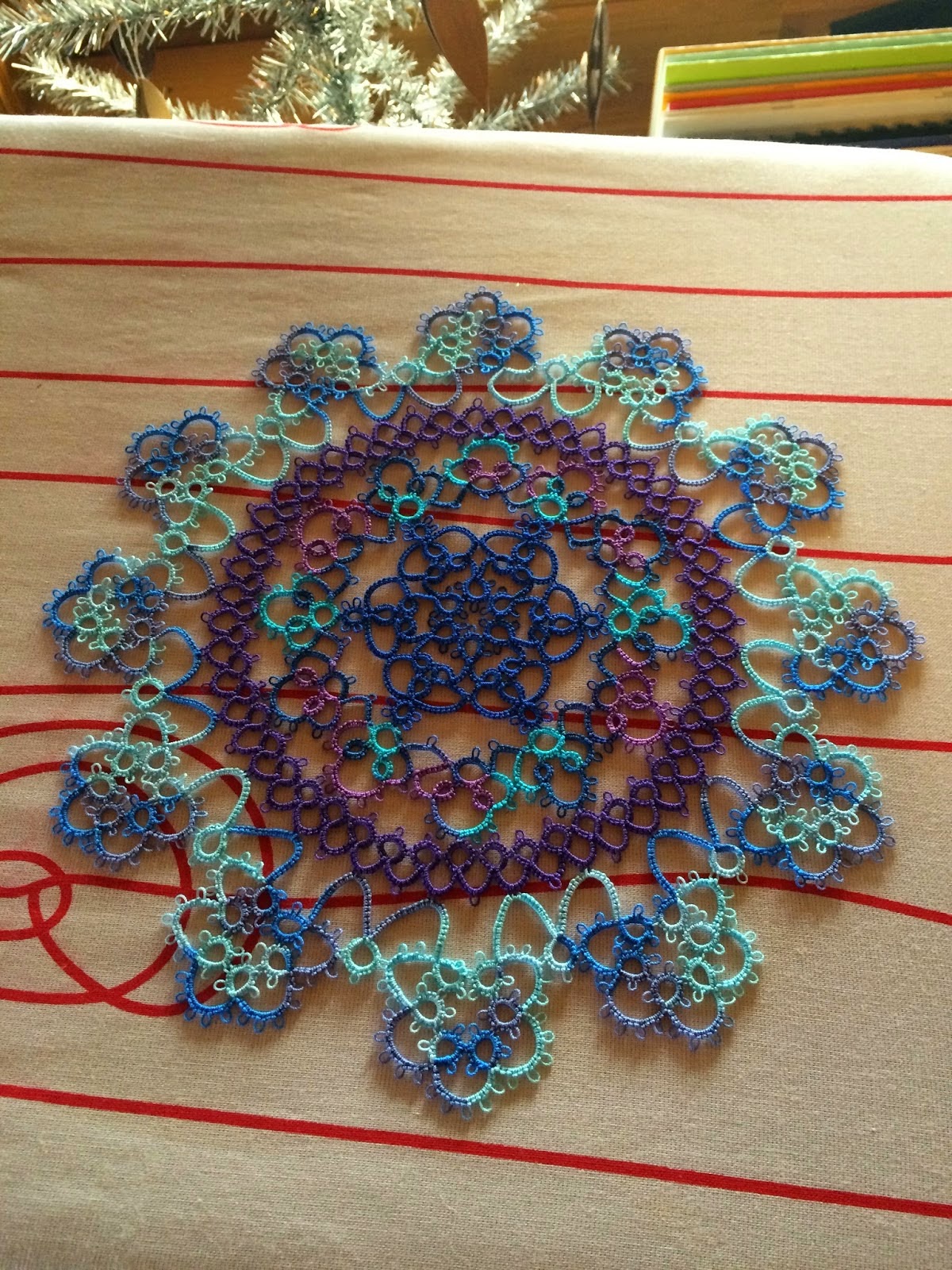 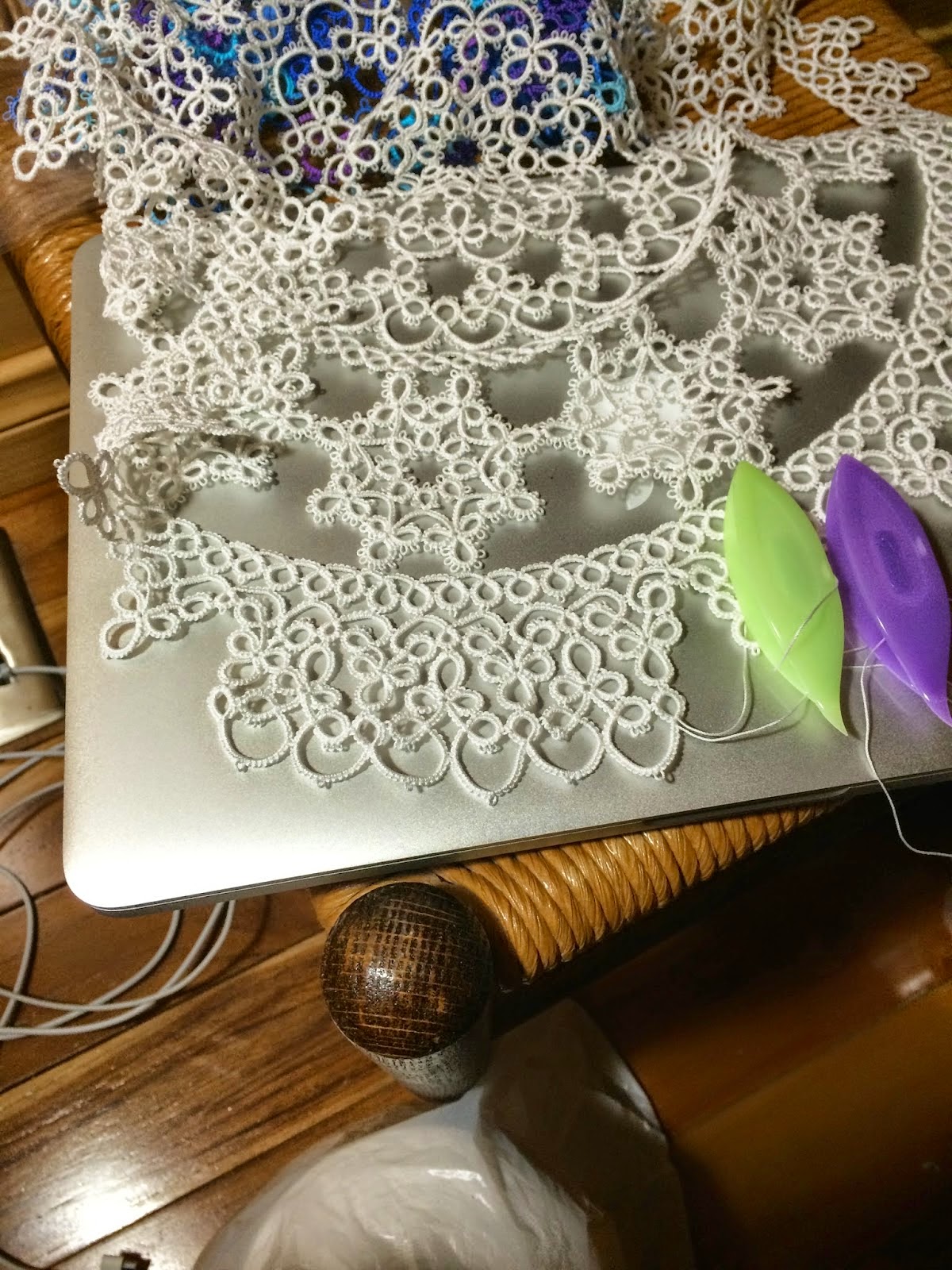 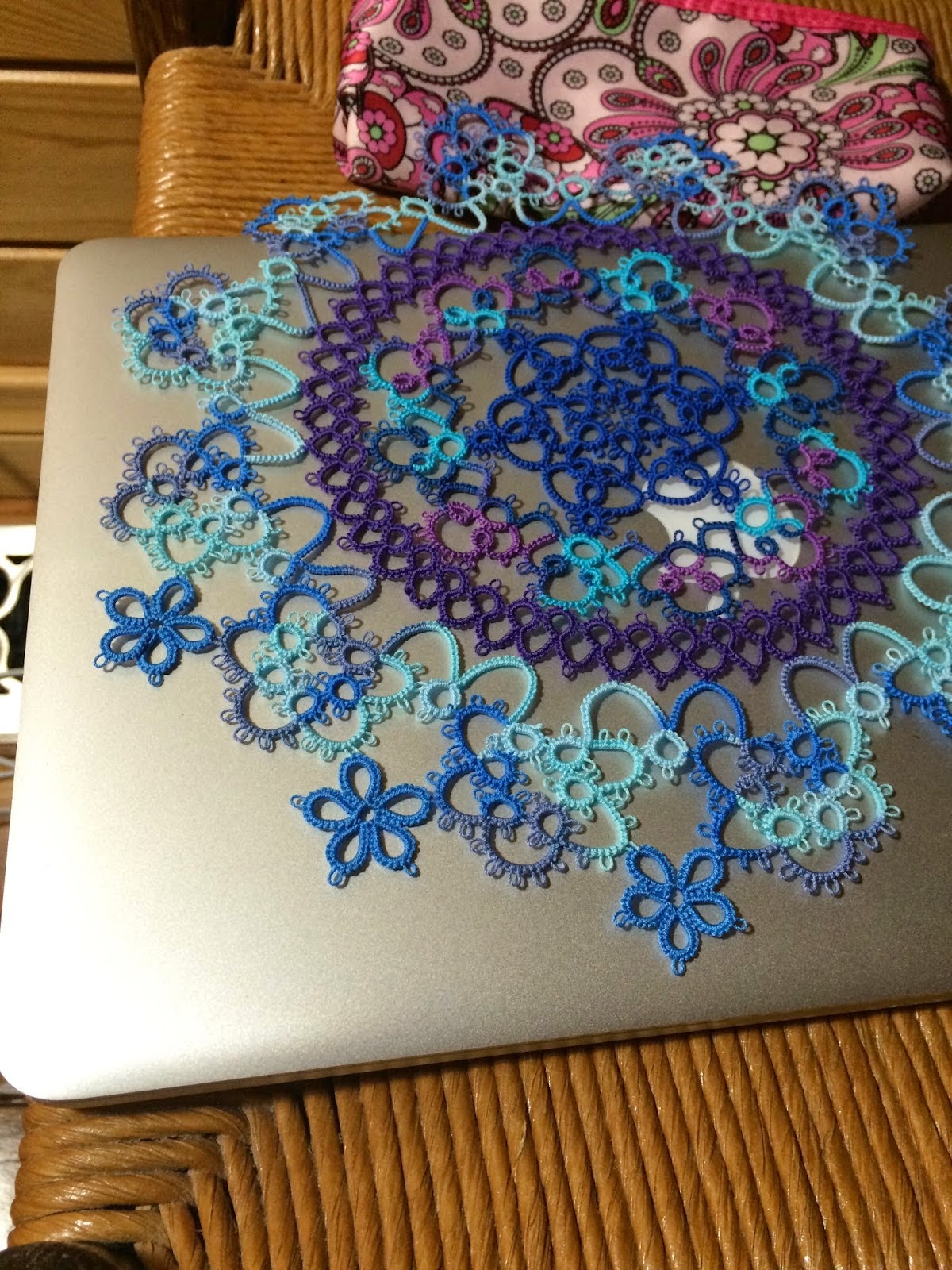 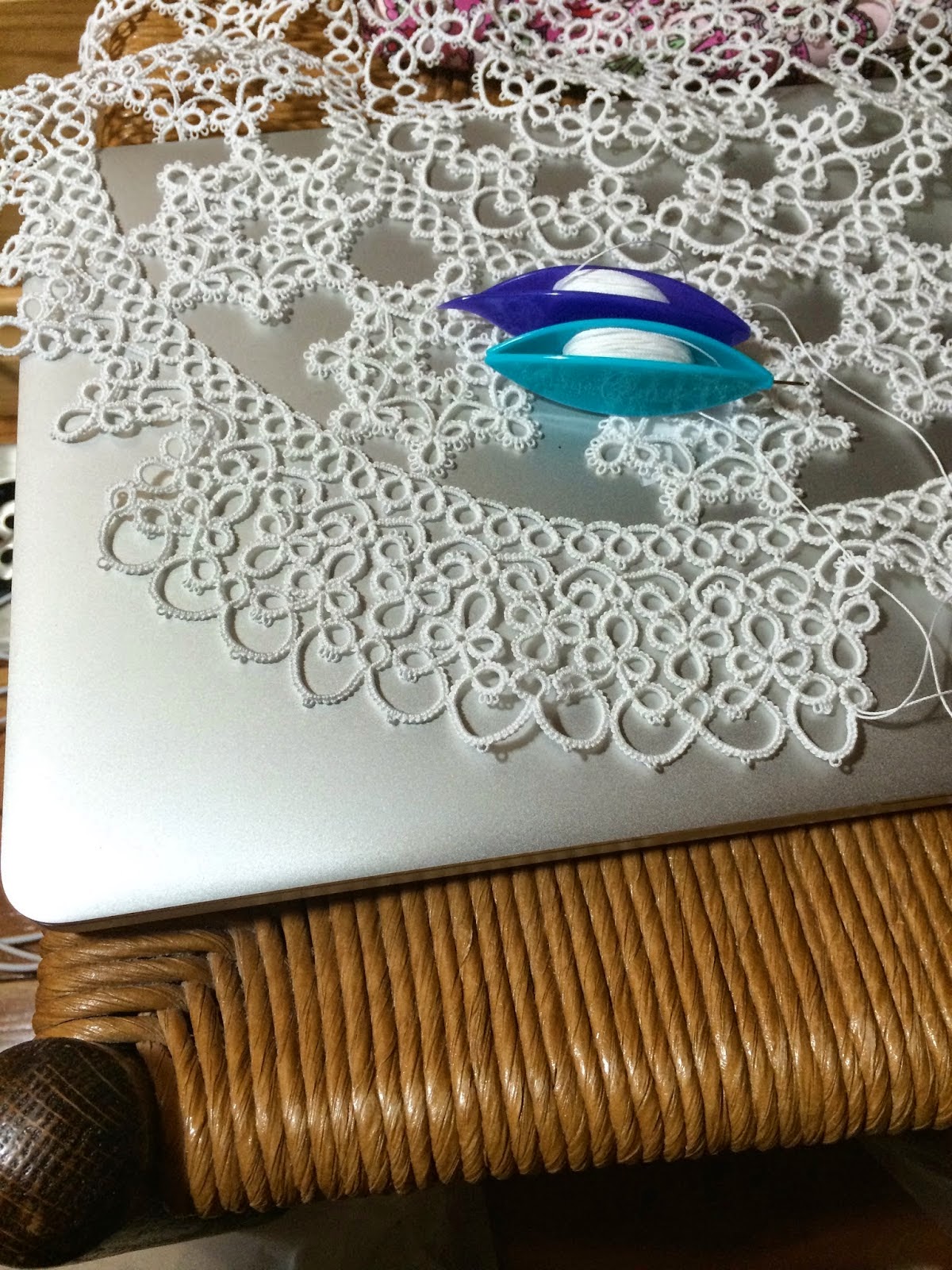 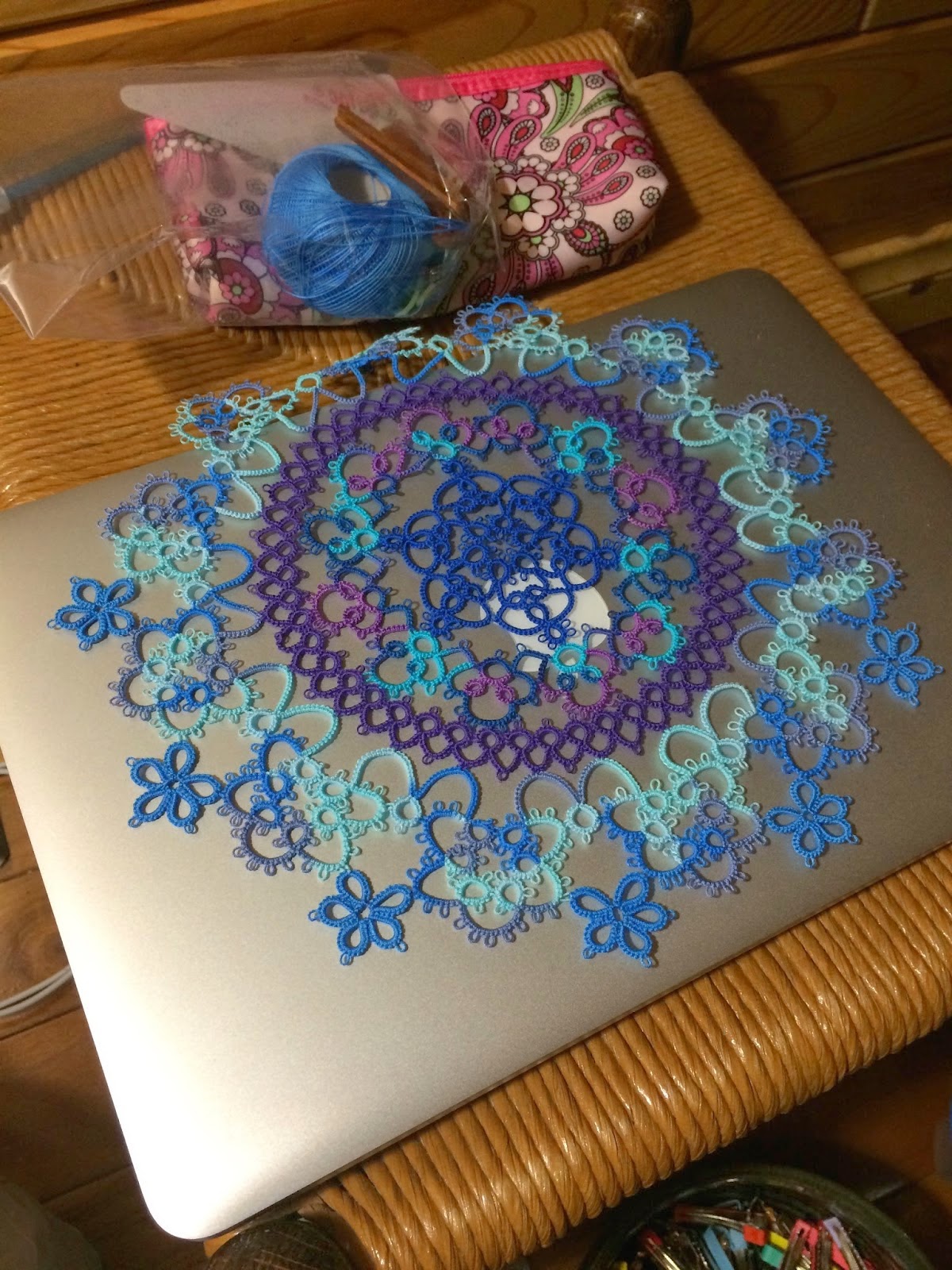 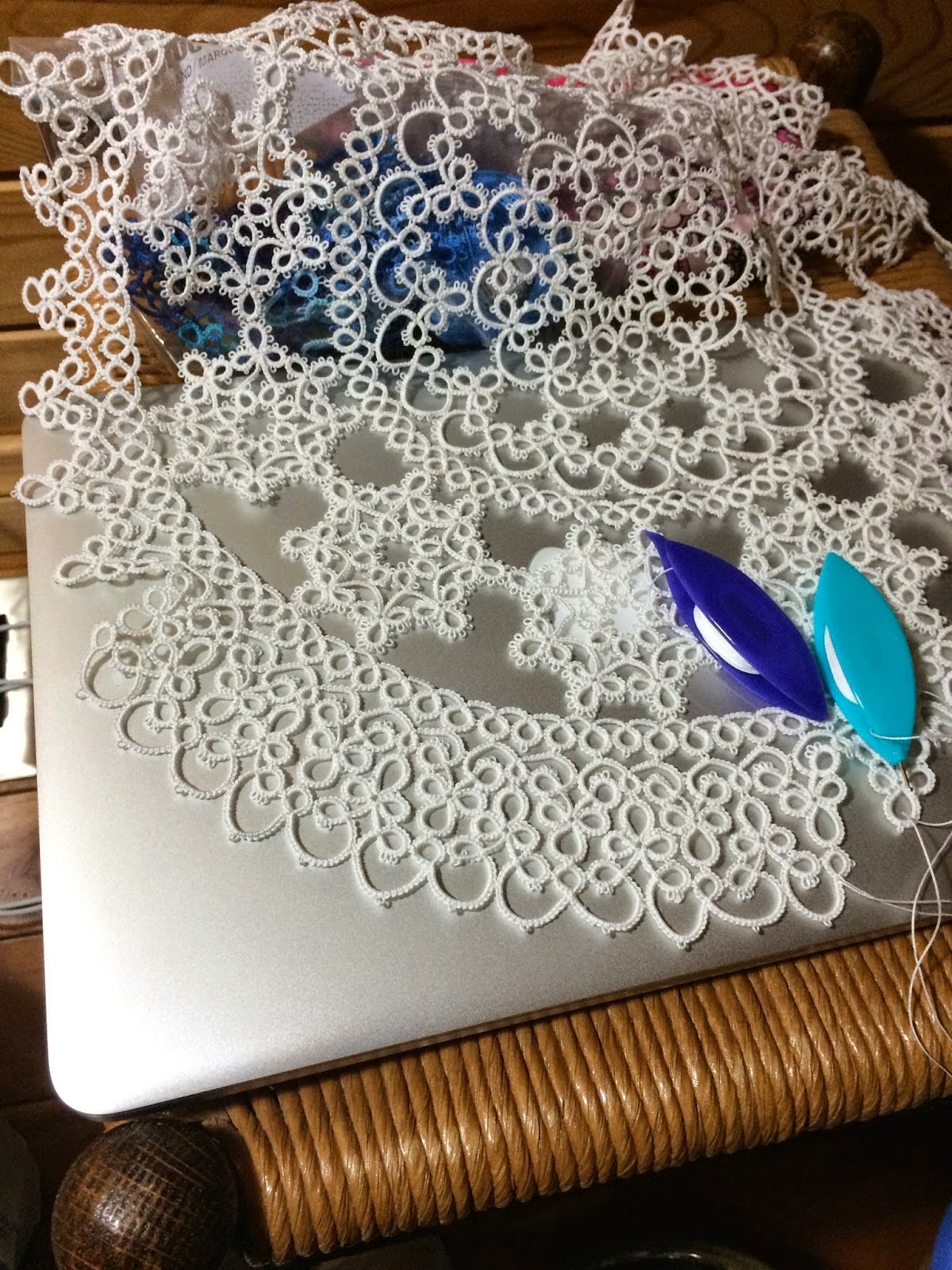 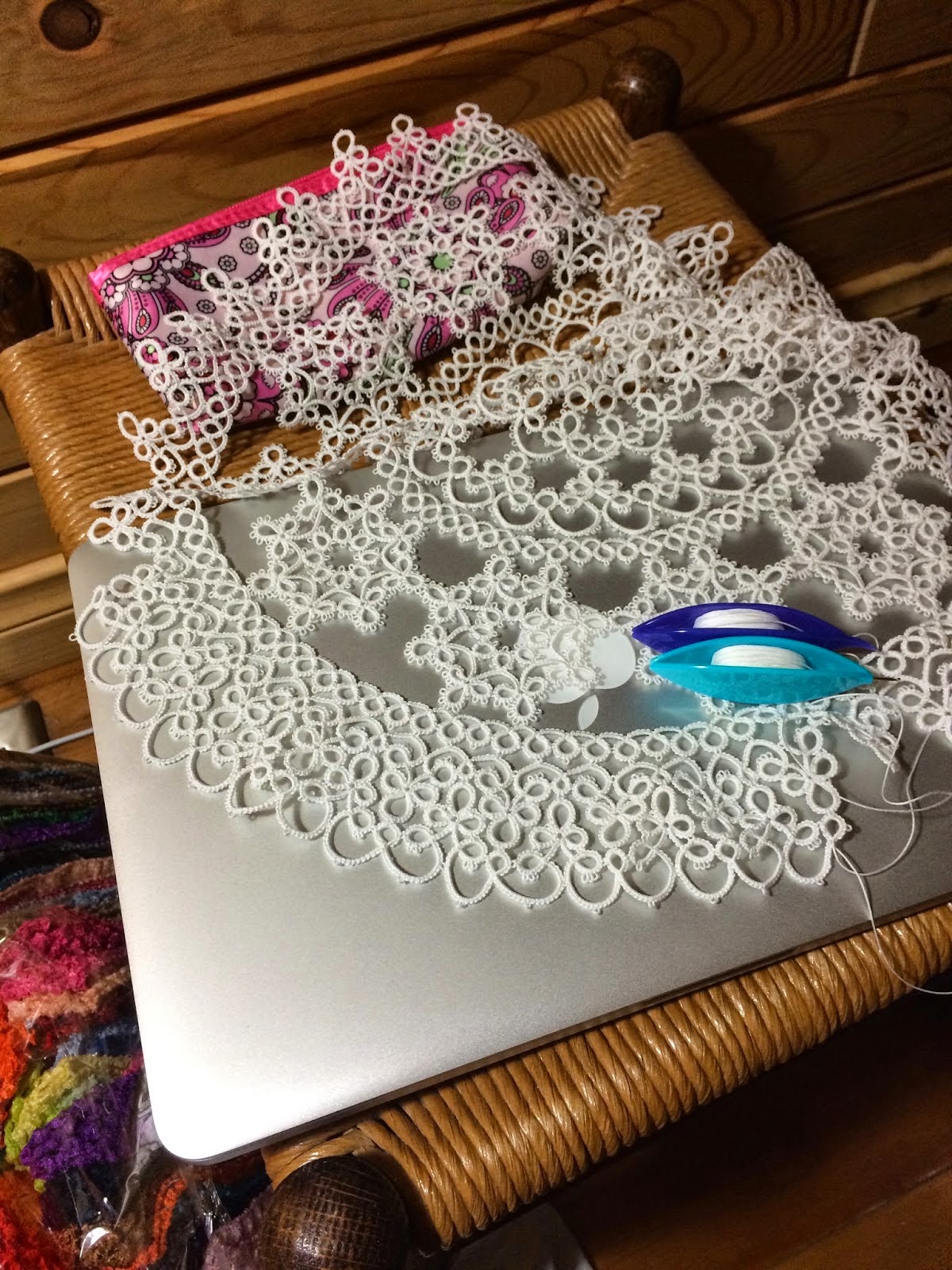 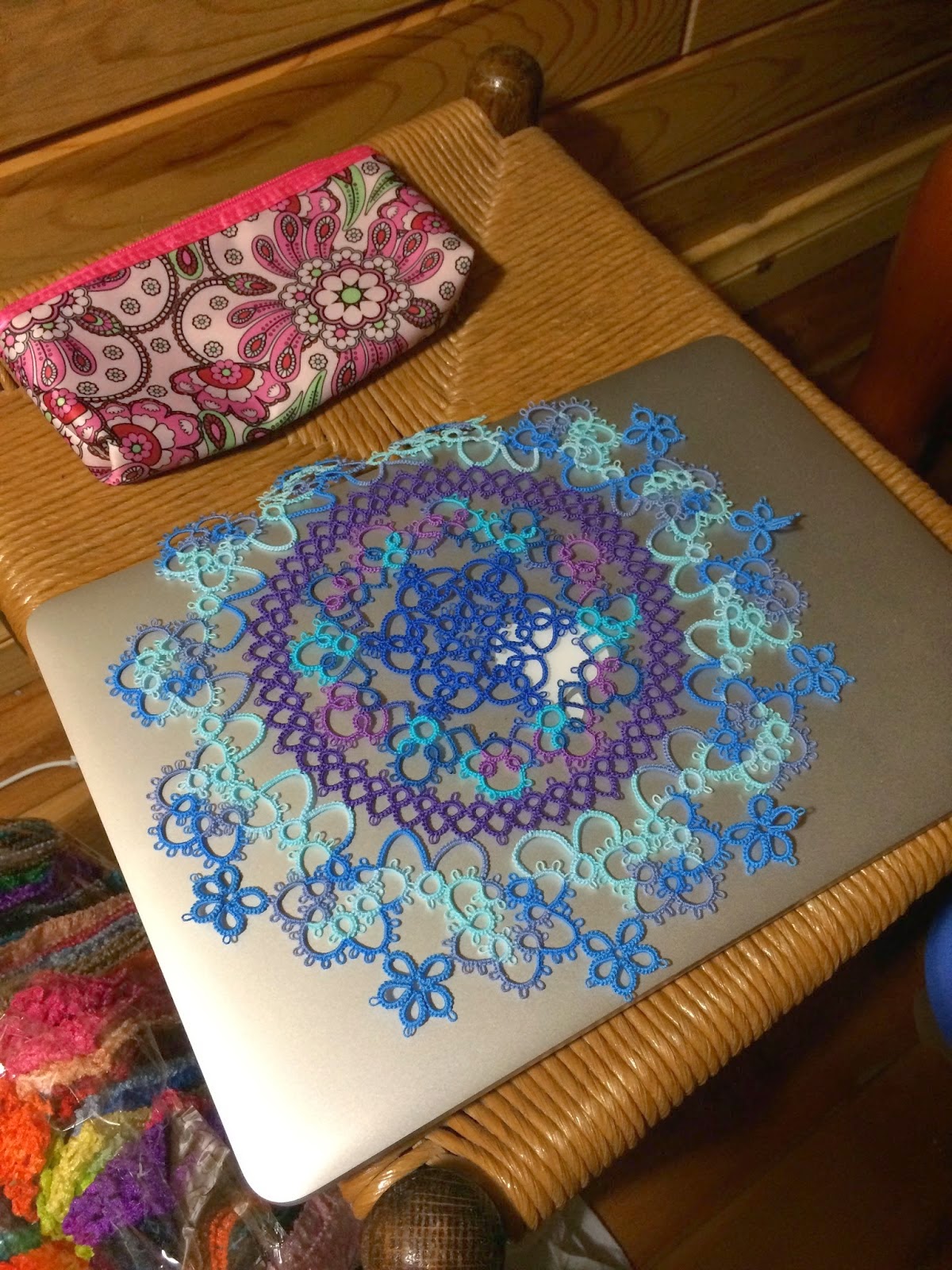 Fox has the 5th round of Renulek's 2015 doily completed. The Morimoto doily is almost done. Here is it finished, Tomoko Morimoto Design from New Tatting in #40 Lizbeth thread, about 19.5 inches across. 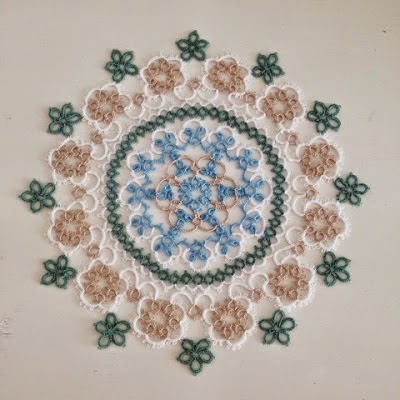 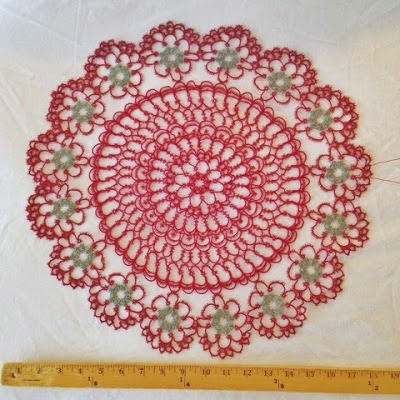 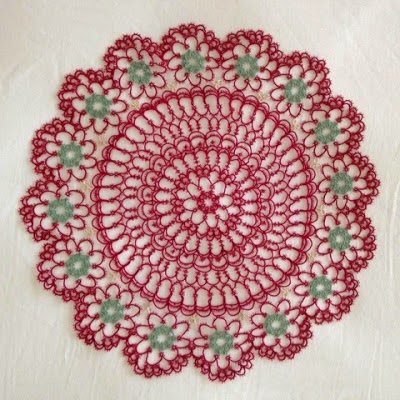 Lilas posts this Ankars inspired Floral comb design and shares the pattern for it. 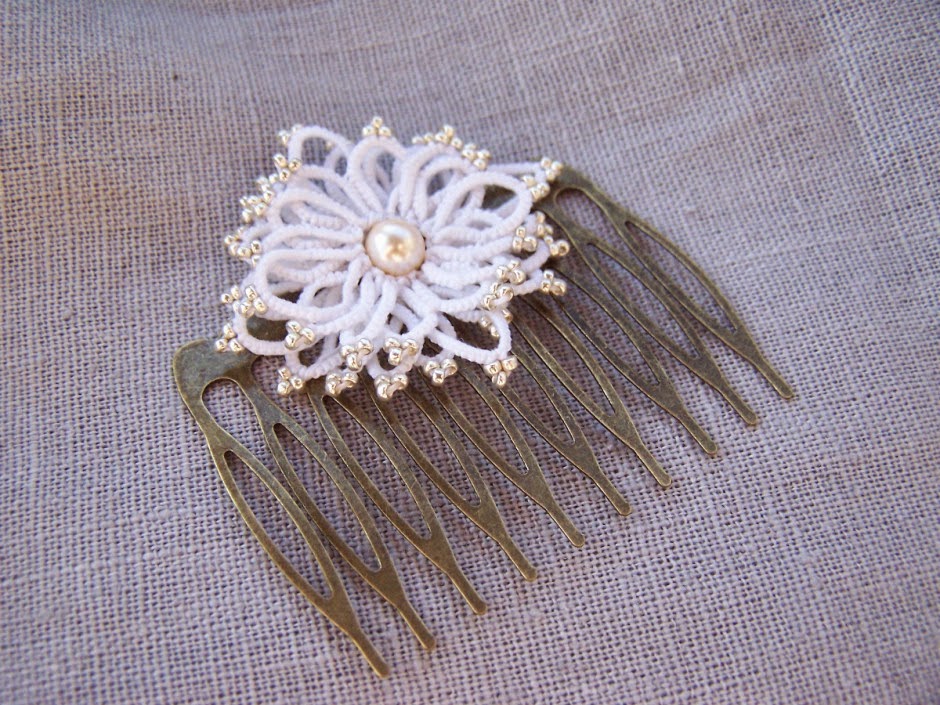 Margaret has Renulek's Wiosna Mat round four finished in Lizbeth thread, no 20 in Countryside and white. 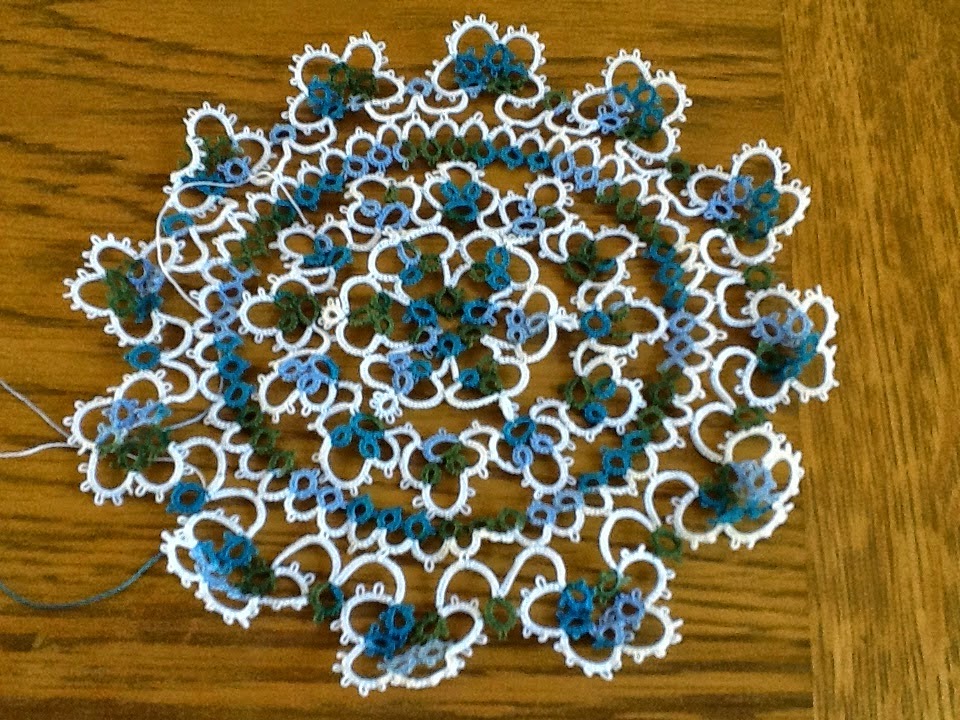 Marie added pearls to give this ornament flair and texture. The Pearly Rose is another of Lene Bjorn's patterns and one of Marie's favourites. Tatted Rings is one of Jon Yusoff's designs, as is this Flowery design that sports Josephine knots along the perimeter. This last design is another of Jon's patterns. 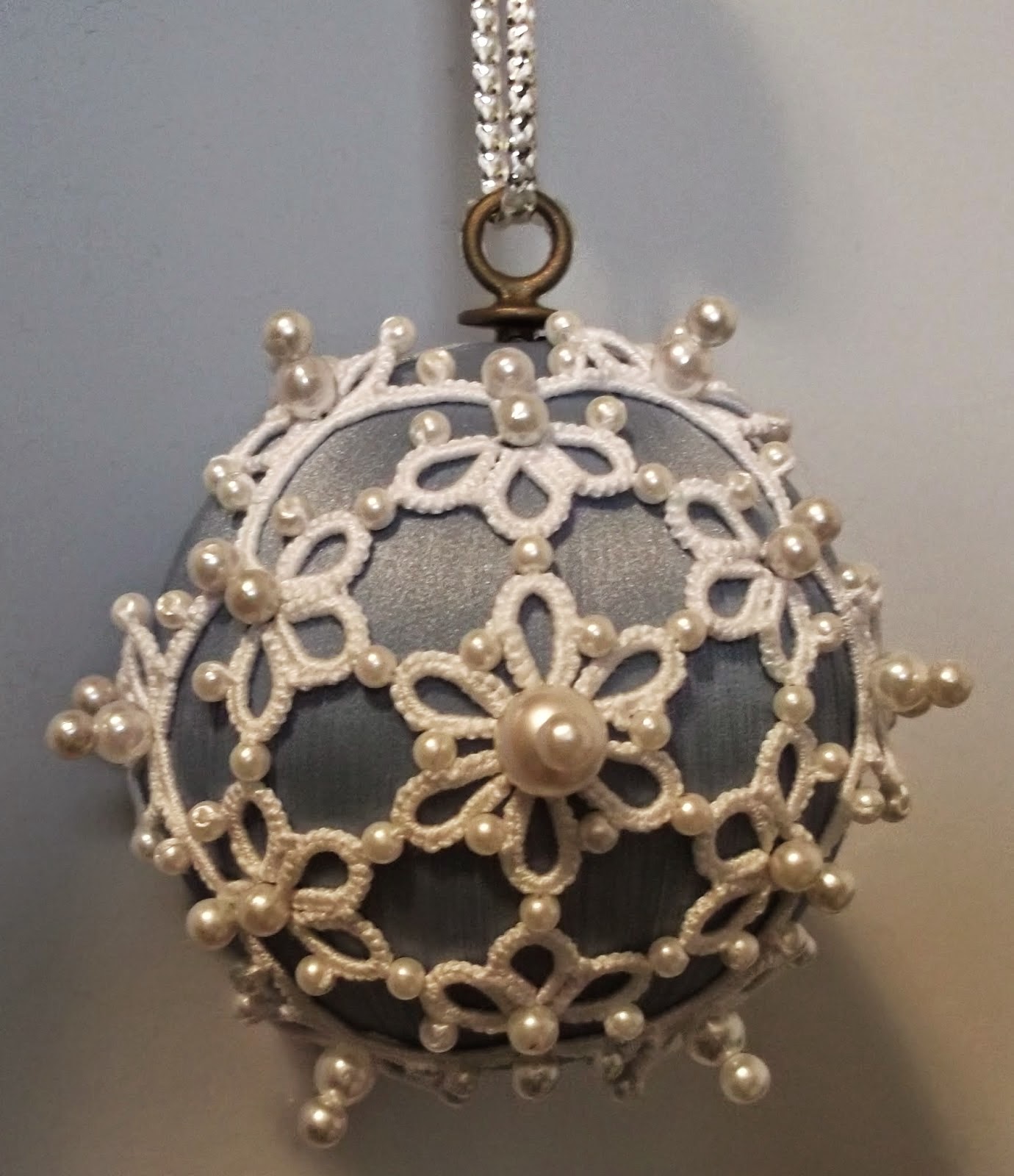 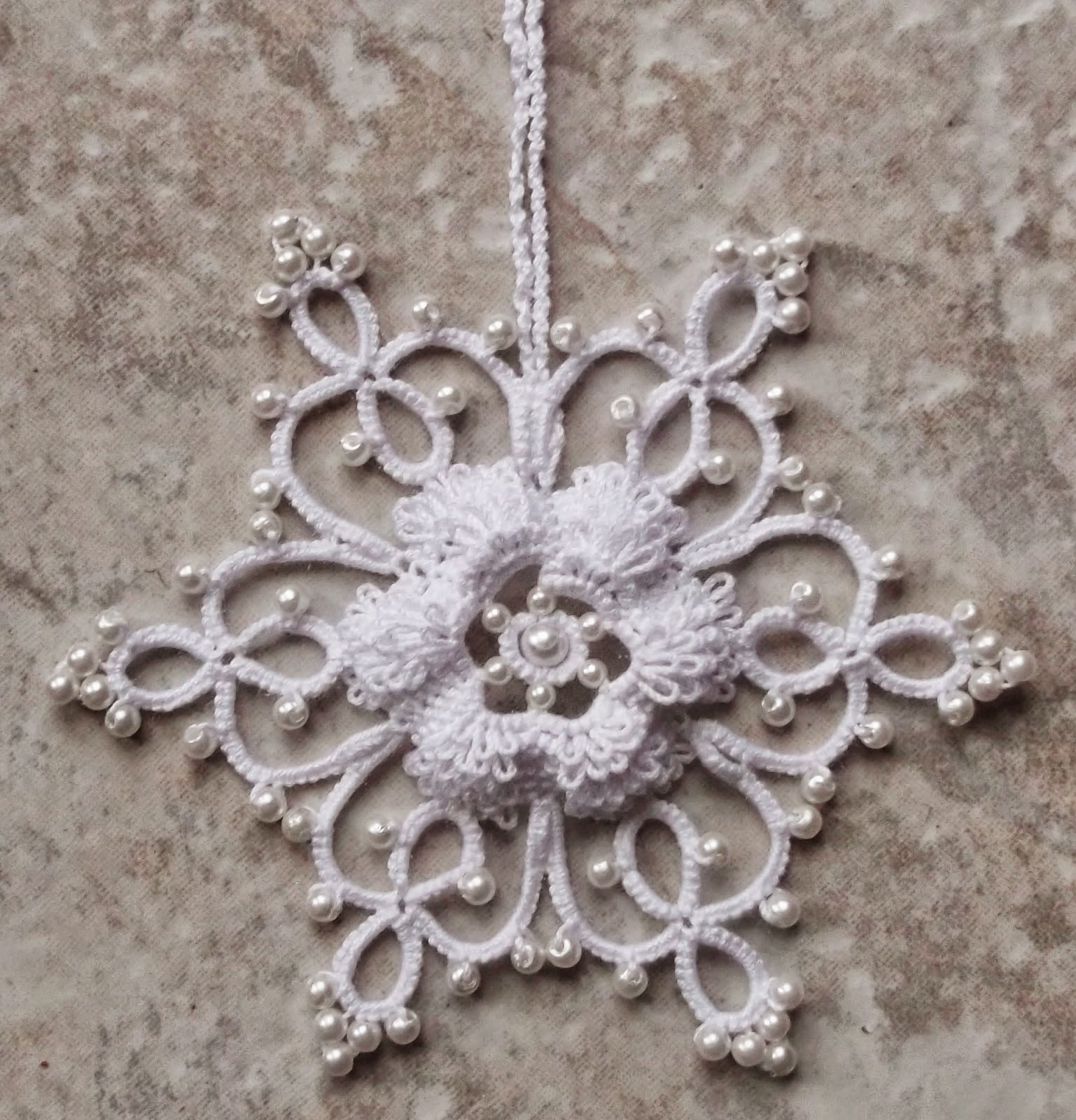 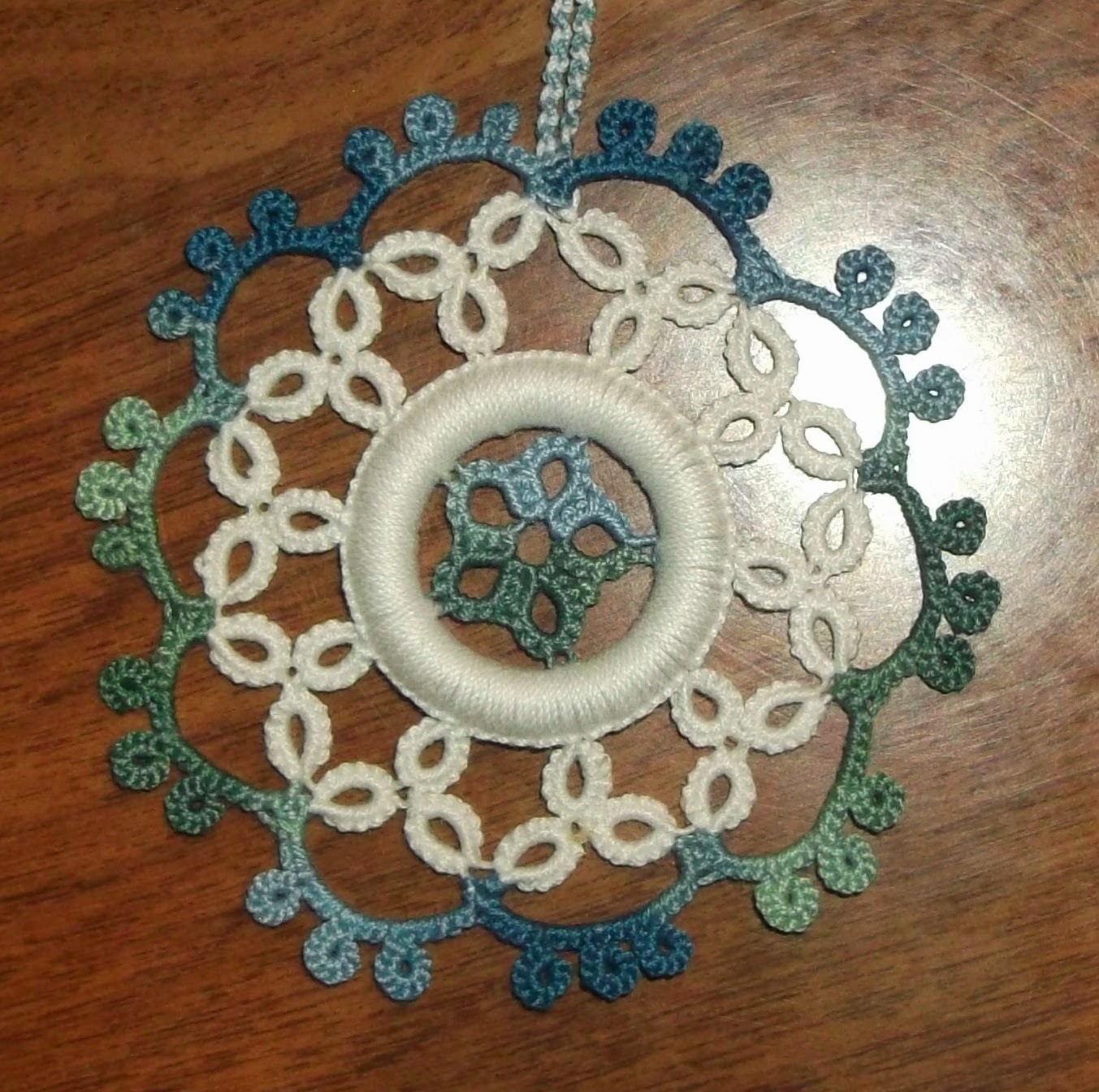 Martha is on round 4 of Wiosna, Renulek's current doily and in size 80 thread it's 5.5 inches across. Read about the clever way she fixed a horrible mistake. 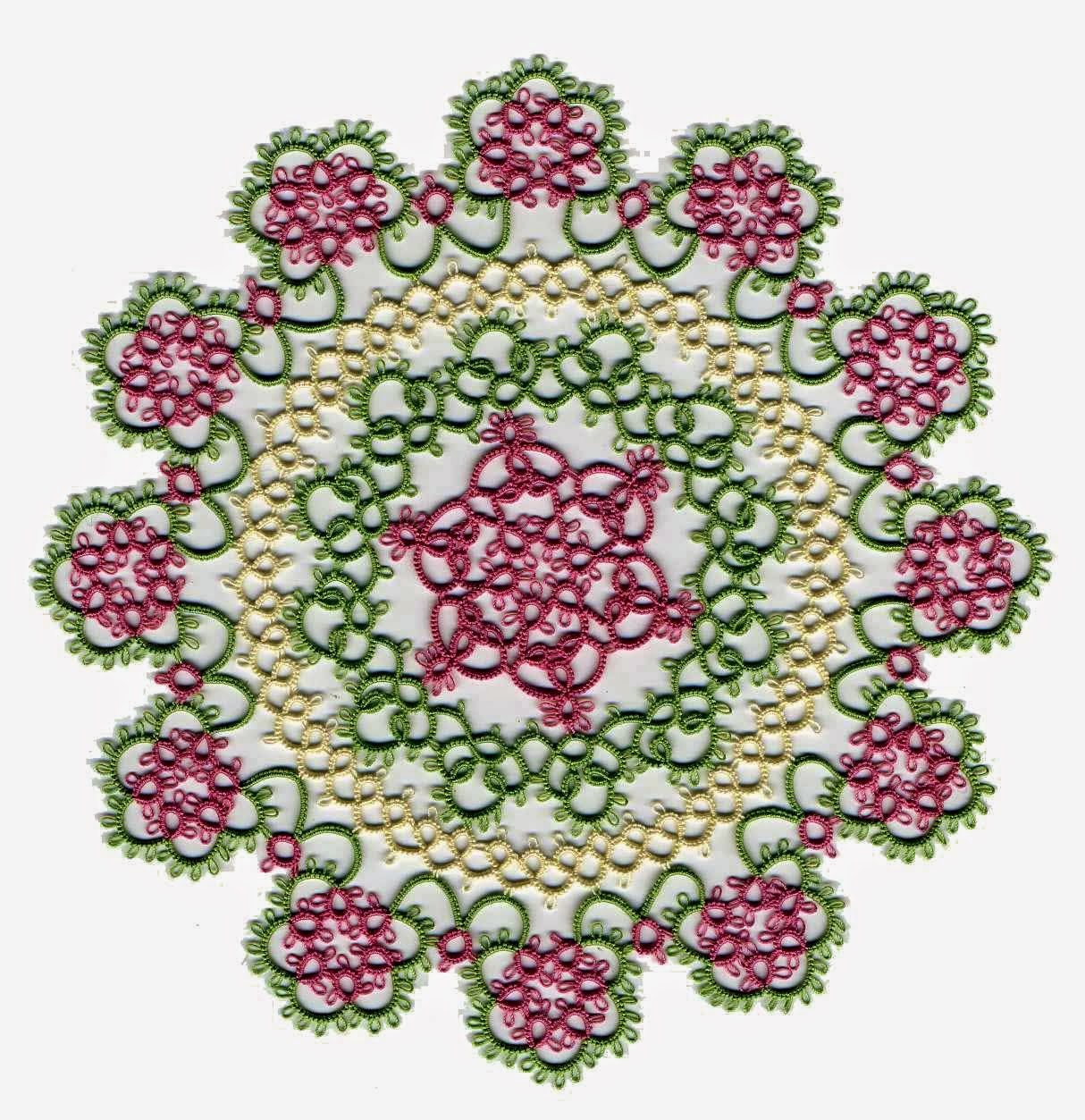 Muskaan is pleased that she was able to create her first diagram in PDF format for her Neemiss Snowflake, so that she can share the pattern. 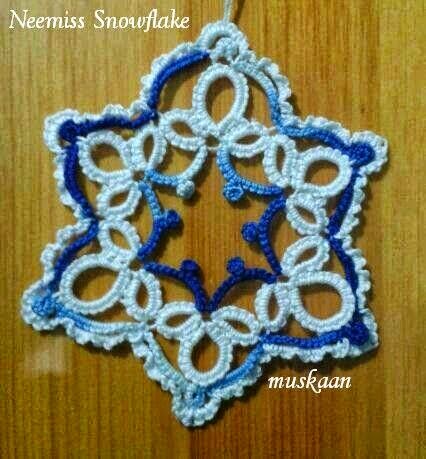 Wanda made this doily that had a lot of switching shuttles in ecru and she wondered what it would look like in 2 colours. This one is made with Lizbeth #658 Ocean Turquoise Light and #657 Ocean Turquoise Dark, both in size 20, and it looks gorgeous.