Mary Lena made earrings with six petals and pearls and metal accessory bows. 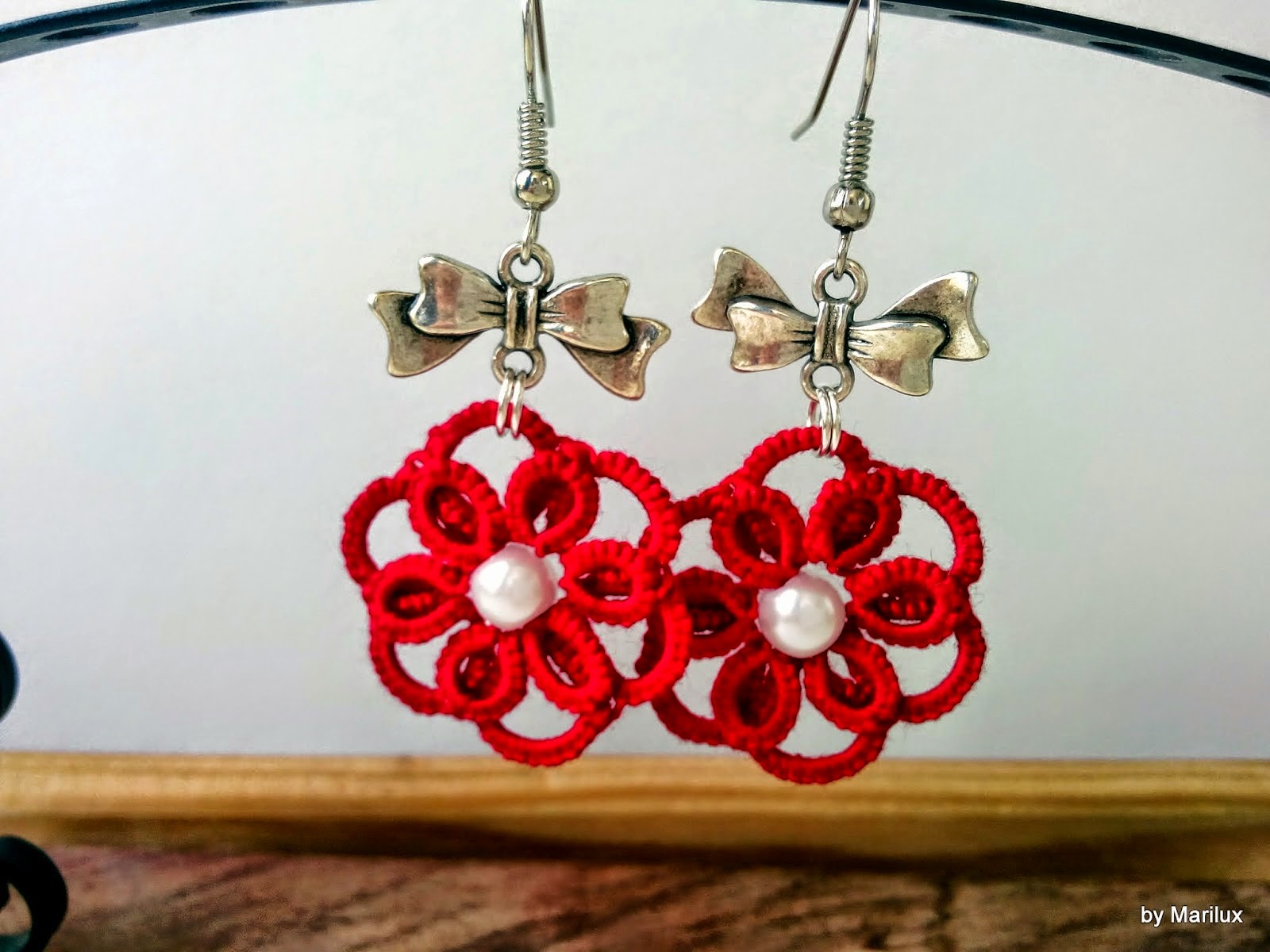 Julie P made these Wave earrings from a pattern by Corina Meyfeldt in size 30 Penny thread, colour Turchese. 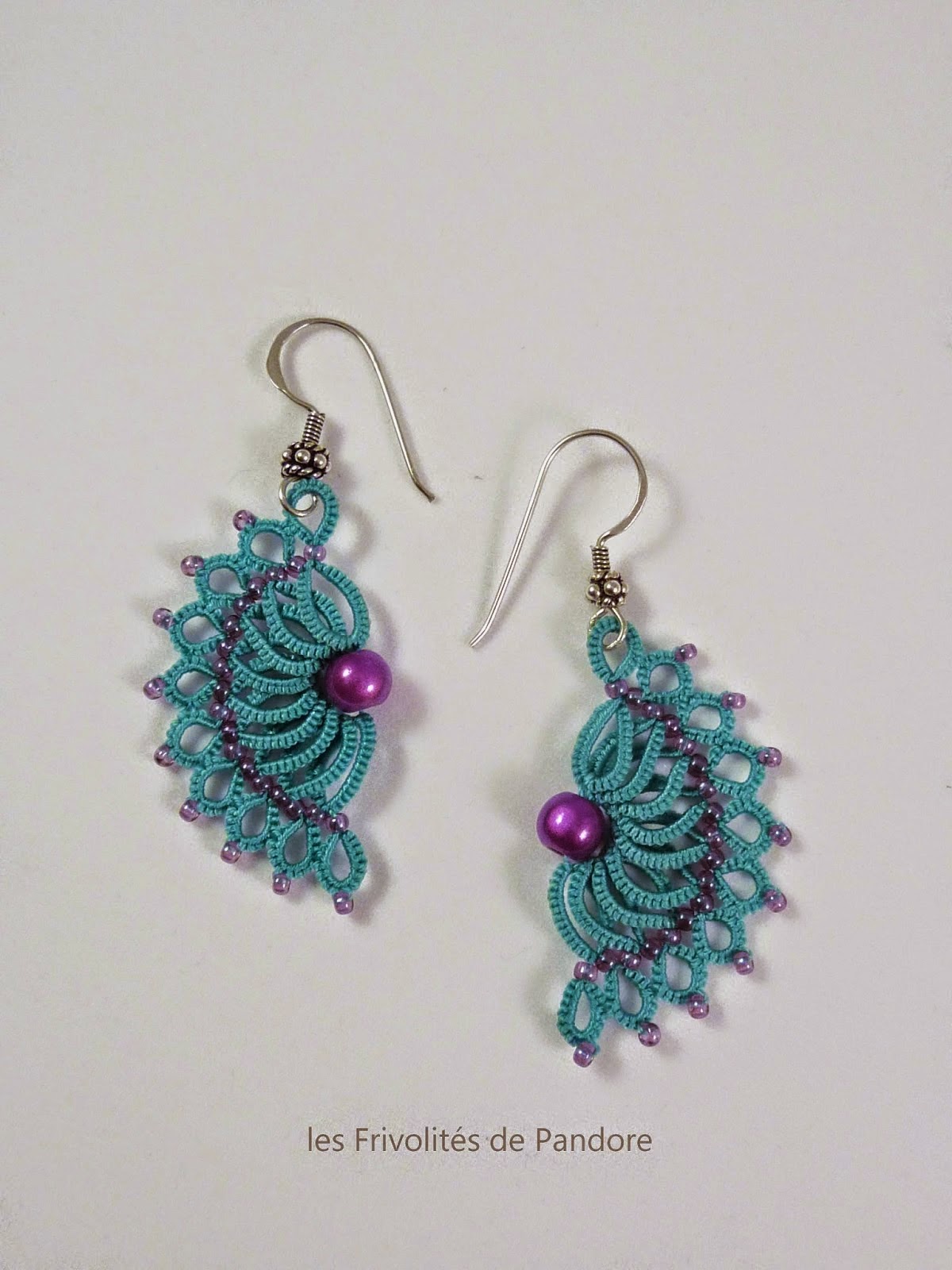 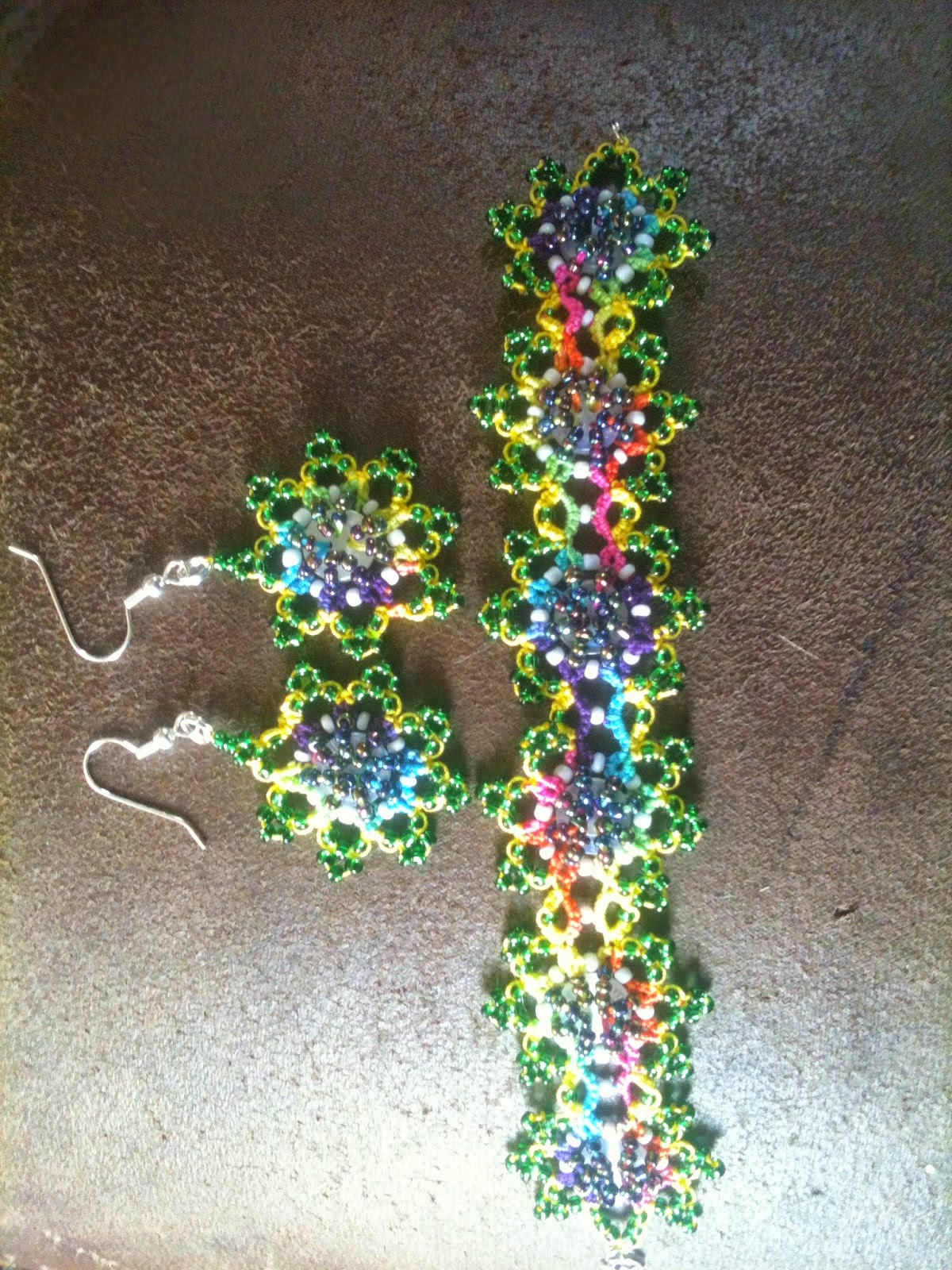 Lelia joined the Tollway Tatters and got to see Diane's masterpiece doily first hand. Renulek's doily that Diane was also working on also made an appearance. Froggers; or tatted doodles embellished with beads were fun to work on. Here are some of the samples they made. The patterns for these doodles are found in New Tatting by Tomoko Morimoto (flower) and on Grace Tan's blog (heart). All of Lelia's TIAS samples done in various colours. 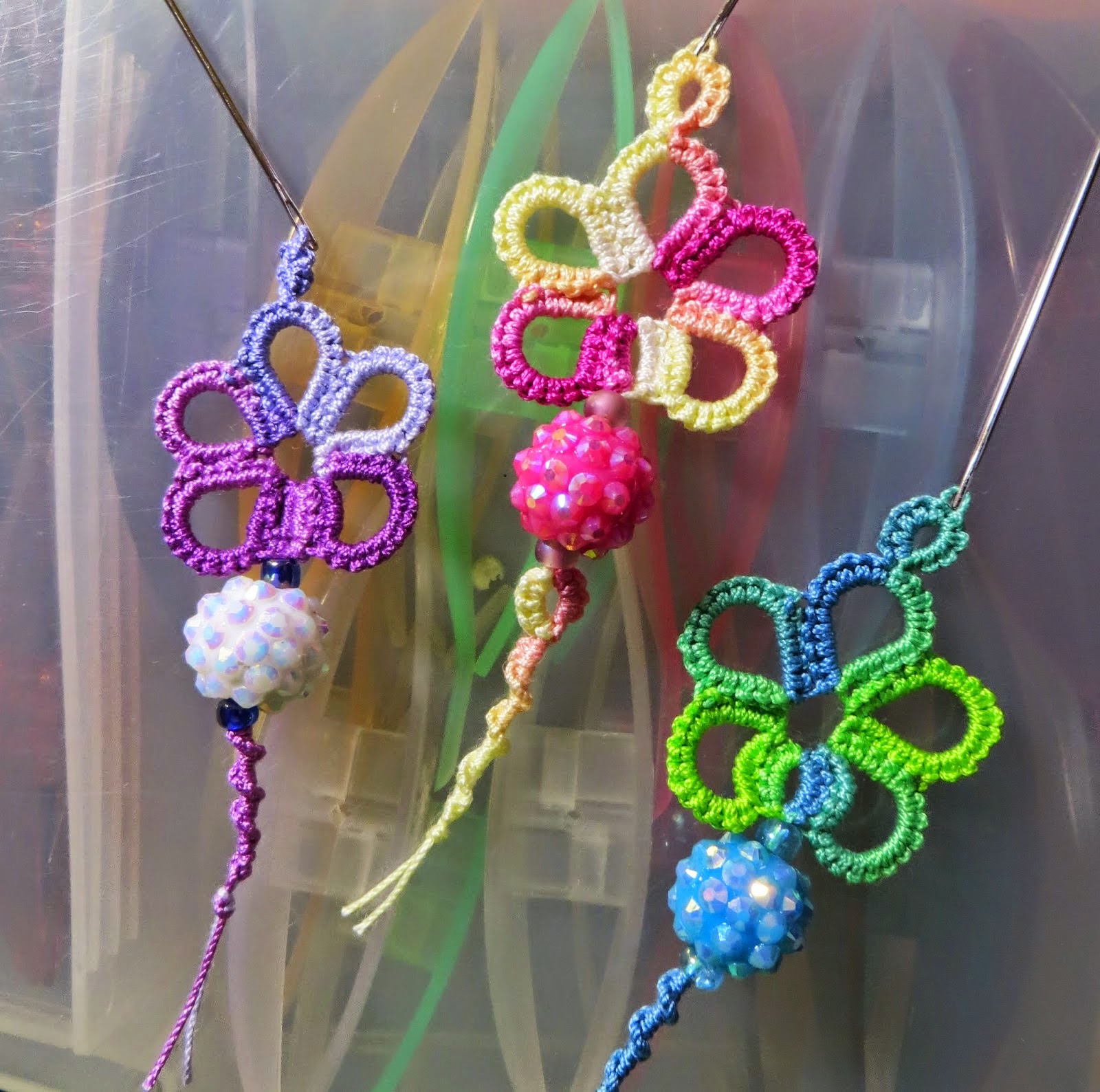 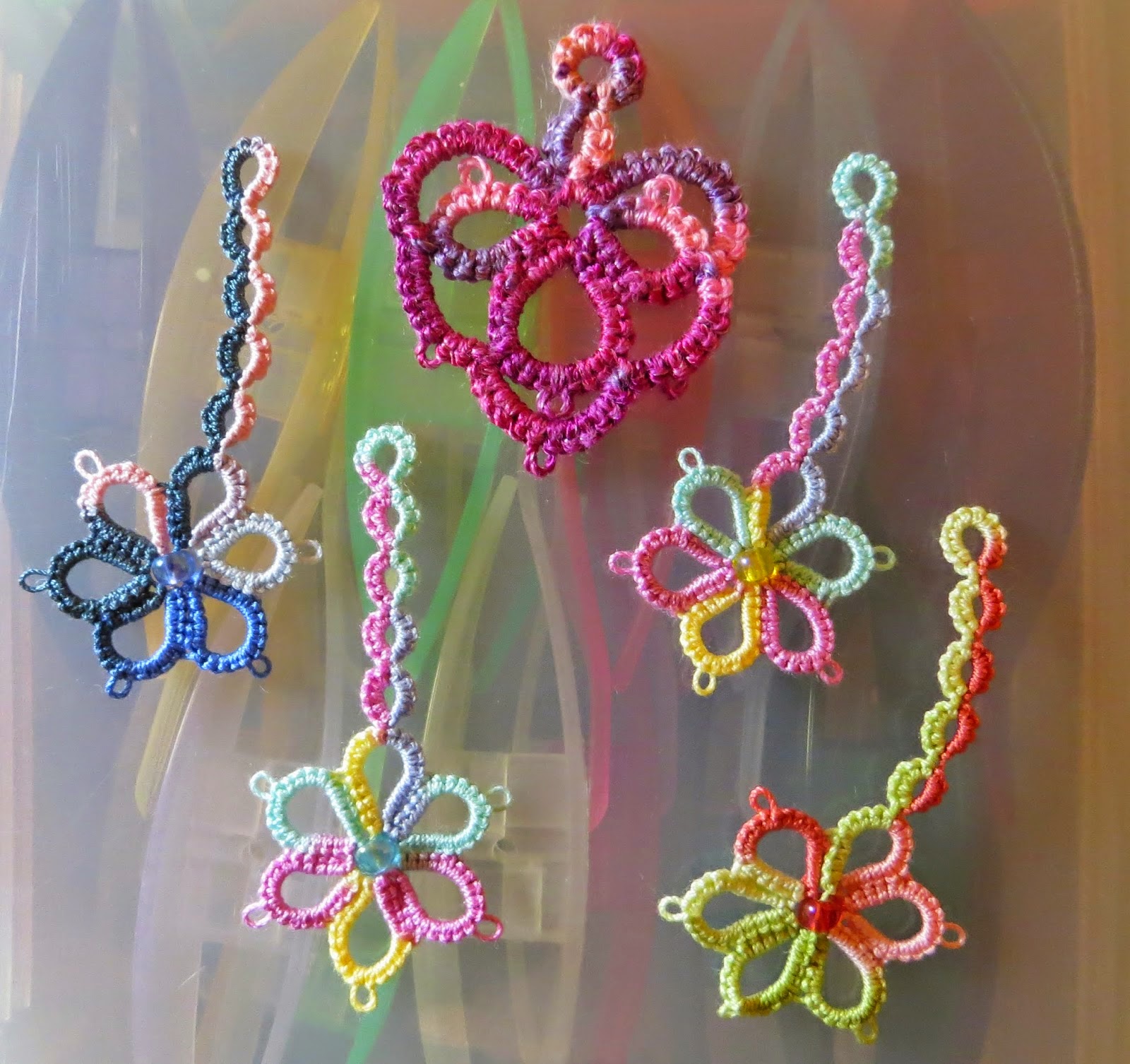 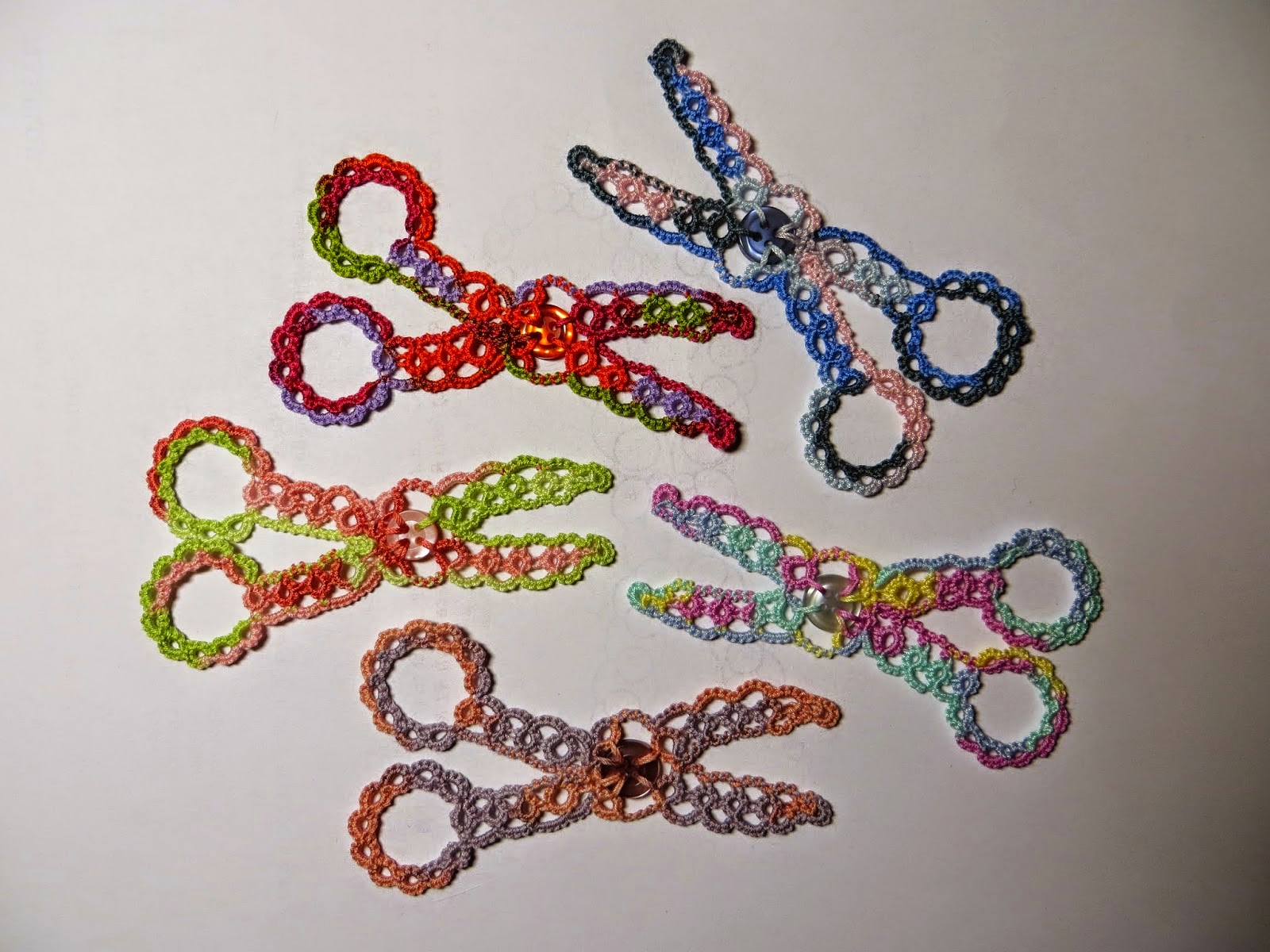 Cindy managed to untat a joined ring to fix a mistake, when she noticed another mistake that required snipping. I hate snipping. Every time the scissors come out it means hours of tatting in the garbage. All fixed and the row complete, but finishing one row a week is getting harder. 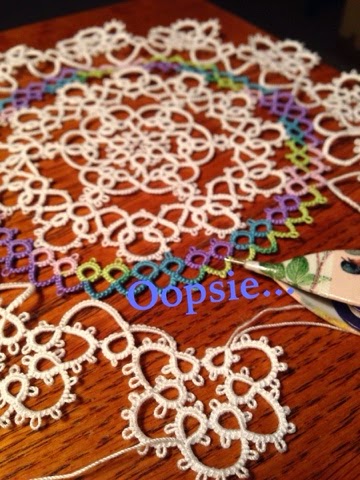 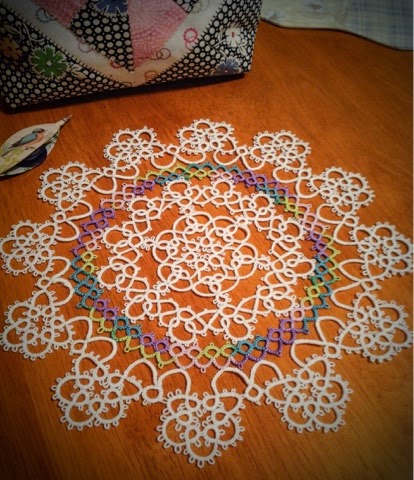 Diane has more repeats done on both her doilies. No school due to the extreme cold and Ta Da! the round on her large doily is done. First pattern repeat done with no mistakes. Progress on Renulek's tat-along is slow but steady. 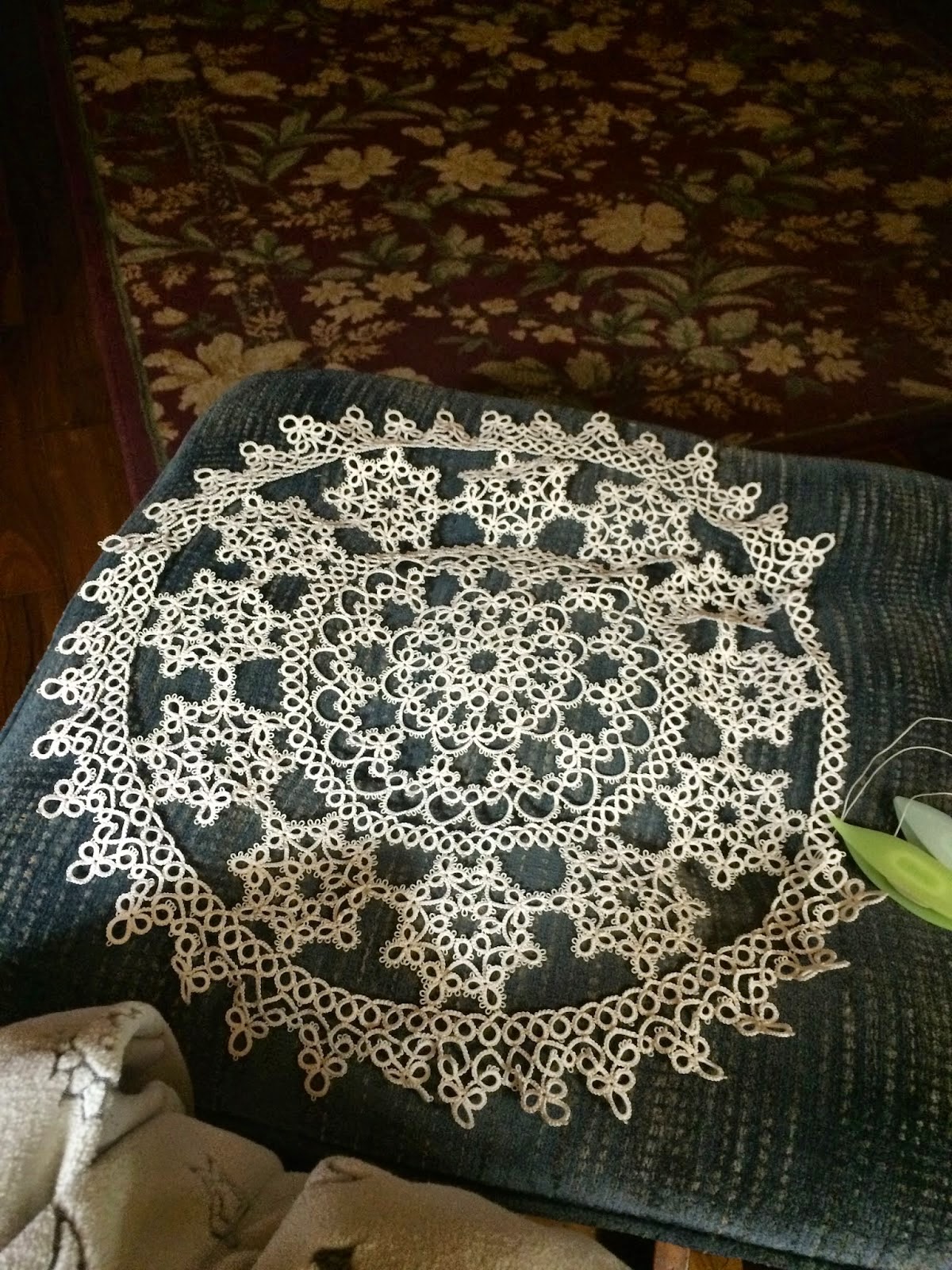 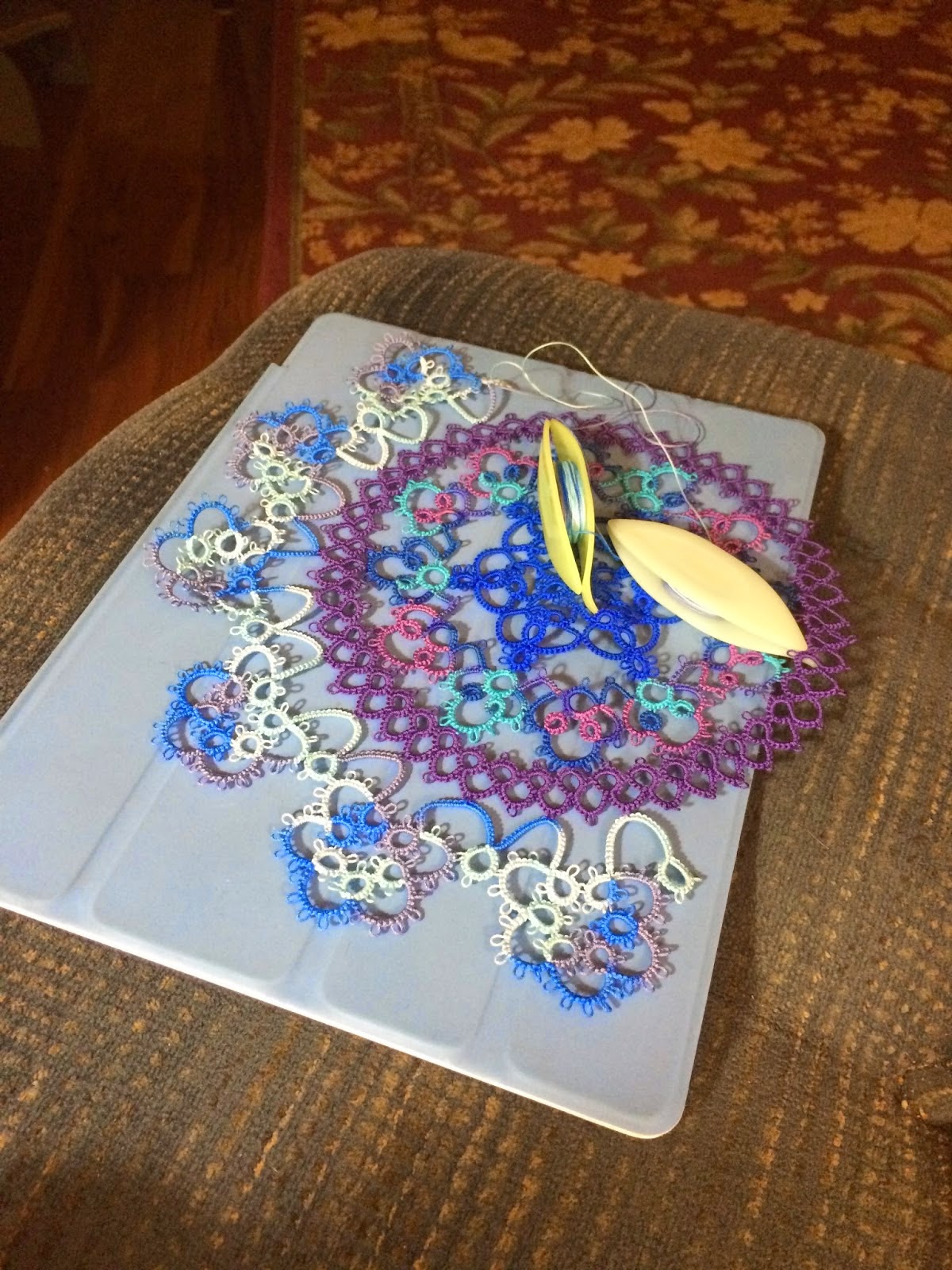 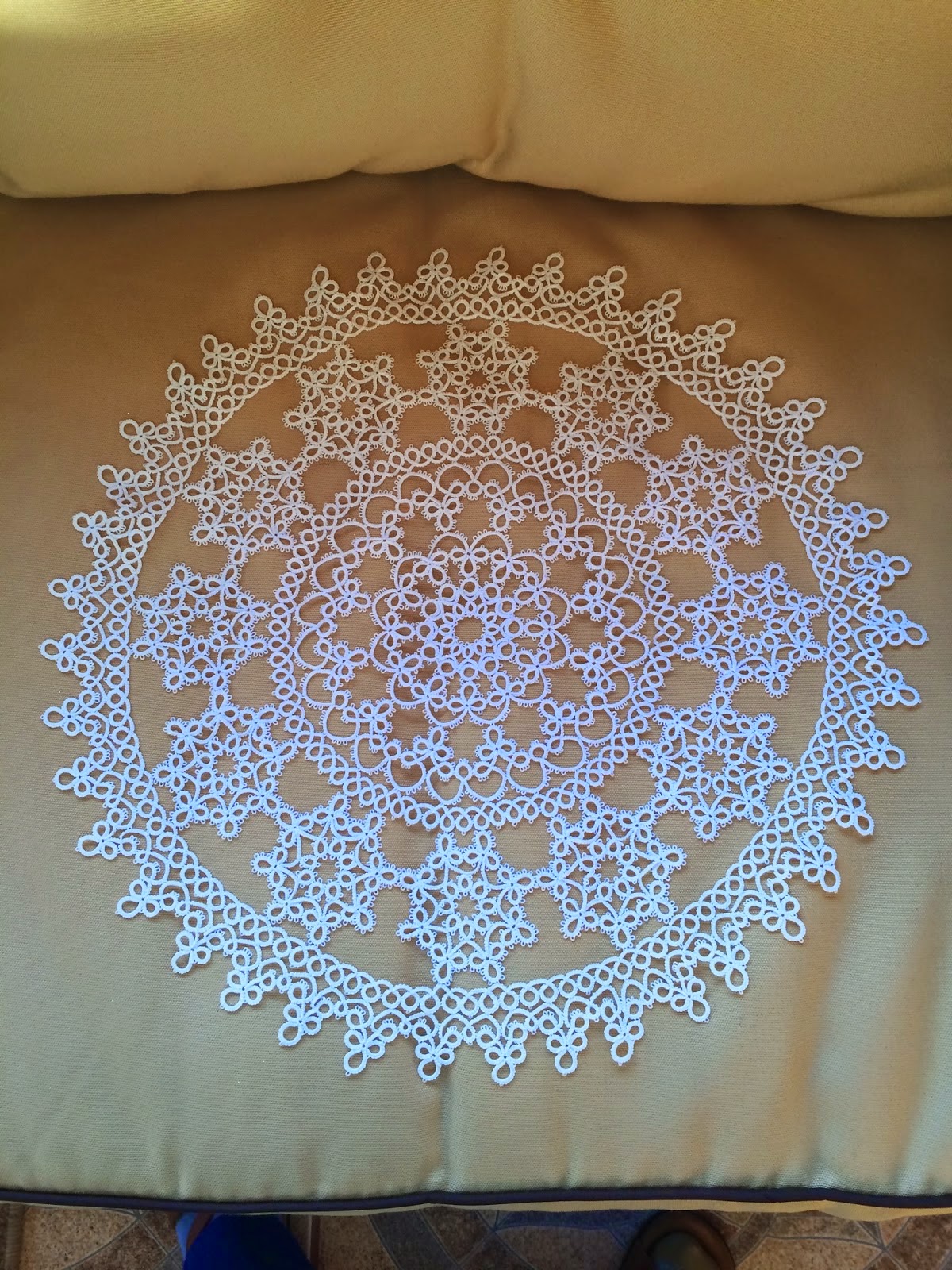 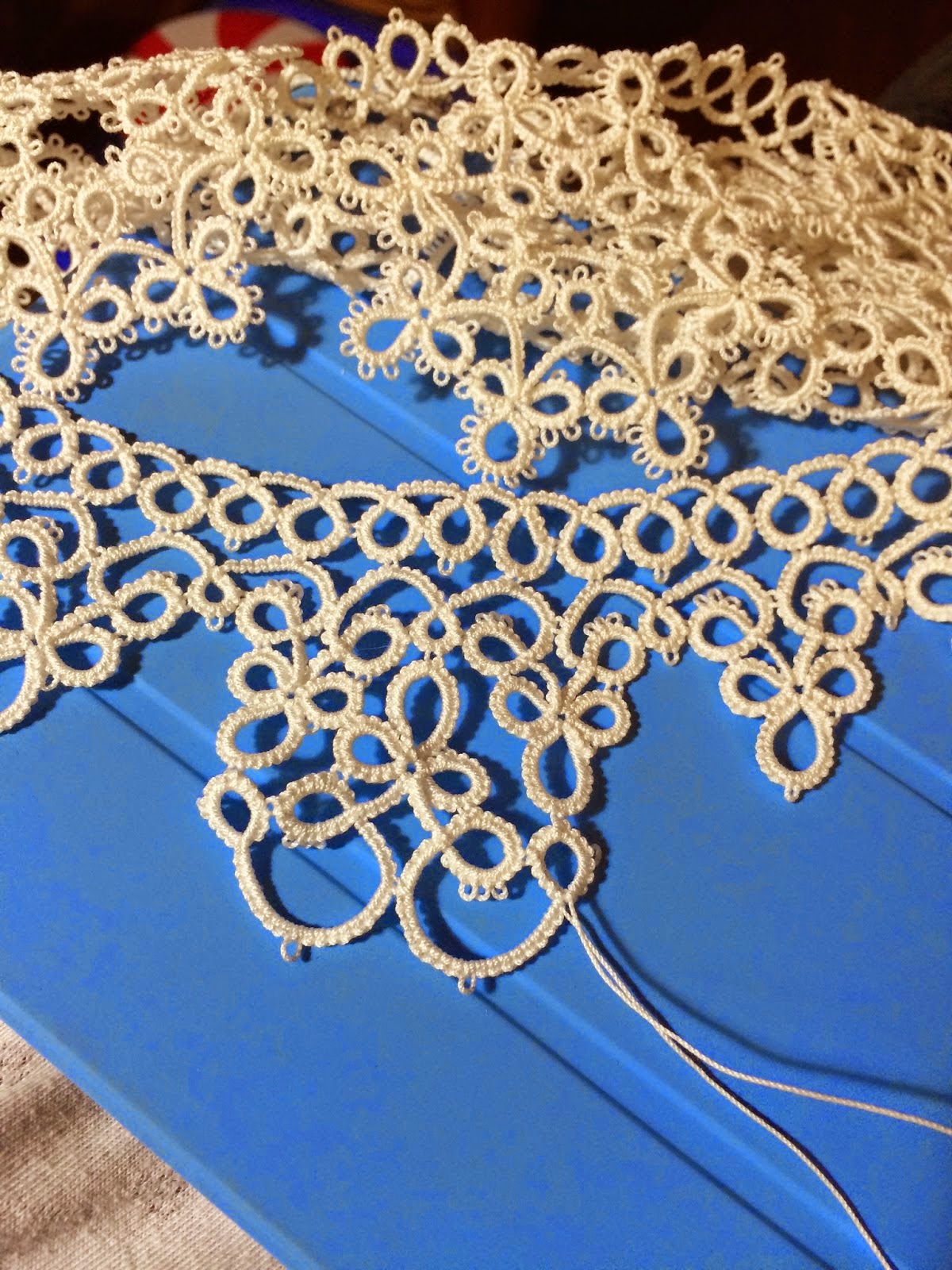 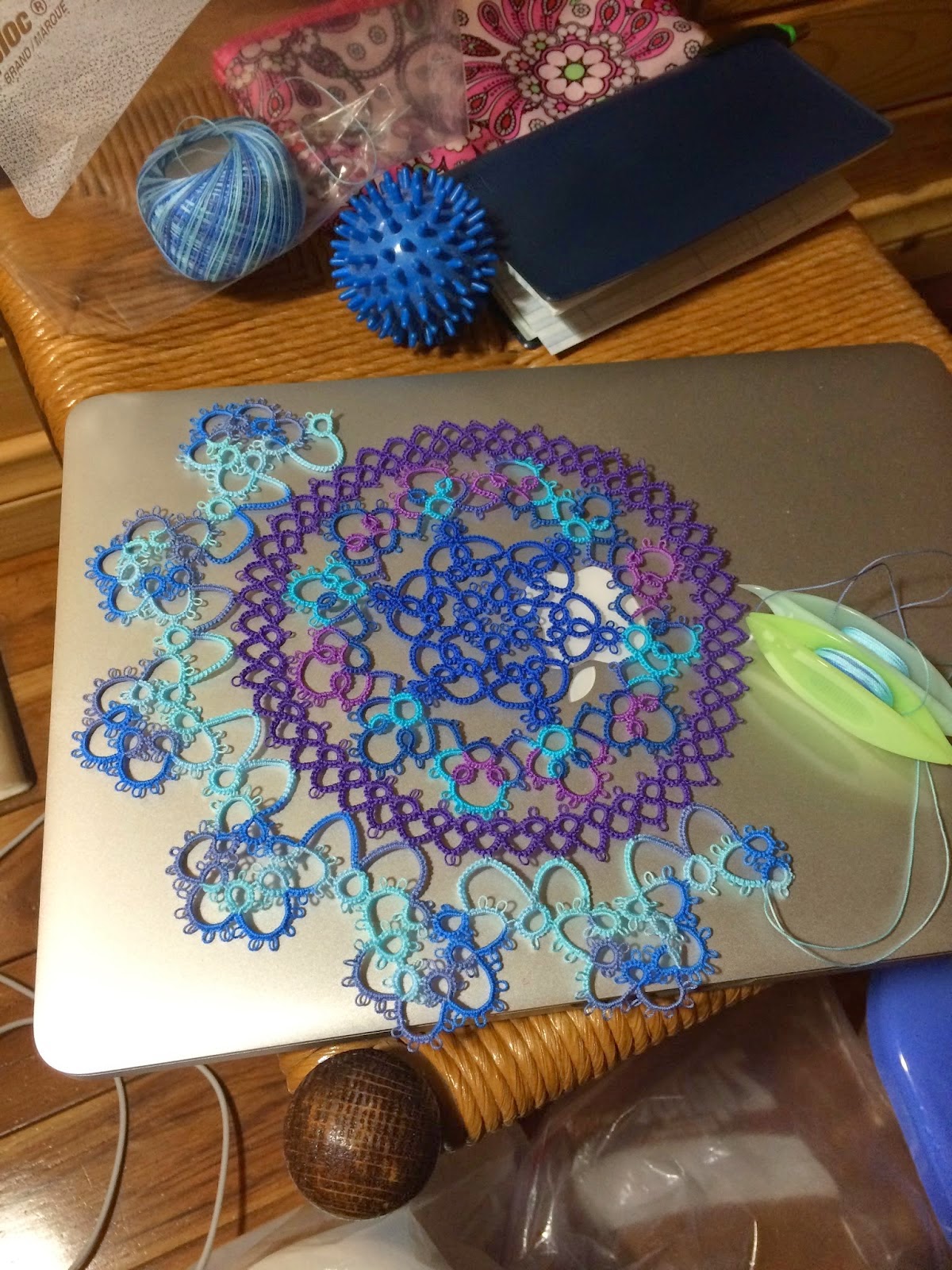 Fox modified an ear pick to use it as a picot gauge and it seemed to work reasonably well on size 40 thread, but might be too large for size 80. 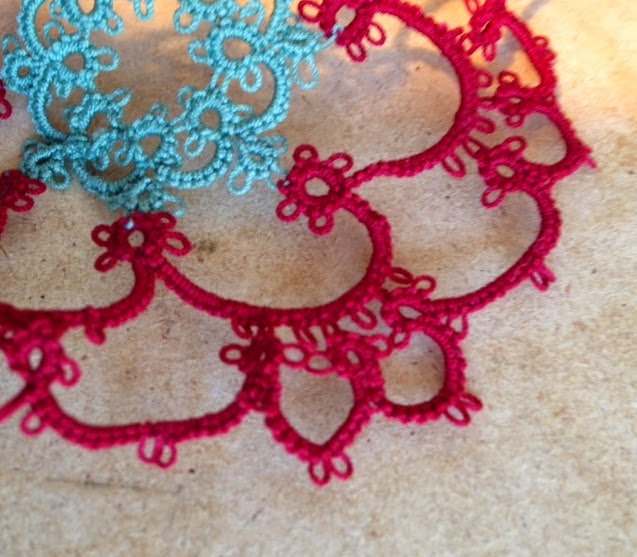 Marie has continued to tat snowflakes with pearls. This one, from the Japanese book Tatting 2 uses radial pearls. This design is from Jon Yusoff's Tatting with Rings. Another pearly snowflake from a pattern by Lean Bjorn. 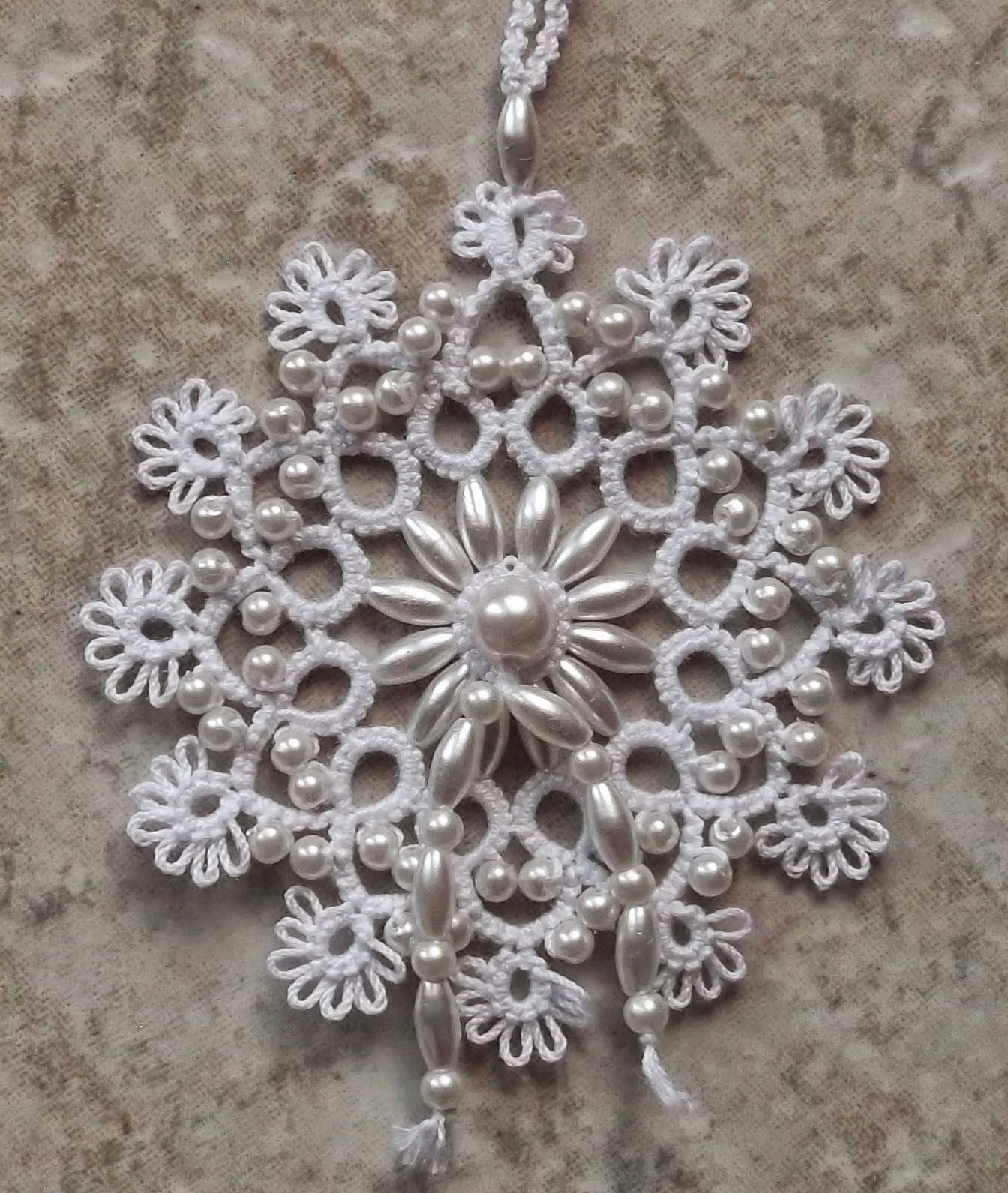 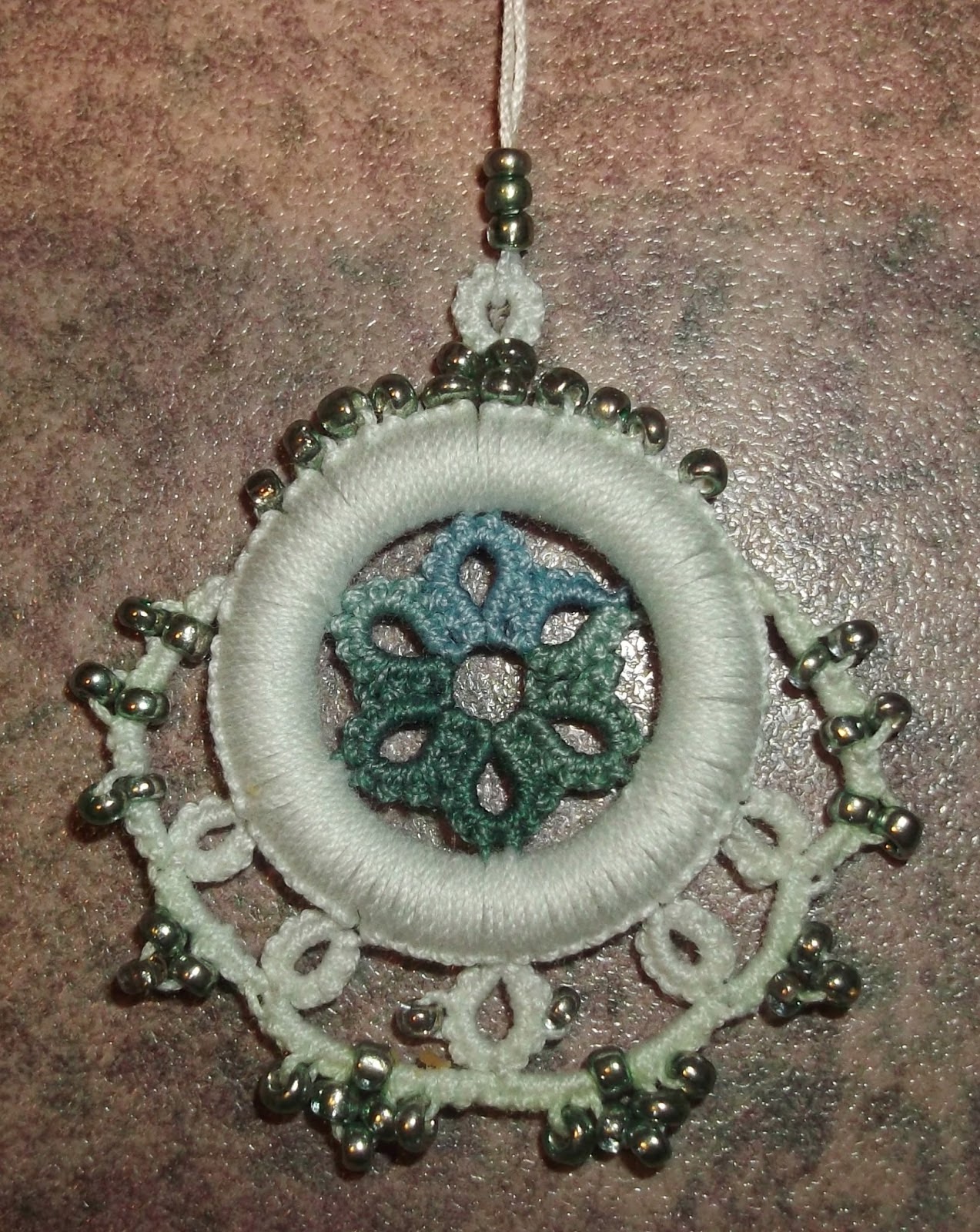 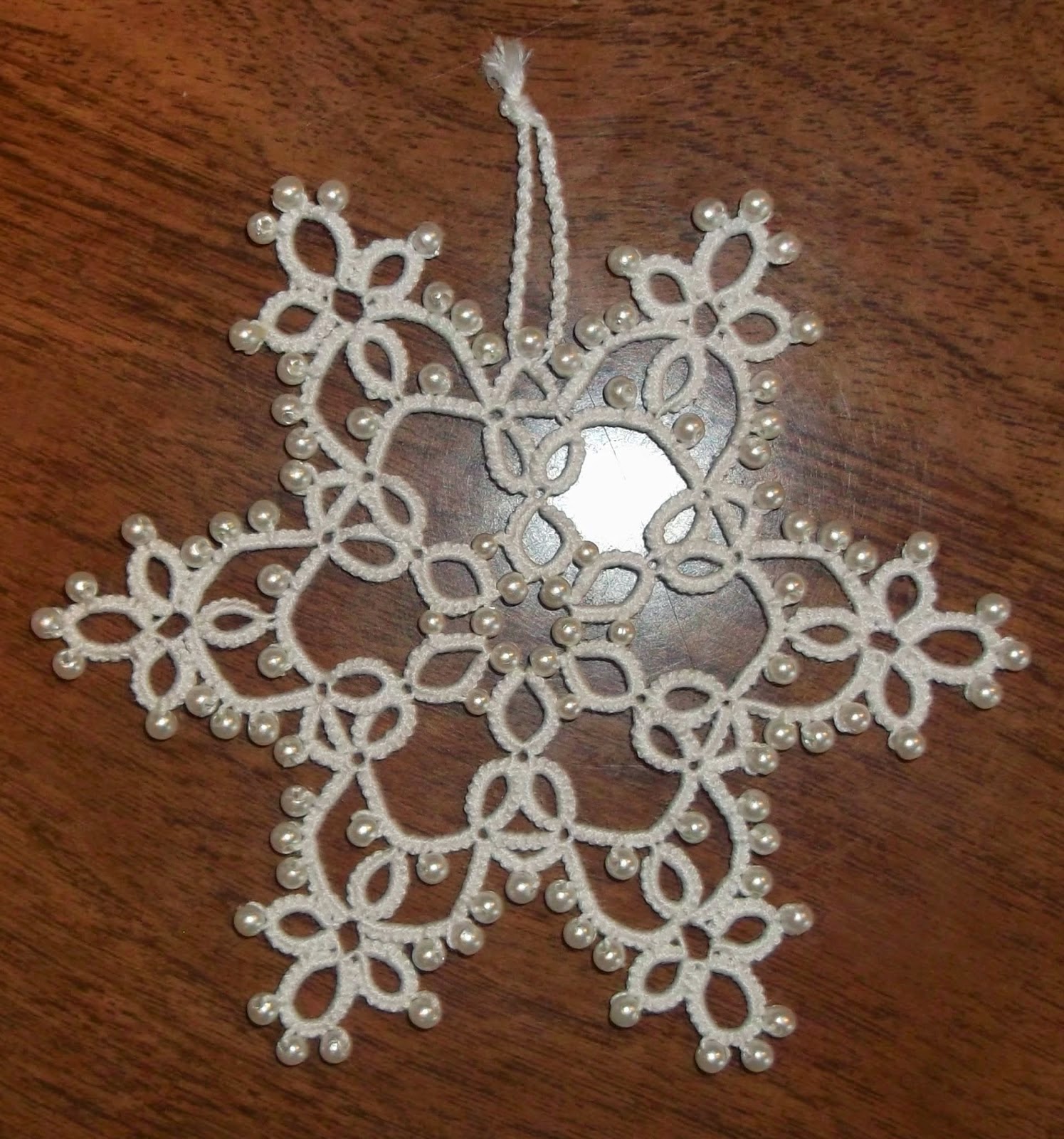 Muskaan has been trying out some new ideas. A two colour ring. A tiny turtle. If you mold it into shape it becomes 3D. She wanted a bullion effect on this vapour picot, but the thread didn't allow for the number of wraps she wanted. Single Shuttle Split Chain or Floating Chain made this free form doodle. 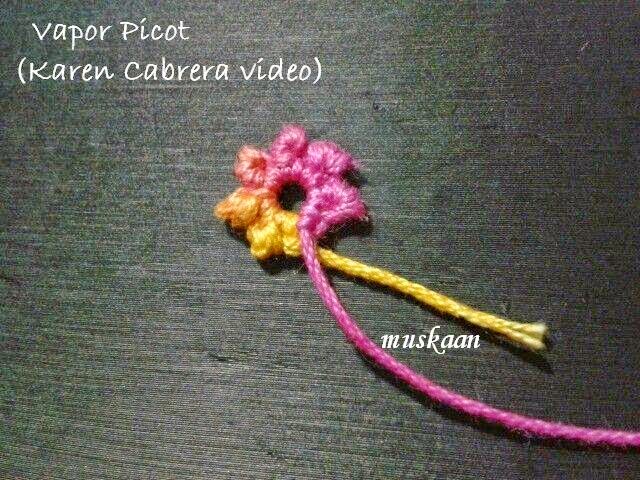 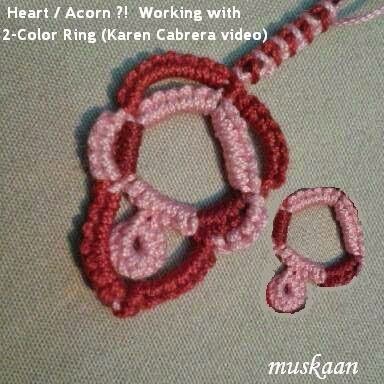 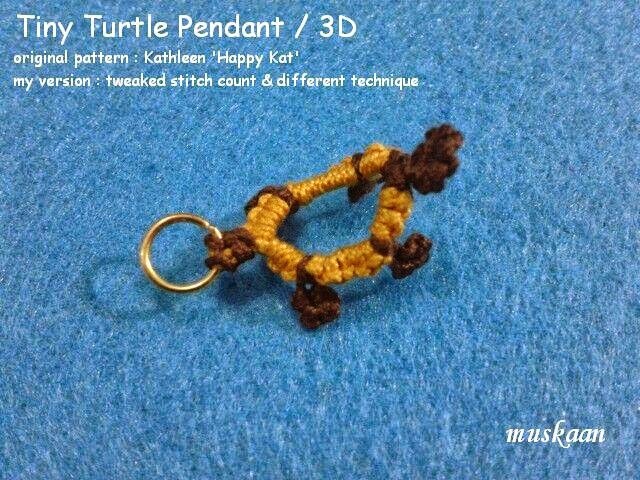 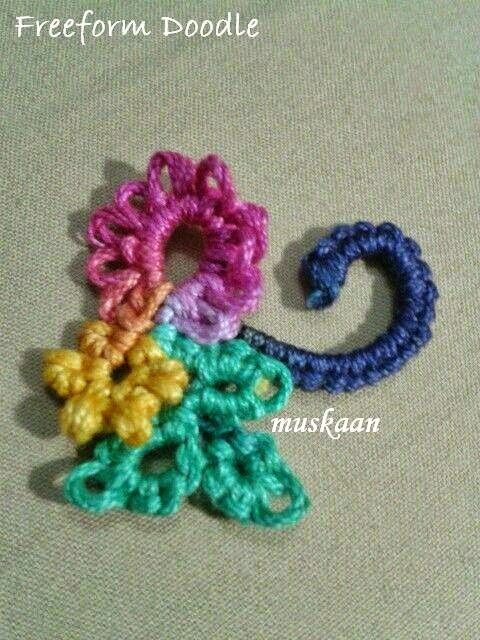 Stephanie made another sample edging with a classic tatted wheel. She sometimes use large thread (size 10, size 3) to make these wheels as coasters. This one was tatted with size 40 Lizbeth in Pink Parade.

HisKid was just tatting along when the thread broke. This is Tatted Roman Cross by Davina Marie Canale-Achen done in size 40 Lizbeth Purple Iris Fusion was made for her aunt. 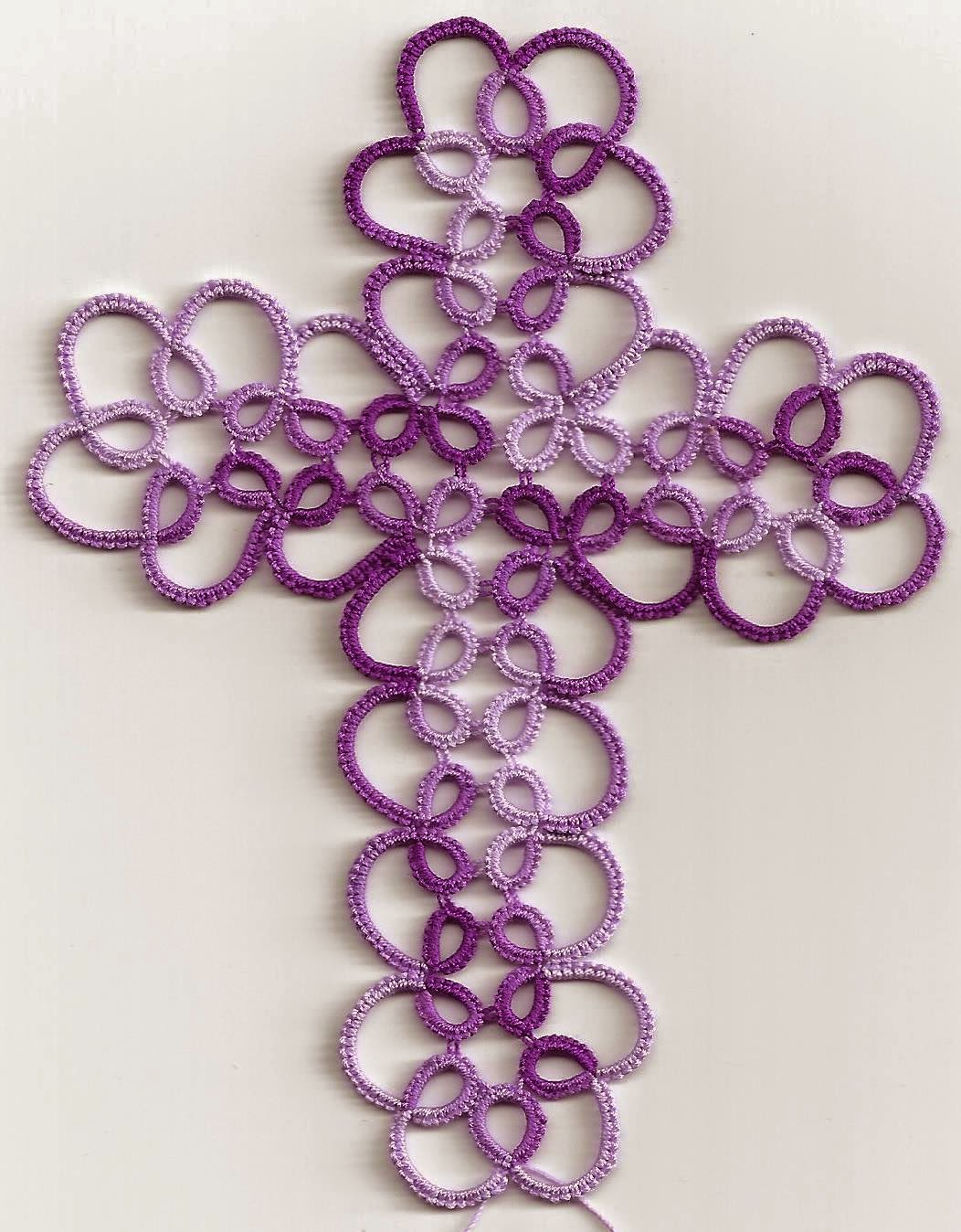 Hello!
I make lace jewelry for a long time, but I have only a little bit of earrings. I wish to join here and make 25 new different pairs of earrings. Probably I will make also many different things with lace, not for challenge.
Should I mark my challenge posts with earrings?
From when I participated in the challenge?
Best regards
LandOfLaces