Jenn test tatted the Dome Pendant pattern for Elaine P Gan and found it to be fun to tat and easy to follow.

Lilas loves picots, like this earring design. In preparation for the shop window of the Café Couture and a craft market she had to redo new copies of her models in tatting. These were taken in early morning light, lending them a bluish tinge. 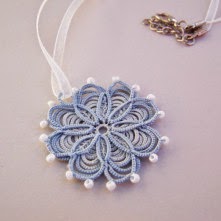 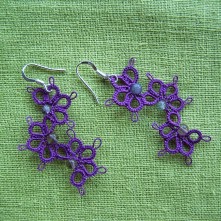 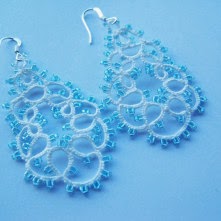 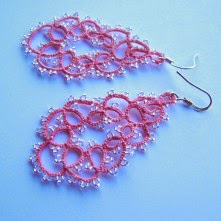 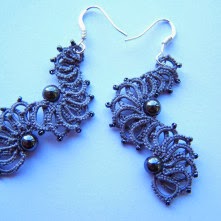 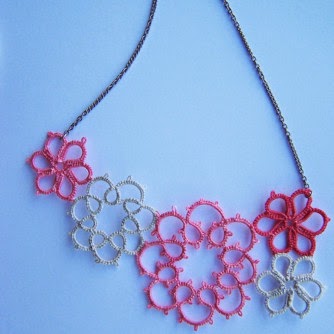 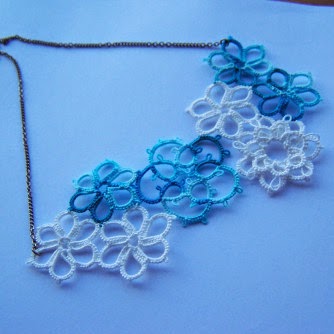 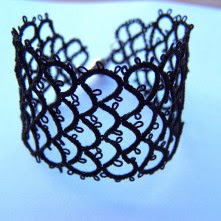 mb duke has been tatting snowflakes. This snowflake is a Jan Stawasz pattern done in Altin Basik 50 metallic gold, but it doesn't have enough negative space to make a stand alone snowflake. This next one is a design by Robin Perfetti called First Snowfall done in Finca Perle Cotton # 12 in colour #8728 which is a silvery/gray color and she plans to do it again in a larger thread. Another beautiful pattern by Robin Perfetti is called Design Tutorial Snowflake, which she thinks might be her favourite. It's written in 2 rounds which is great if you're using 2 colours, but working in one colour, using split rings let her do it in one. Her last snowflake is a design by Renulek with onion rings in the centre that took her a little while to figure out. 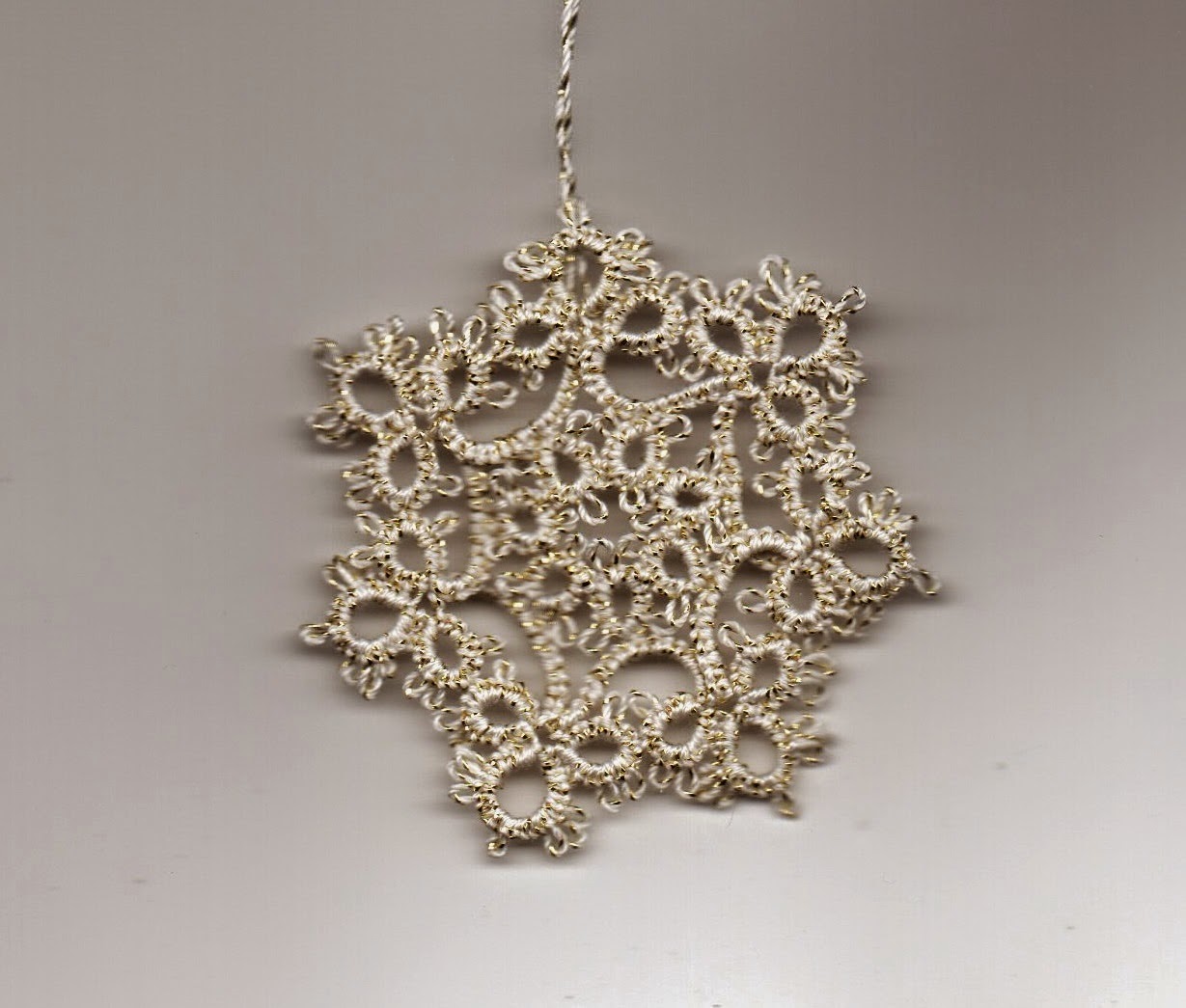 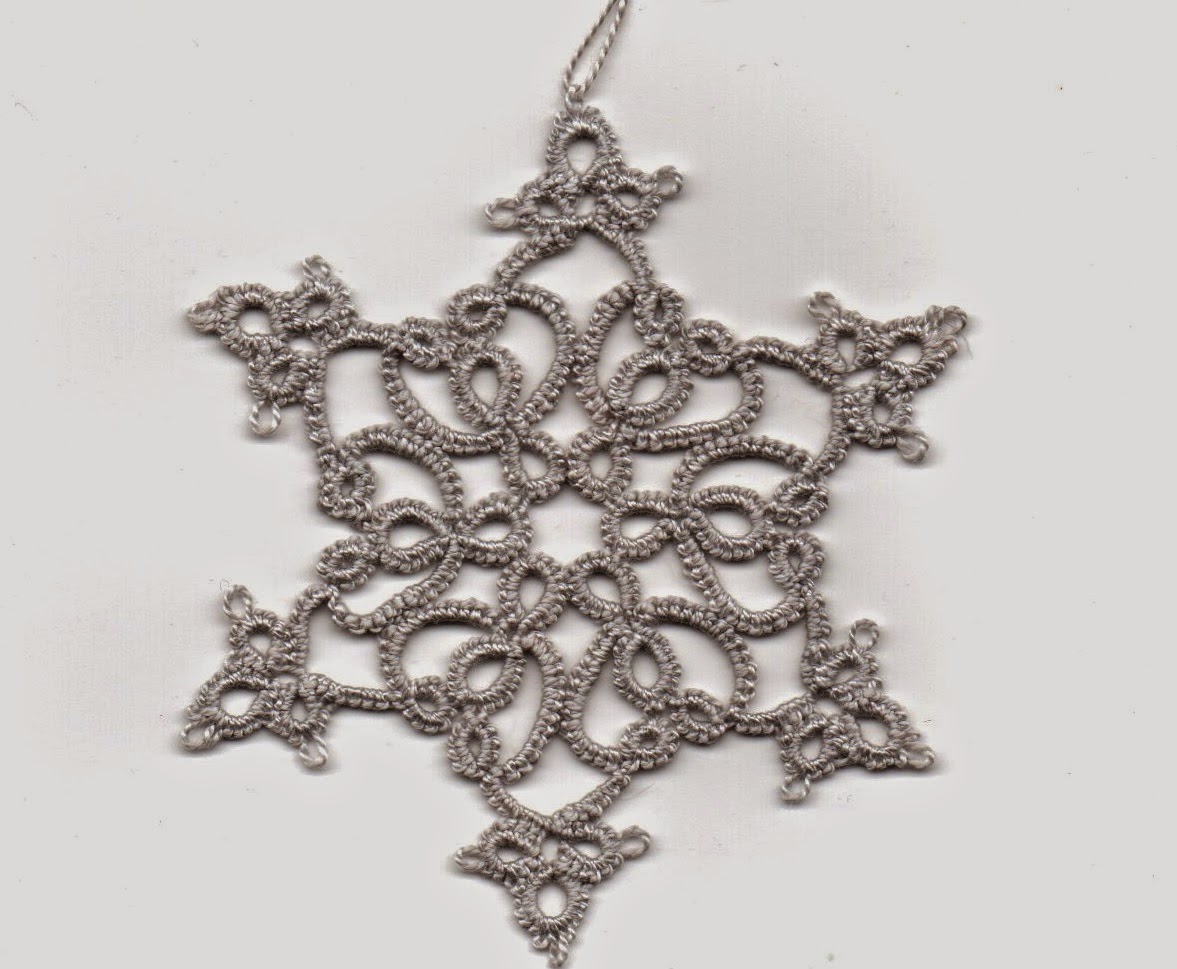 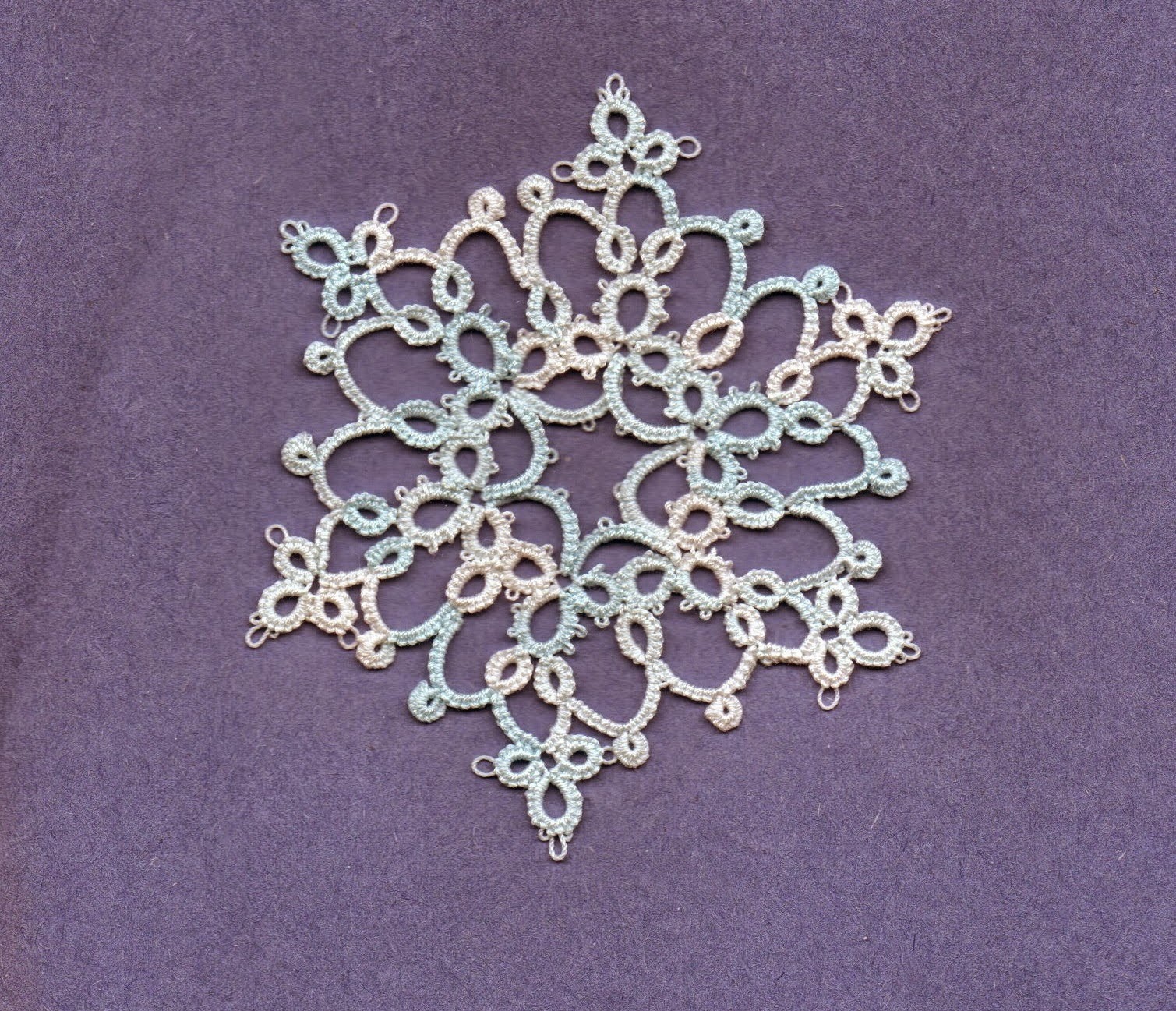 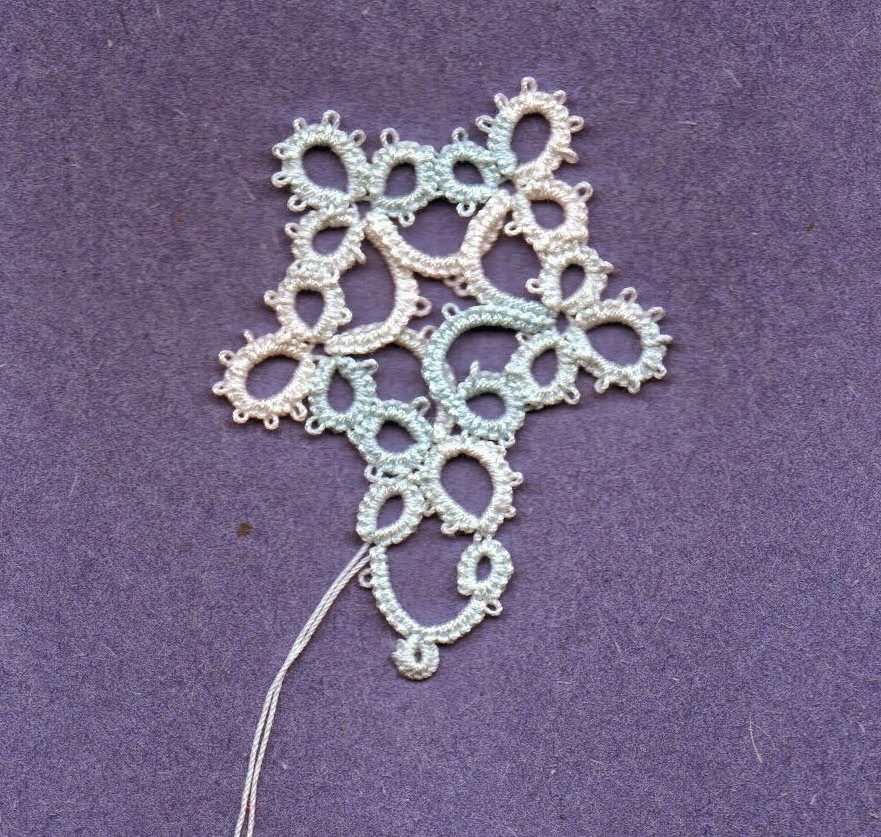 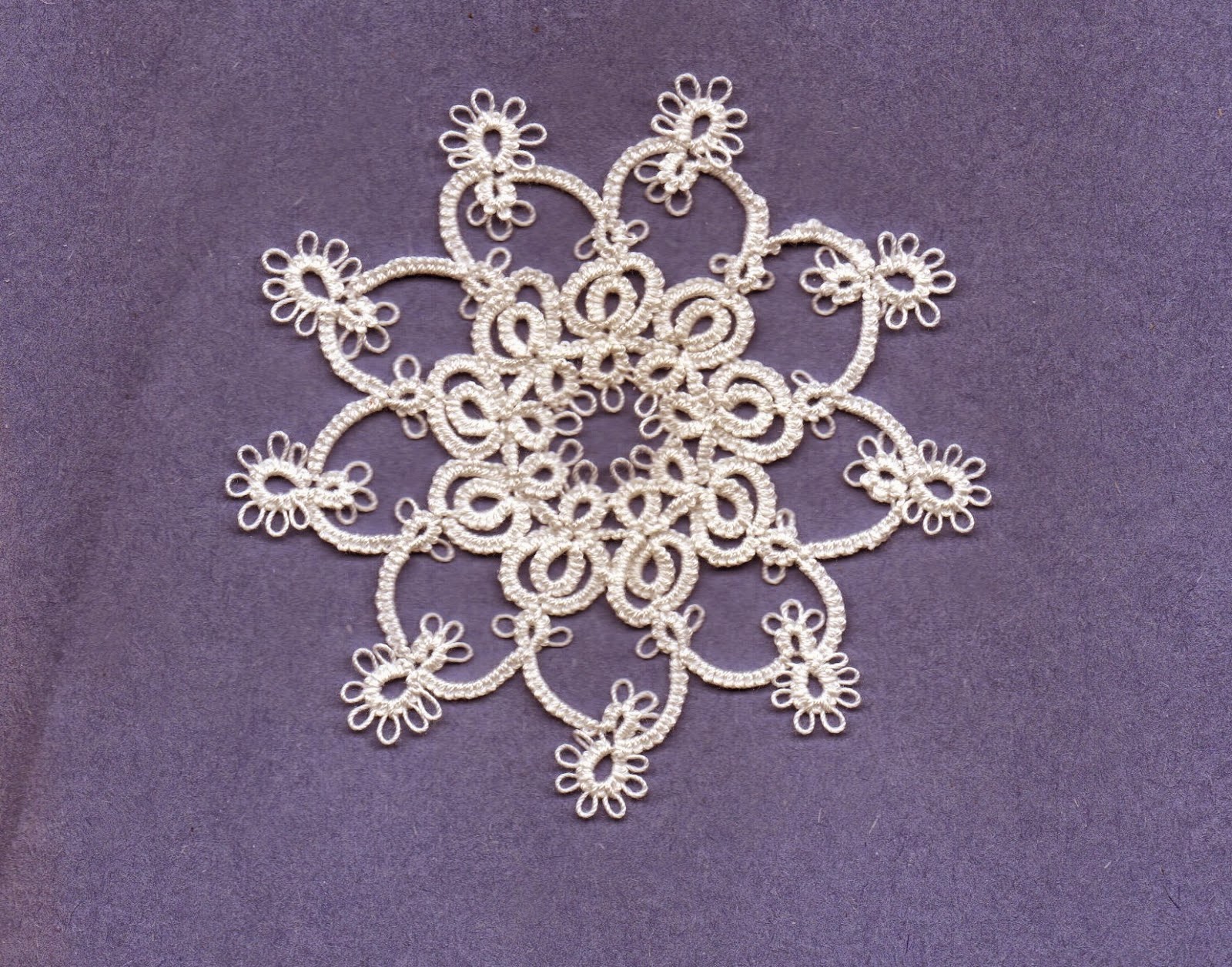 Cindy is in the mood for tatting smaller projects right now like this Josephine Ring Medallion done in Lizbeth #154 Wildflower Garden size 20 thread. 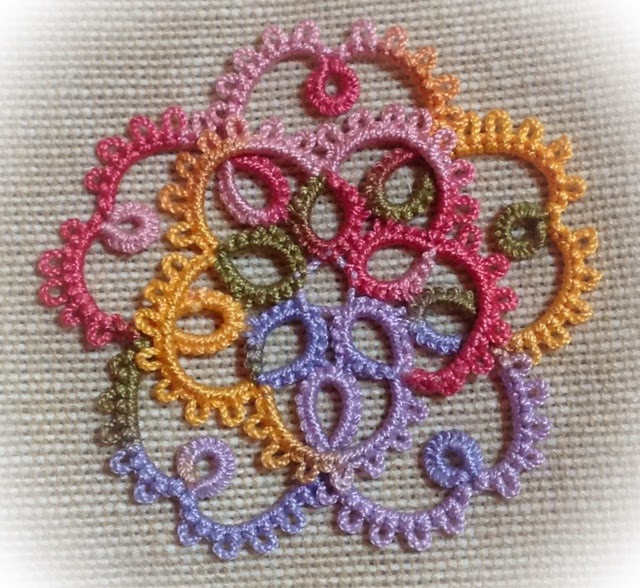 Fox has started row 10 of the monster doily and it's going to be a long, long row. Here it is at the half way mark. As she starts row 11, the doily measures 16 inches across. 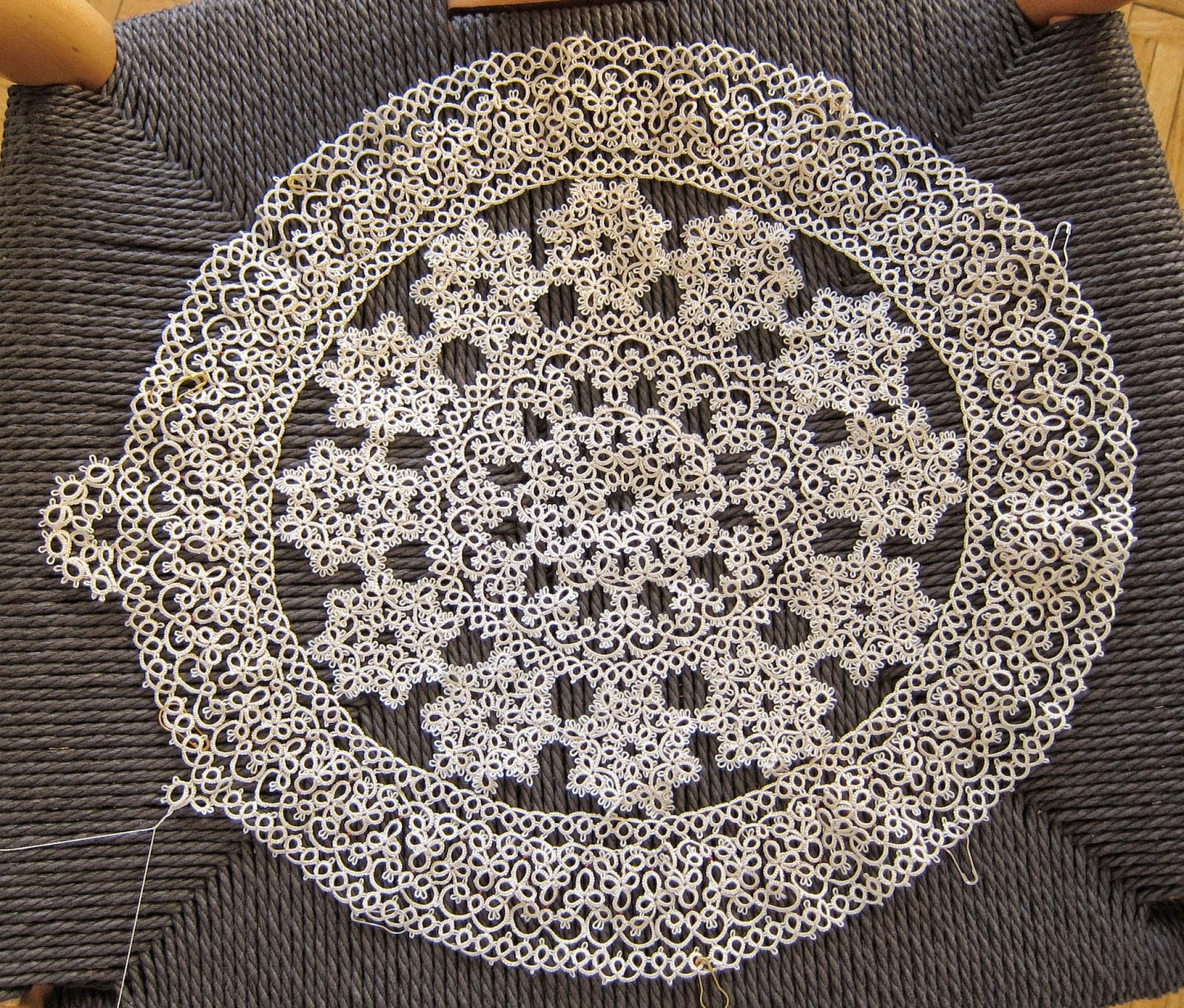 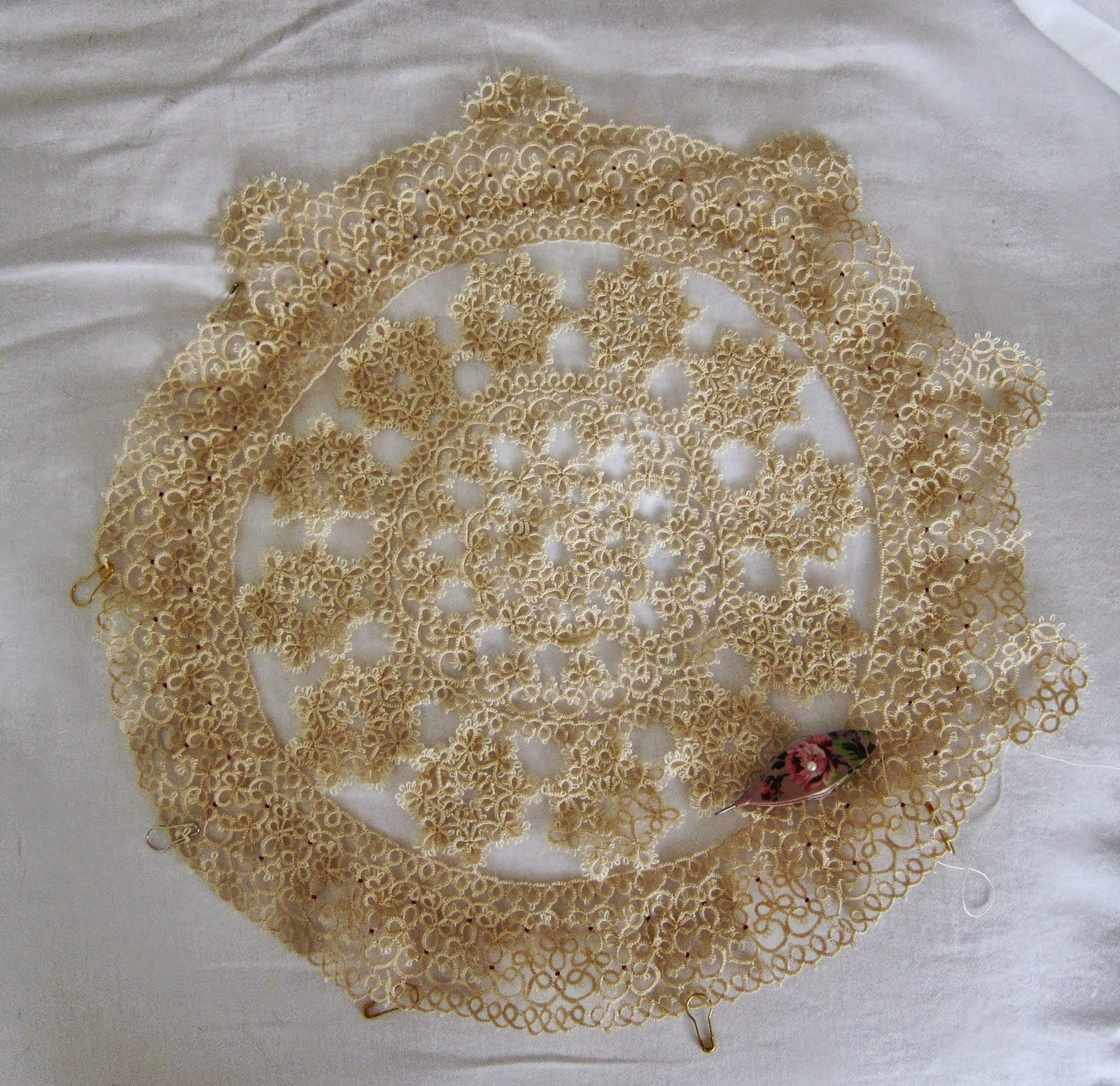 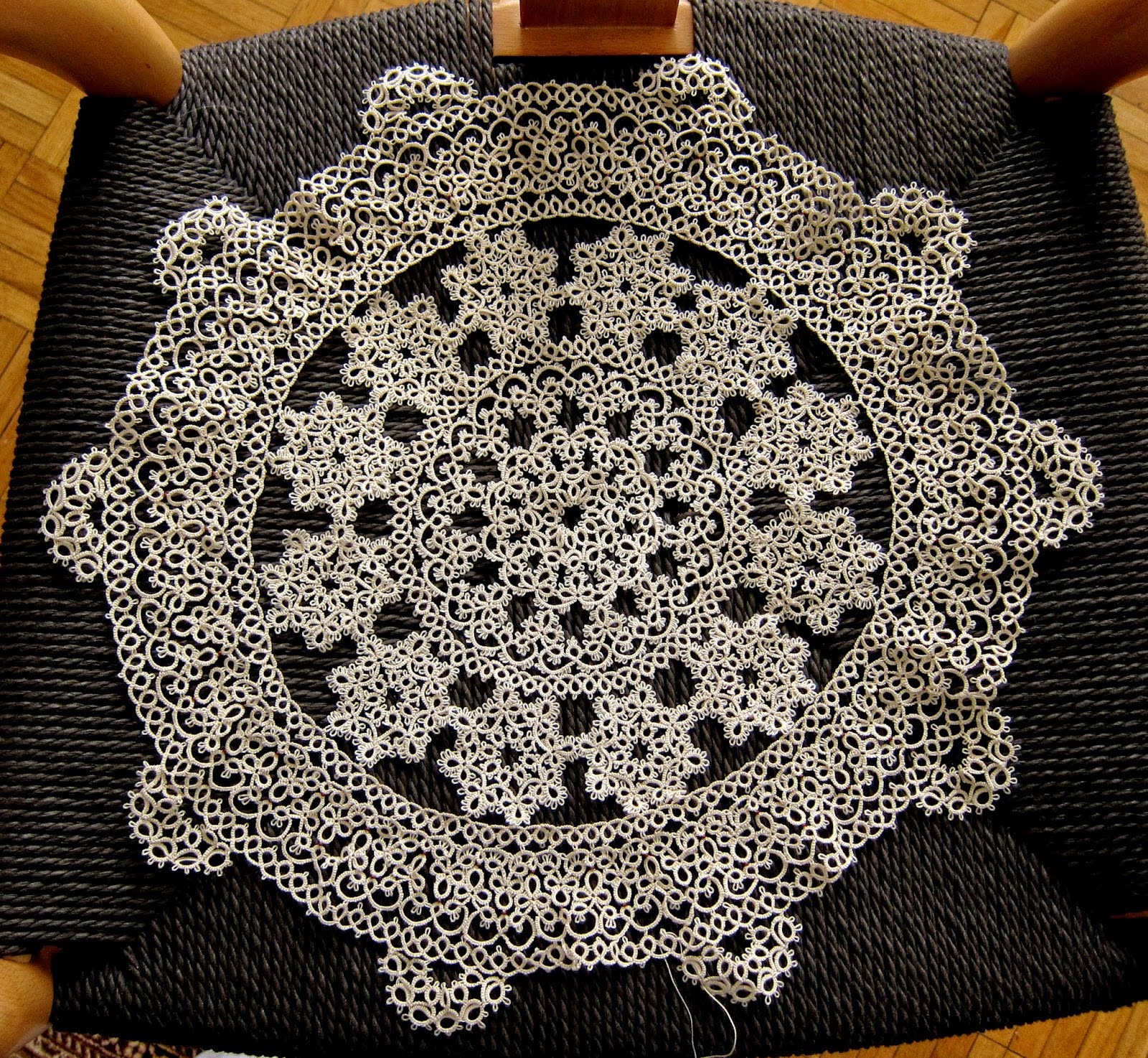 Margaret tatted this beautiful snowflake by Robin Perfetti called Design Tutorial Snowflake in Lizbeth white thread inside and Ice Blue on the outside. She plans to make more of these next time blue in the middle and white on the outside. 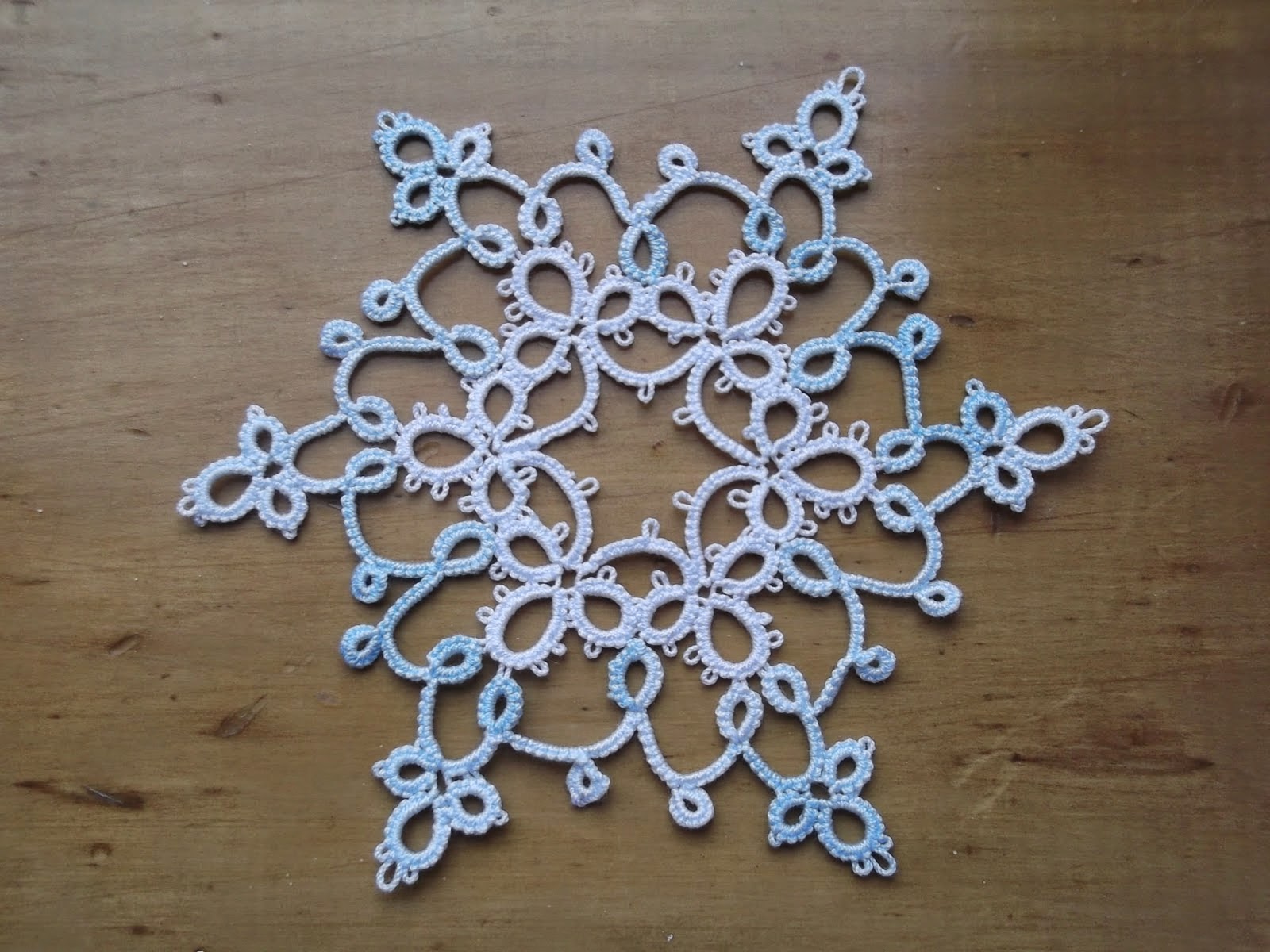 Marie has some new displays for her tatting with the top picture showing her pendants and brooches, while the bottom one is holding her earrings.

Martha has posted pictures of some of the interesting things at Palmetto Tat Days. Notice the clever clock in the teapot on one of the quilts and Georgia's picture inside another teapot. Lots of spectacular tatting was on display. A vintage tatted tablecloth was raffled off to a deserving home. Of course some of the fun was just plain silliness that you had to be there to appreciate. 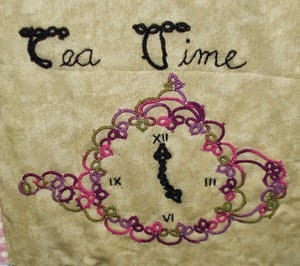 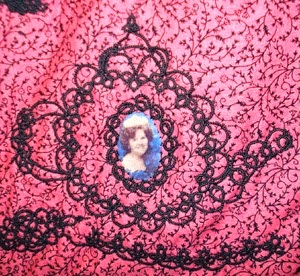 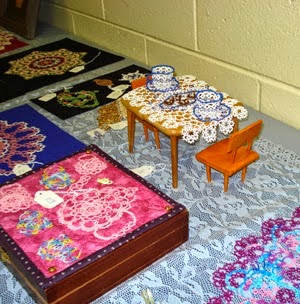 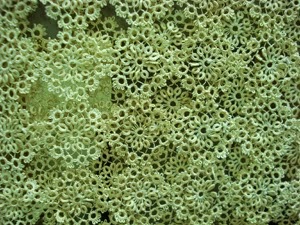 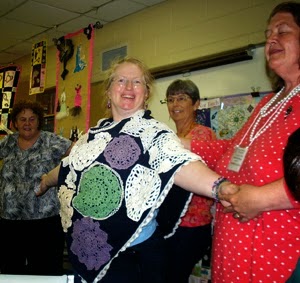 Mica tatted Jon 's Oasis snowflake in Lizbeth size 40 in black, although she did it in 2 rounds to avoid using an SCMR which she thinks never looks as good as the real thing. 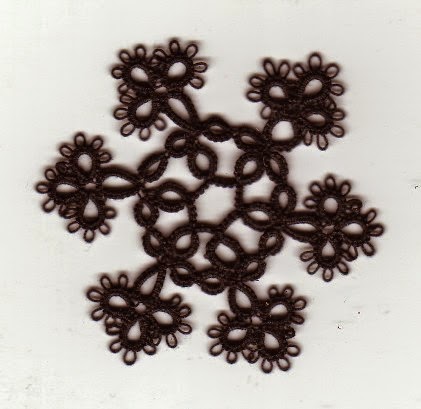 Sue test tatted another wonderful pattern for Elaine P. Gan, the Justification Cross.  worked in Lizbeth size 40 Sky Blue Med. She added a tatted edging to this plaque, in what she thinks is size 40 Lizbeth Autumn Spice and has decided to leave it unblocked as it more resembles a vine that way.

Wanda tried her dragon in four different frames before she settled on this one which isn't too dark or too bright for the tatting and it doesn't leave the dragon lost in a too-big frame, either. 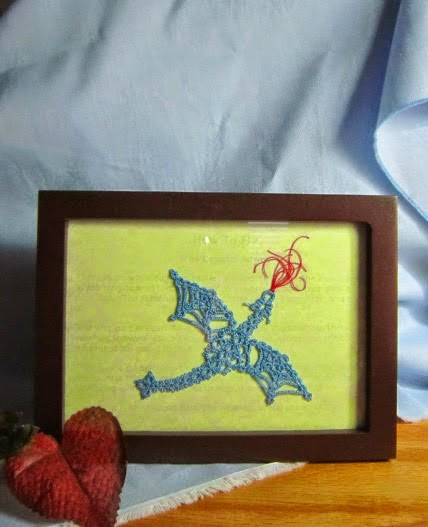