Sharon was delighted with the instructions on making interlocking rings from Sue's blog and had to give it a try with wonderful results. 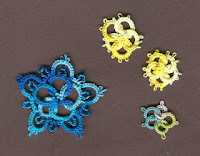 Jane found that interlocking rings are nice but interlocking SCMRs are nicer because you can throw rings off them. Hyperbolic tatting may thrill a mathematician, but Jane just loves the look. Add lots and lots of beads for a carnation effect. A hyperbolic chain, with beads added to the final row make delightful Sea Wave earrings. The thread is Cebelia 20 that she dyed herself. Tatilicious Rainbow size 40 HDT make wonderfully colourful earrings. 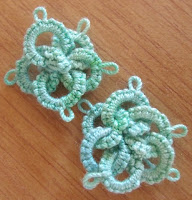 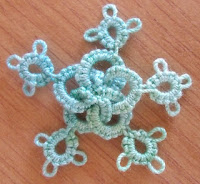 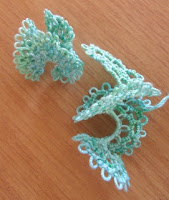 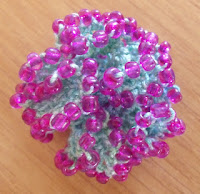 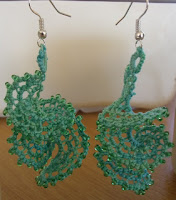 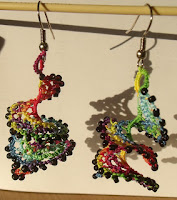 Ginny is back from the tatting workshop where there were tatters, treasures and tables full of goodies. 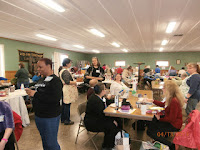 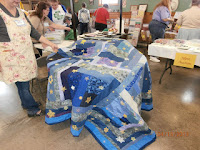 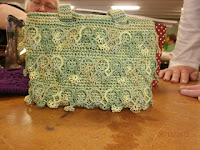 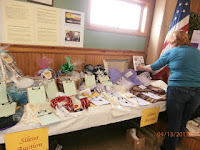 Kristen confesses that as a needle tatter she doesn't like ring only tatting because it means constantly adding in new thread, or constantly fighting a long strand of thread that keeps twisting and knotting. "The Big Doily" is at a huge round of ring only tatting and if she were a shuttle tatter, she could at least have the satisfaction of flinging her shuttle across the room in frustration. As hateful as it is, the finished row looks gorgeous in the doily. The next round is a row of motifs, so she's been doing some test tatting in giant size thread.  The centre is supposed to join to all of the inner picots. Correctly done the chains are joined to all of the inner picots with a space between them. This fun triangular motif from Cathy Bryant is simply named "Tatting". and the thread is very colourful after the more subdued tones she's been working with. 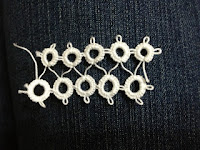 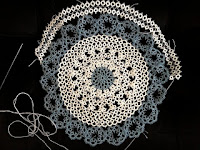 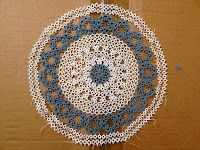 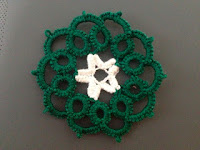 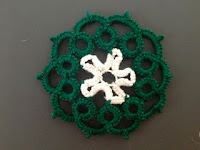 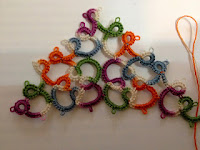 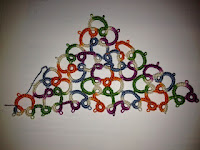 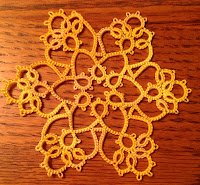 Diane is the lucky recipient of an enchanting 3D tatted grandfather clock created by Battatter. She finished Round VI from Tatted Treasures by Jan Stawasz, which she did in size 20 Lizbeth #168, Latte Foam. She received a wonderful package from Jane which held a beautiful Celtic bookmark, a tatted shuttle bag, and knitted fingerless gloves. She finished the tatting edged hanky for her niece.

Fox continues to work on the Honey Napkin and her colour choice for the upcoming rows may be a bit of a challenge. Her success with the Iris Niebach pattern may have been a bit premature, but she did finally complete it. Done in Olympus size 40 thread in a lovely turquoise. (I agree with Fox, it's a beautiful colour) 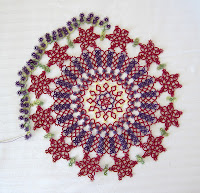 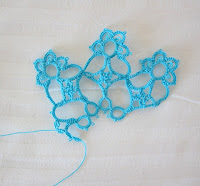 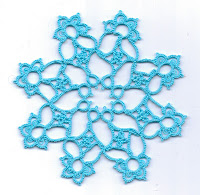 IsDihara has been trying to create a 3D Stargazer lily using a petal pattern by Linda Davis. Her second petal on the left had beads added. She needs six petals for her flower and she has 3 done.

Jess did a miscount while working on Debbie Arnold's square doily that will require surgery to fix. On another variation of the doily she has the centre. She has an outer section. She has a hole in the middle with plans to do the ringed row separately and then attach them with the chains that go between.

Marie continues to increase her flock of dragons with this one done in Lizbeth size 20 black, size 80 purple, and Kreinik glow in the dark grape in size 4 which she has named Fire-Fly dragon. Lizbeth, size 20 Victorian red, glow in the dark sewing thread and Kreinik, size 4, lime were used for her Rare Holly dragon. These lantern earrings are a pattern from Sook Yi with an added bead in the middle and done in Lizbeth, size 20, azalea medium. 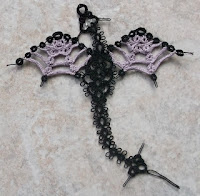 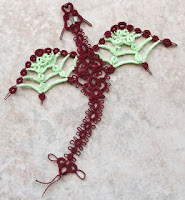 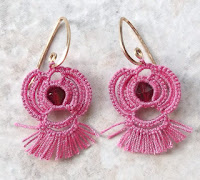 Martha had an idea to make a larger version of Mary Konior's Spinning Wheel design. Her first attempt she thought she would have to work from the long end and although the resultant doily lays flat, it didn't have anything else going for it. After multiple tries she ended up with this one and an appreciation for Konior as a designer. It's a lot harder than it looks to come up with a perfect design. 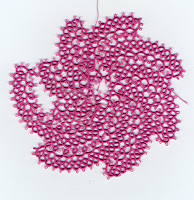 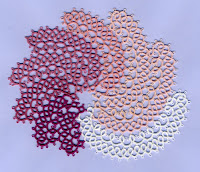 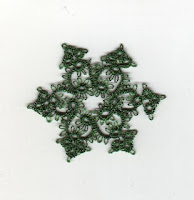 Orsi made a little change to her edging resulting in hyperbolic tatting. 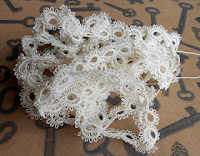 Sharon, I just want to tell you how much I enjoy following this blog. While I don't feel I can commit to the challenge, I really enjoy seeing what others are doing. You've also introduced me to new tatters to follow. Thank you.