Ancolie tatted the beginning of a pattern from Rosemarie Peel with mercerized cotton # 20, but she's wondering if it would have more body in a different thread. 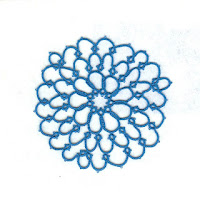 Cindy was working on Medallion II from Jan Stawasz Tatted Treasures, but as she got to the last bit it seemed like she was going to have to stand on her head to get it right. After she walked away from it for a while she came back to it and everything fit into place. 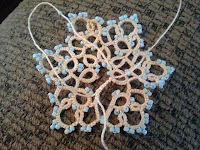 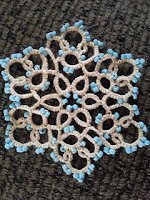 Fox had to give interlocking rings another try. Renulek’s Tat-A-Long continues, just when Fox thought it was at the end and having run out of the red thread, she had to make a big decision, so this is her new colour choice. The hanky is completed in Mary Konior's pattern Marguerite, tatted in Cebelia #30 Blue and Lizbeth #40 Yellow. Here is an Iris Niebach pattern begun with one repeat done correctly. Can you imagine beginning a pattern with a chain and not using a paperclip or pin? The Snowflake Napkin is growing. AGAIN. 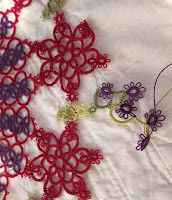 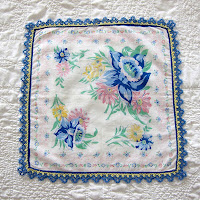 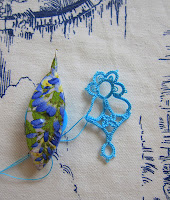 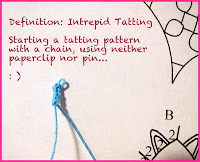 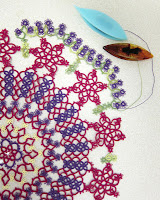 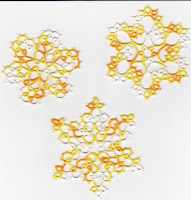 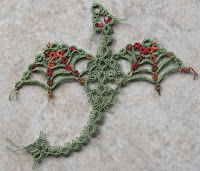 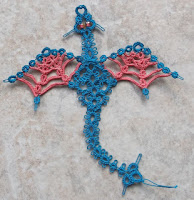 Sue tatted some interlocking SCMRs in Lizbeth Lilac Dk, which looked pretty nifty. So she has done a tutorial with pictures on her blog. 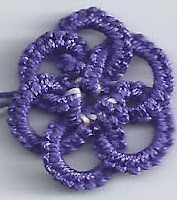 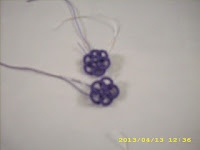 Sharon, I don't leave comments often, but I want you to know how much I appreciate the 25 Motif Challenge. Because of you, I have met many tatters around the world, and I've been inspired to try new techniques, patterns, threads, and shuttles. Thank you!

I too, don't leave comments here either, but I really appreciate the 25 Motif Challenge blog!! It's inspiring and challenging!! :)

Me THREE!!! Sharon, I LOVE this blog + all the wonderful projects. Each time there is a new post, I cannot get it to open fast enough!!!!