Jane tatted Ladytats Daisy and Butterfly bookmark. She made an attempt at interlocking rings, but it seems to elude her. 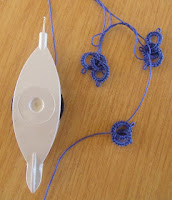 Julie has been working on a quilt, but tatting is just so much more portable when you have to be out and about.

Cindy has been experimenting with a tatted spiral chain and a charm to add to the bag she made. 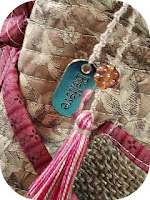 Fox tatted her first design from the Ring of Tatters 2000 book. It's a design by Marjorie Hanson done in DMC Babylo #30. 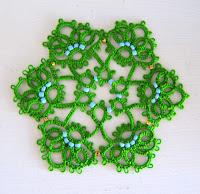 IsDihara attended her lace guild meeting at Barrel Oak Winery and along with the wine there was food and frivolite and friends. She tatted Farfalla which is found on the CHIACCHIERINO web site in Lizbeth size 20 #613 Golden Yellow Medium, a blend of lavender/black/yellow threads for antennae, #139 Fruit Fizz for round 2 chains and #624 Raspberry Pink Medium for round 2 rings. Anita shows her tatted doily

Jess did Julie Patterson's Eye Spy bookmark in Yarnplayer's Stardate size 40 and Purple Iris added a tail and tassel to the Taffilicious and Azalea Pink she did previously. 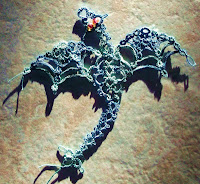 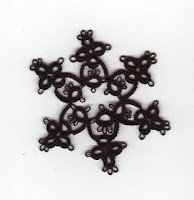