Jane's tatting looks like she's mastered interlocking rings, but it isn't quite right. Another try bites the dust, so maybe this method isn't working for her. 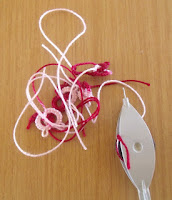 SunshineCraft made this little lace mat for the Malaysian Tatter's group, March challenge, which was to attach tatting to fabric. The pattern is Edging 15 from Anne Orr's Classic Tatting, done in DMC Cebelia 30. 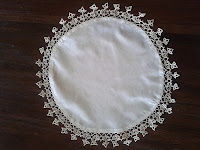 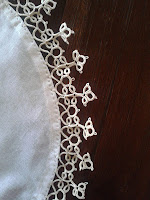 Diane purchased this wonderful little book and it came with a tatted bookmark. She's still working on her niece's hanky, but it's been slow since she restarted attaching the edging several times.

Fox made an attempt at Mary Konior's Windmills, but she just couldn't follow the pattern. Then she found it written in another book and once she had the pattern repeat it was easy and could be adjusted for a larger design.  Interlocking rings... aren't. Karey Solomon’s pattern from Tatting with Buttons used the same blue #20 HDT from Denise and a heavy brass ornament that she found in her stash. 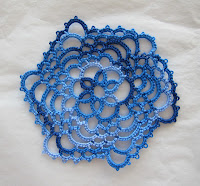 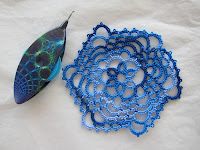 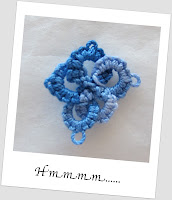 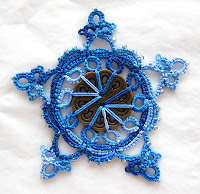 IsDihara has tatted another Farfalla butterfly, this time in Lizbeth size 20 #642 Lilac Medium, a blend of lavender/black/yellow threads for antennae and body and Tat-ilicious HDT by Jess in Night Thunder for round 2. After she had them together, she noticed a section of chain and a picot were missing on the first one. We've all missed a bit on a pattern before. 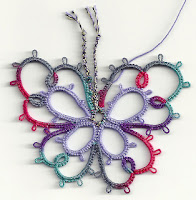 Marie has another dragon for her collection; this one done in Lizbeth, size 20, Autumn Spice. 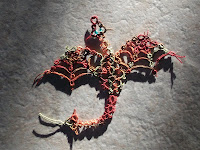 Martha was one of several who participated in Jon's Norma Benporath Lace Mat Challenge. Martha's version won the contest and she has now received a lovely package from Jon. 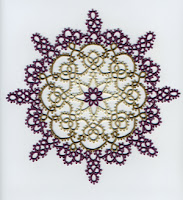 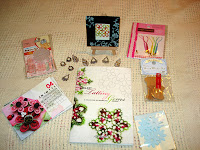 Wanda finished 2 bracelet designs, both are made with Lizbeth Caribbean #122 in size 20. One is done with buttons and the other with silver, six-pointed findings.