Laurie finished the collar she was working on using the pattern from the back of the Learn Needle Tatting by Barbara Foster, working in Lizbeth size 20 thread in #117 Country Side.

Jane is still working with pearl tatting and tatted Mark Myers Elegant Heart. For the next challenge she used Georgia Seitz's Mignonette Stitch Review Lesson, but she wants to get the bare thread spaces equal before doing the split ring for the next round. The idea of making a string of hearts is Gina Butler's but she used folded rings instead of dimple rings and she's thinking of adding beads between the hearts to make a dangle that will hang well. 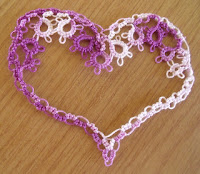 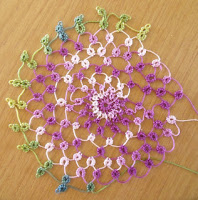 Lelia received this lovely bookmark in the mail from Denise. It's Jon's heart pattern with a row of split rings added to make a bookmark. 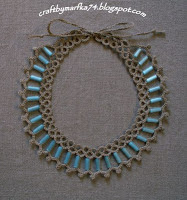 SunshineCraft made a dress for her little one who thought it wasn't fancy enough, so a tatted heart was added using a pattern from Georgia Seitz. 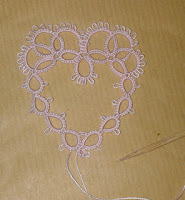 Linda has the second side of the tea cozy done with a tatted heart and a tatted tea pot. 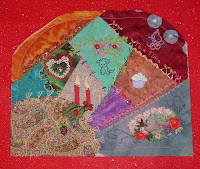 Cindy has Days 10 and 11 of TIAS done to make a lovely baby buggy. 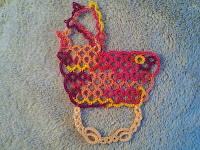 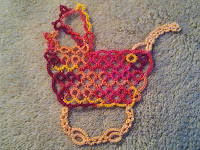 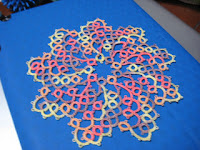 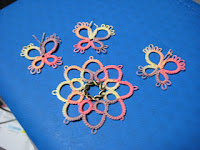 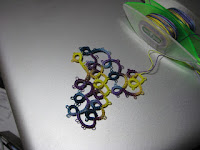 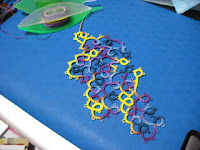 Fox had to snip out a mistake on the Honey Napkin and here's how it looks now. She has decided to add some bright red beads she was sent on this row. Honey Napkin boredom has produced the seedlings of a new design and the desire to work with bugle beads and Victorian Sets. 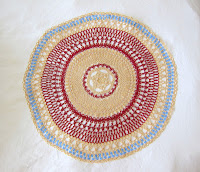 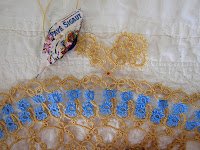 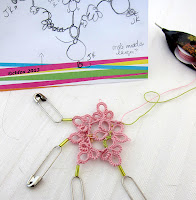 Jess tatted Julie Patterson's Heart to Heart pattern from Just Marking Tome in Taffilicious. She really likes the pattern, so after the first one she did it again in Carnival and on the right a new HDT, Wildberries.

Margaret was asked to make a card with 2 angels and 2 hearts and this was the results. 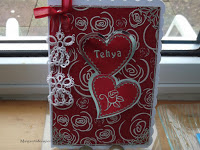 Marie used pieces of a necklace to create this Key to my Heart pendant. Old clip earrings have been re-worked with blue thread to create a new earring set. The flower finding has green leaves tatted in Lizbeth, size 40, jungle green for this pendant. This edging from Tatting by Anne Orr is tatted with size 10, gold crochet thread is intended for a new altar cloth. 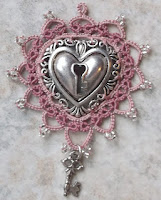 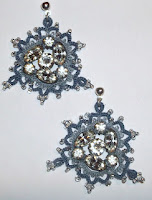 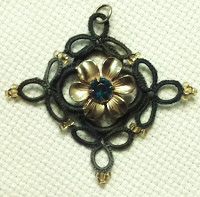 Sue was asked to make 5 tatted crosses for one of the ladies at church to give her children for Easter. The blue is Mary Konior's Large Cross from Tatting with Visual Patterns tatted in LadyShuttlemaker's HDT  Helms Deep size 50. The middle cross is the Heritage Cross by Dee Powell from Tatted Bookmarks Needle & Shuttle edited by Babara Foster Handy Hands,tatted in size 40 Lizbeth Girly Girl and the one on the left is tatted it in size 20 HDT Sacred Lotus from Crochet4U2Dye4. The necklace she was working on is finally finished. 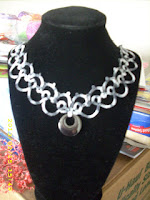 Wanda has overdosed on tatted heart earrings and switched to tatting a decoration for the badge reel with detract able cable that she uses for her scissors. Her TIAS is completed to show another lovely baby buggy. 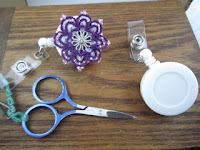 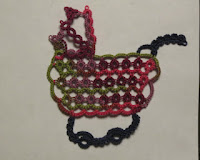