Sharon loves Mary Konior's simple yet elegant designs, like this cross. The shaded ones are Olympus thread and she used a lock stitch chain for the tails. 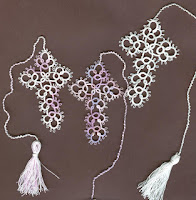 Jane is tatting the second glove making note of where she thinks she can improve it, but tatting it that same as the first glove so that she has a pair instead of a mismatched set. 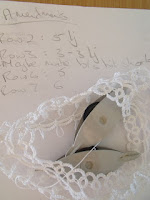 Kristen continues to tat lace that resembles the designs in the carpets she has seen. Here she has added the triangle sections around the earlier motifs. She hopes eventually to have a kitchen that's this exact shade of blue tatted here in Medallion 1169 from Old and New Designs in Tatting: Book No. 11, with an added inner filling. The she started Duet Doily from The Tatter's Treasure Chest where she has got to row 4. She did have a 5 of these designs completed, until she realized that she had joined them at the wrong point and now she's back to only 2 and in need of more thread. 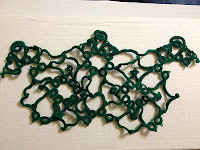 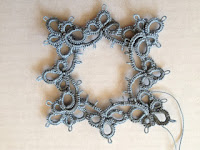 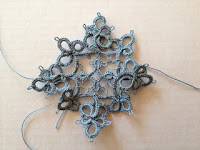 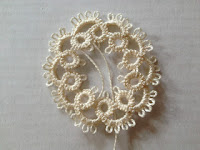 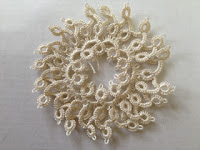 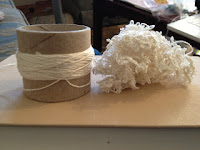 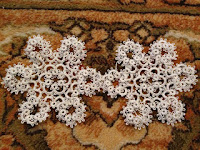 Cindy received some quilts from her Mom and in exchange is making her tatted crosses, like Jan Stawasz' Krzyz from Tatted Treasures. Her Mom wanted one cross for a mother to be, so Cindy tatted one in pink an one in blue only to find out her Mom wanted it in white or ecru so that she can gift it before the baby is born. The pink cross is Elizabeth Zipay's Tatted Cross done in size 20 Lizbeth Tropical Punch and the one in blue is Elva's Cross from Tatted Bookmarks - Needle and Shuttle, tatted in Lady Shuttlemaker's HDT Helm's Deep, size 20.

Diane also tatted Jan Stawasz' Krzyz, but she used a central finding and tatted it in Lizbeth Blue River Glades. She enjoyed tatting this pattern so much she did it again in size 20 Lizbeth Caribbean #122. That makes 5 of the same design she has done. 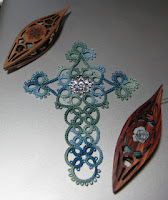 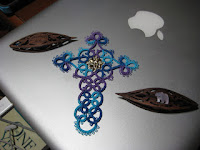 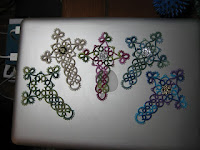 Fox named her new design Happily, for her Aunt who passed away. Her other design is named Elizabeth, with 2 options for completing it. She received an exchange package of thread from Orsi who also sent an exquisite tatted heart. 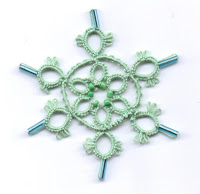 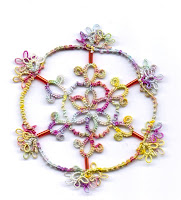 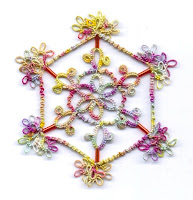 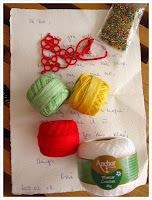 Marie tatting in Lizbeth, size 40, Country Kitchen around a button to make this pendant. 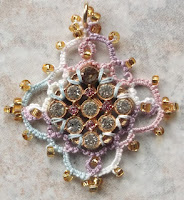 Michelle tatted Peacock heart from Birgit's tatting in Grape Splash. That was followed by Vicki Clarke's ruffled heart which she likes but found frustrating to tat. Betsy Evan's heart she loved, but now she's almost done with tatting hearts. 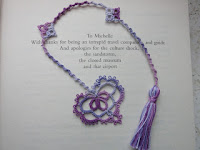 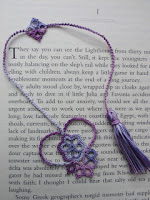 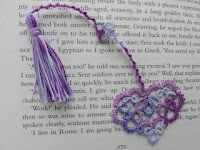 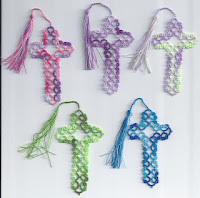