Other things have kept me busy so that I haven't been able to stay on top of things like updating the challenge page. Thankfully both Clyde and Laura have been able to step in and keep things going here while Jeff and Aileen are managing 2 of the round robin groups.
One of our new participants is Wanda and this first motif for the challenge is something she designed for Christmas which she thinks she might be able to work into a doily. Connie posted a picture of an imitation tatting doily done in crochet and here is Wanda's version done in real tatting. The "Colonial Lady Applique" from Aunt Ellen's Tatting Handbook, originally from a Workbasket pattern. The snowflakes from this grouping are done in size 30 DMC Cebelia. The bell is done in size 10 DMC Cebelia and all are original patterns. Next we have an autumn bookmark and Wanda shares the patterns for the tree the bell and the bookmark. These edgings were added to the bottom edge of some magnet boards she made. This latest motif is her first attempt at celtic tatting. 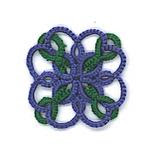 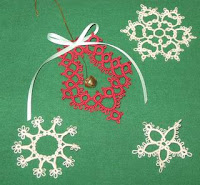 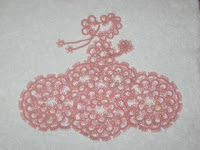 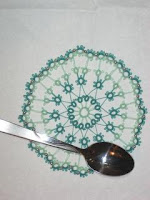 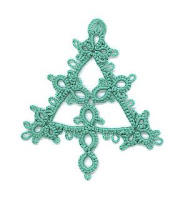 Taffy anyone? Heather has some luscious HDT thread that looks like saltwater taffy. Her other colours are Blue Jay, Pink and Tan, Cotton Candy and Rainbow Cotton Candy. 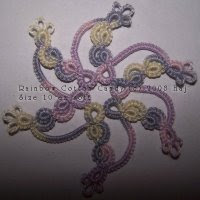 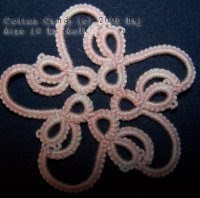 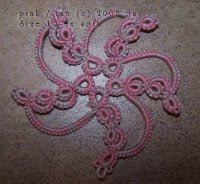 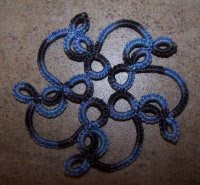 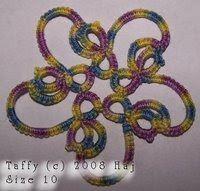 Following the rabbit trail through the internet led Kathy N on a trip through the internet where she discovered the pattern used for the apron on her Victorian doll. It's based on “Tatted Lattice Doily” by Darlene Polachic but has some modifications that were apparently just mistakes that worked out well. So now we know where it comes from. 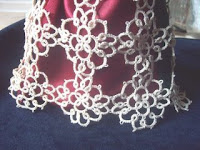 Jeanne is a grandma again. Looks like we have quite a crop of grandbabies making their first appearances.
Tara's gloves won a red ribbon at the state fair, I guess maybe the judges don't know much about tatting. She also finished the baby booties just in time for the baby shower. 6,512 stitches times 2, that's a lot of stitches. When I designed the booties I forgot to write out the pattern so I had to do it a third time just to make sure I had the count right and that's too many stitches to make a fourth so that I have another pair. Any ideas for what to do with an odd bootie? 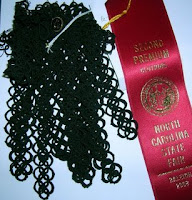 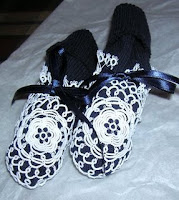 TattingChic received an assortment of tatted butterflies from a giveaway she won and rather than use them on CQ she's going to wear them in the glass pendant case she got at the Lace Day she attended earlier. Her guild had a party to celebrate the anniversary of their meeting place complete with cucumber sandwiches.

Nita tatted the Celtic snowflake designed by Ruth Perry in #20 Flora Thread and now she wants to do it in size 80 thread. 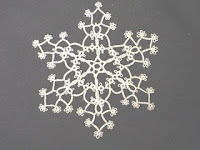 Barbara tatted these leaves in HDT size 20, the Green one is called Forest and she did the stem differently, using the second half of the DS. On the Sugar Plum one she did the first half of the DS and it seems to lay better.

Margaret was without her computer for a while and unable to post what she has done. She tatted two pair of earrings, the butterfly and the dove for the Christmas-in-July exchange, and four yellow butterflies from Altin Basak #50 thread, a shamrock from Altin Basak #50 green thread and a needle tatted heart that she did at the Cambridge Tat Days when she was learning to needle tat but no picture. Then she did a 'bouquet of flowers' for the lady who was her seatmate on the train -- her first design, in yellow Altin Basak #50 thread but as she had no camera there are no pictures. In learning to needle tat she completed a blue butterfly in Altin Basak #50 and a red crochet cotton #10 medallion. So now, she is considering that she has finished the 25-motif challenge. 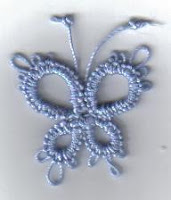 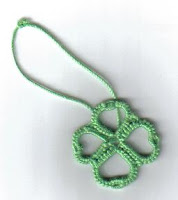 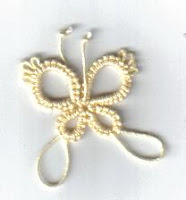 Iris has modified her six star pattern to include a rose centre. I love this design! 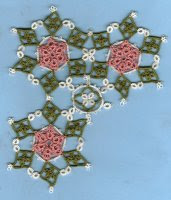 Eliz showed us her blooming trellis bookmark and the pattern is in the links in her sidebar. Now Georgia has a diagram of some of the elements to help out.

Meme has another blog where she shows some of her designs that were included in the wedding magazines, Revista De Novios and Los Accesorios Adecuados. Congratulations Meme. 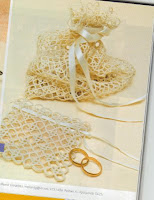 Joy has posted pictures of the snowflakes she is doing for the round robin. Both are done with size 20 Hakelgarn thread. The top one is "Little Ring Snowflake" from Tatted Snowflakes by Vida Sunderman, and the bottom one is "Star with Six Points" from Christmas Tatting by House of White Birches. 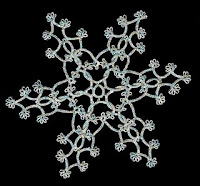 Martha is the lucky recipient of Teri Dusenbury's turtles shown alongside a coin to demonstrate how tiny and exquisite these are.

Have you seen Carol's Jack Sparrow? If not, what are you waiting for, go check it out right now! It's simply astounding.
Diane thinks she's finished tatting Spinning Wheel glass mats for Christmas. The last 2 are HDT Seaweed and Coral Rose.
Gina has been badgered into completing her reindeer started several years ago.
Jon has posted a list of things she wishes she had done, a series of missed opportunities.
Laura has been tatting snowflakes in "Rainbow Bright".
Marilee is in the Nov. 12 "Needlework News", edited by Denise Felton at "Craft Gossip" and she's going to be a vendor in an art fair! She has posted the centre of a new necklace that she might have to tweak a little to give it more stability.
Mark has a couple of new flower motifs for the wedding dress.
Sherry's HDT "Poinsettia" is an all silk batch, very Christmassy and shiny. More "Icicle" is ready, this time with some silk included. "Old Saint Nick" is the first solid batch of hand dyed tatting thread. "Country Christmas" is a custom hand-dyed thread for Diane. One of Sherry's students mixed tatting with pottery, then she designed a fish and another tatted a butterfly.The most recent HDT is called "Swamp Thing".
Snowy remarks that she finds the online tatting community very friendly, encouraging and sympathetic. That's very true, we all try to support one another. Snowy has been trying out some ideas with Sherry's HDT silk threads.
Posted by Sharon at 12:49 PM